It's all gone a bit Game of Thrones in the world of graphics cards this week. Having enjoyed a very comfortable stint on the 1440p Iron Throne ever since it rose to power in February of this year, Nvidia's RTX 2060 was just about to assure its legacy with the birth of the RTX 2060 Super card when AMD pitched up and threatened to go all 'Dracarys' with their new Big Navi GPUs, the RX 5700 and RX 5700 XT. Sadly, I don't have a fire-breathing dragon to help settle this epic battle of 1440p graphics cards, so you'll have to make do with some graphs instead. To the bar charts!

To see how all four cards stack up across 1920x1080 and 2560x1440 resolutions, I've run each of them through my general games benchmarking suite. That includes Shadow of the Tomb Raider, Total War: Three Kingdoms, Final Fantasy XV (without Nvidia's fancy HairWorks, TurfEffects, VXAO and ShadowLibs effects turned on), Monster Hunter: World, Assassin’s Creed Odyssey, Forza Horizon 4, The Witcher III and Metro Exodus.

Paired with my Intel Core i5-8600K CPU and 16GB of Corsair Vengeance 2133MHz RAM, I've seen what each card can do on max settings at each resolution and taken an average frame rate (either from their own built-in benchmarks or from my own repeated manual gameplay tests) to see how they stack up against each other. I've also included results for what they can do on High settings at 1440p, too, as there are still a couple of cases where a smooth, consistent 60fps isn't quite possible with everything maxed out.

The cards in question are the Nvidia Founders Editions of the RTX 2060 and RTX 2060 Super and AMD's Radeon RX 5700 and RX 5700 XT, so each one should be pretty representative of their particular class of GPU. With that in mind, let's get down to some graph action.

It probably goes without saying at this point that all four cards can definitely hit at least 60fps in even today's toughest games at 1080p. Well, almost. Metro Exodus is still a bit of a chore for the regular RTX 2060, but I should stress that this result is from the game's tough dedicated benchmarking tool, which dials every possible option up to eleven for its Ultra preset. As a result, I'm sure you probably could get 60fps in Metro with Ultra quality as long as you tweaked some of the other settings, but I've left the benchmark as is for this particular test to give us a fairer comparison between all four cards. 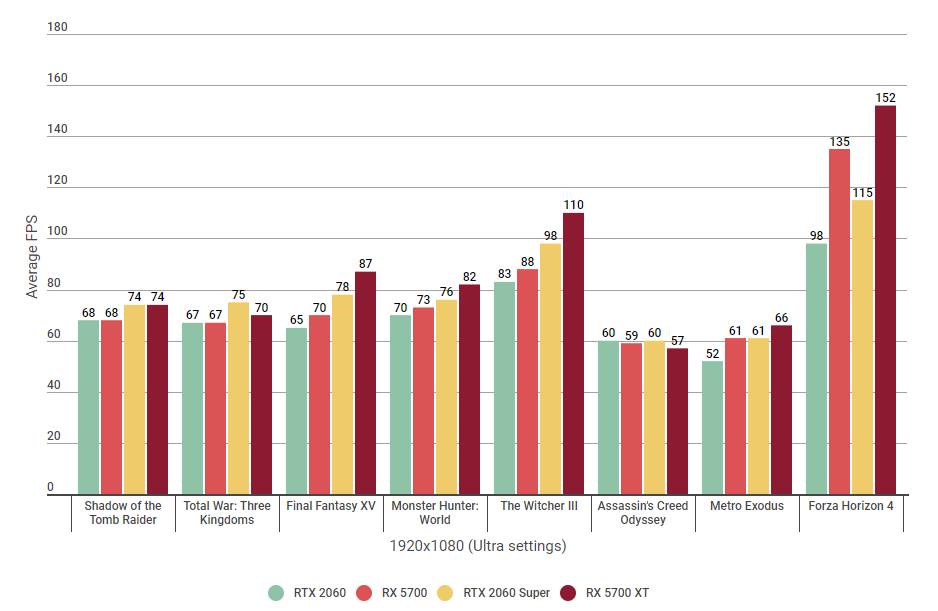 And for the most part, the RX 5700 XT comes out on top here - although there are still a few instances where it's either level with the RTX 2060 Super (such as in Shadow of the Tomb Raider), or just behind it, such as in Total War: Three Kingdoms and Assassin's Creed Odyssey. To be honest, AssCreed is a bit of a weird one all round, really, given how close all four of them are here, but I did re-test this particular game multiple times to make sure it wasn't some weird blip, and yep, they're all pretty much identical.

Still, apart from those tasty 20fps-odd leaps in Final Fantasy XV, The Witcher III and that rocket-fuelled result Forza Horizon 4, I'm not seeing much evidence to warrant spending another $50 on either the RTX 2060 Super or RX 5700 XT at this resolution, as the gains you're getting are going to be pretty difficult to pick out without the aid of a frame rate counter (and also non-existent if you've only got a regular 60Hz monitor).

Sure, the faster a card is now at 1080p, the more chance it has of being able to hit those top speeds further down the line when games get even more demanding, but on the whole, I think both the regular versions of the RTX 2060 and RX 5700 will serve you perfectly well for the foreseeable future. Indeed, out of the two, it's the RX 5700 that will probably serve you best here, as you'll see it's just a tiny bit ahead of the RTX 2060 in everything except Tomb Raider, Total War and AssCreed, where it's neck and neck.

Really, though, you're mainly going to be looking at these cards for their 1440p performance, and this is where things get pretty interesting. Once again, it's the RX 5700 XT that comes out on top overall, but the regular RX 5700 also puts in a pretty good showing here, too. 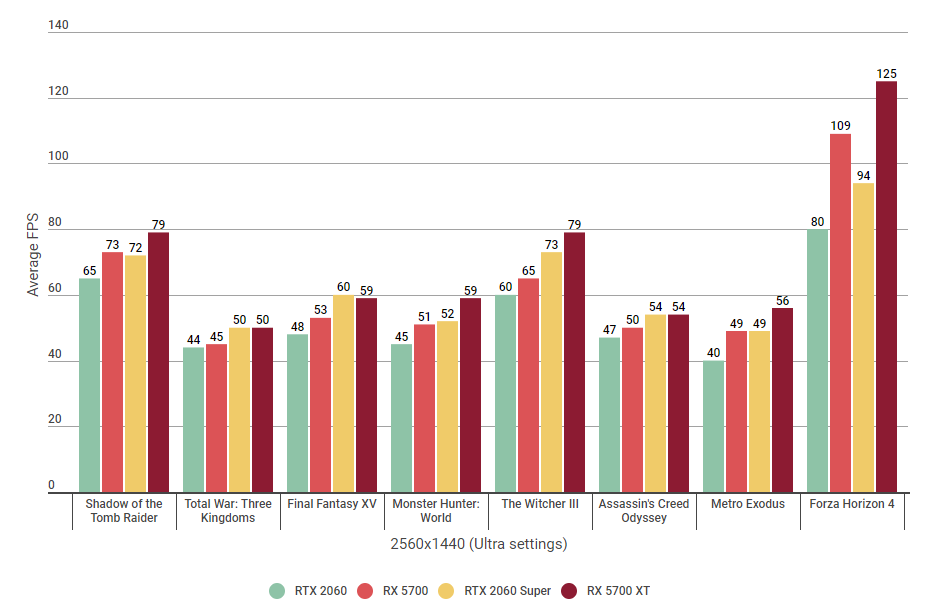 Not only is it going toe to toe with the more expensive RTX 2060 Super in Shadow of the Tomb Raider (with its SMAAT x2 anti-aliasing enabled here), Metro Exodus and Monster Hunter: World, but it also sits very snuggly between the RTX 2060 and its Super sibling in Final Fantasy XV, The Witcher III and Assassin's Creed Odyssey. I mean, we're still only talking a handful of frames here, but when you're stuck milling around the 45-50fps mark, sometimes those extra frames can make all the difference.

The RTX 2060 pulls it back a bit when we drop the quality down to High (see below), maintaining its equal footing with the RX 5700 in Total War and levelling the playing field in both Final Fantasy XV and Assassin's Creed Odyssey, but it still struggles to match everything else in Metro Exodus and Monster Hunter: World. Here, the RX 5700 actually manages to surpasses the RTX 2060 Super in Metro (just), and maintains its hold on the Super in old MonHan, while the RX 5700 XT is even further ahead. 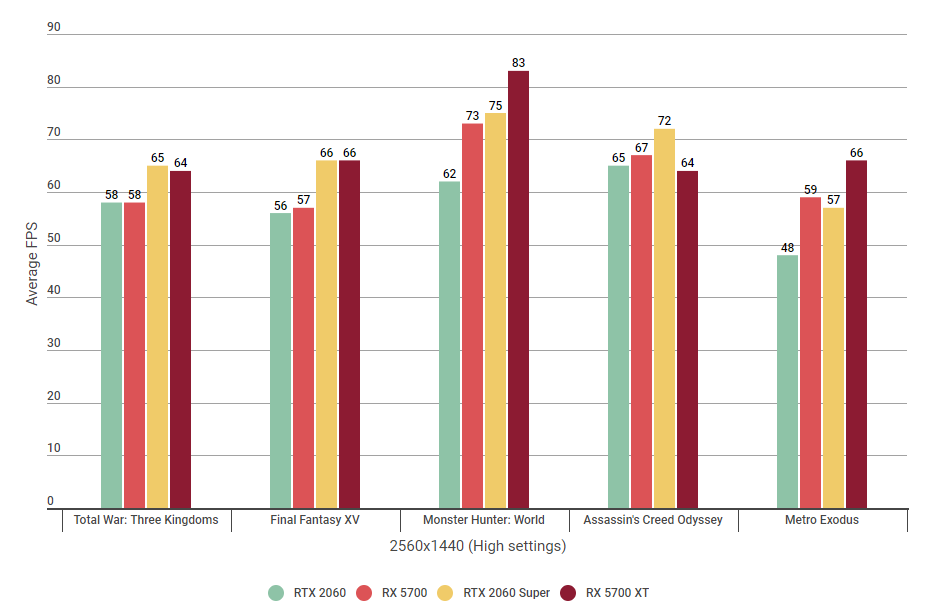 On the whole, though, I'd say it's actually the normal RX 5700 that impresses me most at this resolution. Sure, it's not quite as quick as its XT sibling, but it's still capable of hitting 60fps at this resolution on either High or max settings, and I'm not sure my eyes are quite good enough to appreciate the difference between 58fps, say, and 64fps.

As a result, if I had to $350-400 to spend on a graphics card, I think I'd probably opt for the RX 5700. I'd definitely pick it over the identically-priced RTX 2060, and while it never quite goes full 'Dracarys' on the RTX 2060 Super, I reckon it makes enough dents in its chrome-plated armour to erode some of its appeal. The RX 5700 XT, on the other hand, becomes more interesting when viewed in the context of Nvidia's RTX 2070 and RTX 2070 Super, and I'll be doing a second load of comparison graphs about that tomorrow.

Out of the four challengers to the 1440p throne, then, I think the RX 5700 is almost definitely the one that offers the most value for money - especially if you're perfectly content with High settings at 1440p instead of maxing everything out.

That said, it's also worth pointing out at that neither the RX 5700 or RX 5700 XT have any ray tracing support, so if you've got a hankering for the bestest, most realistic shadows and reflections, then there's simply no question but to go with Nvidia - in which case, it's probably worth stretching to the Super if you can afford it, as it's only going offer better speeds when you've got ray tracing enabled.

Personally, as much as I'm a fan of how ray tracing looks, I'm still not entirely convinced there are enough confirmed ray tracing and DLSS games out there to really justify jumping on the RTX bandwagon right now. Remember, there are still only half a dozen games on that list that have actually implemented their ray tracing / DLSS support at time of writing, and there's still no word on when a lot of the others will be adding it in, either. Sure, there will almost certainly be more ray tracing games coming out over the ensuing months (and no doubt years that you'll own this particular graphics card), but let's put it this way - I've yet to see a ray tracing game that has convinced me 100% that I absolutely need to buy an RTX card right this very second. Metro Exodus came close, but its ray tracing is also so intensive that you really need something a lot more powerful than either the RTX 2060 and RTX 2060 Super to do it justice - and then you're getting into silly money territory, too.

By all means knock yourself out with an Nvidia card if you do want to give ray tracing a go, but at this price range, I wouldn't say it's an essential part of what makes these particular cards so appealing. Instead, it's that raw 1440p performance for me, and looking at the numbers, I'd say AMD's new Navi GPUs have a much stronger claim to the Iron graphics card Throne right now than old Nvidia's lot.