When Oculus launched their original Rift headset back in 2016, I was one of those people who was firmly in the HTC Vive camp. Back then, I just couldn't see the appeal. The Rift didn't do proper room-scale VR, it didn't come with any motion controllers, and it was just as much of a faff to set up due to its external sensor. Fast forward to 2020, though, and how the tables have turned. As much as I like the idea of what the current HTC Vive Cosmos is trying to achieve with its modular faceplate design, it simply isn't as good in practice as the Oculus Rift S, making this the VR headset to buy if you don't have north of a grand to spend on something like the Valve Index.

The key attraction of the Rift S is just how easy it is to set up. Thanks to its inside-out tracking, there's no need for external sensors anymore, and you don't even need to find a plug socket for it like its HTC Vive Cosmos rival. Instead, all you need to do is connect the headset cable to a spare DisplayPort and USB3 port on your PC, download the Oculus Rift S installation software and you're off. It's exactly what owning a VR headset should feel like in 2020 - simple and hassle-free, without anything getting in the way of playing your favourite games.

Indeed, I haven't had any problems getting the Rift S to work with SteamVR over the last month or so since I've had it in for testing, and I've been able to use it in all lighting conditions, even when it's been super sunny outside and I've had the curtains open, or at night with the lights on - which is something I can't say for the HTC Vive Cosmos. 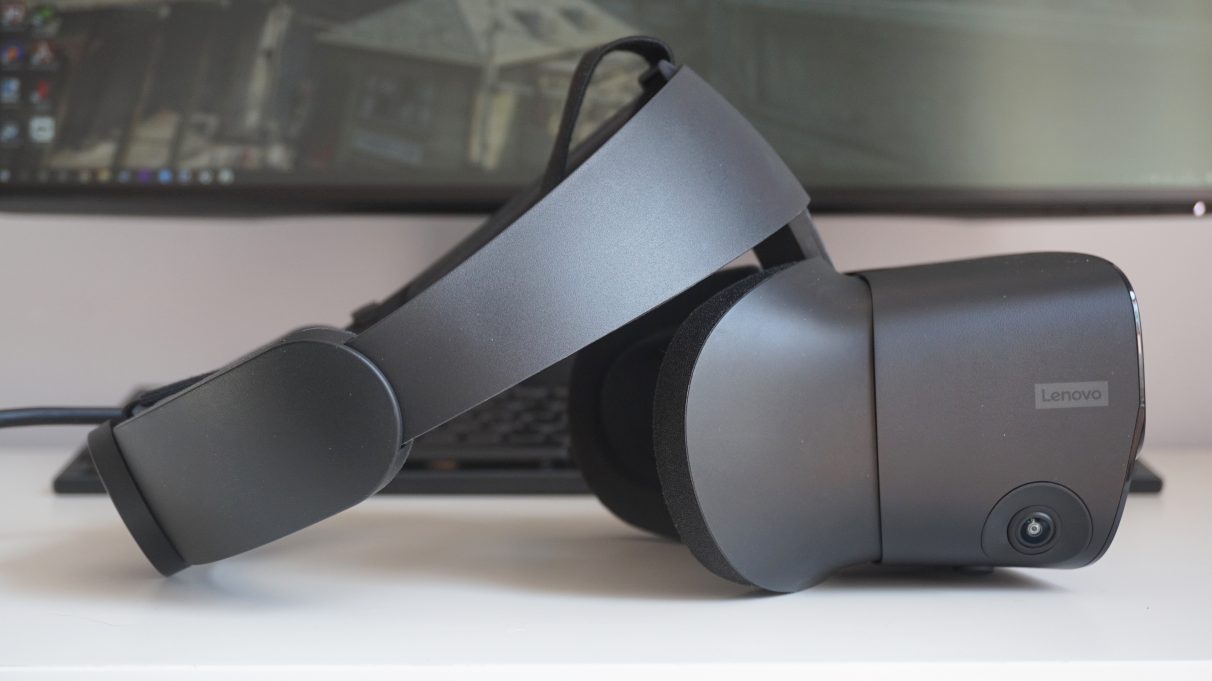 Sure, the Rift S doesn't have quite as high a spec as the Vive Cosmos. The resolution on its LCD display only stretches to 1280x1440 per-eye, giving it a total of 2560x1440 (down from the Vive Cosmos' 2880x1700, and its refresh rate is capped at 80Hz rather than 90Hz. In practice, though, the Rift S was practically indistinguishable from its Cosmos rival. The display looked just as sharp to my eyes, and its colours looked equally rich and vibrant, too.

There's still a very mild porthole effect around the very edge of the display, but I never found myself feeling nauseous due to its slightly lower refresh rate. If anything, it felt exactly the same to me, although that may be because my RTX 2070 Super graphics card was likely maxing out both headsets. It's possible you may feel it more keenly if your PC's a bit older and only just about meets the recommended PC requirements for the Rift S, but on the whole I think most people will get on with it perfectly fine.

In fact, the Rift S' inside-out tracking often felt a lot more accurate than the Vive Cosmos, which actually made the overall experience of playing games in VR feel significantly better. While the Cosmos sometimes caused my hands to drift or the whole world to judder due to lighting problems, the Rift S didn't have any of these issues whatsoever. In fact, I'd even go as far as saying it felt just as precise and immersive as the Vive Cosmos Elite or Valve Index, both of which use external trackers to replicate your movements instead of cameras and algorithms. 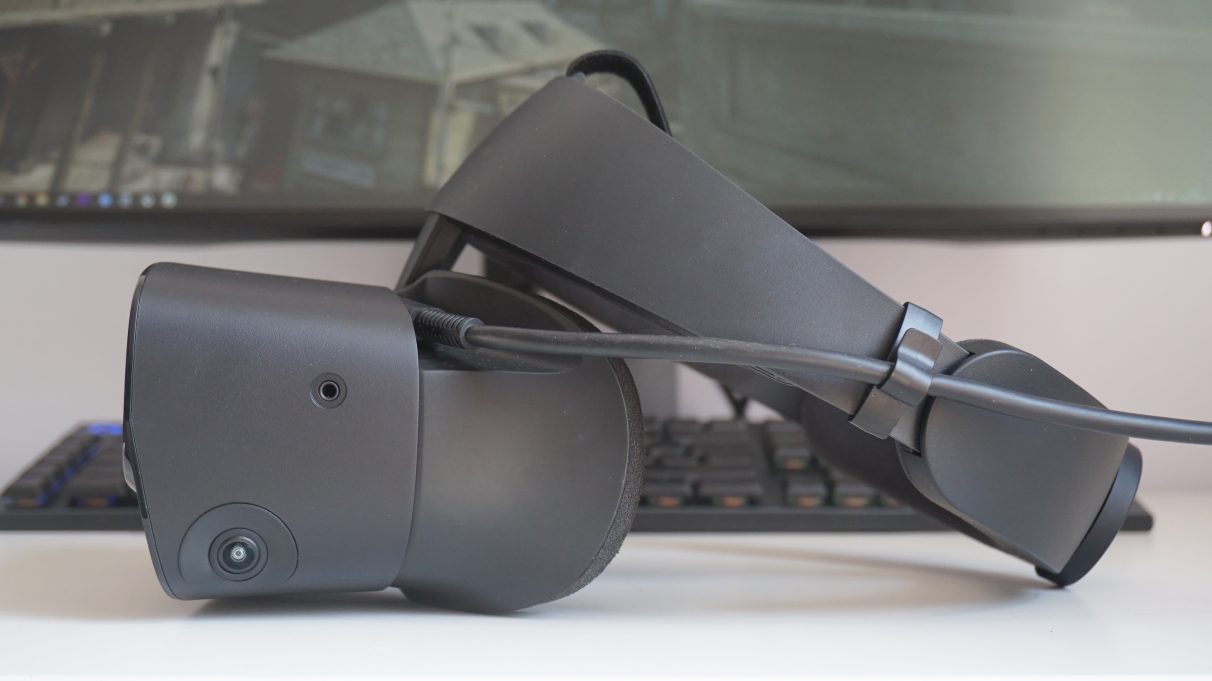 It's impressive stuff for a £399 / $399 VR headset, and the Oculus Touch controllers were just as much of a treat to use as well. They don't provide quite the same level of finger-tracking as the Valve Index controllers, all told, but they're much lighter to hold and more pleasant to use than the Vive Cosmos controllers. Their smaller size was a more natural fit for my hands, and I never felt like I was floundering when I moved my thumb from the face buttons to the analogue stick. The buttons have more tactile feedback, too, making them a good fit for fast-paced action games such as Half-Life: Alyx as well as more sedate experiences that don't require such fine motor control.

I was also impressed by the Rift S' internal speakers as well. I was perhaps a bit harsh when I said they were a bit weedy in my Best VR headset for Half-Life: Alyx article. Sure, they're not as rich or full-bodied as the Valve Index's built-in headphones, for example, but after a couple of hours playing Half-Life: Alyx over the weekend, they were surprisingly immersive - more like decent PC speakers rather than the tinny, token efforts you tend to get on a laptop, for example, but you can always had a proper pair of headphones if you prefer by connecting them up to its 3.5mm audio jack on the side.


The only thing I really miss from the HTC Vive Cosmos is the amount of adjustment it offers. The Rift S doesn't let you adjust the interpupillary distance between its lenses, for example, and its halo headband dial isn't quite as taut as its HTC rival. The former isn't a particularly big problem, as the Rift S still lets you move the display closer or further away from your face to help mitigate this problem, but the dial just didn't provide as tight or secure a fit as the one on the Cosmos. It's easy enough to get it onto your head, as the dial offers plenty of leeway at the wider end of the head size spectrum, but when it came to tightening the headset, the dial would sometimes slip back to the next largest adjustment position, making the headset feel a bit loose.

This may be due to the fact that my particular review sample has probably had a bit more use than the Cosmos I was sent for testing (the Touch controllers Oculus sent me both had bits of duct tape holding their battery cover in place, for example - the ones pictured are the brand-new pair that came with the Oculus Quest), but it's probably more likely that the Rift S just isn't quite as accommodating for people with smaller heads, or, indeed, those who have longer, shinier hair than your average PC gamer.


Thankfully, it didn't have too big an impact on my overall gaming experience. Whenever I noticed the screen going a bit fuzzy, for example, I usually only had to shuffle the headband back a bit slightly to bring everything back into focus. A bit of a pain, yes, but it was never particularly intrusive in the grand scheme of things. After all, the headset was never so loose that it felt like it would fly off my head the next time I did a sharp turn, and it also meant I never had a splitting headache afterwards, either. The foam face cushion often made my face feel quite hot and a bit sweaty at times, but I'll take that over a tension headache any day of the week.

The Oculus Rift S gives you the best of both worlds when it comes to the games, too. As well as having the Oculus Store and every SteamVR game at your disposal, you can also access a select number of titles on HTC's Viveport store as well. Not all Viveport titles are compatible with the Rift, admittedly, so you don't quite get the complete spectrum of everything VR has to offer, but it arguably has the biggest and most diverse library of games available across the three main headsets. Besides, while most of the best VR games are multiplatform, there are a couple of Oculus exclusives such as Lone Echo, The Climb and Robo Recall that are really quite excellent and a cut above what you'll find on Viveport.


Overall, then, the Rift S is definitely the VR headset to buy if you don't want to spend upwards of a grand on the Valve Index. Its inside-out tracking is both more accurate and easier to set up than the more expensive Vive Cosmos, and it's a lot more comfortable to use, too. Annoyingly, it's currently out of stock almost everywhere right now - Argos report to have 'limited stock' in the UK, but is highly dependent on where you live - but it's definitely worth waiting for if you've been thinking about getting a headset lately. The Valve Index may be the gold standard for VR headsets right now, but the £399 / $399 Oculus Rift S is definitely the next best thing.