Platform shooter Copy Kitty's offbeat design, quirky visuals and remarkably technical gameplay may give it niche appeal, but I apparently fit perfectly into that niche. I've found myself coming back to this one for years on end, constantly impressed by developer Nuclear Strawberry's creativity and drive. Today, after what seems like an eternity in production (and two years in Early Access to cap it off), the final version of the game has been released along with an updated demo. Fans of Japanese studio Treasure's unique style will find themselves right at home here.

Who here remember's Treasure's classic Megadrive/Genesis platform shooter Gunstar Heroes? The weapon system from that was a joy, where every combination of two weapon pickups would result in a third, hybrid attack. Copy Kitty goes deeper. Not only are there significantly more basic weapon types, but almost every combination of two or three different base weapons results in a unique hybrid shot. In short:  Hundreds of guns, many of which are spectacular screen-filling, particle-spewing apocalypse machines, and immensely satisfying to use.

While you'd think that would result in a mindless action game, Copy Kitty is also a game of resource management. Every weapon has an ammo limit, and every combination shot takes one ammo from each of the three ammo pools being used. On top of that, some levels are more puzzle-centric, some enemies have resistances or shields, and bosses in particular (and there are a LOT of bosses) require you to focus on evasion until you've gathered enough ammo to properly return fire.

As if that wasn't enough complexity, there's an unlockable second character with completely different gameplay mechanics, story, a whole new set of weaponry and even some unique levels. Considering there's around 120 basic stages plus a bunch of optional stuff and an endless survival mode with its own unique baddies, there's a lot to chew on here, and a ton of imagination. Each world feels fresh, with one world being a glitchy teleport-maze full of mashed-up hybrid sprites, and the medieval themed world introducing a whole new set of melee-centric weaponry that can be triple-wielded. 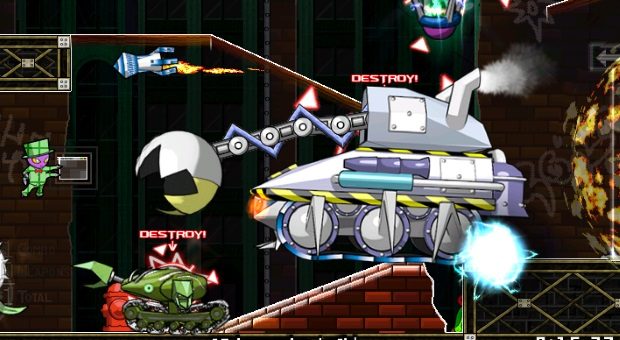 There's a real learning curve to Copy Kitty, and initially it will feel stiff and limiting. But by the end of my first playthrough as primary protagonist Boki, I couldn't help but draw comparisons to Platinum's particular school of game design, whereby every single fight is a secretly taught lesson in game mechanics.  I was bouncing off the walls and cleaning out hordes of enemies without even thinking what my hands were doing, and the later bosses in story mode are fantastically satisfying multi-stage throwdowns.

The final release of the game adds the final, 12th world to Story Mode, as well as a bunch of new mid-bosses added to earlier worlds. Knowing Copy Kitty's developers, I would also hazard a guess that some secrets are waiting to be found as well, although I doubt there'll be anything quite as massive as the hidden world already in the game. Sadly, the game is locked to 4:3 aspect ratio. While it's generally smart about pillarboxing the image in full-screen mode, this one's old-school vibe runs more than skin deep. Naturally, a good gamepad is recommended, but keyboard is fine enough to play on.

You can get Copy Kitty via Itch.io (which gives the developers a significantly larger cut, and includes a Steam key) or direct from Steam for £11.39/$15. There's also a generously portioned demo on the Itch.io store page for the game.