Jason Rohrer, he behind RPS favourites The Castle Doctrine, Cordial Minuet, and Sleep Is Death, has his new game out today - One Hour One Life. And this time he's taking on, well, all of humanity?

The premise behind One Hour One Life, announced in 2016, is that you play, and you'll never guess, a character for one hour that represents their whole life. And so will everyone else. A shared persistent server, in which every person playing sees a character through their sixty year lifetime, one minute per year. 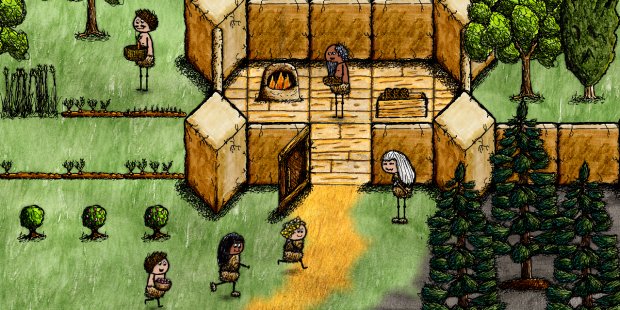 Born into the world as a baby, for the first few minutes you'll be entirely dependent upon other players playing as your parents, but then quickly grow up, have children of your own, and maybe even grandkids, and along the way try to develop, build and advance society in your own small way. After your character's hour is up, you'll hopefully have left a legacy, whether its further generations, or your small contribution to the furthering of society. It's all better explained in this video:

The idea appears to be to create a place in which players are driven toward altruism, knowing that what they're working on, the result of their playing, will likely never benefit their character, but rather later generations. And Rohrer has grand ambitions for those generations, the game intended to evolve over many weeks. The game's tech tree, says Rohrer, will take "hundreds of generations to explore." In the meantime, each character you play is going to have to eat, explore, and not get killed, whether that's by rampaging wild animals or laser-wielding robots.

Which all sounds a very interesting concept, although one that is going to be very dependent on not only a large uptake, but also people sticking around with the game for weeks to come. Which is something Rohrer's making a lot more difficult for himself by distributing the game exclusively via his own site, and not via Itch, GOG, Steam, Humble... It also sounds enormously heteronormative, and along with that, extremely focused on the notion of breeding for validity. It'll be nice to see if the game when released allows players to opt out of that cycle and focus elsewhere. I guess we shall see.

It's $20 to find out, as I say, only via the game's site, which seems a bold choice. We'll likely get back to you with more thoughts when we've played it.