In Introversion's upcoming hard sci-fi colony sim Order of Magnitude, Earth has been destroyed by an extinction level comet hit. It'll be your job to oversee humanity's attempts to rebuild as we fragile fleshsacks spread throughout a realistically simulated solar system, complete with accurate orbital models for every celestial body. There are tentative plans concerning intercultural conflicts and moral conundrums, where you'll have to confront the harsh reality of surviving both intense radiation and hostile colonists.

In the hour long preview build I've played, the main thing I confronted was an intimidating array of buildings and resource processing recipes. I spoke with programming lead Chris Delay and managing director Mark Harris, and while their vision for what OoM will become is an exciting one, it's not clear yet how the human element will sit alongside the scientific detail.

The demo kicks off immediately after the destruction of Earth, and tasks you with setting up shop on the moon. Algae farms, concrete silos and CO2 processors are among the first buildings that the tutorial instructs you to construct, and it's worth noting now that a tutorial is really all that the preview build I played contains. I didn't make an decisions beyond where to put stuff, and while that positioning might have consequences down the line, for now it's essentially irrelevant. I can see why the demo I've played, which is the same one that Introversion showed off at Rezzed, is set up that way though: without being told exactly what I was supposed to do, I'd have been utterly lost. 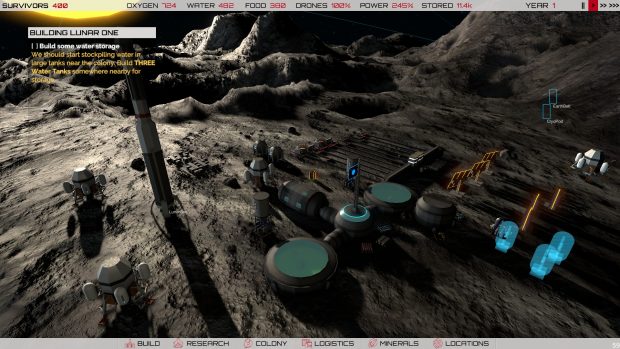 It did, however, make it tricky to see why what I was doing actually mattered. There's an inevitable sense of separation, playing an unfinished build at a show, knowing that I would abandon the base I was building. Even with that in mind though, Order of Magnitude has a long way to go before setting up a colony will feel like more than going through the motions to me. The tech is all heavily grounded in real world science, and there's a danger that some will find it suffocating. As I put it to Chris: while I find the science exciting on one level, there's something about seeing a long list of mineral processing options that kills that excitement cold. Is he aware that's a problem?

"Yeah, because Mark tells me about it all the time! Mark’s always like 'stop bashing people over the head with the science, for god’s sake!' (laughs) At the moment I think it’s a fair criticism that the Rezzed moon demo is very railroaded. It’s all 'do this science process, and this science process', you don’t have any choice. To some extent that’s because this is the first time we’re showing this to people, we need to see how people are responding - though the science part is kind of a key part of it, because the science stuff is absolutely fascinating to me!"

Plenty of OoM's future is hazy, but one thing is clear. If you want to dig down into the granular details of extra-Terra survival, Chris has you covered. "We had someone come in on Friday who was a PHD level chemist, and he was saying 'why didn’t you do hydrogen reduction of regolith?' So we had this long geek-talk conversation about how we do, but that process is way too hard to drop on players right at the start of the game! It’s more efficient and it’s there later on - we actually started out with it and the game was far too hard, but in this build, we wrap up a 3 or 4 stage complex process in one and just make it a recipe that the player doesn’t have to think about." 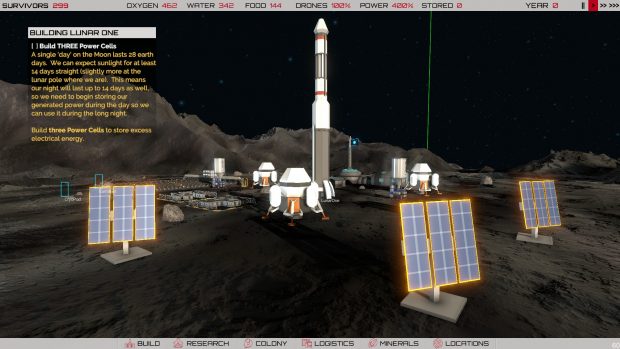 Introversion say they hope to accommodate players who don't want to plunge into the deep end of complex chemical processes, but I'm wary of how tricky a task that might turn out to be. Mark is keen to compare the end result to Prison Architect's.

"With PA, there are pages and pages and pages of things that you can do, and some players go right down into the weeds - and other players don’t bother. I want to have that in OoM as well: if you really want to optimise this process to be the most energy efficient colony that you can get, that’s fine. Alternatively, it could be almost like 'just stamp down your food supply' and as long as you’re vaguely keeping it ticking over, you’ll be fine."

The problem is that success still seems like it will be inevitably tied to understanding processes and resources that are so dry I'm not convinced I'll find them interesting. Whatever the game may become, building and managing infrastructure is still going to play a central role - engaging with that part of the game will be vital, and I'm not yet convinced that I'll want to. 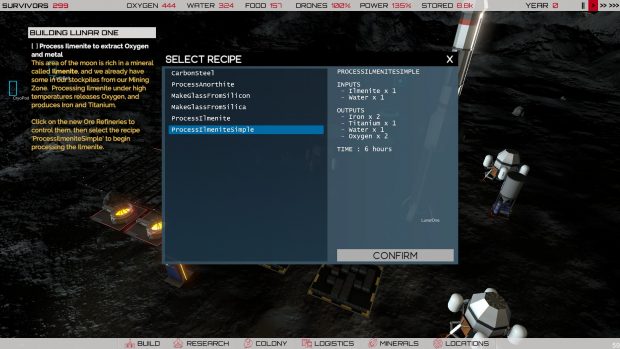 That's an unhappy thought, because the systems that Introversion are yet to build sound fascinating. The preview build includes a colony management screen that lets you choose policies like banning religion or imposing martial law. Though those levers don't currently do anything, Mark has big ideas about how those systems might develop.

"When we're talking about religion specifically, within your colony that’s not going to make a lot of difference. But we talk about colony dynamics quite a bit. So if you’ve got a base on the moon, and you build another base on the moon, and those become separate and one develops along one religious theme and the other develops along a separate religious theme, those two colonies are likely to become hostile to each other."

"We love that idea, that you’re trying to protect humanity [against itself]. Let’s say you build a new water supply for one of the colonies and don't build a water supply for another colony. Because they’ve not got it and the other people have, they launch a raid to go and fuck up the water."

The impact of forced, low-tech space colonisation on human society is exciting territory to explore. It's here, where our chat turned away from nitty-gritty science and towards the human side of OoM, that my interest in the game was rekindled. I still think it's unlikely that managing a human population will make up for those fiddly fundamentals, but I'd love to be proven wrong. 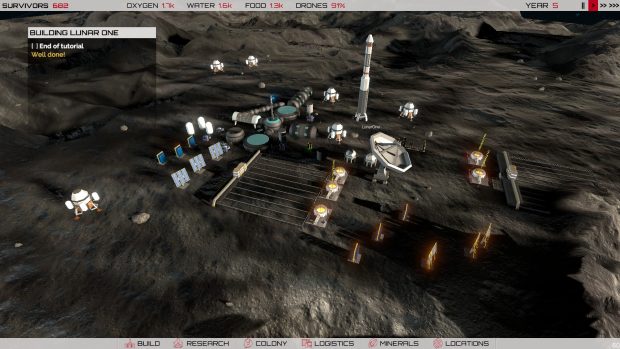 Chris mentioned that at one point they were "trying to work out ‘what’s the most critical thing that you could take with you on a spaceship?’ Is it going to be the declaration of independence, or is it going to be all of 20th century music on a disk?". It's a compelling question, but I don't know how that'll translate to a compelling game.

Nor do Introversion, at this stage. They know that how you build your colonies will affect how your colonists behave, but Chris was quick to emphasise that many of their ideas are "like towers in our own minds that we build up of what the game’s going to be - none of it really exists yet." It's worth bearing in mind, too, that Introversion are keen to get the game into alpha so they can build up a playerbase and get their input on which direction to head in.

I asked if they're wary of letting their community determine too much, when those opinions will come from players that are already committed to the game. "We’re fairly militant about that", said Chris. "You can find out from the community if something doesn’t work very quickly, but they can’t tell you what to do that will work."

Mark compares their position to being on the bridge of an oil tanker, while the community pilot little tugboats. "Every now and then they all line up in one direction, and then the ship moves because we realise we’ve made a mistake, or they've got a really good idea. If you think about a five year development cycle, if you move the direction of the ship in the first few months, where it ends up is a long way from where it started. So the players that come onboard with us early really will influence the direction that the game ends up going, even if me and Chris aren’t directly going ‘what do you wanna see?’" 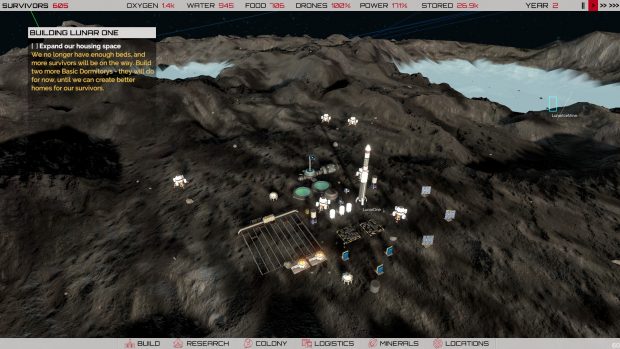 While the sociological side of OoM is yet to form, Chris did mention some systems that aren't in the build I've played but are "sorta working". You can research fuel parts, engines and navigation modules to build rockets of your own design, with the aim to "accomplish different missions, and then start pushing out towards the rest of the solar system." The moon is merely where the game starts, and moving out will be a "survival imperative". It's likely that an understanding of real world science will help with that in a similar way to those oxides from earlier on, although Chris reassured me they're not going to go "full Kerbal on that one".

There's a part of me that relishes the idea of playing a game with so many moving parts, where I can dive into micromanagement decisions that ripple up have broad, interplanetary social consequences. That Kerbal quote, though, brings a worrying thought to the fore. When introversion are attempting so much, the end result could easily end up not being a full anything. I pointed to Kerbal, Surviving Mars, Frostpunk and Stellaris as examples of games that revolve around different elements that Introversion are hoping to simulate in detail, and asked Chris if it was a concern that they'd bitten off more than they can chew: "Yeah. Yeah, it really is, we’re terrified." 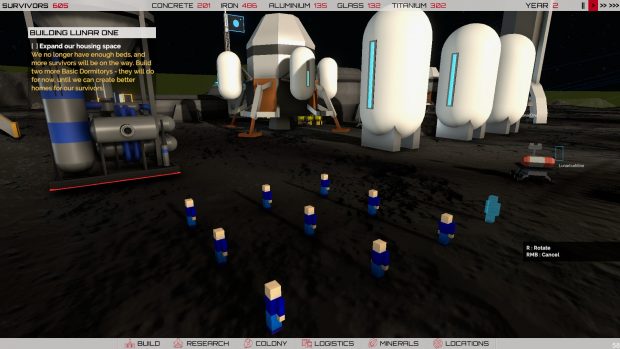 Whether I'll want to play OoM over any of those games will hinge on whether it can bring all those parts together in a way that's actually fun. As Chris puts it, "Stellaris is great at galaxy size, and other games are great at doing a colony in a place and that’s the extent of it. I can’t really think of anything that goes up between both."

Is that because it can't be done? "It could be, and it wouldn’t be the first time that we’ve tried to make a game that can’t be done! We can remember Subversion for that one, one of our earlier failed projects. We’re a very experimental company, and we like to try stuff that’s a little bit crazy."

Mark mentioned earlier on in our chat that they don't actually plan on "going galactic", though I still can't help but feel Introversion's plans are overambitious - especially when my impressions of colony building so far have been less than stellar. With that said, this is a game with the tagline 'rebuild humanity in space', and as Mark pointed out, "there's no humanity in the game at the moment". It's possible that the human element will reframe that mineral extracting and CO2 converting into a satisfying puzzle rather than a chore. 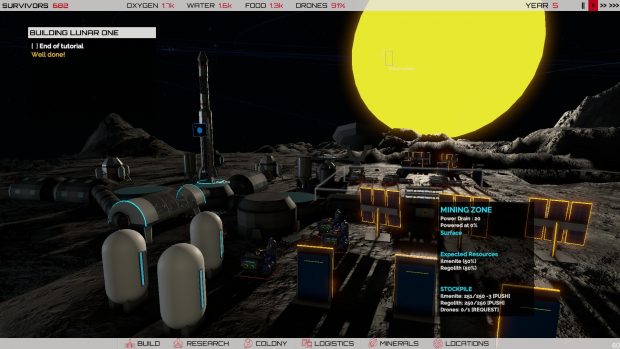