It's fair to say that the boss fight with Kwolok is one of the sadder encounters of Ori And The Will Of The Wisps. As a sage-like figure, Kwolok guided Ori in this strange land, but now he's under the control of a big tentacle monster. It's not a fun time, but he does have a Spirit that you need to complete the quest and we'll tell you how to get it.

Ori And The Will Of The Wisps Kwolok guide

It feels a bit like that infamous part in Old Yeller, but someone has to deal with the rampaging toad. This guide will go through all the phases. There's a chase sequence to begin things, then the true fight begins, with the battle even going underwater after a while. He's a surprisingly difficult boss if you're not prepared for the sheer number of attacks.

As soon as it is revealed that Kwolok is now under the control of the tentacle monster that pursued you during the Wellspring chase, you need to run away once more. Here are the steps to get past this chase sequence. 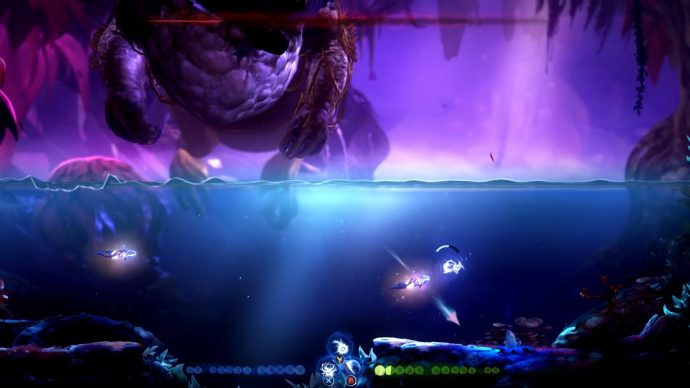 Running into a dead end, Kwolok will now begin attacking you. This is where the sole checkpoint is in this boss fight, so get ready for an endurance fight.

You will need to hit Kwolok rather than the tentacle monster to defeat them. The first attack will always be a slam onto the ground. If it is in the middle of the arena, it reveals some deadly spikes. They're at their most dangerous in this phase, so watch out as you leap from side to side. Thanks to the user "FeepingCreature" who points out that if you don't stand in the middle during this phase, Kwolok will never destroy the spikes.

My top tip for this phase is to stay above five energy cells if you can for healing at the end of this phase, but have the Light Burst or Spirit Arc equipped. The Light Burst is particularly effective against this boss as the burn damage will keep ticking away between shots. As you can see in the video at the top of the guide, this does a devastating amount of damage.

Kwolok has a lot of unique attacks, so let's go through the ones he can do in the first phase.

When his health is around half health, the tentacle monster will force Kwolok to rain water into the chamber with a sickly cackle. This is bad news because it means that healing using Regenerate is now impossible. If you want to restore your health, try to do so as he floats towards the middle and as he's looking down. It's also worth noting that the right-hand wall is now spikes, so not good for avoiding attacks.

The water will increase your mobility, but also means that you need to get crafty when attacking. Luckily, the energy crystal can still be burst by dashing underwater into it. This is the phase where I recommend firing fire arrows to attack him rather than go for melee attacks. His attacks also have a few additions.

Also, and this is a top tip for this boss, make sure you keep an eye on how much breath you have left. If you need to surface sharpish, use the dash skill to rise above the water to grab air quickly. Once he's defeated, climb the wall to the left, then the vines until you find Kwolok.

With another Spirit obtained, it’s off to another area to fight another boss. If you have all of them, then you can make your way to the large door in the Silent Woods for the final showdown. We have more guides readily prepared below that cover all sorts of things, from the locations of life and energy cell fragments, builds for Ori's skills, and tips for boss fights and chase sequences.