Raise the purple flag, comrades. PlanetSide Arena came out yesterday, bringing some royale to PlanetSide 2’s vast battles in a spin-off game of jeeps and jetpacks. Its big thing is that everyone has a quad in their back pocket, but another major draw are the big 12-person team battles. That’s in keeping with the scale of the bottomless futurewar, but is it as shooty and adrenal-gland-taxing as other battle royale games? Sin and Brendy crash landed on the murderplanet and joined some big fights to find out.

Sin: I kind of want to play it some more. That probably means it works, right? But then I could also go for getting back into Planetside 2, which wouldn’t frustrate me as much by not letting me be a cunning and sexy Infiltrator like back in the day. Which raises the question of who it’s for. Planetside 2 players? New players? I suspect the latter. And I don’t know how much people will want it. 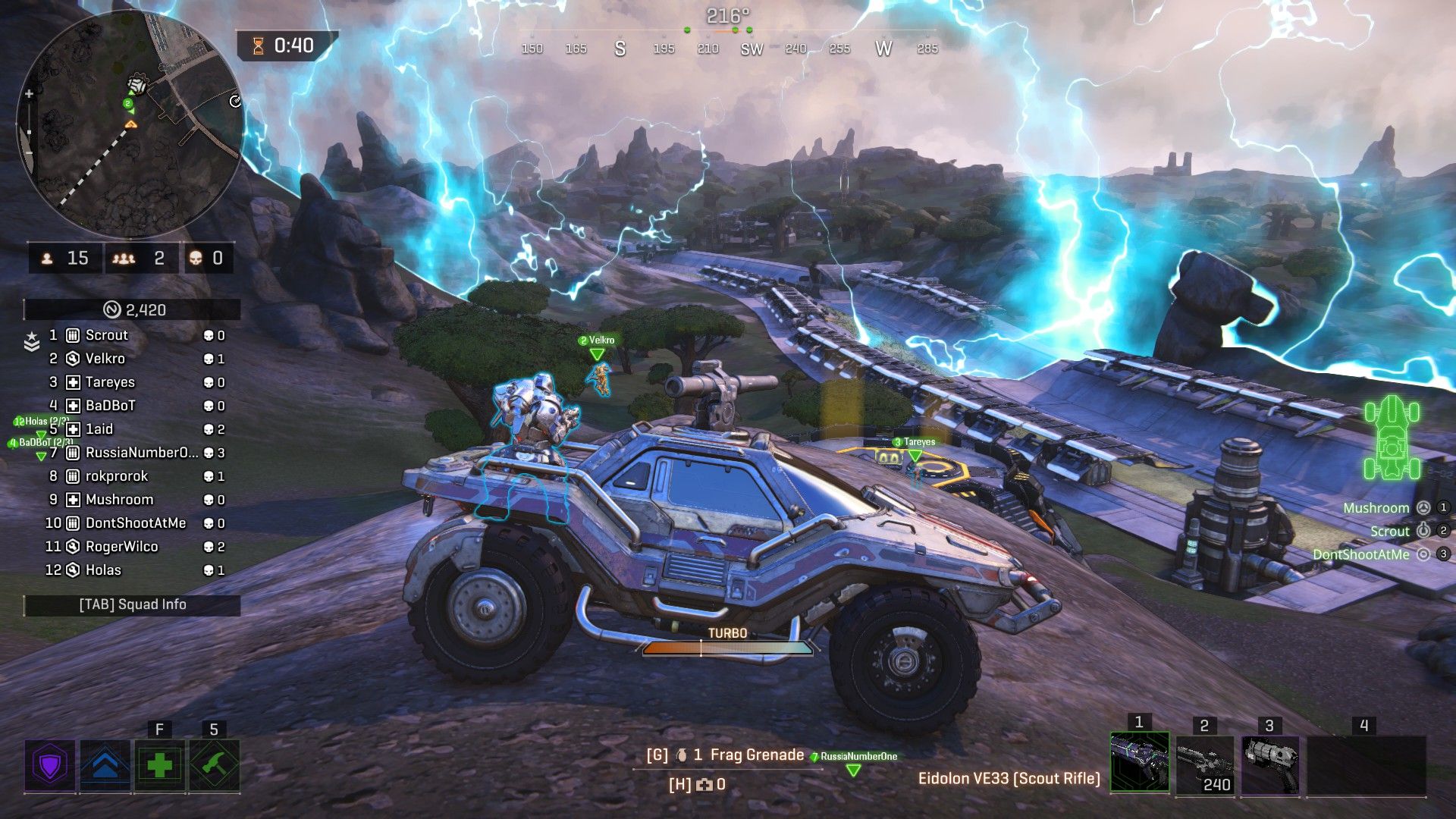 Brendan: It does feel like a diluted version of what makes PlanetSide 2’s eternowar appealing. Then again, I am speaking as someone who only ever graced the atmosphere of these big ol’ battlegames. I had to ask you what an “Infiltrator” was while we were playing. And you calmly explained that it was a cloaky sniper, right before finding a flashy sniper rifle in a drop pod and demonstrating your dormant PlanetSkills.

Sin: 2012 Sin would have been an absolute monster with that thing. But it wasn’t the sniping so much as the bag of tricks and tactics that I got good with in Planetside 2. Most of that is gone, and some of it relegated to luck-dependent random drop pods from the sky. And the bonus weapons you find within those, in particular, suffer a bit from the need to practice and get a feel for ranges and bullet drop and so on that you won’t really get in a battle royale. But perhaps I’m unfairly judging it for not being a different game. 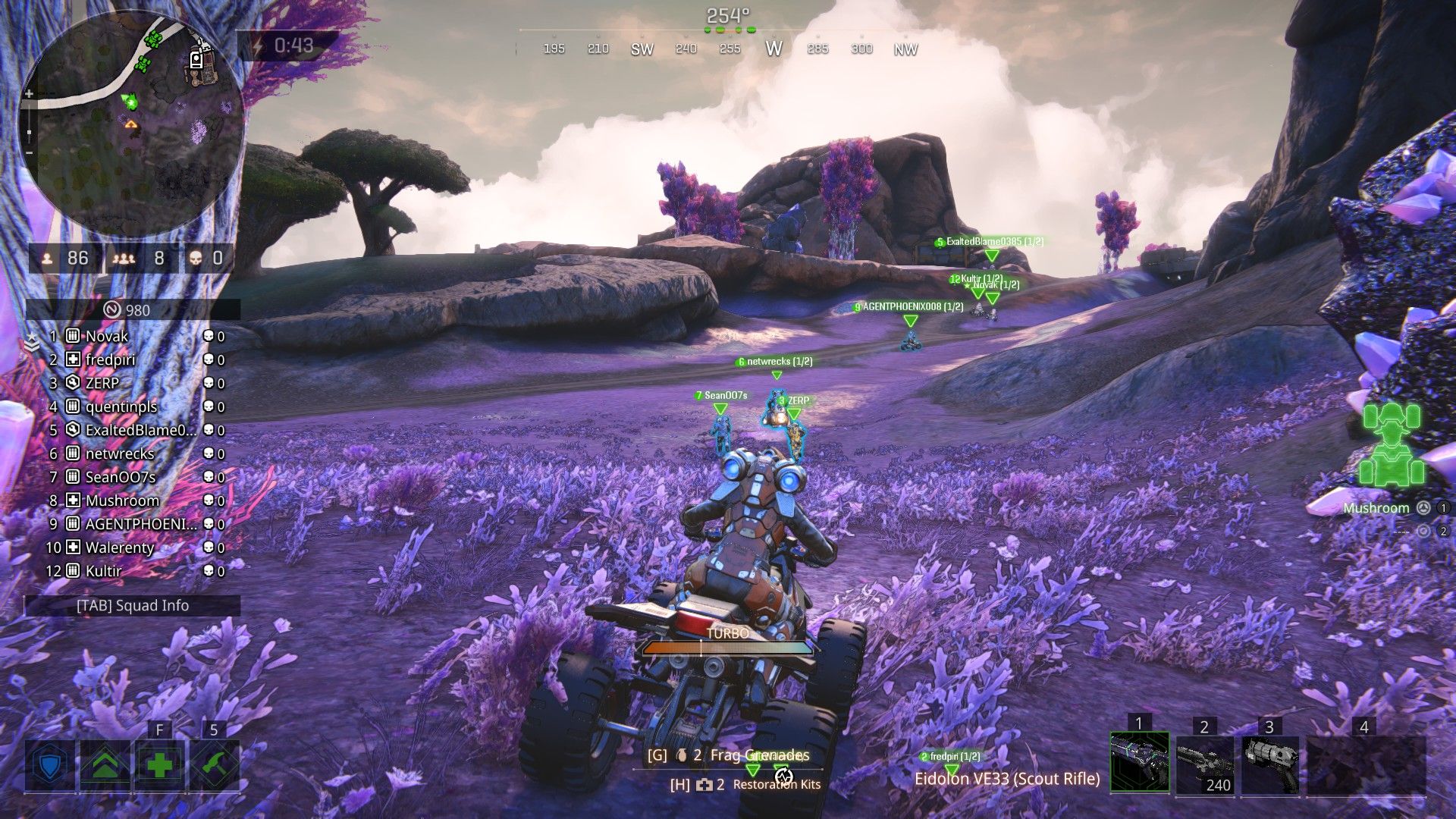 Brendan: It takes a lot from its fellow battle royalists, and I feel both the daunting presence of Apex Legends all over the place. The drop pods with the flashy sniper rifles and rocket launchers even look the same as Apex’s “care packages”. The only major thing it doesn’t carry over is the pinging system, which I get because they probably want this to remain a little different. But of all the things to refrain from lifting, pinging would have been the most useful one.

Sin: If you’d wanted pinging I could have shouted “ping” a lot, Brendy. What is pinging? Is it the same as spotting? That was a big part of Planetside 2. 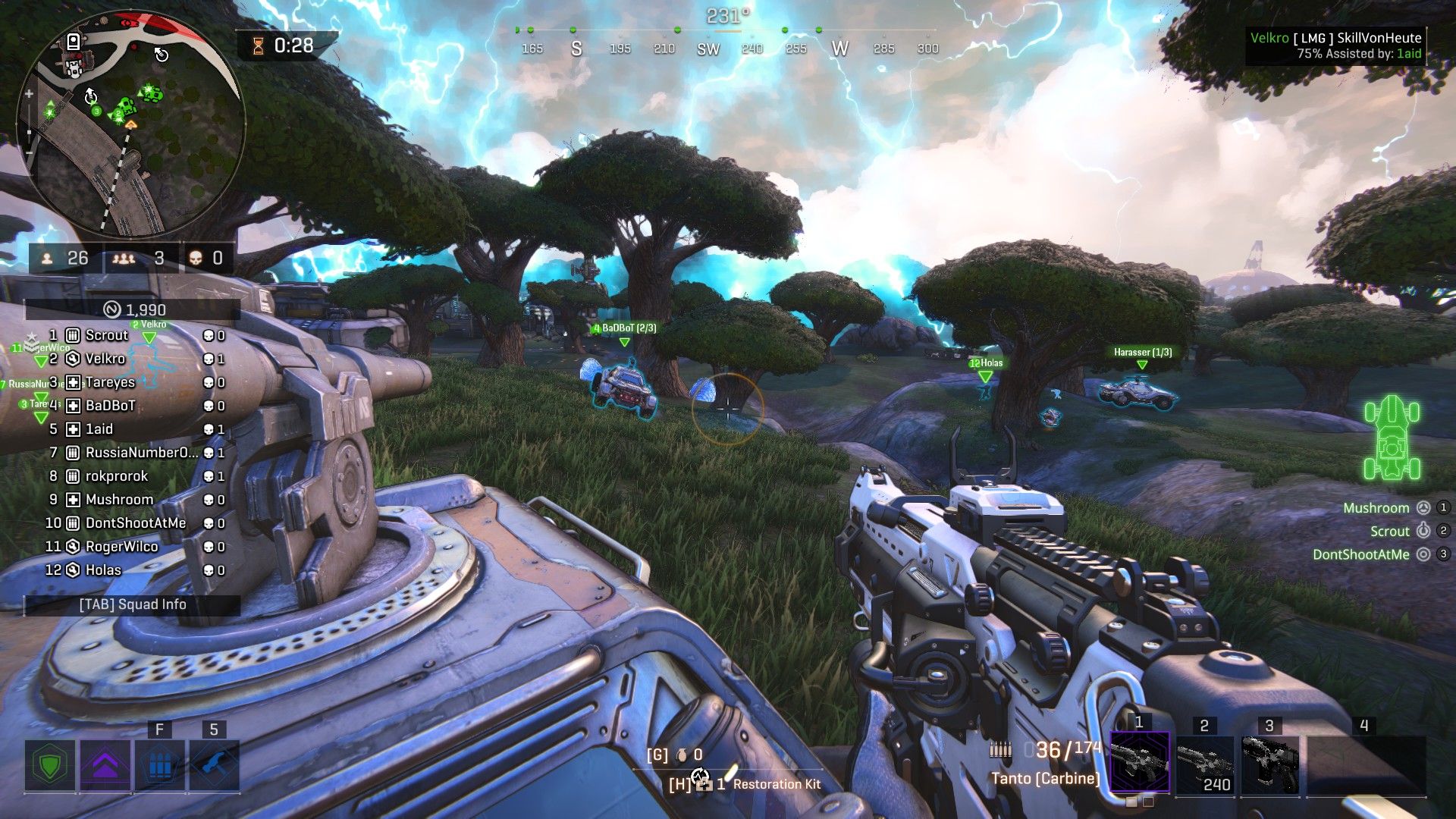 Brendan: Yeah, there’s spotting here still - a tap of the Q button to mark an enemy. But in Apex you can ping basically everything - an enemy, a distant loot box, an open door, a gas trap left behind by some git. At one point we were alone in an open meadow and I was saying “let’s go up that hill” and I wanted desperately to just ping ping ping ping, to show you where I meant. But I just ended up saying “That hill to the, uh, west?” Which I guess orienteering wonks will like.

Sin: A ping or two would have been very helpful, even considering we were using a third-party voice chat, like a pair of crooks. I kept seeing things and not being able to point them out before they vanished. The quick point and nudge stuff and a radial chat thing (like Team Fortress 2 or even Planetside 2) would go a long way, especially if your squad is 12 randos. 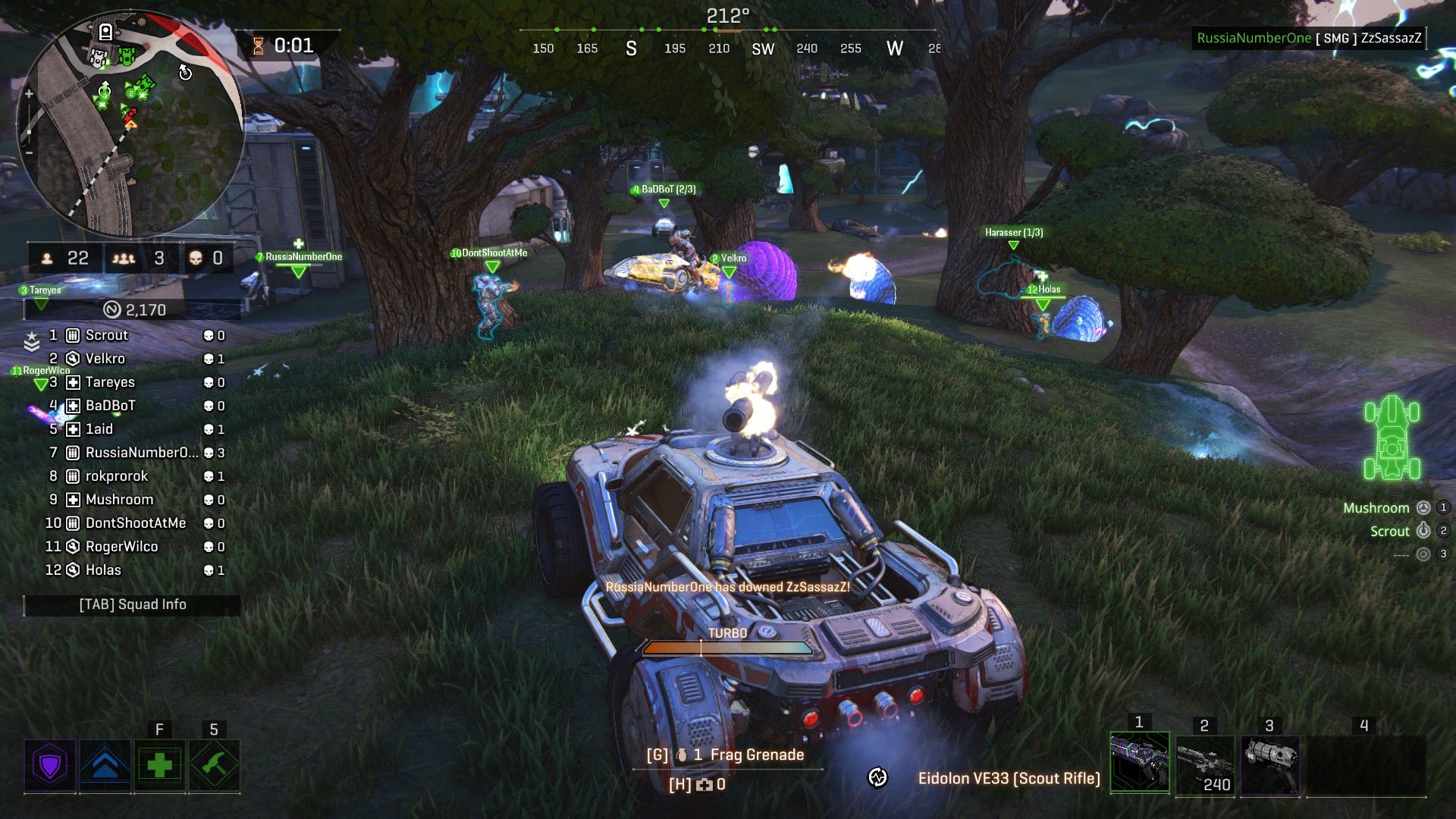 Sin: The bane of my Planetside 2 time was tanks (and aircraft, which are sensibly absent). They can appear in Planena and I … well, when I got stuck in the final circle against a tank, what was I supposed to do, exactly? But then I screwed up by abandoning you, and you had a rocket launcher, so maybe that’s a strength. The team that killed me did so with a great coordinated flank. The tactical stuff could really bring a lot. Although the communication options are extremely limited at this point.

Brendan: They whooshed forward on their jetpacks at the same time! It was very dramatic. There were plenty of moments like this I liked. The big convoy we made with our 10 teammates in one match was splendid. Then there was another match, where our team got split up and our detachment got zapped, and I had to escape on my pocket quad to link back up to the surviving squad, who brought you back with a big revive machine. 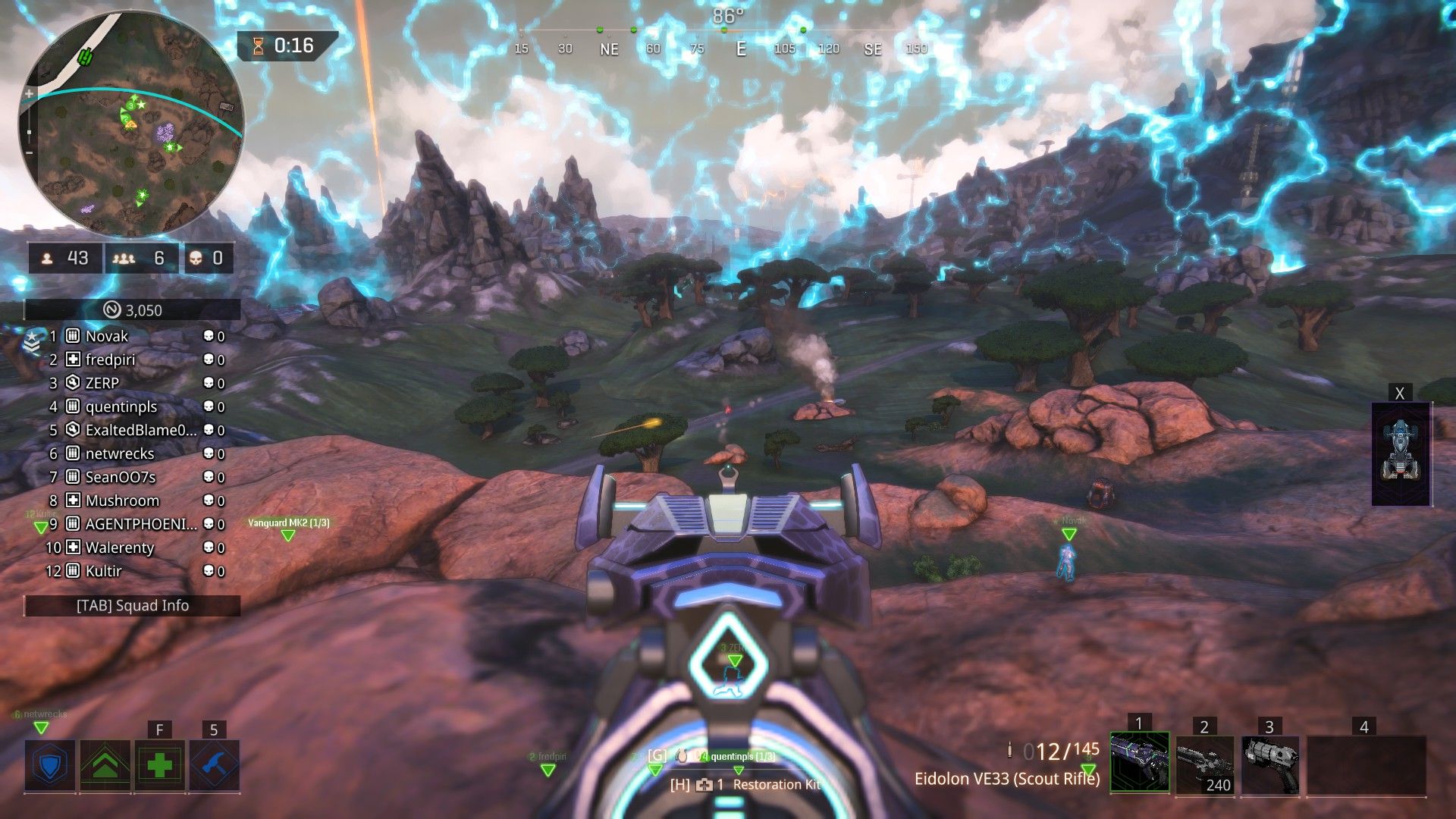 Sin: The cool shootout when we had two or three guys pinned down behind a ruined tank. Then just as we got the upper hand with some pretty decent teamwork, the PAIN ZONE COMETH and the entire squad wordlessly magicked up a quadbike and pegged it, every man for himself.

Brendan: The PAIN ZONE for those at the back of battle royale class, is this game’s name for the ever-closing circle of doom (well, It’s the “pain field” technically but PAIN ZONE is better). 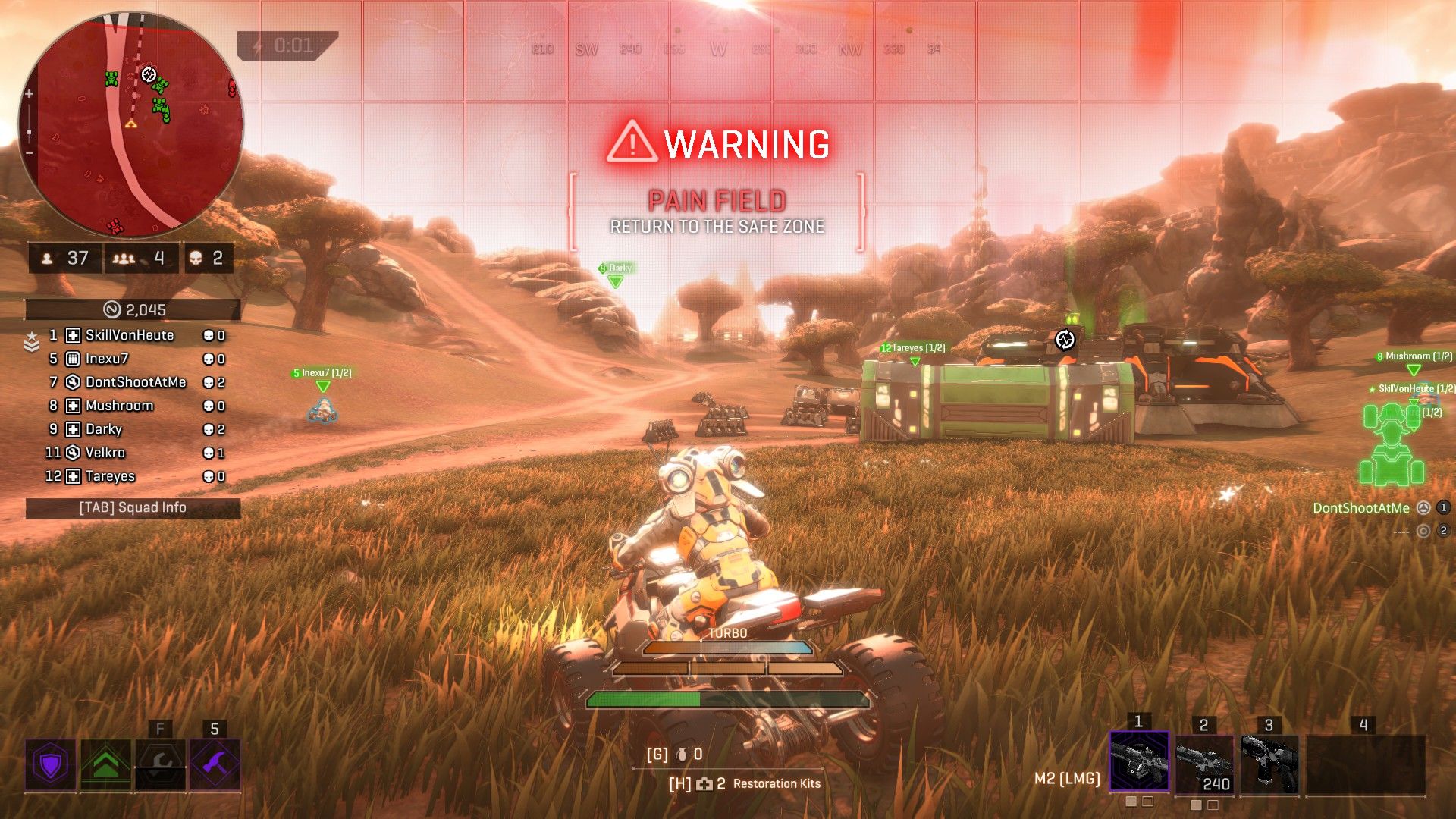 Sin: I can see some potential for some fun anecdotal moments like that. Probably more so than the solo battle royales, with their faintly Rimmerian “and then I shot the man and then I ran and then I blah blah blah”. It feels less stressful too when you can rely on your team somewhat.

Brendan: I did play a three-person match while you weren’t looking, and I found it far less interesting. It’s basically an sci-fi Plunkbat. The map is roomy, but not very detailed. And the stuff you find all sorta feels generic. I think maybe PlanetSide needs numbers to be interesting.

Sin: I’m not sure how I feel about the way collecting stuff works. In the few broyales I’ve played you start with a really sharp spoon and have to scavenge decent guns. Planena lets you pick a loadout from a small (and mostly very similar) selection, and instead of guns, most of your items will be upgrades. Laser sights, more jetpack fuel, faster shield recharges, grenades. That’s a direct advantage over someone who didn’t pick up the right bits… but then perhaps it’s better that everyone at least has a couple of rifles so you’re never totally outclassed. And again, teamwork does seem to be the big decider by the end. Which is good, but not without its downsides. 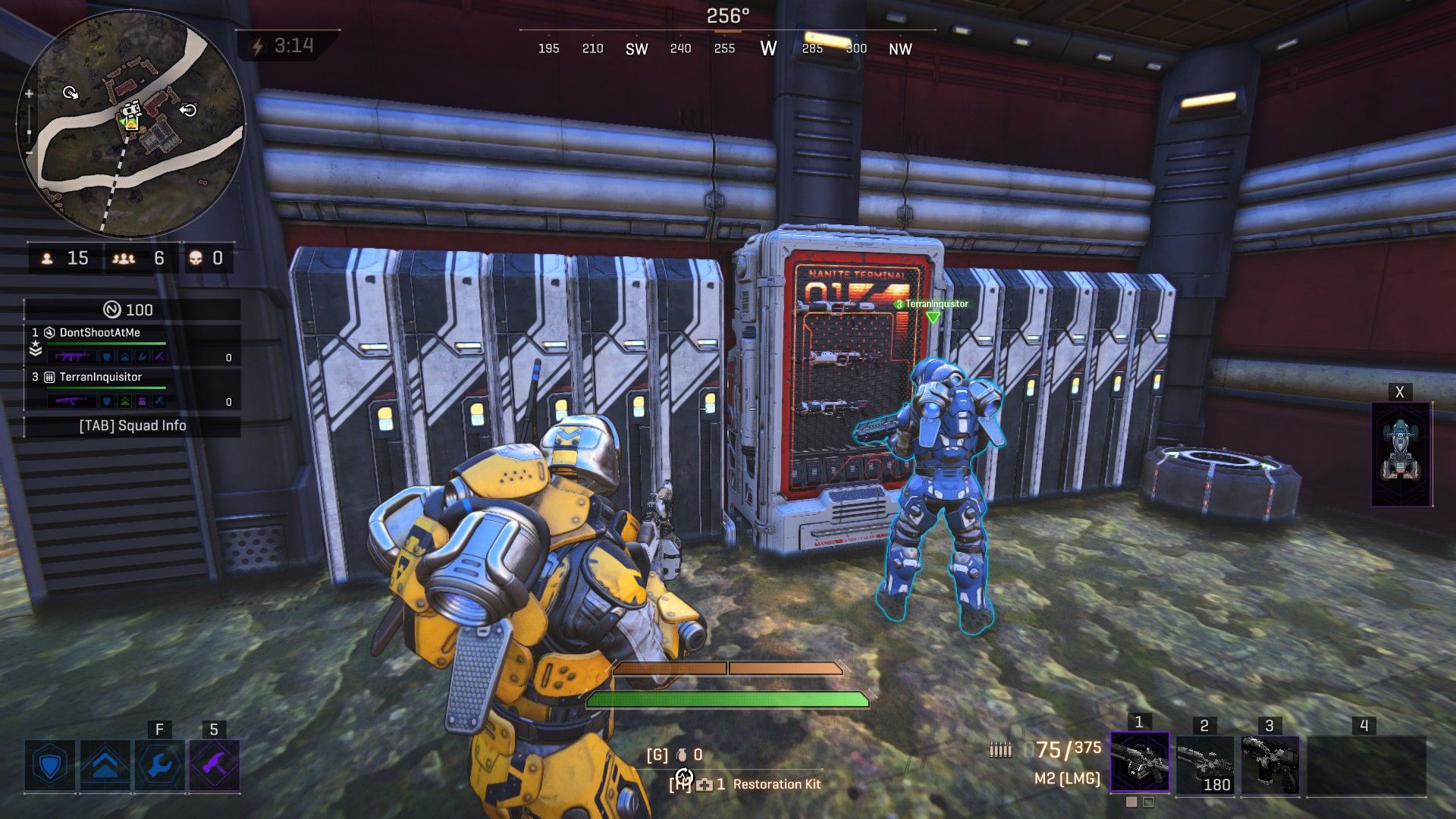 Brendan: The thing I noticed is that I never stopped to swap anything. There wasn’t much decision-making going on in the battlefield. I didn’t stop next to a gun bin and think: “Oh, what is this? I’ll take that and drop this.” I just hoovered everything up until all my guns and skills were purple.

Sin: I swapped a grenade type around, and I swapped a healing thing for a better healing thing. There was a “sniper or rocket launcher” choice at one point but there were two of us, and if you’re alone you’re probably already hosed, so yeah. A bit low-stakes. Which brings us to unlocks I suppose, and longevity. How many thousands of pods or space batteries or whatever these loot boxes are called do YOU have? 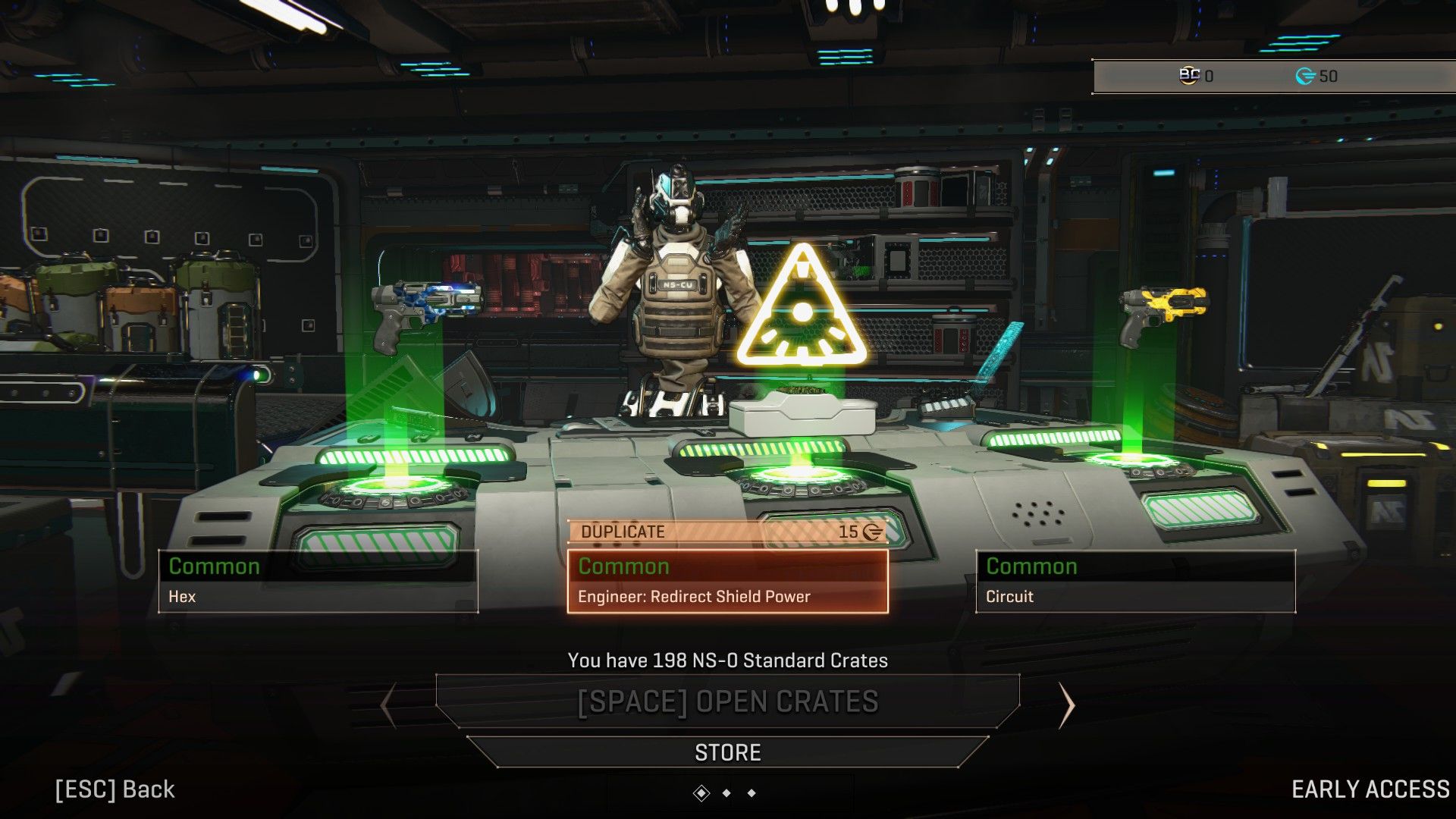 Brendan: I have 200 loot boxes, for some reason, like a big bag of pick ‘n’ mix. Some of the stuff you get in these is cosmetic, but some are mods and gunbits, and you can equip these to make them “findable” on the battlefield. One of them made me faster when crouching, for example. But I swapped it out for one that made me run faster if my shields got taken out.

Sin: It’s interesting that the unlocks and ‘mods’ for guns I’ve seen are quite minor, mostly based around getting more ammo or faster reloads if you headshot someone or break their shield. That leaves the physical gun mods as stuff to find on the map on a per-game basis. And a lot of those are underwhelming. I grabbed lots of nanites (cash) to bank them for the team but never found the upgrade terminals where I could actually spend them. The only gun I like is the one-off sniper I lucked into. I miss my NS bolt-action face destroyer. Everything else felt a bit soft. And I struggled with the third-person perspective a little, though I can’t articulate why without banging on about Planetside 2 again. 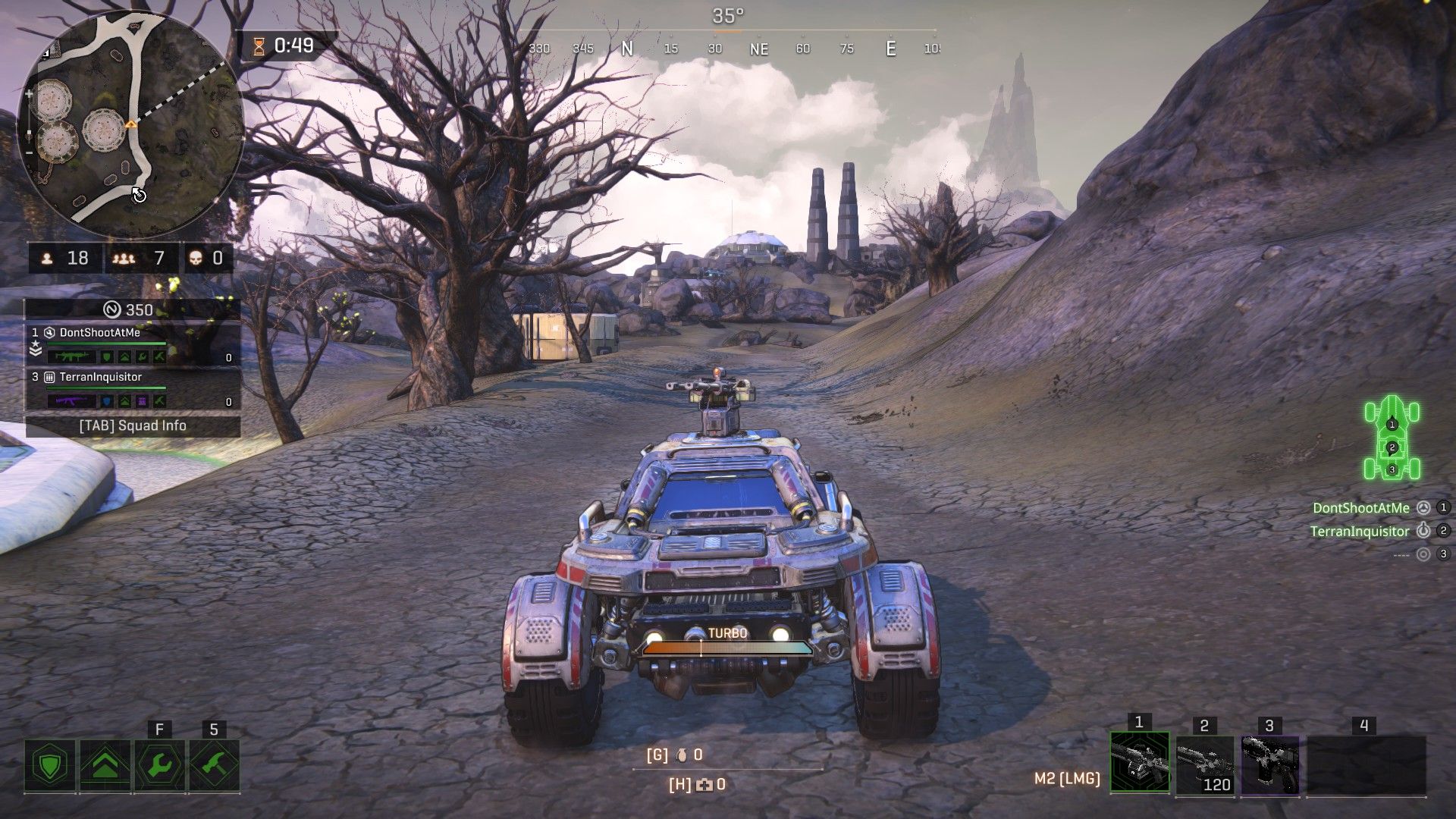 Brendan: Let’s wrap up our thoughts and fire them out the escape hatch. Do you think this is a good PlanetSide game? Like, does it do anything you didn’t already appreciate in PlanetSide 2?

Sin: I think it guarantees chaos. Rounds start quiet, and gradually get more overcrowded and manic. That can happen in Planetside 2 but it tends to take ages, and results in huge repetitive scrums that resolve over an hour or 3. Here you get a more condensed experience. I think it works, even if it has some way to go (hence early access).

Brendan: I liked that chaos too, the big “set piece” moments that happen naturally, and the presence of bazooka jeeps. But I didn’t feel overly impressed by much else. The movement, the shooty-shooty, the item-hoovering. For me, in terms of royal bats, this ain’t no Apex predator.