My spaceship has taken off. This ought to be cause for celebration, a moment that engenders cheers from mission control. Except there's a problem: I’m not in the cockpit. I’d been looking at the ship’s log in the back and considering my next journey when suddenly the whole ship just rose up. “Oh no,” I say, as the sensation of free fall kicks in. “No no no no no.” I run back to the cockpit and look around. The ground outside is still there, the trees and the grass. This is odd, because it’s also pitch black - we’re definitely in space. This is when I realise: My ship didn’t take off. The entire island did.

This is space exploration game Outer Wilds. And I have no time to understand how the whole island on which I've parked has been launched into space, because it’s already falling back down. I need to take off, right now.

This isn't the first time we’ve seen this scrappy-looking space lark. You might remember it for its Majora’s Mask style time loop. You play as an alien who blasts off to explore a tight-knit solar system, but every twenty minutes the sun goes supernova, and time rewinds to the moment before lift off. It’s Kerbal Space Program meets Groundhog Day and even in it’s alpha, it was a wonderful place to spend your lunchtime. It also won an IGF award back in 2015.

But this year, say developers Mobius Digital, we’ll see the space jaunter finally launch in a finished state. I clambered aboard the newly designed ship for the first time since toying with the alpha years ago, and was quickly reminded why it feels so special.

“It’s kind of ridiculous that we’ve been able to take it this far,” says Alex Beachum, creative lead at Mobius. “Because the alpha was like a skeleton of what it was supposed to be. And we were not only able to flesh out the skeleton, but also just take a pass at everything.”

In other words, they’ve scrubbed it all up. There are more characters to meet and greet in the solar system, and all of the art has been re-done, sprucing up the planets and turning blocky placeholder aliens into freckle-faced extraterrestrials worthy of a cameo in Oddworld. Most importantly, there's now a definitive reason to keep repeating the same 20 minutes of space life over and over. A solution to this ill-fated solar system.

“The ending is there,” says Beachum. “There are answers.”

It begins, as before, on your home planet. It’s the sleepy village of every childhood RPG. The museum of your hometown is full of relics and strange objects, all designed to “make you curious” about the universe at large. One exhibit, a model of a scary angler fish, brings back hazy memories of a lifeform I’d rather avoid for this short demo. I only have twenty minutes, so I’d better get cracking. 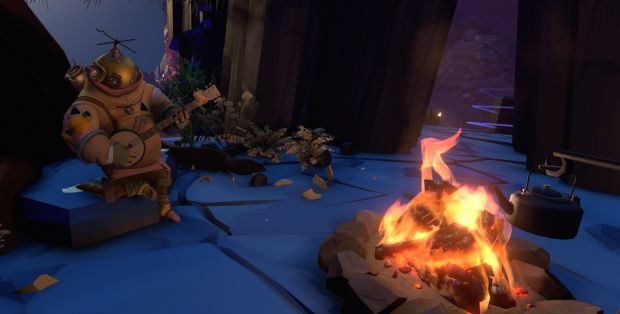 I climb into the ship and blast off. The planets of this system have been given colour and detail, but they’re the same in concept as they were in the alpha. A shattered world modeled after a geode, a comet hurtling around the other planets, a scrag of space brambles orbiting far from the sun, and more besides. At one point in space, I notice my ship has a bit of damage. I leave for a short space walk and repair one of the panels, the sun glimmering in the background. I’m ready to land.

I steer toward what looks like an ocean world. Flying is fairly simple, and made easier by holding a single button to match velocity of whatever you’re hurtling towards. But I like to fly manually, because I’m a fool. The moment we enter the blue planet’s atmosphere, gravity takes hold, and I plummet beneath the thick layer of cloud that covers the whole world. It’s a noticeable difference in control and I’m soon wrestling to swerve my ship and land on a nearby island. This is made harder by the several swirling tornadoes rolling across the planet’s surface.

Here, I’m reminded what Outer Wilds is all about: discovery. Once on the island, I find an astronaut playing music and lying in a hammock (well, he’s floating several feet above the hammock – there’s still a bug or two). He talks to you about the universe, giving you a few clues to follow up. As a fellow spacer, the closest thing you get to a gun is a sound scanner (for hunting down other space musicians), a translation device (for scanning cryptic writings found throughout the system), and a scout drone launcher (which lets you take photos, Voyager probe style). This reminds me of the philosophy of discovery and exploration in games like Subnautica. It looks to be about understanding your surroundings and avoiding danger. Or sometimes approaching it, provided something can be learned.

To that end, the ship’s log now has a “rumour” mode. I saunter back aboard my ship to check it out. This is a screen that fills with tidbits of info, clues that will stay put even after the time loop resets, creating a steady network of mysteries to investigate, questions to answer, and places to go.

“It’s basically the representation of your character remembering things,” says Wesley Martin, the game’s art director. He explains that all the dialogue and ancient text scribbled on walls is there for a reason.

“People are used to filler text," he says. "Here all the text is actually useful.”

I’m inspecting the rumour screen when suddenly there’s that lurch, that feeling of free fall. While I’ve been busying looking at a screen, one of the planet’s tornadoes has launched the entire island, and my ship with it, into space.

“Even while you’re looking at the ship’s computer,” says Martin, “physics is still going.”

But the tornado’s fling was not strong enough to hit escape velocity. The island – and the ship – is plummeting back into the cloud. I quickly get in the pilot’s seat and start the thrusters. The island drops but the ship stays afloat, eventually we escape the planet and make it back into space. I’m not sure what happened to that other astronaut.

I’m also not sure how much time I have left before the sun explodes. When I ask Martin and Beachum about this, I’m told there'll be no countdown on screen, no ticking stopwatch. That's a deliberate decision, made partly because the player is already inside what is essentially a giant piece of intricate clockwork. The solar system and its bodies act according to their schedule. So you can tell how much time you have left by how red the sun has become, or you can look outward, to the stars, and observe how many you can see. Fewer stars means a brighter, more unstable sun. Two of the planets are also locked in orbit together – the hourglass twins – so-called because sand flows from one to the other. A planet-sized egg timer.

As it turns out, I have very little time indeed. Soon after my escape from the tempestuous planet, I touchdown on a new world and the game crashes. It’s another bug, one the developers already know about.

“What happens is: the comet hits that planet,” says Beachum. “It’s, uh, not supposed to.”

More’s the pity. I love a good comet impact.

There’s still no release date for Outer Wilds beyond the “squishy” one they’ve decided to aim for internally. Although I am told it’ll be out some time this year. Those who played the alpha years ago might worry that the novelty of zipping from planet to planet will have dissipated. But having seen the toy-like solar system in its colourful new form, and been reminded of the mystery, I’m looking forward to going through it all again. Some time loops are a welcome trap.