The most satisfying moments in Overgrowth [official site] take place in mid-air. Rabbits are typically good at jumping, but they’ve got nothing on their anthropomorphic cousin, Turner, the martial arts master and hero of this critter-bashing romp. His leaping ability borders on the power of flight. During those seconds, suspended in the skies above the game’s largely empty battlefields, it feels like anything’s possible. Invariably the landing disappoints. Sometimes fatally. That’s Overgrowth: lots of potential, rarely reached.

Turner’s arrived in a new land, ready to have a nice, relaxing life. But no! There are slavers he has to kill. And that's about it for the threadbare narrative. It's little more than an excuse to get into a series of fights, peppered with platforming sections, and it’s basically the same story as in Overgrowth predecessor Lugaru - a remake of which is included here - but without the personal stakes. 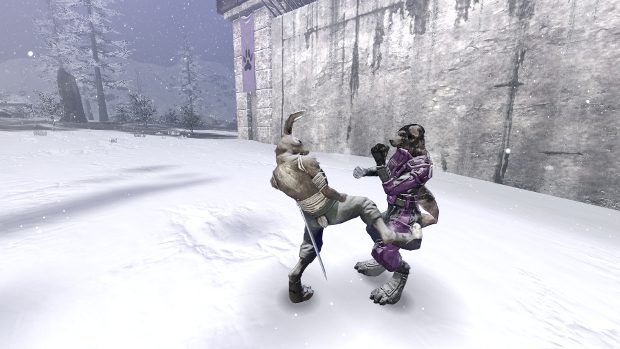 Overgrowth’s been cooking away for nine years, and I cannot figure out why it’s suddenly out now. It certainly doesn't seem finished. Every single element, from the environments to the story, feels like it’s missing something. In some cases, it’s just unpolished, but the overall impression is that this is a game that’s still very much in beta.

The ‘Thick fog’ level is a pretty effective showcase for where the game’s really at. The level is huge, and full of gentle hills and wildflowers; blandly idyllic. But it’s also a spooky forest, complete with gnarled, dead trees and eerie, swampy fog. It’s like two or three different maps layered on top of one another, with no real identity or consistency. 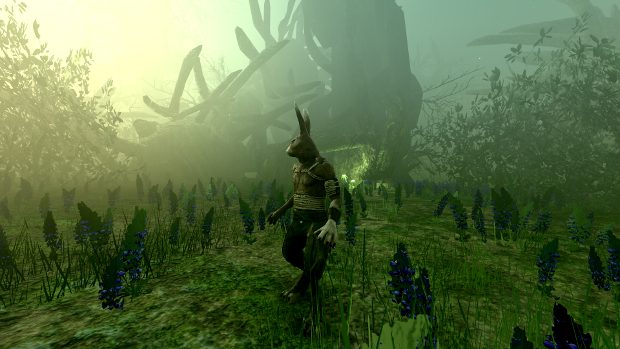 When Turner enters the level, he realises he’s a bit lost. There are no real objectives in the game outside of what you catch in the brief bits of dialogue, and here the implication is pretty clear: find the right way out of this pleasant field of flowers/haunted forest. The scale of most of the maps implies that exploration is a good idea. It never, ever is. It’s maybe the worst thing you can do, leading to wasted journeys and getting stuck in parts of the map that are entirely open to you, but are far from ready for visitation. And this is how I ended up walking across the bed of a lake without dying, even though water is fatal in the rest of the game, before slamming into an invisible wall that spun me around.

I spent at least half an hour exploring this weird location, finding nothing but big, empty, unfinished spaces. Eventually I gave up, restarting the level. It turns out that all I actually needed to do was walk straight ahead for 30 seconds, encounter some aggressive rats, and then kill them, completing the level. There’s no indication that this is the case, however, and nothing suggesting that going in any other direction is pointless. 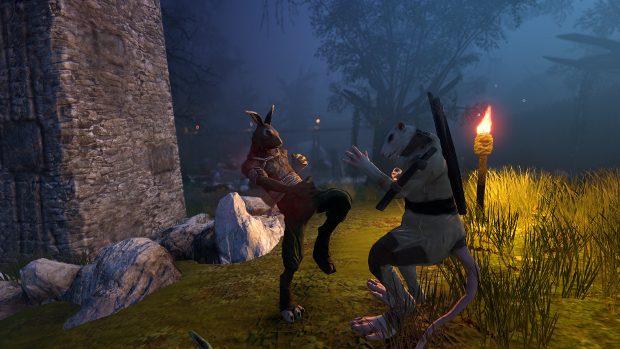 Most levels are laden with similar issues. Every single map could be a tenth of the size, and nothing would be lost, and nobody would end up wasting their time. It seems like a fundamental misunderstanding about how players act when faced with large, open areas. Ultimately, this is a game mostly made up of arena-style brawls, but that’s not remotely reflected by any of the level design.

Overgrowth is terrible at communicating things, generally. You’ll be wondering plenty, like if you’re going to be able to hit a target with your knife, or why you can die by jumping sometimes, but just as often be completely fine, but the game’s not forthcoming. Not only does it withhold pretty much every piece of information that you might want to know, it’s almost willfully inconsistent, meaning that anything learned might be rendered useless. 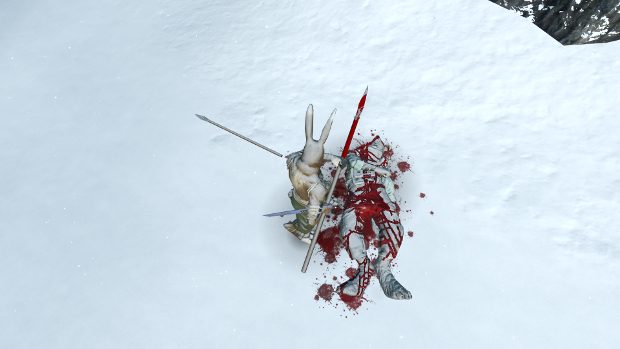 The largest source of my confusion is undoubtedly the damage system, which I continue to know nothing about. Wolves are the game’s toughest enemies, so I’ve had plenty of opportunities to die over and over again at their claws. All of those deaths have taught me one thing; that there is no clear logic. In one fight, a wolf managed to kill me with two kicks. In another attempt - same wolf, same conditions - he kicked me twice, but then he had to take another swipe before killing me. After that, he killed me in a single kick, which also saw me launch into the air and fly over the edge of a cliff.

This lack of consistency works both ways. I might take a rat out with a single kick, but then have to beat the crap out of his otherwise identical buddy before he goes down. When the rules aren’t clear, it makes winning or losing meaningless. The rest of the game is similarly inconsistent, but it’s most disappointing in combat because fighting is one of the few parts of Overgrowth that’s otherwise enjoyable. 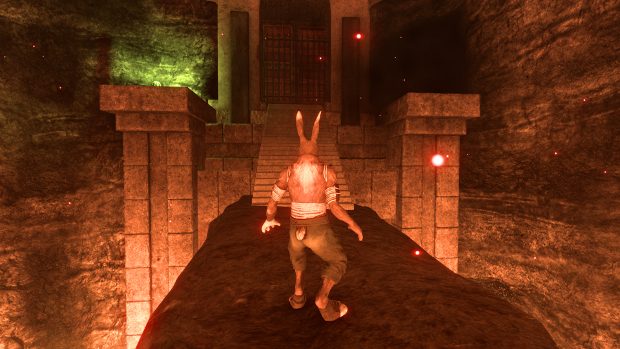 Battles are blisteringly fast, and often a bit absurd thanks to the over-the-top physics engine that calls to mind a slightly more sedate Goat Simulator. On the surface, brawling seems like a simple affair. Hold down the left mouse button to attack, hold down the right to block, or press it to grab an enemy and disarm them, while shift makes Turner roll. Pretty straightforward. Doing this while trying to manage multiple enemies, some of whom might be wielding one-hit-kill weapons, is where the challenge lies.

Fights are all high-risk affairs, too, and Turner can’t take much of a beating. Unfortunately, there's not much impetus for trying to wrap your head around the system in any meaningful way because the optimal choice is almost always to leap into the air, press the attack button, and watch as your foes fall before you. Sometimes they’ll try to throw weapons at you, but not all that often. The only thing stopping these flying kicks from letting you win almost every battle is that there’s no aiming, no lock-on, and no real way to know if you’re going to actually hit something until it’s too late. For all its issues, however, combat is light years ahead of the platforming. 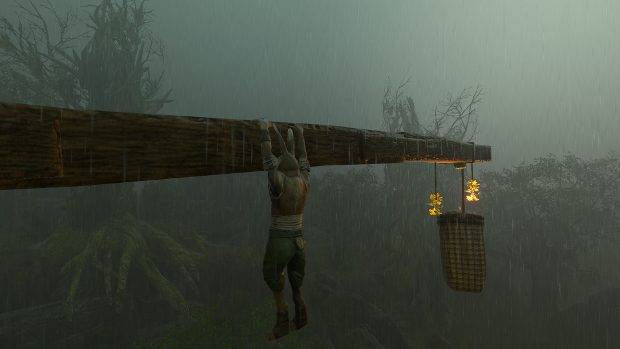 Overgrowth is too floaty and imprecise to make for a competent platformer, yet platforming makes up almost half of the game. I never found it to be anything less than a miserable experience, despite the fact that jumping feels great on its own. Even if the controls were fine-tuned, it’s dull. You’re just jumping from one rock or ledge to the next, with the occasional bit of janky wall-running that only works half the time. There aren’t any obstacles or challenges aside from trying not to overshoot the leap. The only time it’s memorable is when something infuriating happens, like the two times I made a successful jump only for the game to decide I fell to my death. You died, the game told me, while Turner stood safely where he landed.

So yes, Overgrowth is also a bit buggy. I’ve fought enemies who seemed to be standing on invisible rocks, I’ve become stuck in the terrain while platforming, and whether due to a graphical glitch or something else, every wound and stream of blood looks like it’s been created in MS Paint. Performance issues crop up from time to time as well, mostly with the frame rate dropping for no obvious reason. The game looks like it was made a decade ago, which is more or less when development began, so I’m not sure why any modern setups should struggle. It also doesn’t fully support controllers, which can’t navigate menus. 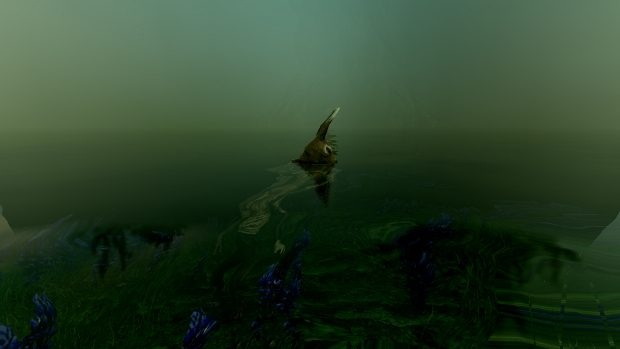 Overgrowth feels like a mod created for a wacky physics sandbox where all the openness and experimentation has been pushed to the side, and everything else has been twisted around a forgettable, barely present story and a series of brief and ugly levels. I’m just glad that, at around two to three hours long, it's incredibly short.