If you click on a link and make a purchase we may receive a small commission. Read our editorial policy.
Developer: Finji
Publisher: Finji

I spent a non-zero amount of time over the weekend imagining a dark future where the incredible popularity of Twitter account Can You Pet The Dog? led scores of indie developers to include ill-fitting snozzle-scratching mechanics in their games. Should this dark time of Very Good Boys come to pass, a game you couldn’t accuse of jumping on the dog wagon is Finji’s Overland, since it’s been letting players stuff actual wagons with dogs for a couple of years now.

Overland is a turn-based tactical game, in which each dog (or person) under your control has two actions to do stuff on a grid, after which things that want you dead get a turn to do stuff on a grid. It’s also a survival game, in that you need at least one of your dogs (or people) to survive in order to keep playing. It’s a roguelite, in that it offers harsh penalties for failure, and it’s also a puzzle game thanks to the discrete problems it presents for you to overcome. It's whimsical, but very tough.

Setting-wise, it’s a sci-fi tinged, hauntological road trip at the end of the world, with each turn-based puzzle representing one stop on the route. Once you finish a stop, you’re shown a short scene where your group reflects on whatever victories or horrors they’ve just survived. Then you pick another destination from your road map. All destinations have a fuel cost, and most are marked with a brief description of what you might expect to find there.

You drift along like so, taking calculated risks to acquire what you need, stopping to trade (or murder traders), recruiting dogs for the greatest army the world has ever seen, and scavenging gas and supplies. Eventually, you will reach a roadblock. These are invariably extra-difficult puzzles, where you have to clear debris to move your car on through to the next biome, be that the autumnal streets of an abandoned town, or a desert, or something altogether stranger. 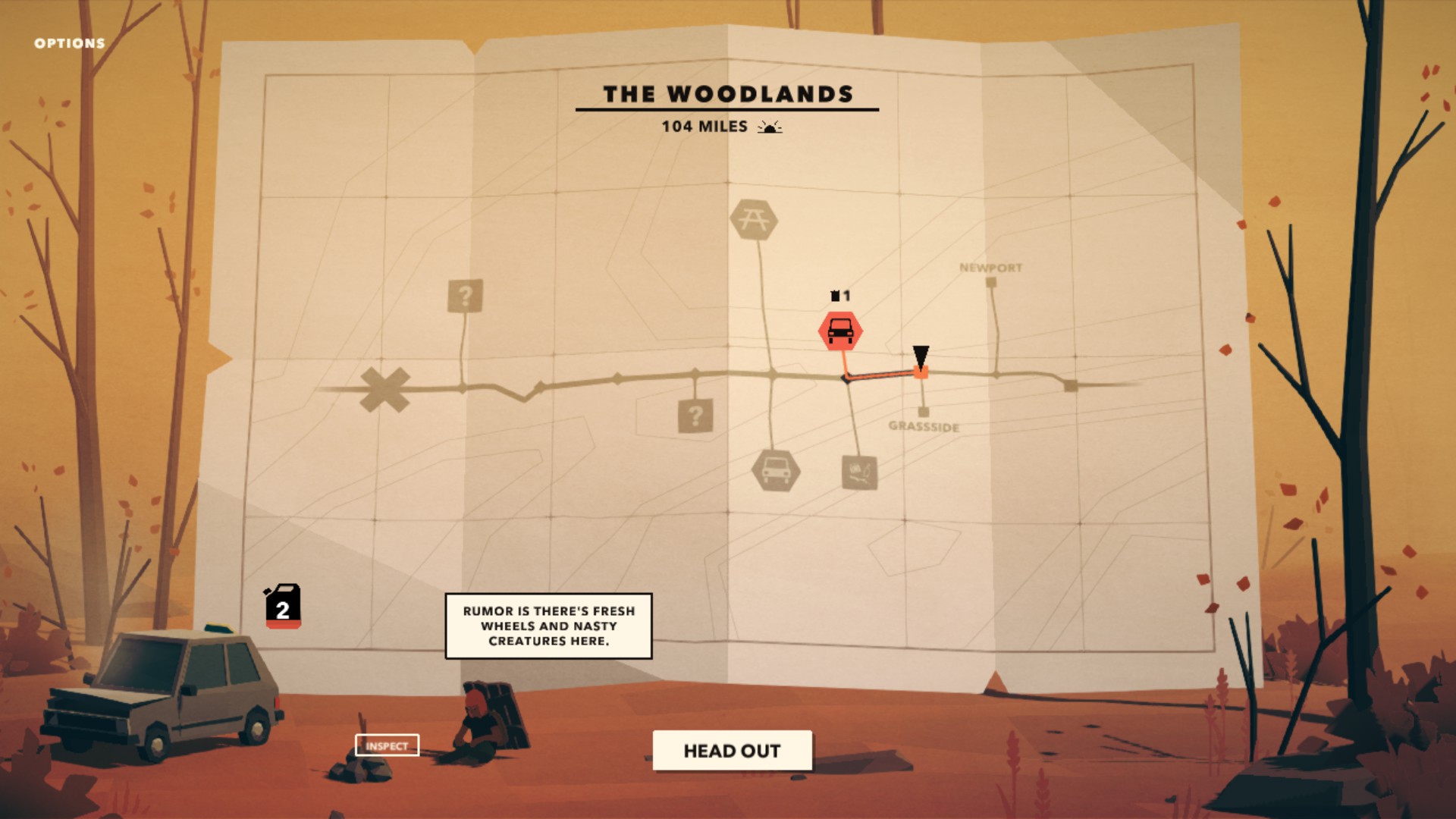 Your main opposition along the way is a bizarre menagerie of alien-insect-crabs who hate your face, presumably out of jealousy. There are your basic, ready-salted xeno-monstrosities that can make one move (attack or scuttle). There are the fearsome fishcakes that make two moves (scuttle-scuttle, scuttle-attack, or attack-attack). There are the coral-shelled chonk-maestros who only make one move but can’t be run over by your car, unlike the first two. There are the double-big roadblock shithouses, the veiny, iridescent Maltesers that explode when they get hit, and a few more spectral crabsticks that spooked me so much I drove away from them immediately.

The further you travel, the odder things get, but everything you’ll encounter has a specific pattern of behaviour, which you can generally work out after getting murdered a few times. The game never gives you perfect, Into The Breach levels of information, but you can tap a button to see if anyone’s in danger, and you can undo moves, provided it isn’t nighttime.

Each stop presents the opportunity to set your own objectives. Get lucky early in a biome, and you might happen across a stop that lets you scour it clean of goodies without much risk. Other times, you’ll be lucky to snatch a single jerrycan before things get silly levels of dangerous. Each stop effectively reconfigures itself into a different puzzle depending on what you have to hand, and what you decide you want to achieve there. 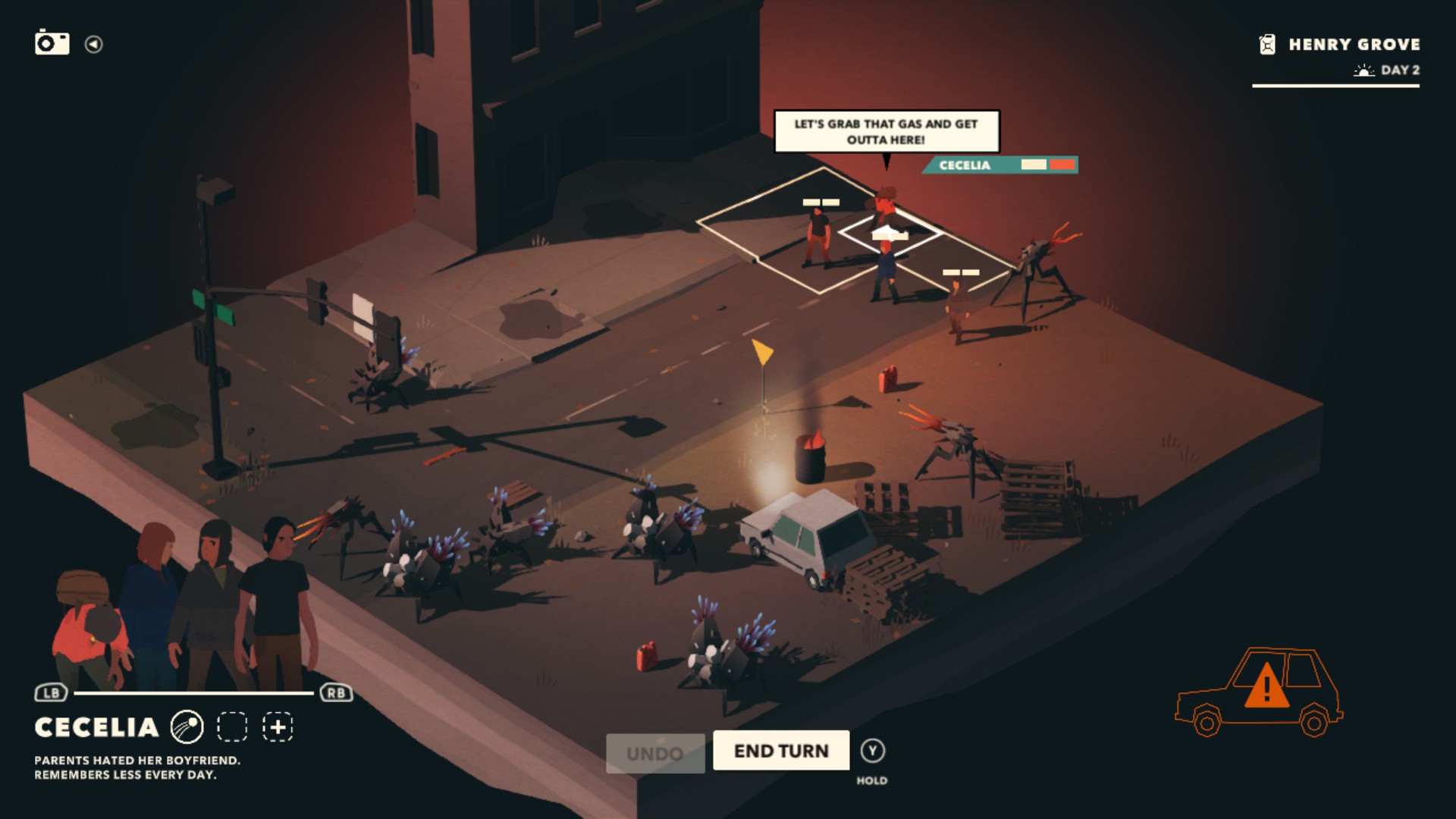 A wooden barrier blocking the road, for example, can be set on fire with a lighter, or a flare gun. It’ll take a couple of turns to burn, but if you’re travelling at night, the glow from the flames will illuminate a few tiles to either side. Or you can smash the barrier with a lead pipe, or throw a bottle at it. Or you could pull or push it away, and you might even block the path of a nasty alien while you’re at it. Or, you could ram it with your car. This will damage the car, of course, unless you happen to find and attach a fender to the front. But maybe you couldn’t find a fender, just a roof rack so you can carry more stuff. Or maybe you’re all definitely going to die, actually.

It’s through these procedural puzzles that Overland conveys its scrapbook, snapshot stories; doomed vignettes that recount the last hours or weeks in the lives of the people (and dogs) caught up in the end of the world.

Like the time when the only way for Cecilia to make it to the car without getting gored was to send Ham (who used to be in the scouts, and was wounded two stops ago in an explosion) to the corner of the map in order to lure the speedy, orange-antenna-ed aliens towards him, and almost certainly die in the process. Ham ‘found a lump last month’, according to his bio. Maybe that made the decision easier. Maybe not. 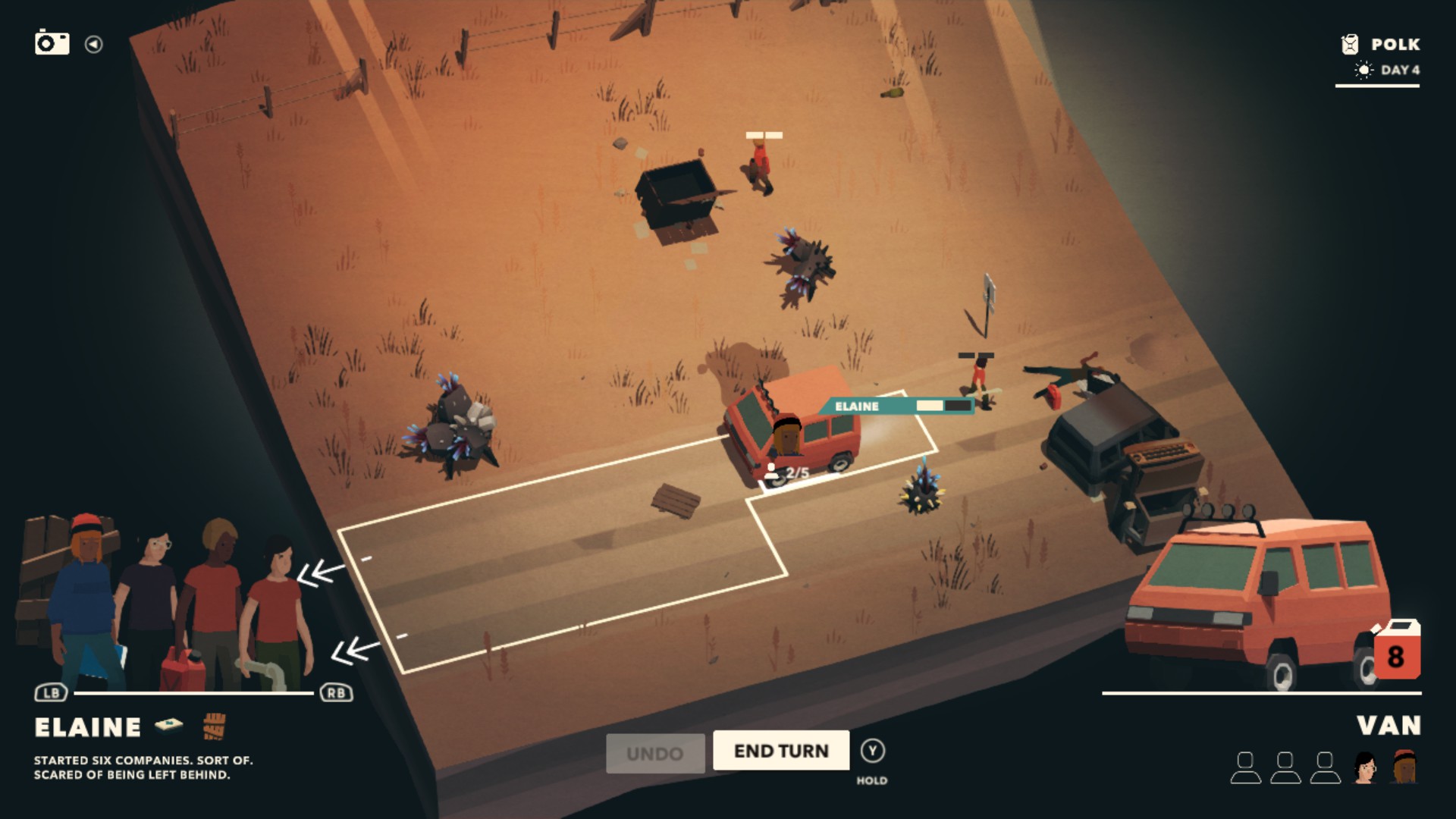 Or when Ellaine, who started six companies before this all happened, bludgeoned another survivor to death for gas with an iron pipe. He’d siphoned all the gas out the pump, you see, and they needed that gas to get away. There were three of them. There was one of him. It was, she told herself, the right thing to do. For the next few stops, however, every time they parked the car to rest, Ellaine’s companions reminded her what she’d done. Every time I checked her traits, a permanent ‘killed someone’ badge reminded me, too.

Dialogue is sparse, delivered with all the disaffected millennial malaise and good-natured doomsaying of depression memes. "Oh great. Area 51 has invaded us. That’s cool". There’s also the dogs and the hats, of course, which are more important than you might think, since things would be almost unbearably bleak without them. Between them, the jury-rigged camaraderie, and the snatches of hope imparted by honeyed acoustic guitar between stops, there’s at least a trace of optimism left in this doomed world. But, if Overland never chugs over the state line between desolate eerieness and disdainful sterility, it at least makes you aware how thin a line that is.

The single save, no-continue mentality of so many roguelites applies here, too. There’s a single difficulty setting, which you can either make harder by imposing a time limit on each turn, or easier by allowing the option to restart a map if things go horribly luminescent-appendages-up. 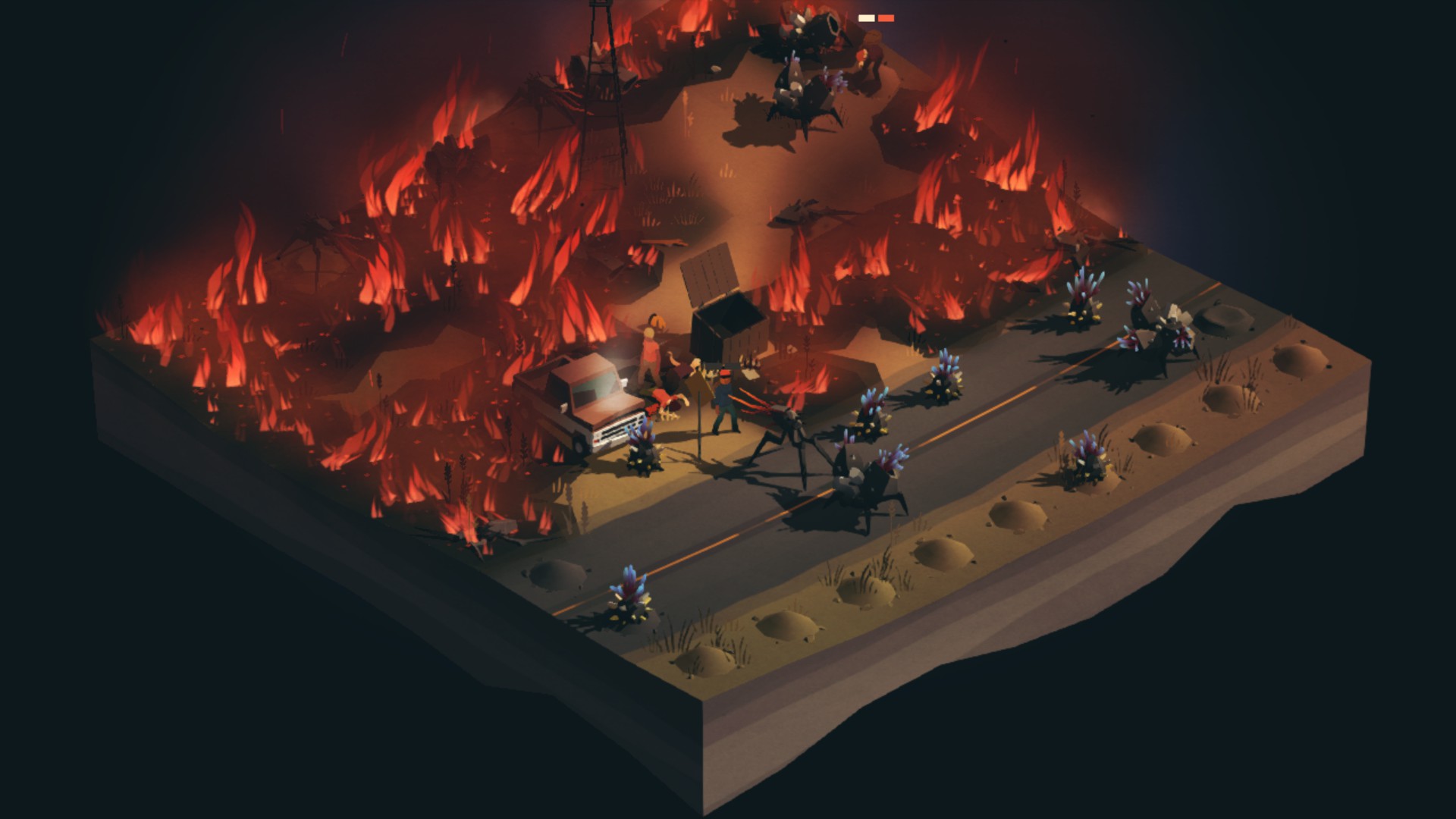 Gratingly, this option is still not available in the two situations where you’ll find yourself needing it the most: If you run completely out of fuel, or if you finish a level without a car for whatever (usually explosion-related) reason. Either one of these states will force you into a dastardly doom stop that has you scrabbling for fuel or a new set of wheels, and in which the ‘restart map’ option is greyed out. The message is clear: even at its most forgiving, Overland considers harsh consequences necessary to the experience of playing. It’s a grim sprinkle of cruelty that I can see being a frustrating obstacle to players drawn in by the surface coat of colorful whimsy.

Here’s an extremely cool thing, though: the game has a ‘dyslexic font’ option. I’m not dyslexic, but I showed some comparison screens to a friend who is, and they said that it made
“every sentence flow magnificently,” and that they didn’t need to “squint or read a sentence twice to process the information sorta better”. Neither of us could recall seeing the option much, if at all, before, either. And it’s a cool font, even if you aren’t dyslexic. More of this please. So, if all the wistful charm and horrible alien murder of a Sufjan Stevens concept album about chestbursters sounds good, go for it. Just be aware that the hounds in fetching hats and the bespectacled baristas clutching onto potted succulents obscure what is, fundamentally, an unforgiving experience that will lead to frustration before you find your feet. Go in expecting stories over strategy.

Not to say that there isn't any satisfaction, delight or surprise to be had in experimenting with different tactics and interactions. Just that you’re going to have to find some joy in heartache, and factor in what can occasionally seem like arbitrary disasters. My favourite moments with Overland were when chance decisions I’d made, or items I’d scavenged a few biomes back, rather than tactical achievement, were what saw my van-load of misfits through impossible situations.

Overland isn’t that one friend on a road trip who has packed emergency supplies, and has the itinerary worked out to the hour. It's the scarred, weather-chafed drifter you picked up along the way, and who's seen things, man. The guy you’ll end up asking for just one more story, even though the last one they told stung so hard you swore you’d never ask again. 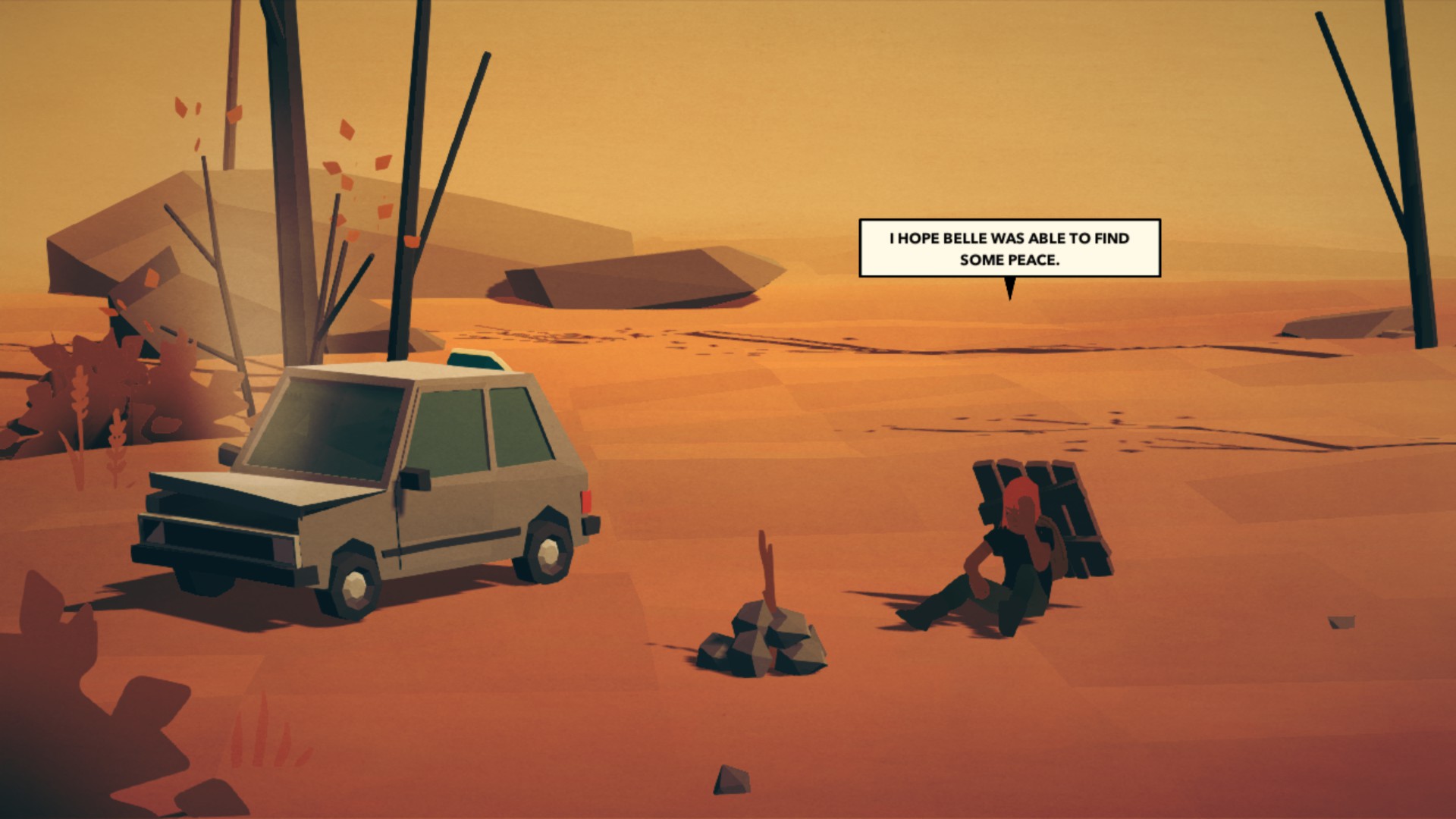