If you click on a link and make a purchase we may receive a small commission. Read our editorial policy.
Premature Evaluation is the weekly column in which Steve Hogarty explores the wilds of early access. This week, he's doing orbital parkour in a proxy robot future war.

The year is something beginning with a three or maybe even a four. Brands have become omniscient beings of pure malevolent energy coursing through the planet’s fibre optic nervous system like a bad thought. Free speech is dead. Entertainment is king. Human flesh wars, as we primitive 21st centurions know them, have ended, replaced instead with proxy battles between sexy day-glo robots with narrow waists and lovely big metal thighs. Oh yes, you’d better believe it’s a weirdly convoluted backstory for a pretty straightforward free to play third-person arena battler. This is Overstep, and it’s in Early Access, which means it’s right here in my lap whether we wished for it or not.

Let’s get one thing clear from the jump. I want to have sex with the robots. I thought it best to level with you now rather than have you wonder about what I meant just now when I mentioned the robot’s shapely hips, and how they could easily crush you between their cold, Chris Hoy thighs using nothing but their powerful hip servos. How they could gently cradle you in their jagged titanium arms and then, in the three milliseconds it takes for a few kilobytes of RAM to decide they’re done with you, just tear you in half and hurl you over a three-storey terraced house and never respond to any of your Snapchats again. I thought we should all be clear about my position on this matter before we proceed any further, and if you’re actually reading this, it’s thanks to one of the kind editors at RPS who saw an email with the subject line “can I write that I want to have sex with the robots” and thought “fine just please file your copy on time”. 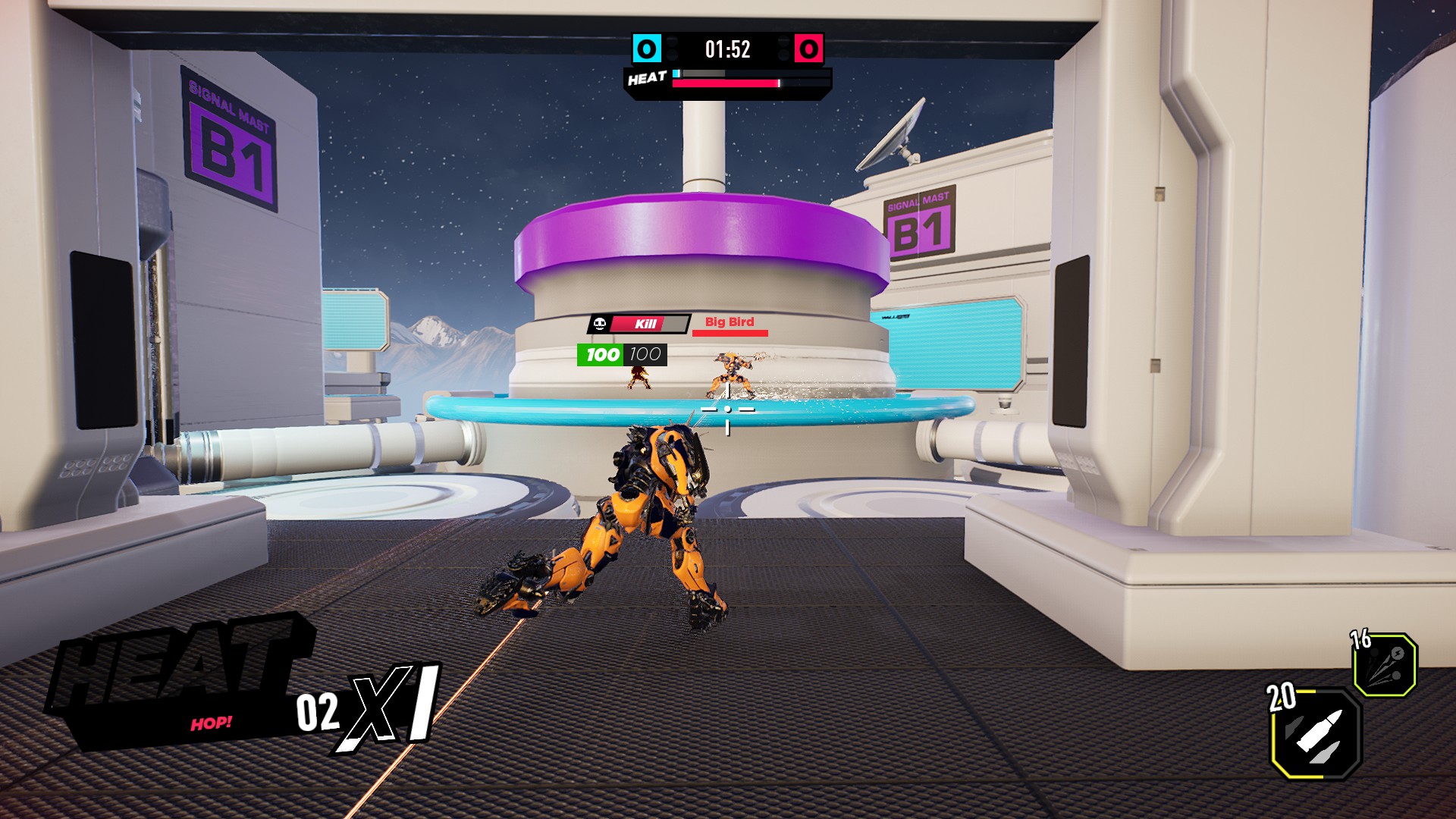 Overstep, which has in-game cosmetic purchases, advertises itself as a free to play, three versus three multiplayer arena shooter, rather than what it actually is right now, which is a free to play two versus two multiplayer arena shooter. As a Pulitzer prize winning war correspondent and first man to be fingered by a robot in orbit around Mars, I can relate to defining yourself by what you one day aspire to be, but it’s not the number of players in a match that makes Overstep stand out from other examples of the genre. No, that would be the Jet Set Radio style parkour you can do all about the place, grinding along rails and running along walls and bouncing off jump pads like you’ve just stepped out of a GoPro marketer’s daydream.

Overstep is half shooter, half Tony Hawk Goes To Space. Arenas (of which only one is available in Early Access, but I’ll be generous in assuming the rest of the in-development maps will be along similar lines) are riddled with primary coloured rails and illuminated walls. Hold shift as you scoot near these things and you’ll grind or wall run along them, generating something called HEAT, an all-caps, italicised currency that accumulates as you string together acrobatic moves. Build up enough of this stuff and you’ll score a point without ever firing a bullet. 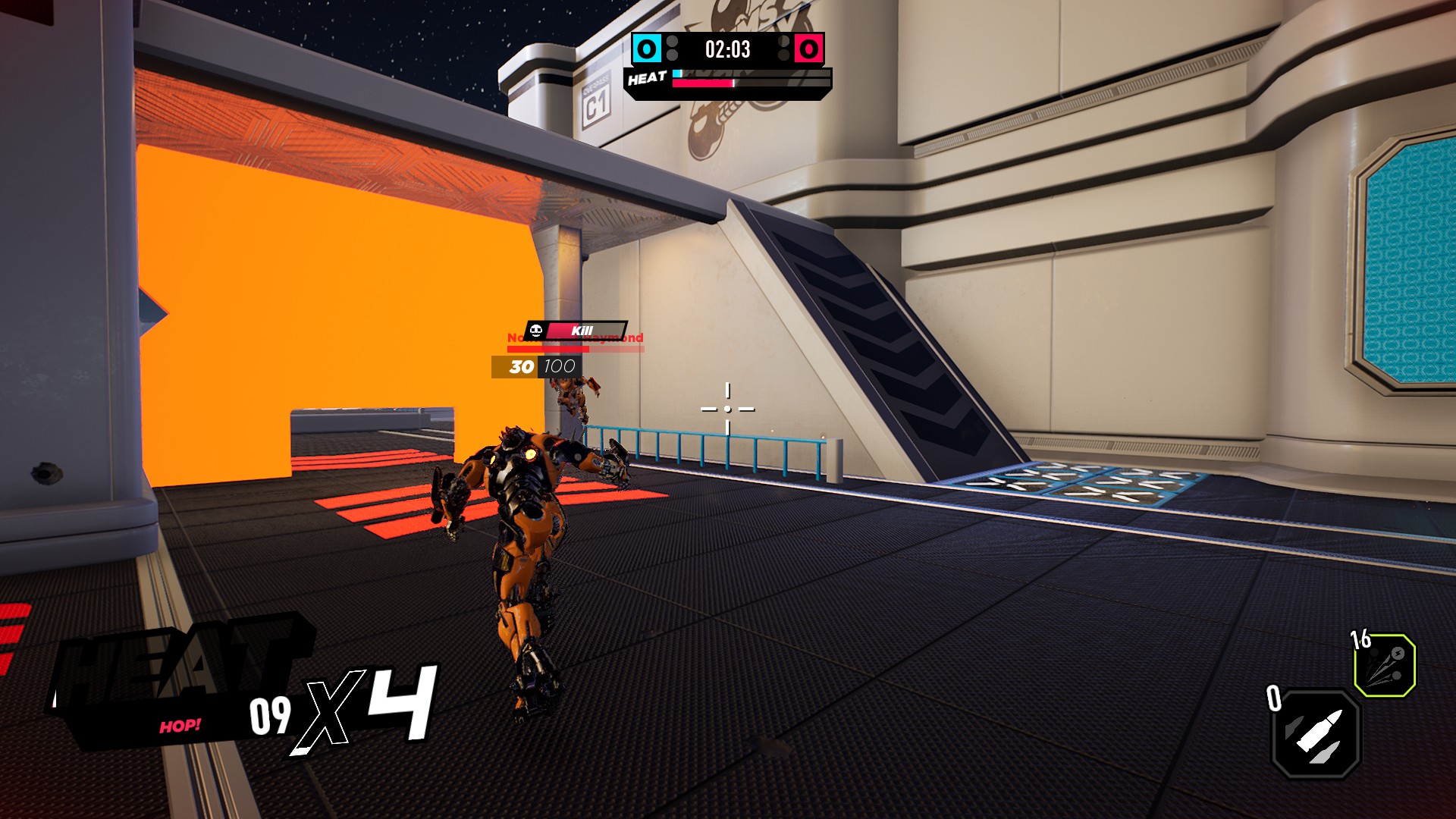 You can also score points by shooting at the the other robots who are trying to do the same thing. This violence feels at odds with the peaceful ambition of everyone to do some nice tricks along some floating platforms. In fact, it always felt wrong to pull the trigger on a player who was simply trying to thread together a couple of gnarly slides and tubular hops, to force them to break the heat multiplier they were working on and resort to the more primitive tactic of just circling around one another and firing our guns until one person died.

Marrying the acrobatics and the combat of Overstep will take some real doing, as right now both are about as incompatible as – if you’ll allow me to alt-tab away from this Google Doc to choose an appropriately topical simile from the BBC front page – British cave divers and billionaire space barons. The reason why the two basic elements of this game don’t gel are clear from the outset. Of the several methods you’ve got of building heat, all but one of them involve skidding and sliding about on fixed, shared elements of the map – along rails and walls, under doors and over launchpads – all positioned by a level designer in such a way as to encourage stringing together moves and building up a heat multiplier. 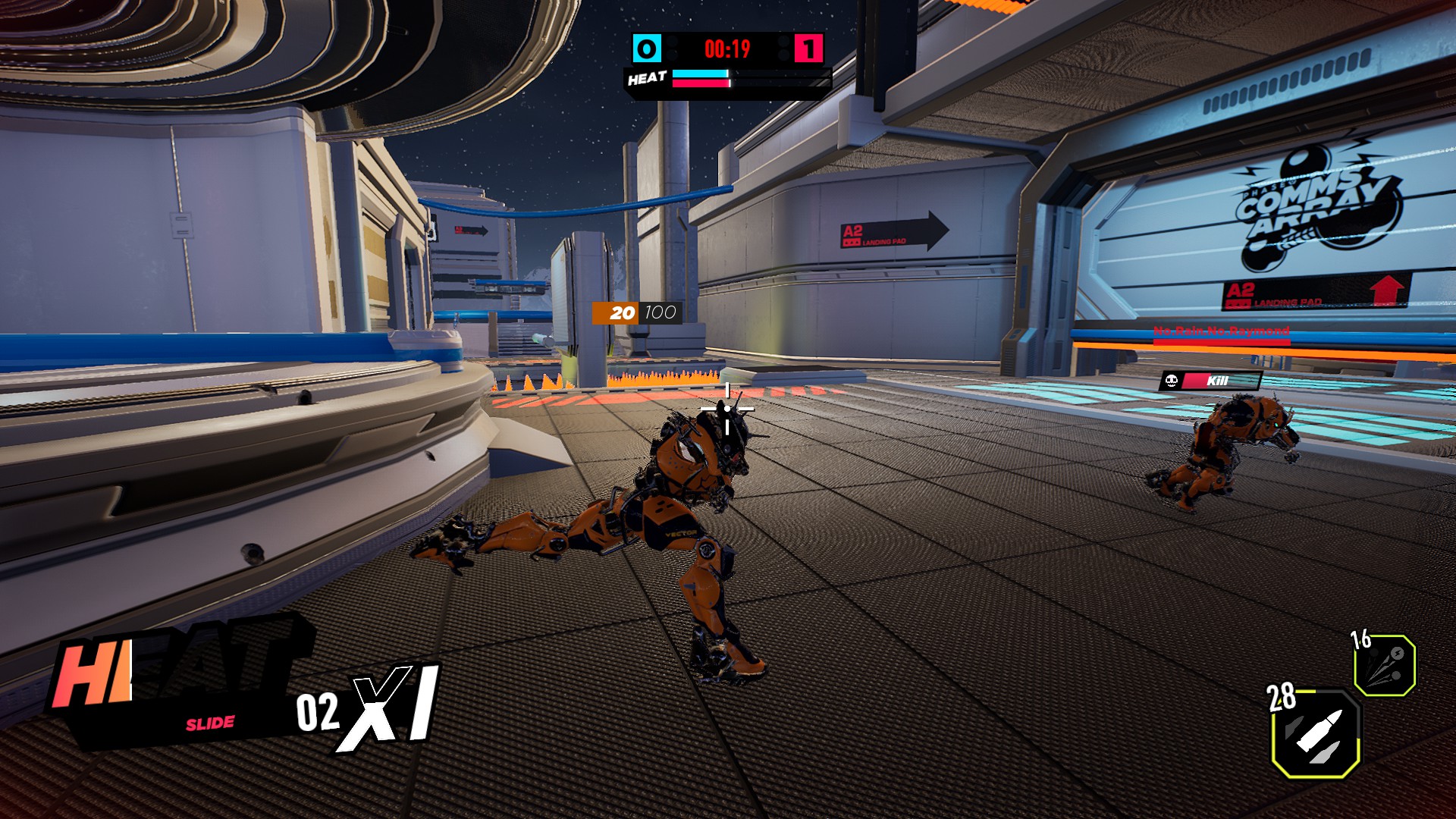 Fighting another player builds heat while also interrupting your opponent, and so naturally offers a greater reward than plain parkour. But by their very nature, other players move around the level, rarely situating themselves in a spot on the map where you could practically work them into a nice bit of free running. The combat interrupts the acrobatics. And the acrobatics do not accommodate the combat. It would be like a Tony Hawk map having a single bench that ran around the skatepark like a lost dog, but which gave you a billion points if you could manage to find it and ollie off it.

But Overstep’s problems in Early Access start long before we even get to the fundamental problem with how its two halves hang together. It’s buggy, there’s only one map, one mode and one robot, matchmaking struggles to bring two players together, let alone four, the physics are floaty, the freerunning janky, and there are ridiculous instadeath lava pools and yawning voids to tumble into. There’s a lot to get done in the 12 to 18 months before launch. 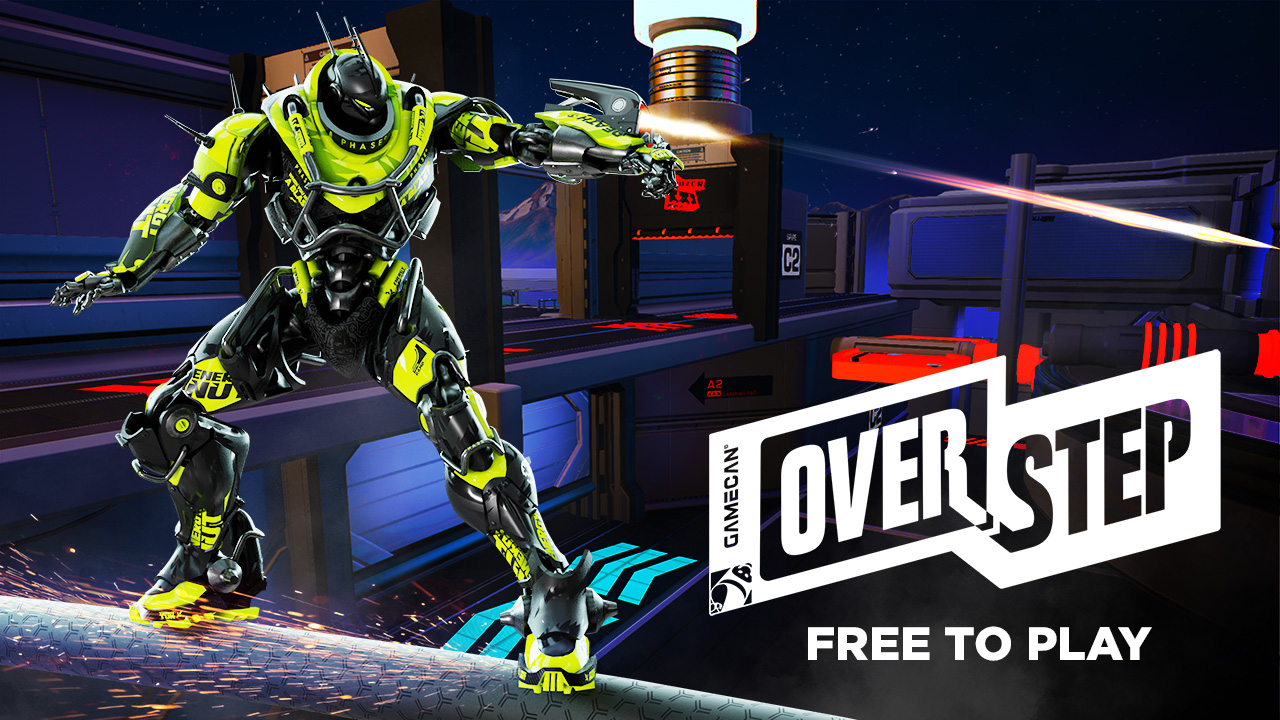 For now, the fun starts and ends with the sight of the impossibly proportioned chassis of the game’s eight-foot tall robot on the main screen, a robot who has honest-to-god handles bolted onto their crotch, and whose chest gently heaves as though they’re breathing hot digital breaths. Why does this lungless golem breathe so, if not to draw me closer? Sorry, as if there’s any universe in which I was not supposed to want to have full sex with this thing.