Overthinking Games runs every other Monday, and is an opportunity for Malindy Hetfeld to take something about a game and think about it too much. Today she's gotten really into the banner in The Banner Saga.

Banners, then and now, are often a curious amalgamation of plain communication and naked aggression. They’re well-known as heraldic devices, displaying a coat of arms to identify one side to the other on the battlefield, usually just before they were about to attack each other. However, they’re also just a means of communicating who or what a place or thing belongs to. If you’re shipwrecked, the flags on the boat responding to your frantic SOS can tell you where you are and who is about to rescue you. Even today, flags are used this way. Ships still use flag signalling to send messages without the need for radios. Warships still hoist battle ensigns, huge flags to stand out in the smoke and chaos of a pitched battle, showing that a ship is ready to fight, and which side it’s on.

In The Banner Saga, every clan, including your own, has a banner that flies overhead as you travel. But there isn’t as much talk about the clan's actual, physical banner as there is about what it represents: forging unity from the lack thereof, creating a clan rather than fighting others, and the rite of passing on stories to later generations.

The Banner Saga doesn’t use its banners as a colourful warning signs, nor, exactly, as national flags. They’re kind of more like city flags, identifying clans to one another. (City flags aren’t in common use nowadays; you might miss yours entirely unless you look it up on Wikipedia.) But still, a city flag doesn’t describe the same allegiance a clan banner does. In 2019 people can move from one city to another easily enough, so identity isn’t anchored in place of residence as much. In the world of The Banner Saga, the place an individual was born is an important factor. It’s a very real home, where their fathers and forefathers lived, and where people depended on each other -- the latter not least due to the a feudalistic social structure that makes one group of people tenants and workers of another. 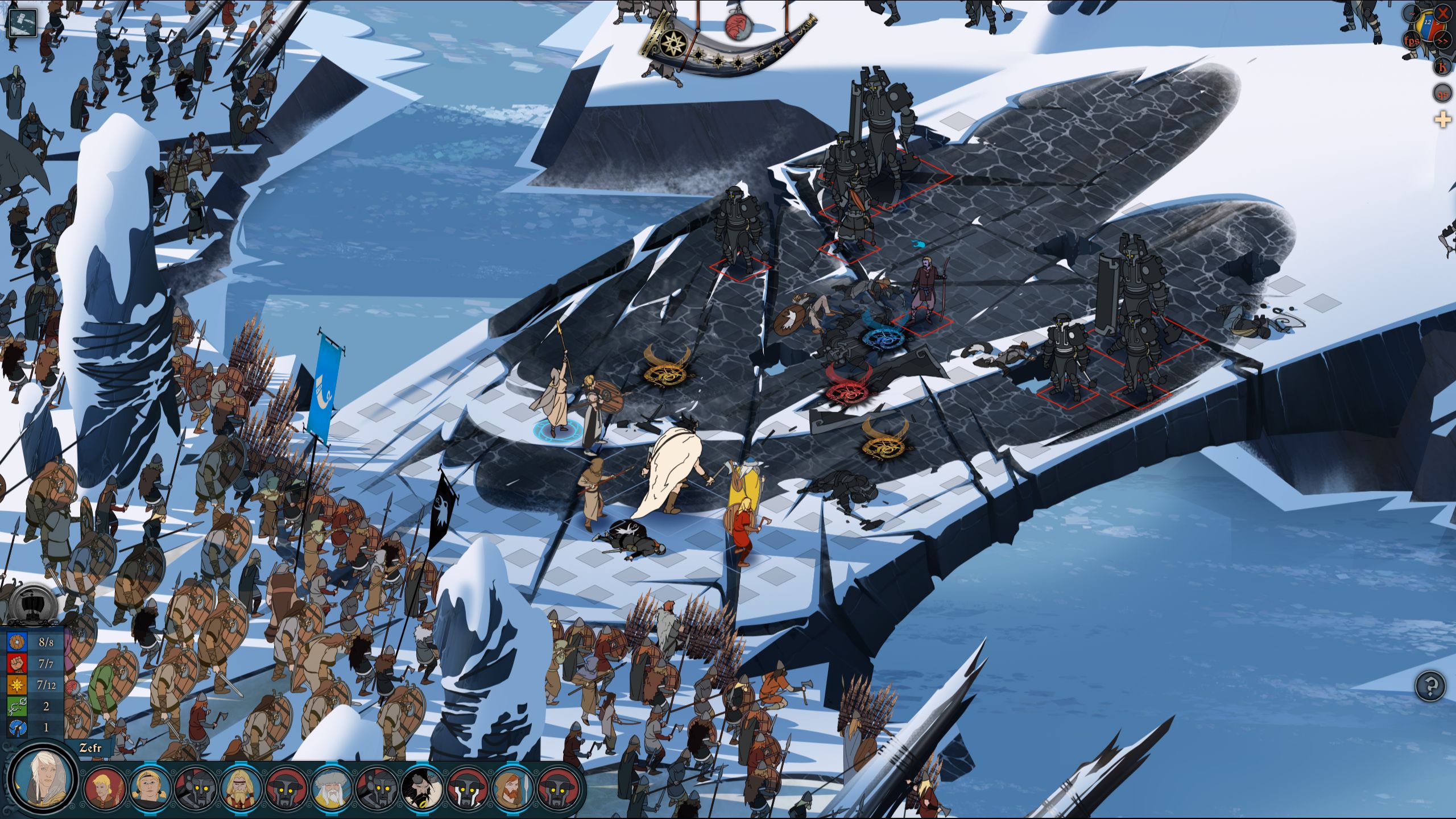 Nothing short of mortal peril makes people leave their clan in The Banner Saga, but people who lose trust in their clan leaders or fear starvation and disease don’t just go off on their own, they look for a new banner to live under instead. They literally add to the banner: it’s used to tell the collective tale of the clan and record events, so as the clan grows, it too gets longer and longer, visible from far away. For Rook or Alette, depending who you’re playing as, that in turn means added responsibility – leaving your community and joining another is not a snapshot decision, it’s a life altering one, and the game is all about keeping the clansmen under your banner safe.

This is a very unifying interpretation of what Viking banners may actually have been like. Picutre those fearsome longships coming across the ocean, announcing the arrival of the enemy with massive flags, feels more the Viking’s speed. There are few primary sources on actual Viking banners, but there is one image that has captured modern imaginations: the Raven Banner. According to The Annals of St. Neots, an Anglo-Saxon historical record written a few hundred years after the event, the raven appeared on one group’s banners as part of a coalition attack on England known as the Great Heathen Army:

Representing the god Odin, the raven was a powerful symbol in Viking society. More than a statement of intent, the banners allowed the Vikings to carry Odin with them, and believed him to be magically present in their banner somehow, as if he actually helped them in battle. 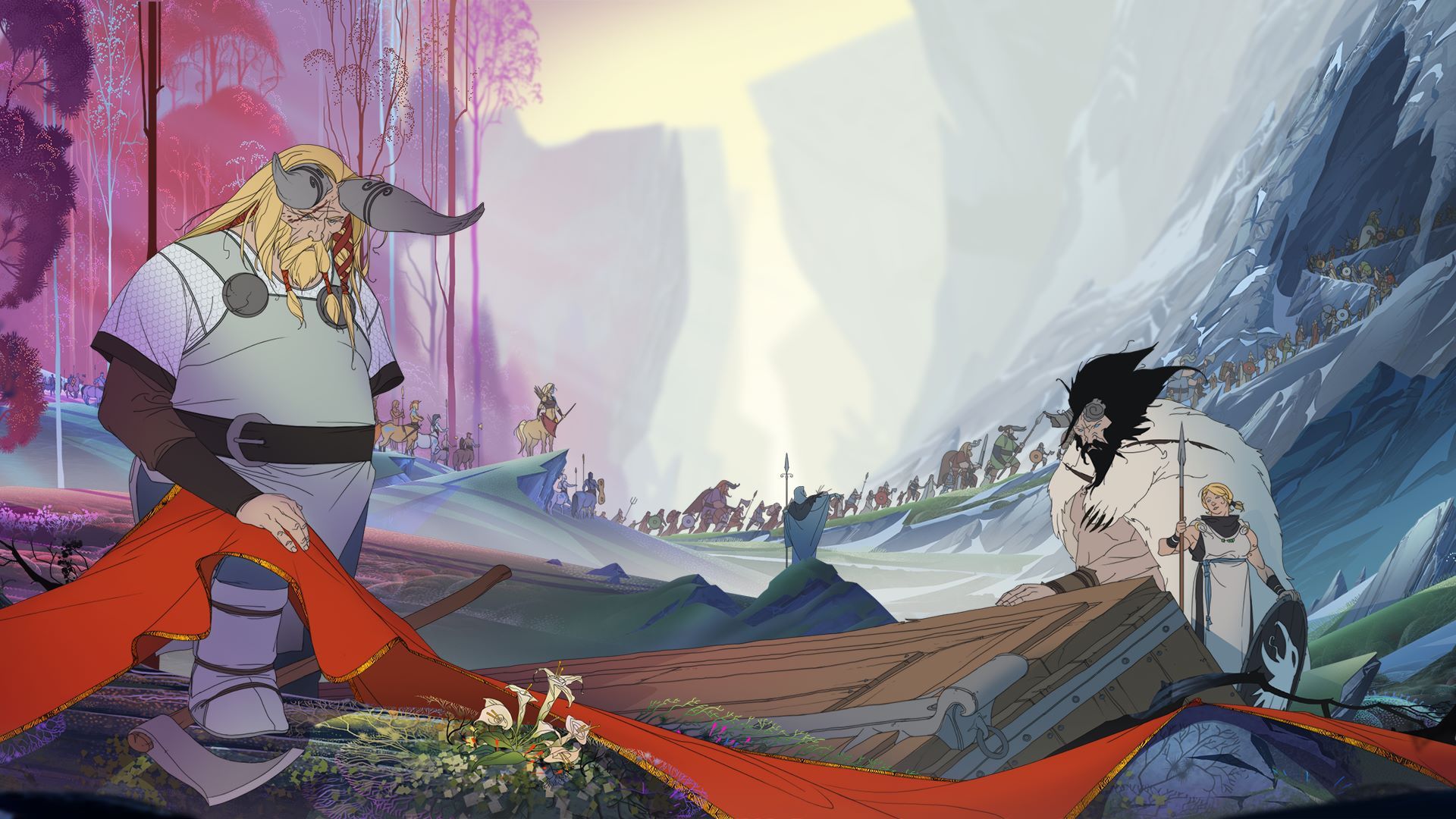 Taking this into account, the minimal physical presence the banner has in a series called The Banner Saga makes sense; this fantasy isn’t about the rather bloodthirsty Vikings we’ve heard so much about (though the race of horned giants, the Varl, do embody that idea more closely). No, the clans in The Banner Saga aren’t on the way to battle. If anything, they try to get away from it as fast as humanly possible. They meet creatures along the way who aren’t used to living under a banner, and who often act as a threat to the united way of life the clan has built. Battles are defensive rather than aggressive; the clan is fighting for survival, not conquest.

Because the banner is a means of passing on history, as events that shape the clan are woven into the tapestry of the banner, it further cements the affiliation of individuals in the clan’s story. That idea may actually come from the Norns, three wise women in Norse mythology that the character Juno is also inspired by. The Norns literally weave fate, charting peoples’ destiny. They write stories with thread, the same way people do in The Banner Saga.

It might not always be easy to unify people from different walks of life under one banner, but in The Banner Saga your strength comes from the combined effort of all the different people and creatures who fell on hard times and decided to follow you. That strength is what The Banner Saga’s titular fancy flag really represents. The banner is about getting along, not conquering a foreign enemy.