Crafting has always been important in Path Of Exile, and the Synthesis expansion will let players assemble their own custom dungeons in Grinding Gear's free-to-play action RPG. Due on March 8th and (partially) supplanting the Betrayal league, Synthesis will send players into a fragmented dream-world to recover the memories of Cavas, a new ghostly character. Players will collect dream-dungeon fragments and assemble them on a board game-like map to bridge gaps across the void, and maybe pick up some fancy new craftable gear in the process. See the trailer below.

For the three months that the Synthesis league will run, every area of the regular world map will contain a portal to a memory - a timed, miniature side-dungeon. Players need to rush through these before they're consumed by a blue, swirling void, and activate several Memory Stabilisers. Hit enough and you're rewarded with loot, plus a Memory Fragment. These fragments - each representing a section of map, with various environment types and up to four entry/exit points - can be assembled into custom dungeons in the Memory Nexus, Cavas's domain.

In the Nexus, players will find the Memory Map. Some of it already filled, but most of it empty. Players will use their collected fragments to bridge the gaps through the void from their start point to intended destinations. Some areas have big rewards to be earned, and the more memories you chain together, the higher the overall difficulty of your custom dungeon, but the better the rewards. Each of your memory fragments can only be traversed a few times before crumbling away, however, so you'll need to continue the main story to rustle up extra dungeon parts.

While Path Of Exile has had slightly customisable dungeons in its endgame via the mapping system, this seems more involved and granular, and available from the start. Rather than just generate a map of a single type with modifiers for that specific encounter, you're assembling a more varied dungeon from fragments. You'll know the way to the end and to loot each time you run through it, but eventually it'll decay and need reworking. Boss encounters in particular disappear from the map after being cleared, although it sounds like hunting these new baddies will move Cavas's personal story forward, too. 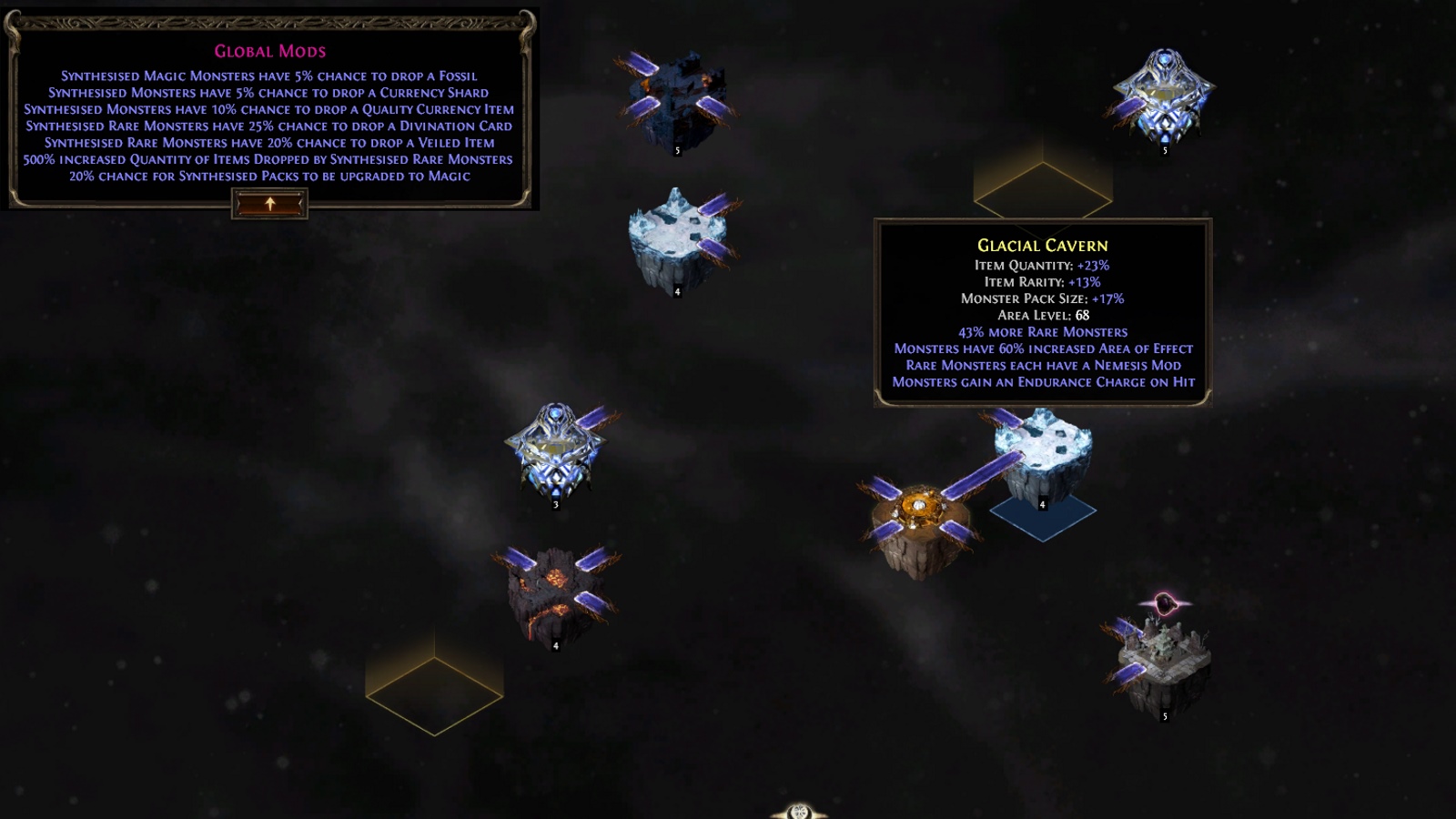 This wouldn't be Path Of Exile without new loot, of course. On top of the usual bunch of new unique items (including one that slows time in a bubble around you when you take damage), you can find Fractured items inside these memories. While decent by themselves, three of the same type of Fractured item can be combined to create Synthesised gear - new basic equipment types with special modifiers based on what fragments you fed into the synthesis machine. While this is aimed mostly at higher-level players, it's theoretically possible to craft some very specialised new gear out of these Synthesised base items.

Unlike previous leagues, nothing is disappearing from the game with the debut of Synthesis, just getting shuffled deeper into the deck. Jun Ortoi and her Shadow Of Mordor-ish web of Betrayal assassination targets will still be available, though not until quite late into the main story. While less frequent, when you do stumble upon Immortal Syndicate activity it will be more concentrated, with several enemy officers active in a single zone. The Betrayal league stuff (including Delves, hunting to fill out your Bestiary and Incursions across time and space) are also to remain permanently. 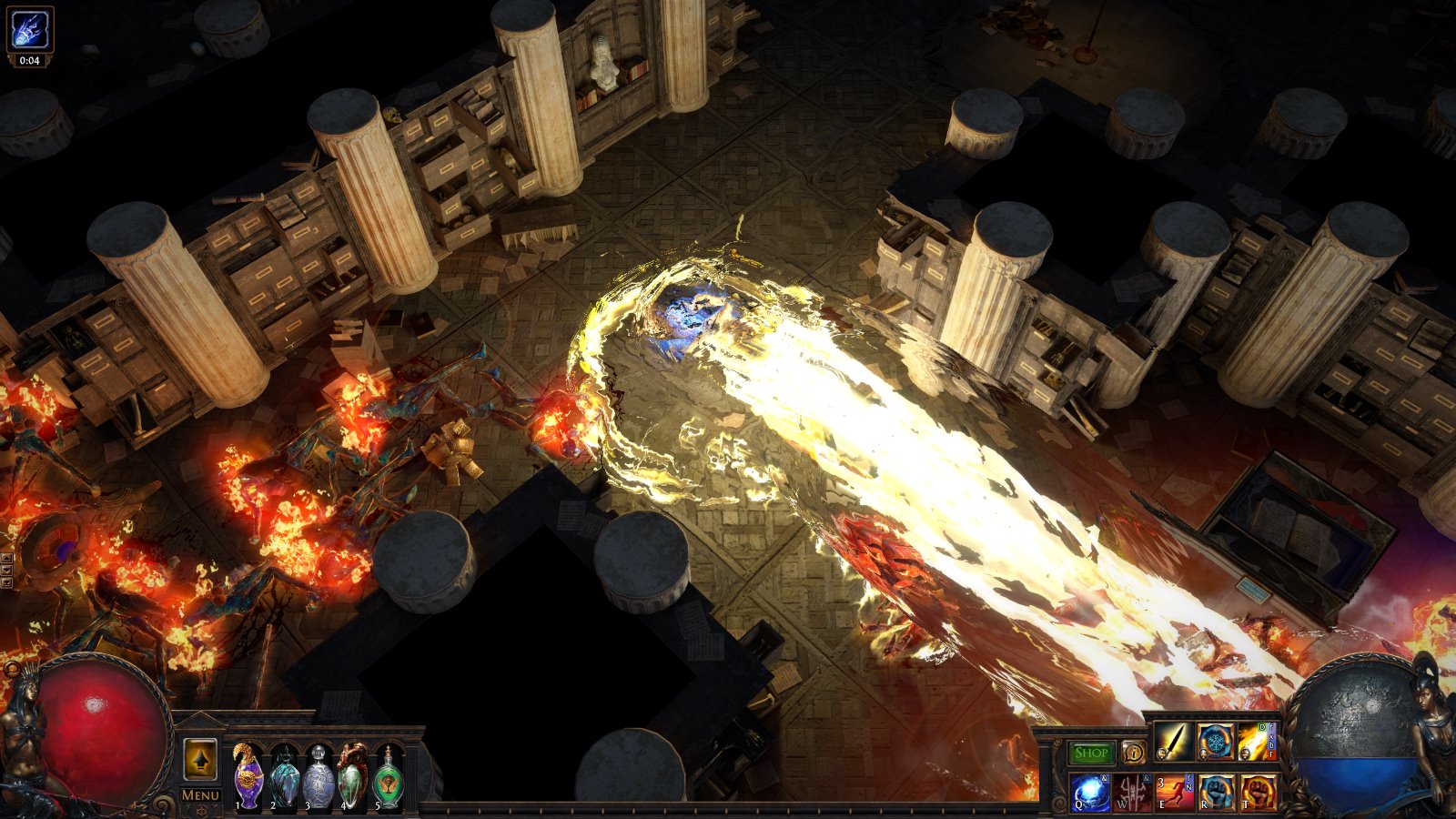 The other permanent change coming with Synthesis is a major re-balance to spellcasting, with the aim to get players using more spells, and casting them directly. Accepted wisdom at the moment is that you're best off only using a handful of spells, and summoning totems or traps to cast them for you. There'll now be new support gems to boost 'handcasting', plus six new spells, split between Holy and Chaos magic. Of these, I most want to try Divine Ire, a big holy beam that needs charging up, and charges faster when more enemies are nearby - a fun risk/reward balance.

While I doubt Synthesis will have quite the same impact as the Betrayal league, it's adding yet another way to play around with the game's complex web of systems. Path Of Exile is designed to be replayed time and time again, and having it refreshed every three months with a new system weaved through its main story keeps me coming back. It's not just me, either - as with the similarly free-to-play Warframe, Path Of Exile's player-base grows with every major patch. There's even a convention planned for November in New Zealand, and a "mega-expansion" planned for next year.

The Synthesis league begins on March 8th, and will require you to roll a new character to explore fully. You can read more about it on its official page here. Some cosmetic gubbins aside, Path Of Exile remains entirely free to play, expansions and all. Find it here or on Steam.