Everything I'd read about Phantom Doctrine excited me. Unravelling Cold War conspiracies in a spy-flavoured XCOM was an enthralling elevator pitch, and the details seemed to back up that promise. Yes, you can brainwash enemy agents and yes, your enemy can do the same. Yes, there's an emphasis on stealth and deception, employed on both a strategic management layer and through tactical turn-based missions that don't always devolve into firefights. Yes, part of the game involves cracking case files to investigate sinister threats.

Is any of that actually any fun? Nope.

You play as either a CIA or KGB agent, although either way you operate outside of those organisations. You're in charge of what becomes The Cabal, a group with an even dodgier name than the "Beholder" organisation that you spend the game investigating. Plotwise, it's hard to say much more than that - partly because of spoilers, but mostly because the story almost entirely failed to engage me.

I wanted it to! Spy thrillers aren't normally my thing, but reading previews had built up my appetite for one. A minute into the opening cutscene, though, and I'd already had more than my fill of badly delivered conspiracy natter. Missions quickly boiled down to being sent off to places for generic spy reasons, then getting up to generic spy stuff. Steal those files. Disarm those bombs. 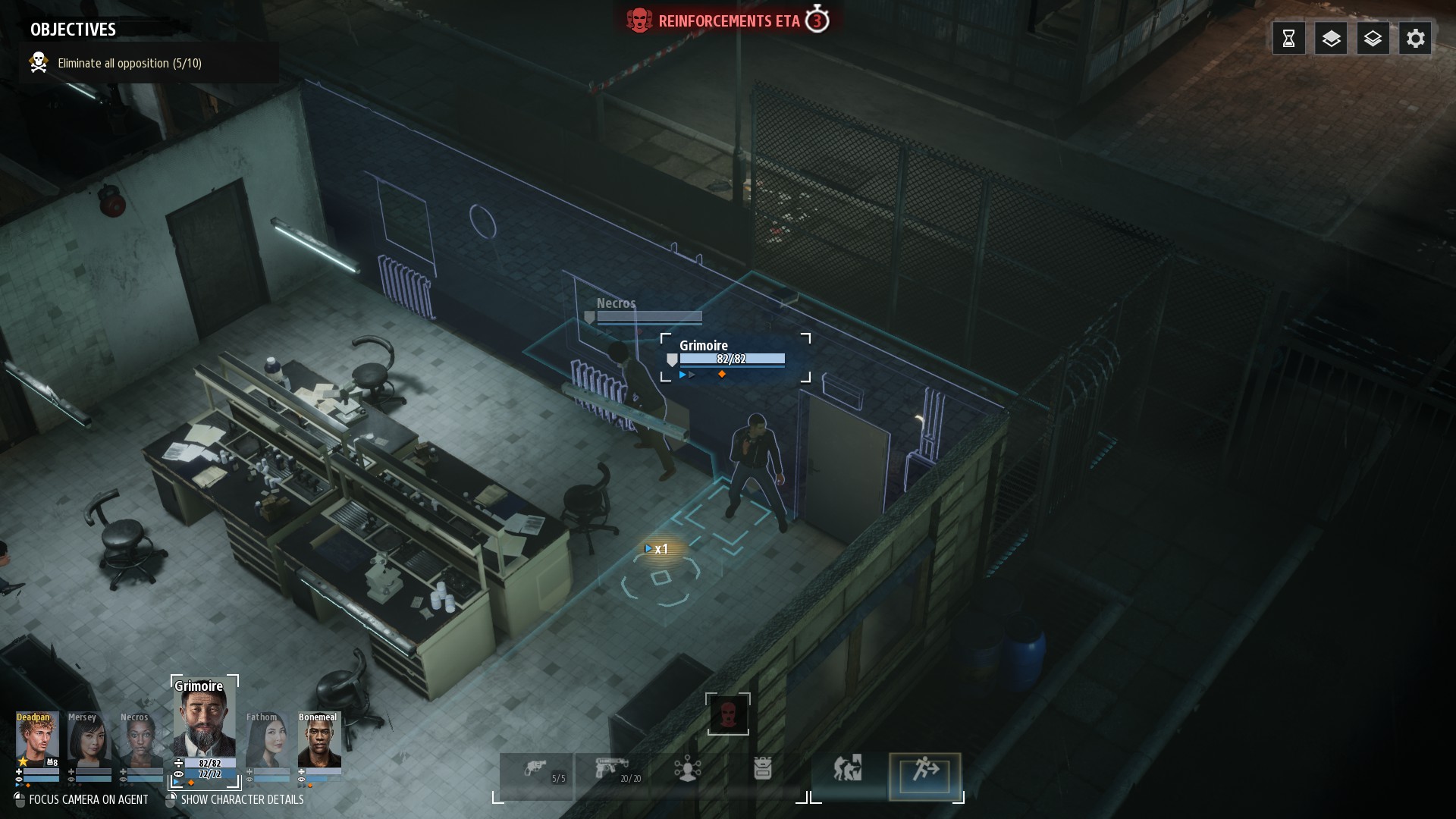 On one occasion an agent sounded bored and exasperated when it was revealed I'd walked into a trap, mirroring my feelings exactly. Playing as the KGB has the advantage of disguising lacklustre acting in Russian, though if you do want to keep track of what's happening you'll have to spend longer on each mission as you stop to read what's being said. You will not want to spend longer on each mission.

They're either trivially easy or infuriatingly difficult, but they never provide an interesting challenge. As with XCOM, units typically spend their turns moving then shooting, using equipment or activating special abilities. Unlike XCOM, chance plays a much smaller role. It's not a dice that determines whether a bullet will hit or how much damage it will do, but an awareness bar. Awareness acts as both armour and a resource for using abilities: if the bar is full, then incoming shots will do a minimal amount of damage or miss entirely. If it's empty, those bullets will tear into an agent's health rather than their awareness.

As with all things Phantom Doctrine, it's a concept I was initially intrigued by but quickly wound up frustrated with. Weighing up whether to use your awareness on a headshot that will leave that agent vulnerable is an interesting decision, but that's not enough to make up for how the system winds up draining battles of their tension. Rather than holding my breath as my units took aim, I knew what every bullet was going to accomplish. Without chance to spice up the action, it tasted bland. 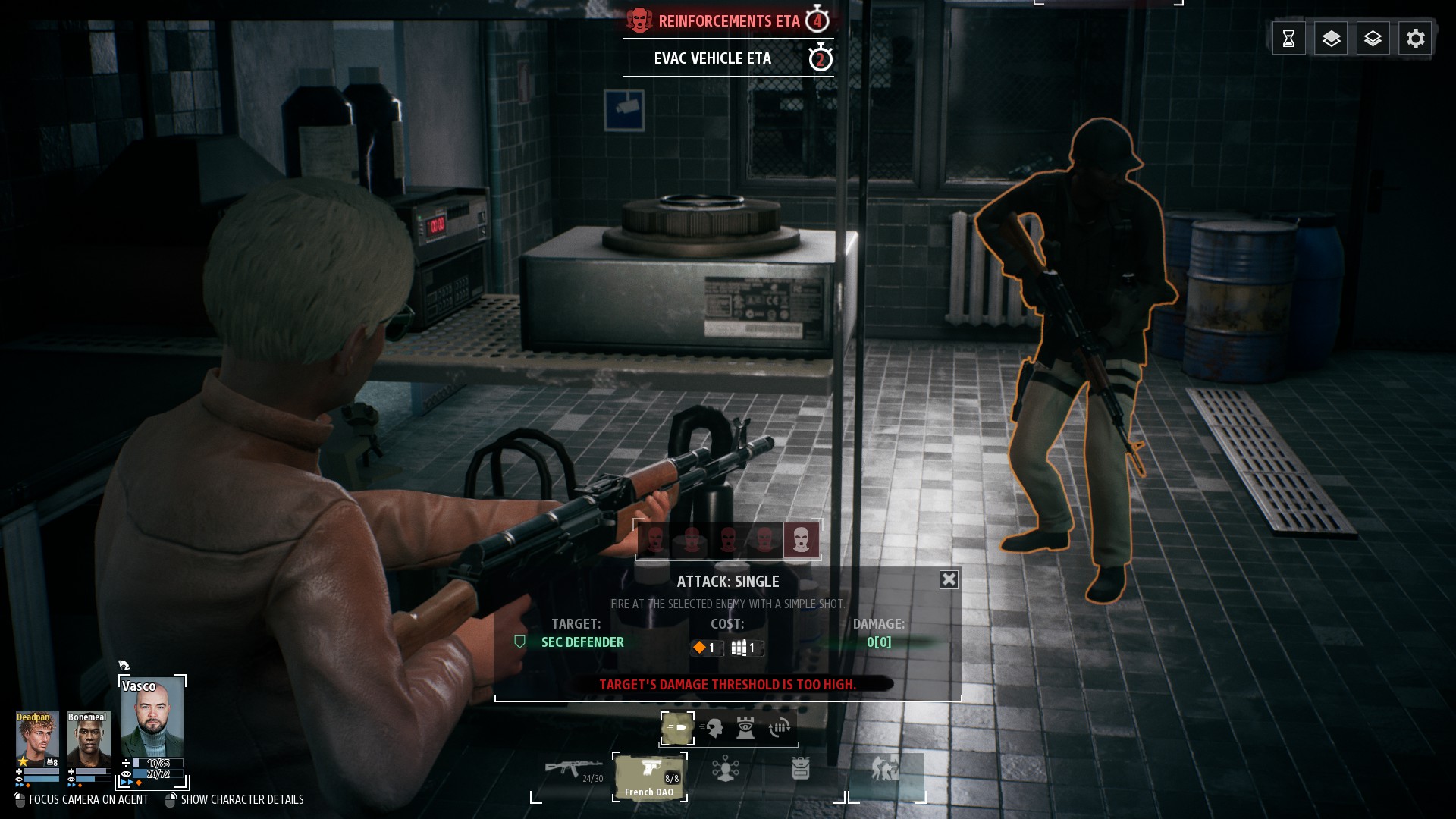 That's a fundamental problem with combat, and it's not the only one. There's no indication as to whether a unit will be able to fire at an enemy before you've moved them to a new spot, which cast a headachey uncertainty over every order and resulted in much gnashing of teeth and loading of saves.

Exciting abilities and distinctive weapons might have helped, but both are lacking. The Cold War is a more restrained setting than XCOM's, but there's definitely space for spy gizmos that hasn't been explored. Running faster and preventing an enemy from firing for a turn are two representatively underwhelming abilities, and while the weapon types do have different characteristics they seldom altered my plans for each unit. Those units level up, but they all choose from the same pool of perks that don't significantly change their capabilities.

There's an exception to that, which brings me back to what makes missions trivially easy. If you send a couple of agents to recon a mission, you then get to start that mission with two agents having already infiltrated the area wearing disguises. That means they can safely stroll past guards and security cameras, and are only rumbled if they're spotted by special enemy agents - but not if they've got the right perk. Once I discovered that, I fell into using the same tactic on every single outing. Let me introduce you to the cleaners. 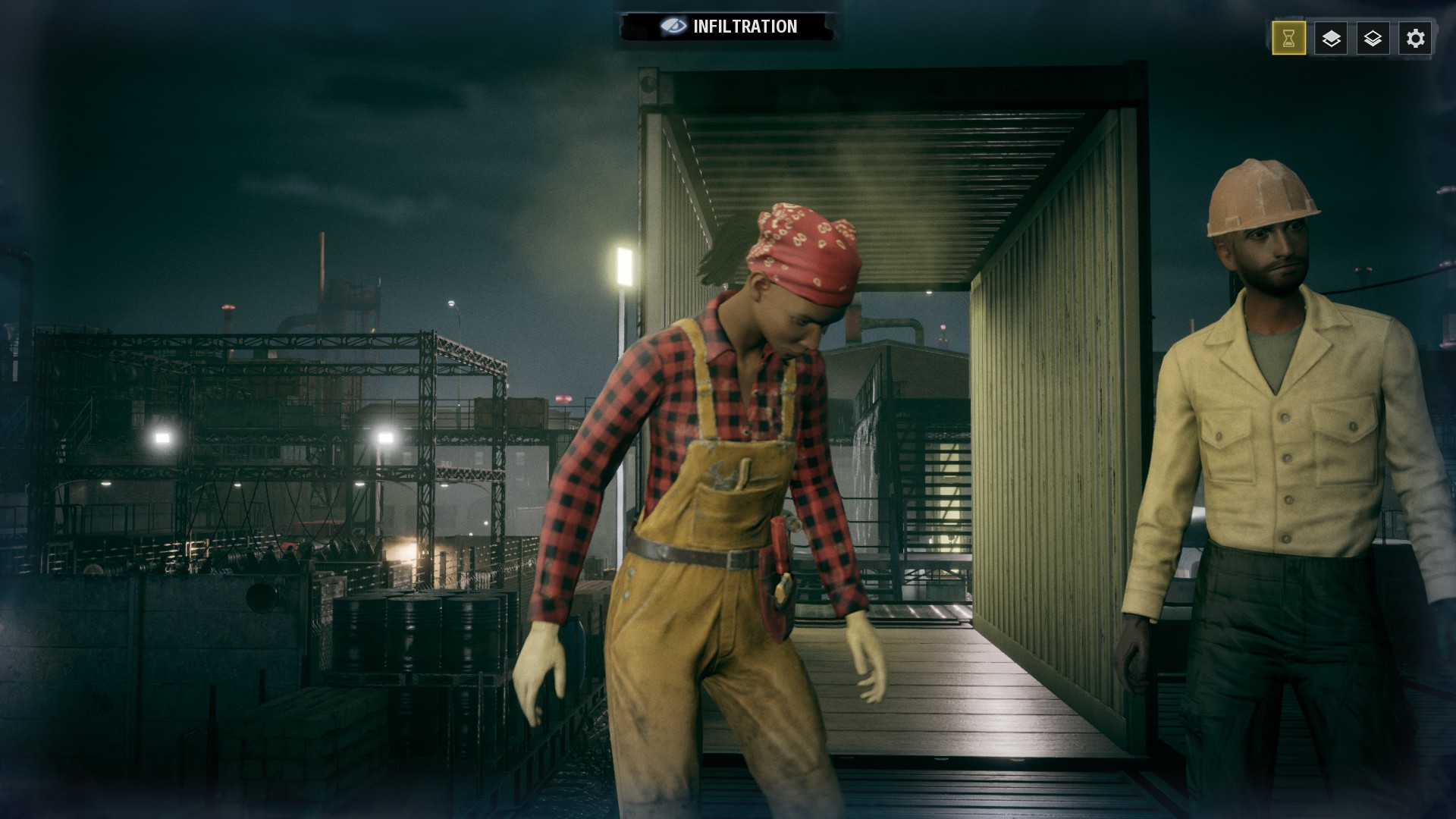 The cleaners are brutally effective, but gosh are they boring. Each turn, they walk into a new room together. Each turn, one of them uses a silent takedown on an unsuspecting enemy, and then the other uses their action to magically hide the body. They can usually do this in a crowded room, picking off targets that aren't in anybody else's eyeline. They turn espionage into busywork.

After a while, I stopped bothering to even bring in my other agents because the only thing they brought to the table was extra faff. Occasionally, the cleaners would would run into a hiccup - you can only perform takedowns on enemies with lower health than the take downer. Normally they could just ignore those beefcakes, but on the (depressingly frequent) missions where the aim was to eliminate every opponent, all they needed to do was save those enemies until last. Eventually I built a facility that let me inject them with health-boosting chemicals and didn't even need to do that. 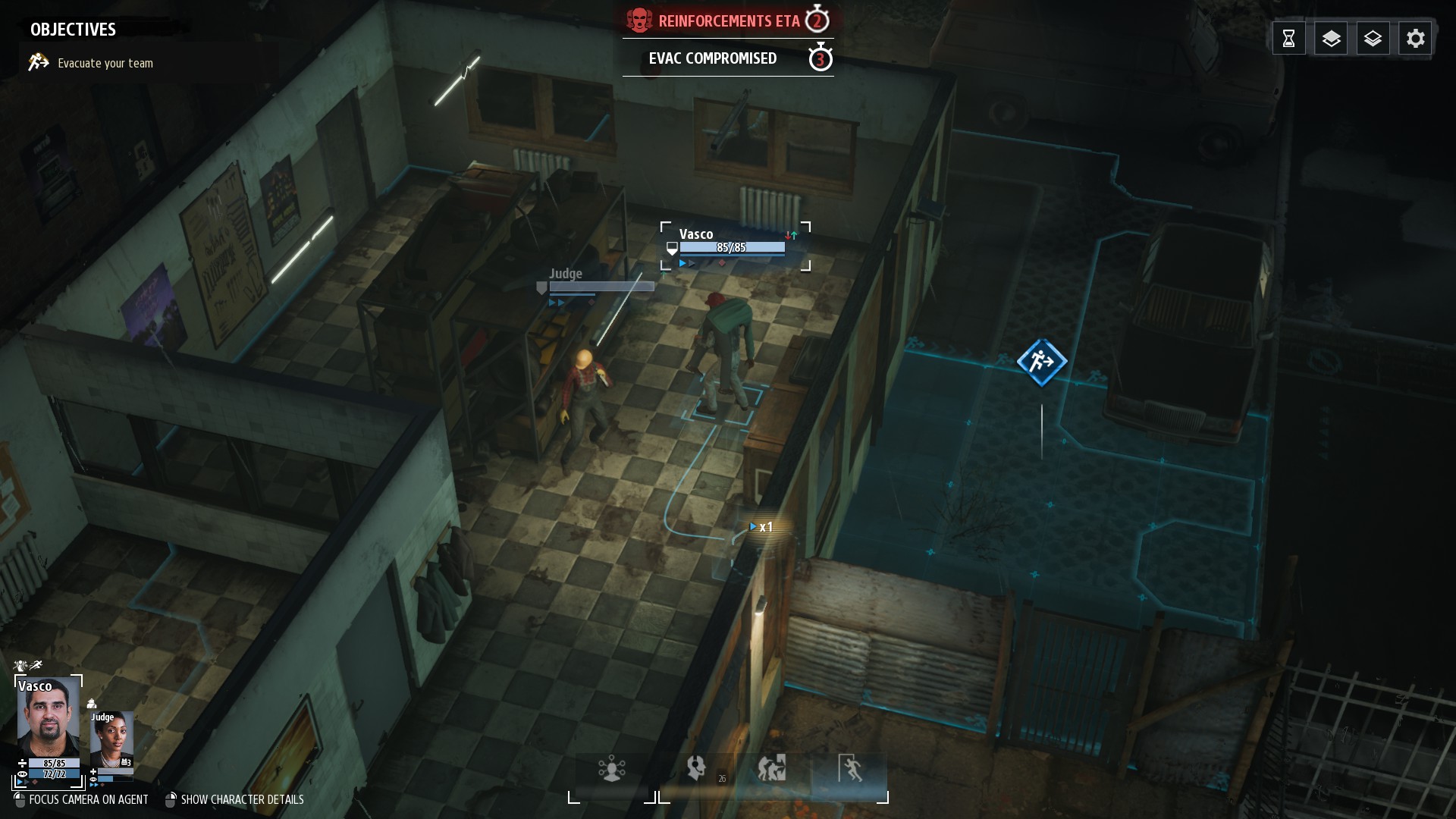 That's one of several unlocockable facilities, in addition to a couple that you start with. One of the unlockable ones lets you interrogate, convert and indoctrinate captured enemy agents. You acquire more options as the game goes on, including what must be Phantom Doctrine's snazziest feature. Once you can afford to, you can indoctrinate a captured spy with a codeword, then release them back into the wild. When you encounter them again, you can flip them to your side.

I never bothered using it. My cleaners were enough.

From the start you have a workshop where you craft new items and research upgrades that affect the strategic layer, like increasing your income or the frequency of informants that appear on the global map. Those informants give you files which you can also laboriously collect on missions, before you laboriously go through them on the investigation board.

In Phantom Doctrine, unpicking a tangled web of conspiracy does not involve applying a skill. You just need to scan documents for key names, then connect documents with the same words until a message pops up informing you you've cracked the case. Those are usually boring snippets of heavily redacted communication, worthy of a chuckle at the outlandish codenames but little more. 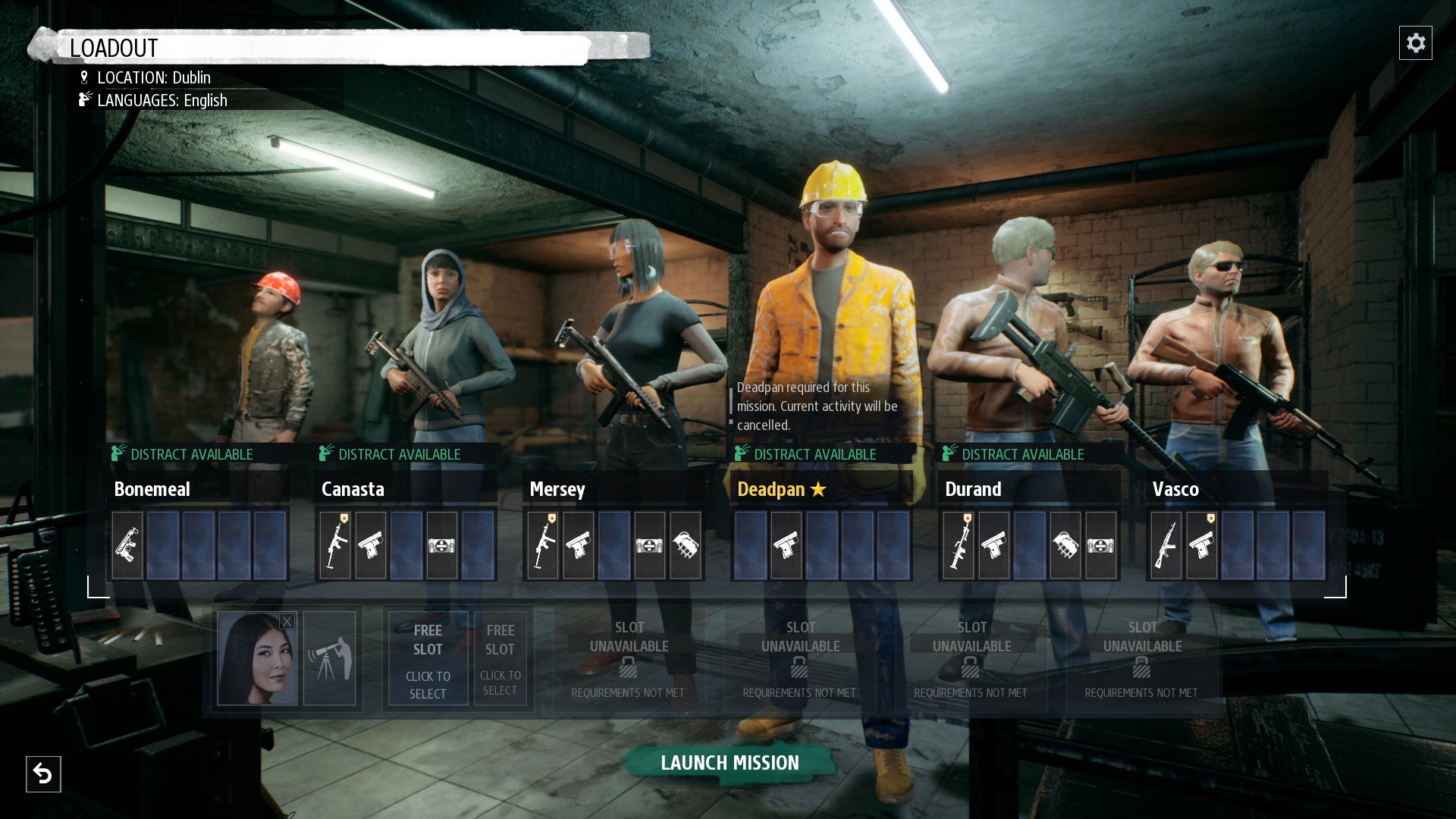 There's plenty to manage in your base, from crafting items to clicking agents into slots that automatically work the investigation board for you. It feels like administration, and the layer where you dispatch spies around the world does too. Little decisions involving your agents sometimes pop up with the promise of being interesting, but they crop up sparsely and are written more sparsely still. One of my agents got depressed, I couldn't afford to give him time off, and a while later he killed himself. Another one got cancer.

Maybe I'd have cared about those agents if I hadn't felt ostracised from the story, but it's not just that. It's hard to invest in a fantasy where the people I’m doing spy shit against are terrible at countering spy shit. My shadowy foes leave prisoners in random rooms with just one easily disabled camera watching them. They stand around as people gallivant about their secret bases, smashing through windows and disabling the laser security systems they’re standing right next to. They're never suspicious of the cleaners. 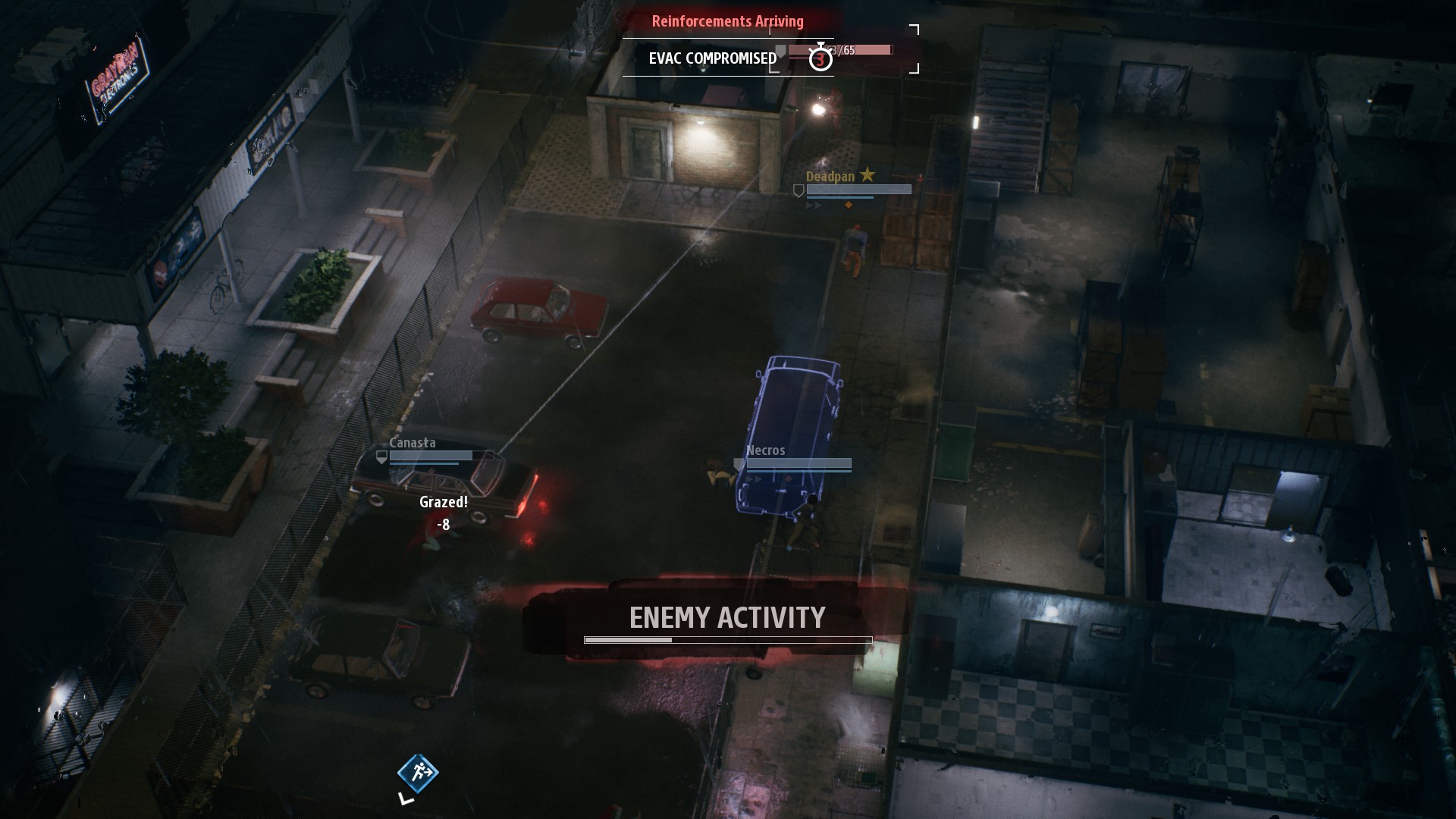 I did have one agent fleece me for several thousand dollars, then defect to the other side. Maybe I could have told you a cool story where I captured her and converted her back, but that wasn't to be. A bug meant that I'd have to load a save from several hours before to progress that plot, and at that I stopped playing. I had a fair few crashes too, and on one occasion I had to repeatedly load a save when the "enemy activity" bar got stuck, presumably because a guard I couldn’t see kept stumbling into a pot plant or something.

The AI often bumbles around making odd decisions, like not firing at a guy I'd left standing in the open with a casualty slung over his shoulder. Such technical errors compound the design ones, which usually revolve around not being told stuff that I should be. A perk made "snap shots" no longer end an agent's turn, but at no point was it mentioned what a snap shot was. For maybe 20% of shots, the camera lined up in such a way that I couldn't see my target's health. If you're discovered on a mission, reinforcements flow in - at an undisclosed location, sometimes right on top of your squad. Instead of reinforcements, sometimes a helicopter will hover above threatening to “shoot at any agents in the open without warning”. There is a warning. That tooltip was flat out wrong, and I spent much of the game hindered by it. 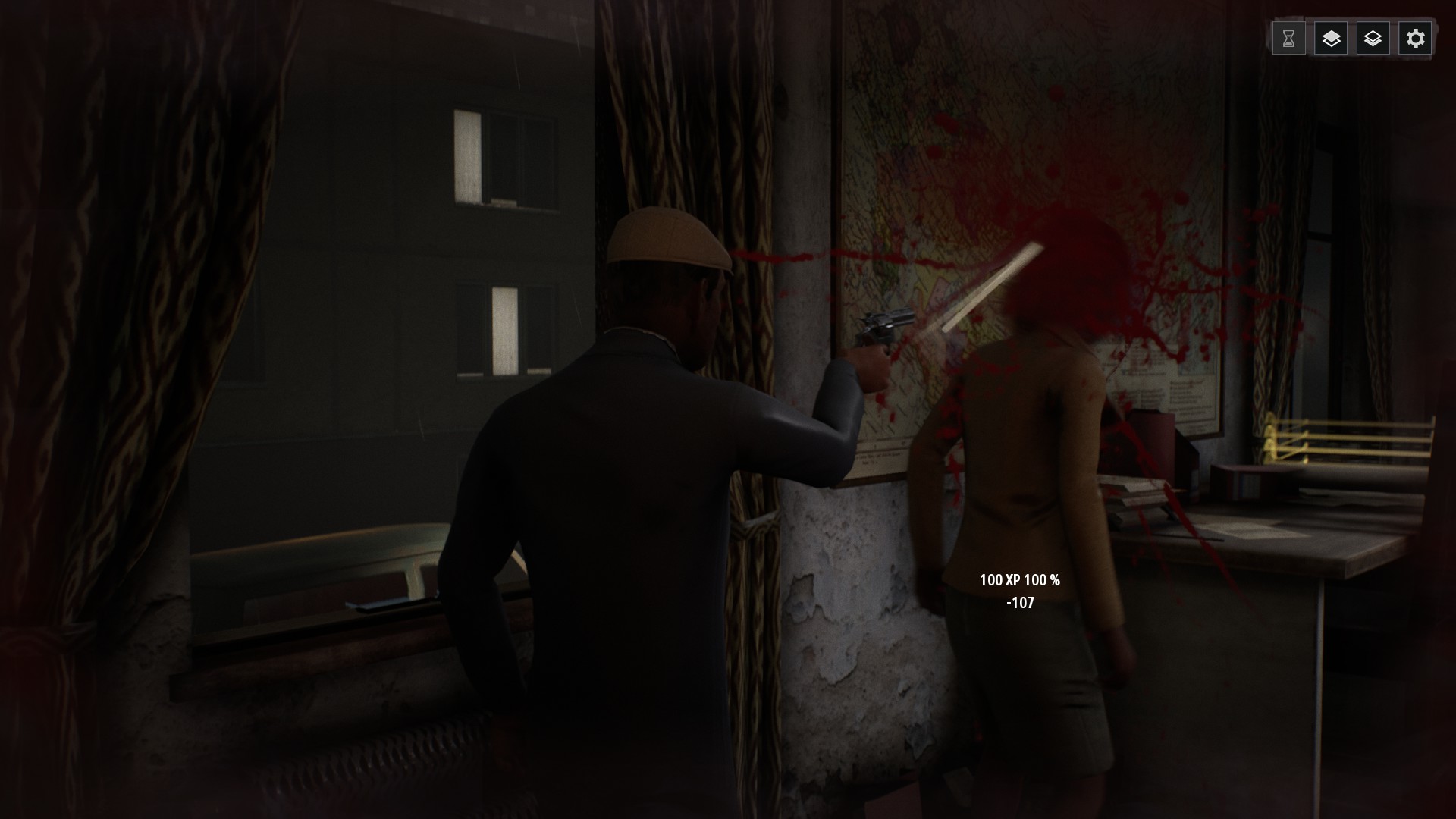 For a game about spies, Phantom Doctrine is atrocious at providing you with information. It doesn’t set up its pieces in an interesting way, it just pretends to - and while it has some neat ideas I haven't gone into detail on, that's because I so rarely needed to engage with them.