Playerunknown’s Battlegrounds has long struggled with cheaters, popping up from nowhere to headshot you from across the map and possibly through some walls. For 16 months, the developers have been posting weekly accounts listing how many players they've permanently banned for cheating – a number that now adds up to over 13 million. That's about as many people as live in the whole nation of Greece, for reference.

The numbers were crunched on Reddit by a user called sjk045, using information from the Official Korean Plunkbat blog. They even created a graph to help visualise the number of bans, including a glaring spike that represents 1 million bans (about the population of Cyprus) in a single week. After that, though, the rate of bans seems to have been dropping pretty steadily. 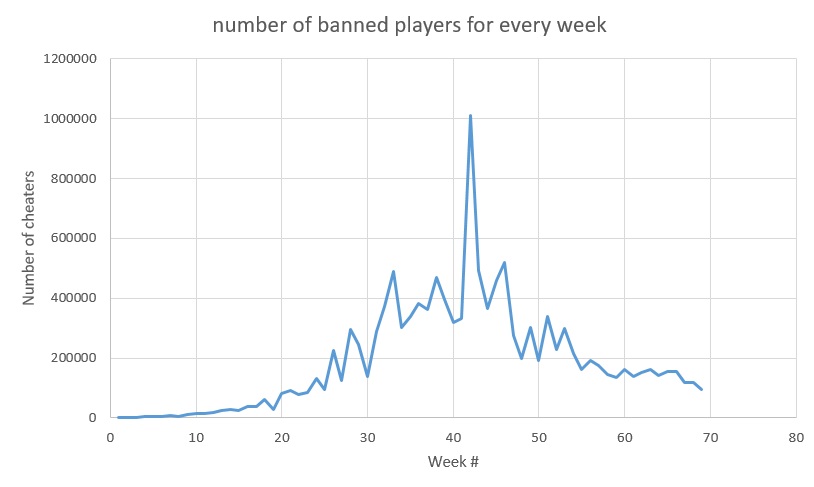 However, as they point out, this doesn’t necessarily mean that there’s a lower ratio of cheaters to honest players; possibly it’s just reflective of falling player counts in general.

With the game having hit 50 million copies sold in June, 13 million cheaters is a pretty high percentage – though it’s likely that many of these individuals simply bought the game again after having their accounts banned.

Meanwhile, the latest update brings in a new anti-cheat system, which is currently voluntary to opt into. Doing so will help “refine” it for when it becomes mandatory, according to the developers. That patch also introduces a ranked system, region locking, and brings back map selection, though as Alice describes, it’s still a little messy. Only time will tell if it'll help to curtail the ongoing cheating issues.