The long-promised option to choose which map you play on in Playerunknown's Battlegrounds is "almost complete", developers PUBG Corp said today, though we will need to wait a little longer. If you fancy skipping one map or playing a particular one, you'll have that option. The devs had expressed concerns that adding map select might increase matchmaking times an unpleasant amount but, after analysing data from tens of millions of matches, seem confident that it shouldn't cause problems. They shared a look at the work-in-progress option and yup, it looks simple enough.

Map selection has been one of the top requests since Plunkbat's second map, Miramar, was added. While Miramar has improved with updates and renovations, at first its pace and play was too different in unpleasant ways - and I'd still often rather play Erangel. Some players even resorted to deleting one map's files as a canny trick to skip it.

The official map select option will be a little pop-up menu in the same spot as other matchmaking options. With a thumbnail for each map (in case you forget the name), you'll simply need to select and deselect the maps you do and don't want to play. If you have several maps selected, the game will pick one for you. 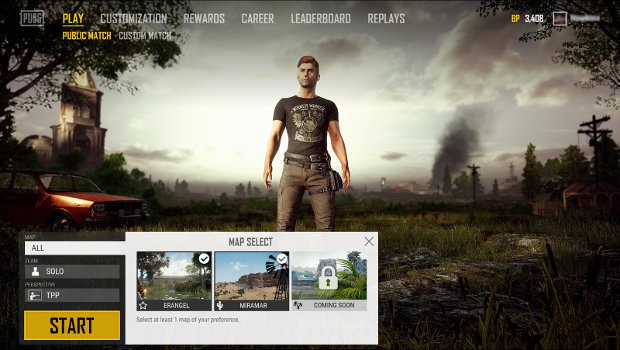 PUBG Corp explain that the possibility of increasing wait times was "the most troubling issue" as they considered adding map selection, but for now they don't think it'll cause problems.

"We analyzed tens of millions of matches and sorted the data by server, mode, and time to make sure map selection wouldn't break the game for anyone," they said. "We wanted to make sure that we could create a solution that worked for every region's players, even the ones with a naturally low server population."

The game may only have two maps right now, but the small 4x4km third map is in closed testing and another 8x8km map is due to follow. With that in mind, PUBG Corp say they'll keep an eye on the effects of map selection, "since it could become problematic as new maps continue to be added."

It's not ready just yet, mind.

"Work on the feature is almost complete," they say, "and we plan to release it soon after implementing it on the test server."

I wish they'd use this opportunity to bring back the fog and rain variants of Erangel. I know they were less popular for playstyle and performance reasons but ah, I myself really enjoyed the variety of seeing or hearing less. Or perhaps they consider a variant which borrows the ever-changing weather system from the third map, Codename: Savage. I miss the weather.

For a view on the broader state of the game, Rich McCormick last night looked at it in his Update Night column.