Update: This post originally said both new crates require paid keys to open. In fact, only one of them does. I muffed it. Apologies.

A key tone-setting moment in the stag & hen weekend experience of Playerunknown's Battlegrounds is, when you're flagging, slamming an energy drink so you can get back amongst it. It's important the drink is a Red Bull knock-off, 'Hot Bull', because it makes clear we've spent the weekend eating and drinking whatever looks familiar in kebab and corner shops. Sadly, Hot Bull's days are numbered, as the next patch will replace the can with some ghastly weird 'PUBG' brand drink. What does 'PUBG' even mean? Oh, and two new cosmetic loot crates--one of which costs real money to open--are coming but their clothes are mostly ugly.

Let's smash through some 'important' bits before we get down to what really matters. The upcoming patch is now live on the test servers, so install the test client if you want to play. You'll get some Plunkbucks and keys to open a few new crates too. Some would say these are the two most notable parts of the patch notes:

Or they believe it's important that the devs say they plan to make "small changes" to the starting islands to further improve early-game performance. Or they're excited about the option to report suspected cheaters while watching replays. Those people are wrong. The most important part of the patch is replacing the can of Hot Bull with this:

Is that an iconicised Brendan 'Playerunknown' Greene there on the can? Whoever he is, this can is too far from the Red Bull knock-off mould. While it uses the red/silver/blue palette of the genre and the hexes are a nice touch, it looks like a beer. Focusing on a mascot--and such an unusual one!--also means the manufacturers are trying to build a brand of their own. This is beyond the range of designs that a bleary-eyed lad would reach for to shake off their hangover after a night of clubbing and 100-player murder.

I suppose this might be a trademark concern, the old can being just a little too close for Red Bull's comfort, but surely Plunkbat has made enough money to buy out Red Bull - or at least one of their surviving generic competitors.

Looking around the datanet, I am appalled to discover that the hot discourse is more focused on Plunkbat's new loot crates. Baffling. The new Biker and Desperado crates are both bought with the Plunkbucks we earn while playing, but the Desperado will then require a key to open it. Keys cost $2.50 when the developers ineptly tested the waters with the Gamescom crates. Players have no way to pick which they will receive after handing over Plunkbucks, instead having a 40% chance to get the Biker crate, 40% for the Desperado, then 10% for each of the old Wanderer and Survivor crates.

I wish both crates were 'free'. So much of Plunkbat's clothing is hideous and there's so little in total that I'm sitting on thousands of saved-up Plunkbucks. A few items in the new crates look nice but, of course, many others are xtreme edgy '90s nonsense slathered in spikes, straps, and buckles. Here, look at the thumbnails for the contents of the Desperado and Biker crates. What is with this game and its awful fashion.

Here's a random snap of some folks wearing new clothes on the test server, including drop-crotch trousers with one oversized knee pad, spiked leather gloves with extra straps, a polka dot t-shirt which could be nice with a better neckline and if the dots didn't scale up to fit the chest, textured acrylic turtleneck vests in black and terra cotta, and a checked blazer which would need a whole different wardrobe to support it. 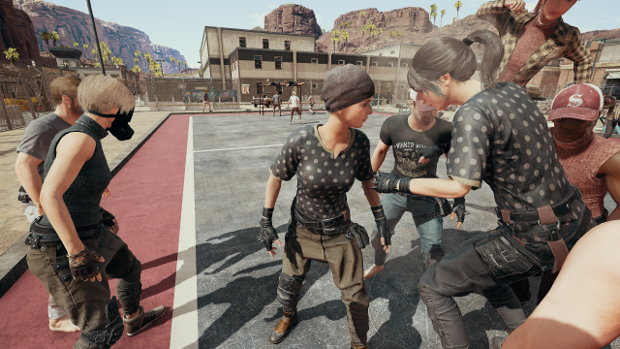 I'm awfully fond of this game but mate, come on.

As for paid crates in a game that's still wonky and has poor customisation options? It's unsurprising, I suppose. That's big modern games for you. I'm not too upset because it's all cosmetic, most of the clothes are ugly anyway, and I can't imagine this work takes meaningful resources away from the teams improving performance and stability. But it's still a shame.

At least the devs have shared the odds of getting each item in crates so we can all see buying 'em is a waste of money because you'll likely receive trash.