The problem of high-ping players disrupting Playerunknown's Battlegrounds matches with their jerky movement and wonky hit detection hopefully won't continue for much longer, as developers PUBG Corp have announced plans to start testing a solution this week. Having previously considered the approach of a maximum ping limit, they now say they're going to divide matchmaking pools by ping, putting low-ping players together and placing HPBs in a screeching dialup pen. The devs don't know when this will properly launch in the main game for everyone, but they plan to start testing in some regions sometime this week.

They're also starting to mutter about future plans for the game, including a new map.

"The team is expecting to improve the overall play experience by splitting the matching pool rather than restricting connection depending on ping," today's dev blog post says. They hope the ping pens "will get even better results" than their mooted ping cap.

"Preparations are underway to test this method in some regions, with first trials planned to start this week," they say. "Specific dates will be shared when ready."

Ping variance is a mushy problem. It's obvious when someone is rubberbanding wildly, and I've suffered a few deaths to jerky people I simply couldn't hit, but the subtler manifestations are hard to quantify. I can never know for certain if shots I miss and hits I suffer are being bent by ping problems (I am willing to accept I can miss), which creates a broad dissatisfaction and suspicion when I feel I'm hard-done-by. I don't enjoy that sort of grumbling, and dislike playing games which cause it to rise in me.

What else is brewing? Well, this week's upcoming patch is now on the test servers, bringing yet more minor changes intended to improve client and server performance. Going by patches so far, part of Plunkbat's performance problem is zillions of small problems adding up. One such minor change this week is replacing some destructible fences on the Miramar map with indestructible fences or walls. Look carefully when you're driving these next few days, yeah?

A far bigger change is closing the drop plane's door, so we don't see everyone sitting inside during that initial flyover. "This is to improve the early game client and server performance," the devs say. So we can still tell how many players are left in the plane, it has a new UI doodad in the bottom-left corner tracking empty seats. It looks like this: 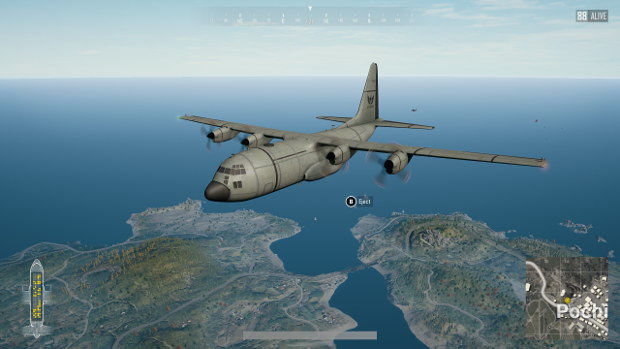 I will miss peering through the door at other players, just like I was already missing how Plunkbat used to let me see everyone in the plane from a first-person view. And like dividing lobbies into multiple zones, I wouldn't think about or expect this if it hadn't been in the game at all, but I will miss the absence. Still, if it helps performance, so go on. The game is less charming for it but maybe less wonky, and less wonky is good.

Barring surprise problems, I'd expect the update to hit the main servers in a day or two.

Looking deeper into the future, PUBG Corp say that in March they will lay out their plans for the rest of the first half of 2018. "We do have a lot of exciting things that we want to share with you, including new content to provide more extensive battle royale experiences as well as improvements and modifications to create a deeper and more realistic gameplay," they say. All they'll firmly state for now is that plans include a new map. What setting would you like to see, gang?