If you click on a link and make a purchase we may receive a small commission. Read our editorial policy.
This is Playstyle Royale, where Matt heads into a battle royale game and is tasked with sticking to his own strange rules of engagement. This time, dropping into Call Of Duty: Warzone and adopting a helicopter.

Today on Playstyle Royale, the series where I head into a battle royale game and try to win my chicken dinner while adhering to arbitrary rules, I'm joined by esteemed guest Nate Crowley. We're going to drop into Call Of Duty: Warzone, make a beeline for a helicopter, and then never leave it. We'll be stuck with whatever gear we've scrounged at the point when we climb inside, but I've little doubt that we will prove victorious regardless. I am very good at helicopters.

Nate can't actually be here for this write-up, because he is very selfishly on holiday. Don't worry, I'll do the voices. As usual, we've got five attempts.

We're off! I'm so eager to embrace the skies that I wind up plunging directly into the whirring blades of a helicopter, which someone has already managed to start spinning up beneath me. Nate fares a little better, actually managing to make contact with the ground - for about two seconds, before the helicopter pilot pops out and shoots him. That's OK, because we both wake up in the Gulag, where killed players get to earn their freedom by fighting in prison duels. 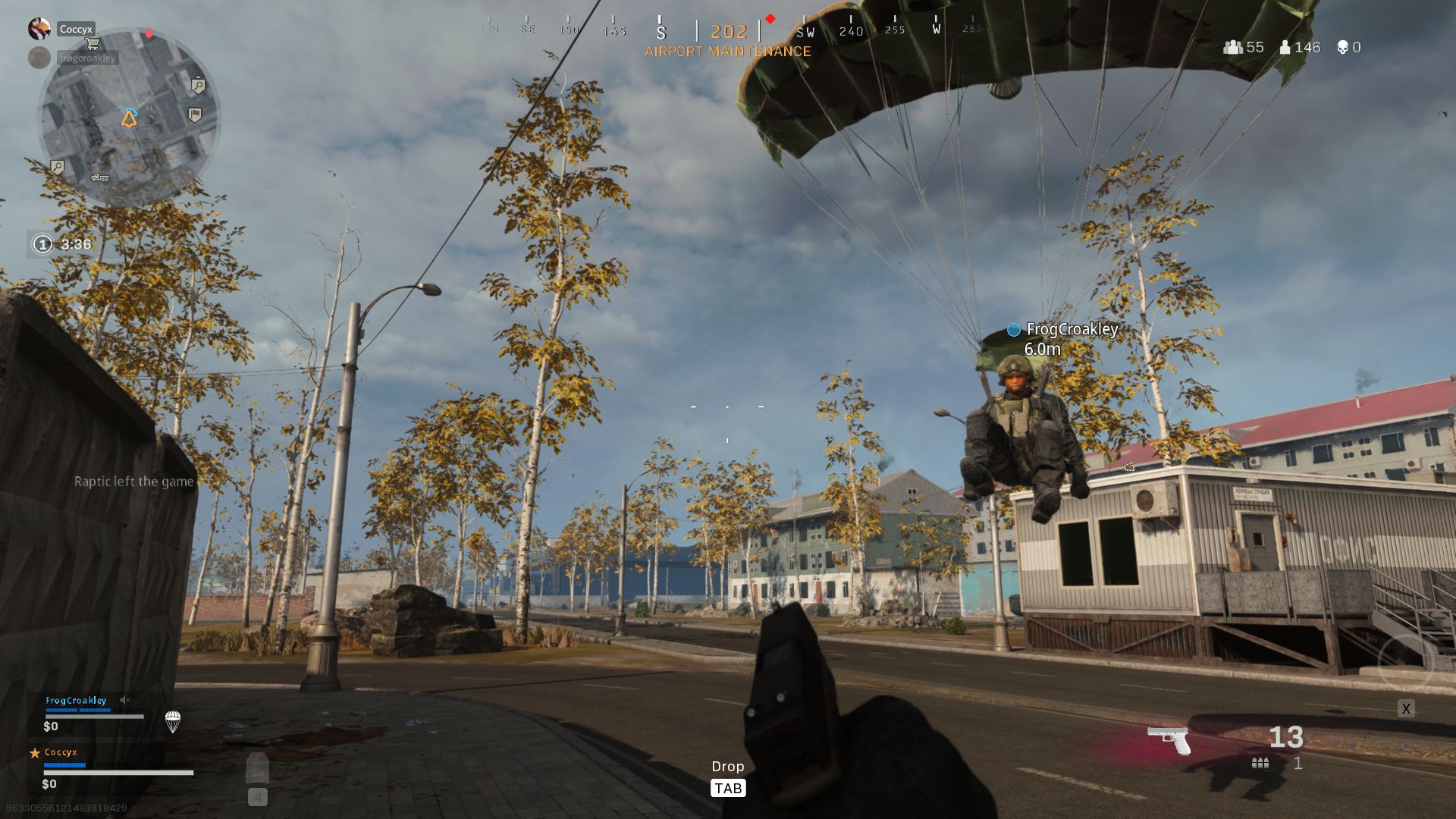 Attempt number two is equally lacklustre. The thing about Warzone's helicopters is that they're clearly labelled on the map, which means you don't have to spend ages traipsing about looking for them. That means nobody else does either, though, and by the time me and Nate land at the one I've highlighted, some jerk is already flying away in it. I shoot him, just to make a point. Then some other chopper chasers shoot us, just to make us dead. 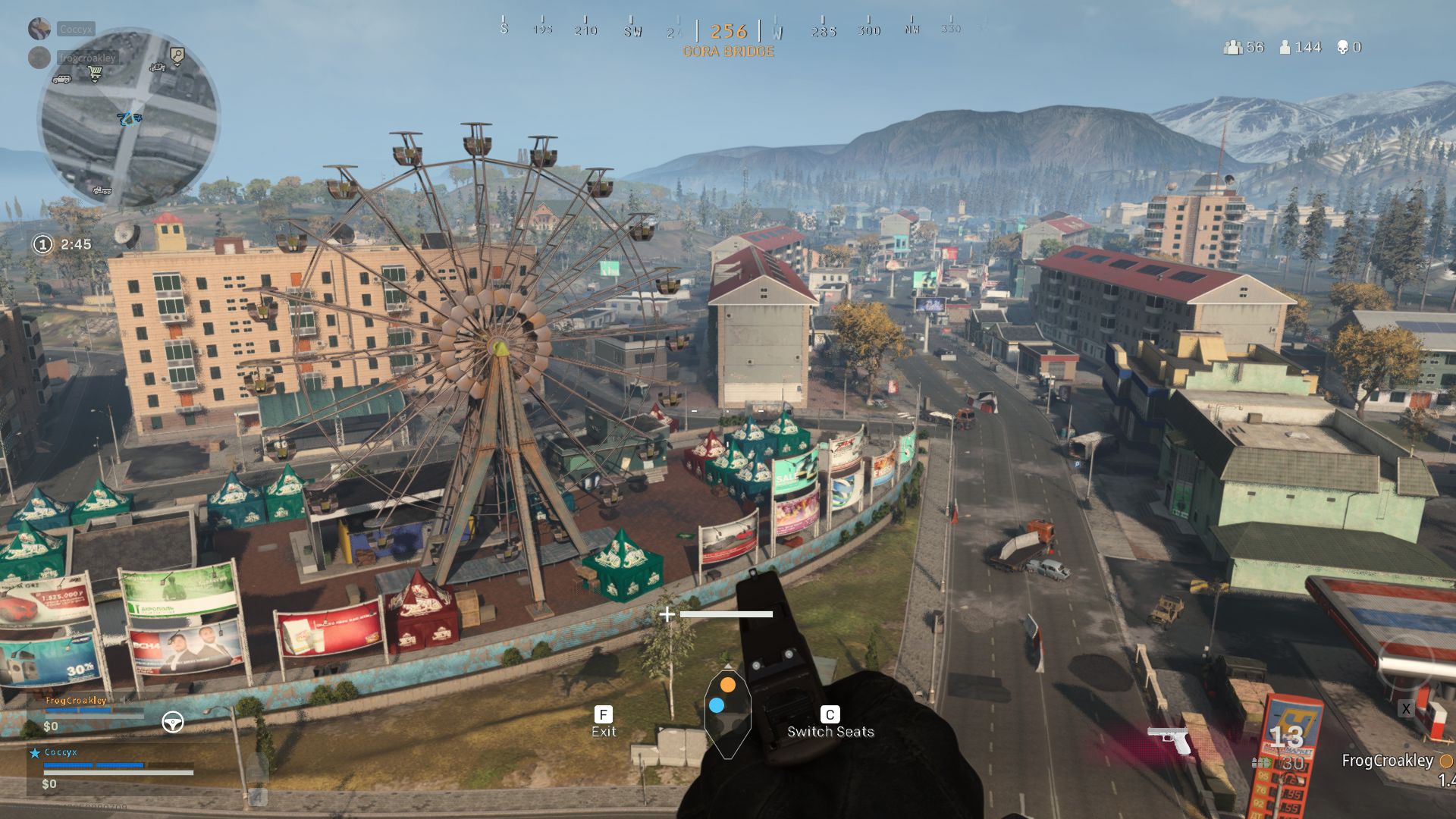 For our third attempt, I steer us well clear of the crowds. Our patience is rewarded with an uncontested helicopter, and before we know it (and before we've had a chance to find any weapons better than out starting pistols) we are airborne.

Nate is in the pilot seat. We fly as high as we possibly can, and just chill for a bit. Verdansk spills out beneath us, and we listen to the distant echoes of gunfights that are no longer our concern. We don't have to worry about fuel, because we're in a magical warzone where fuel doesn't exist. We do have to worry about the other people in helicopters, who do exist, and do also have much bigger guns. 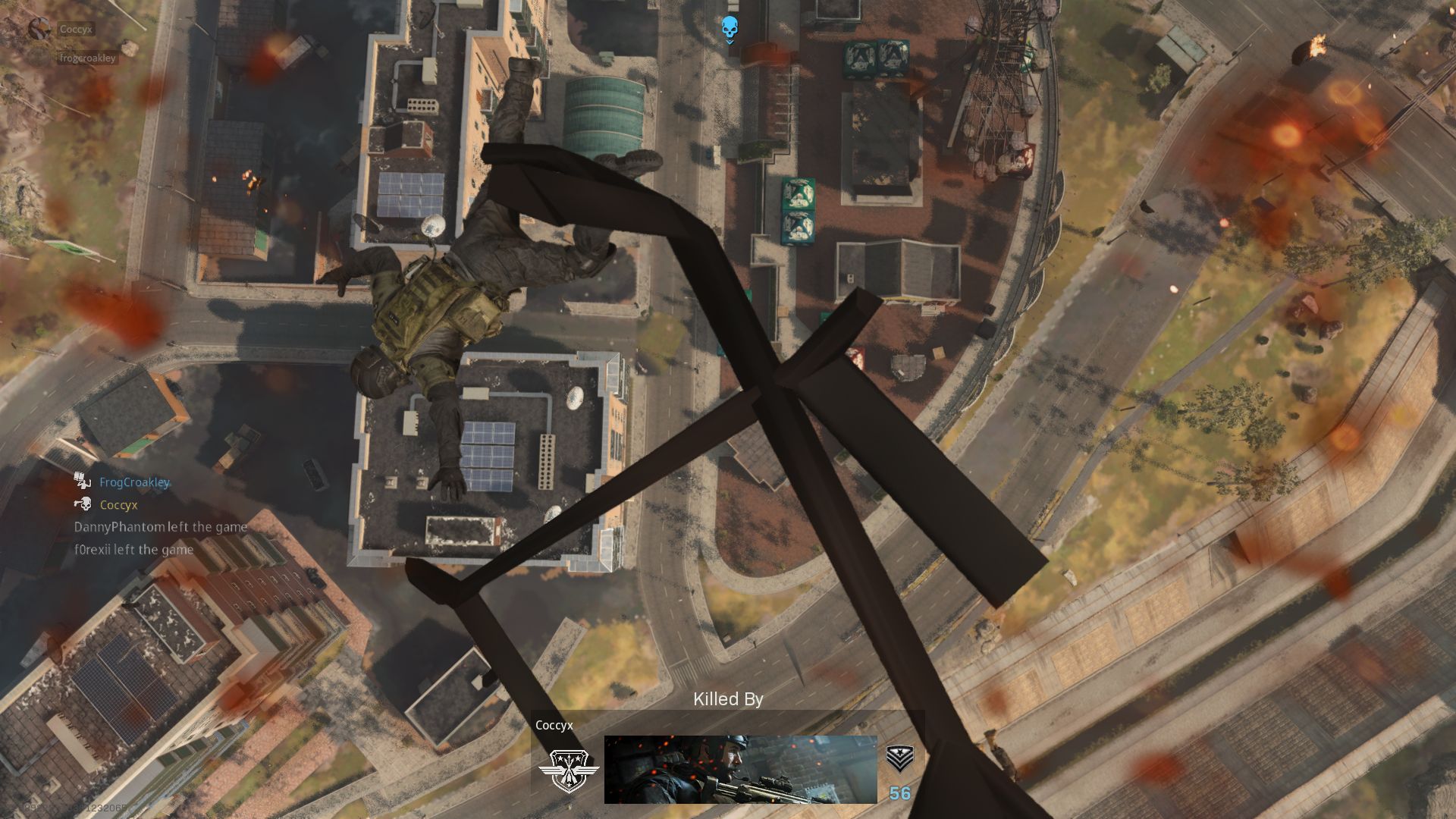 One of them wants to tussle. We buzz past each other, with me firing off piddly little pistol shots in response to the roaring of their LMGs. Nate has grander ideas, and crashes us into their chassis. I grudgingly admit it was the right call, as we fall from the sky in a drizzle of shrapnel and blood. 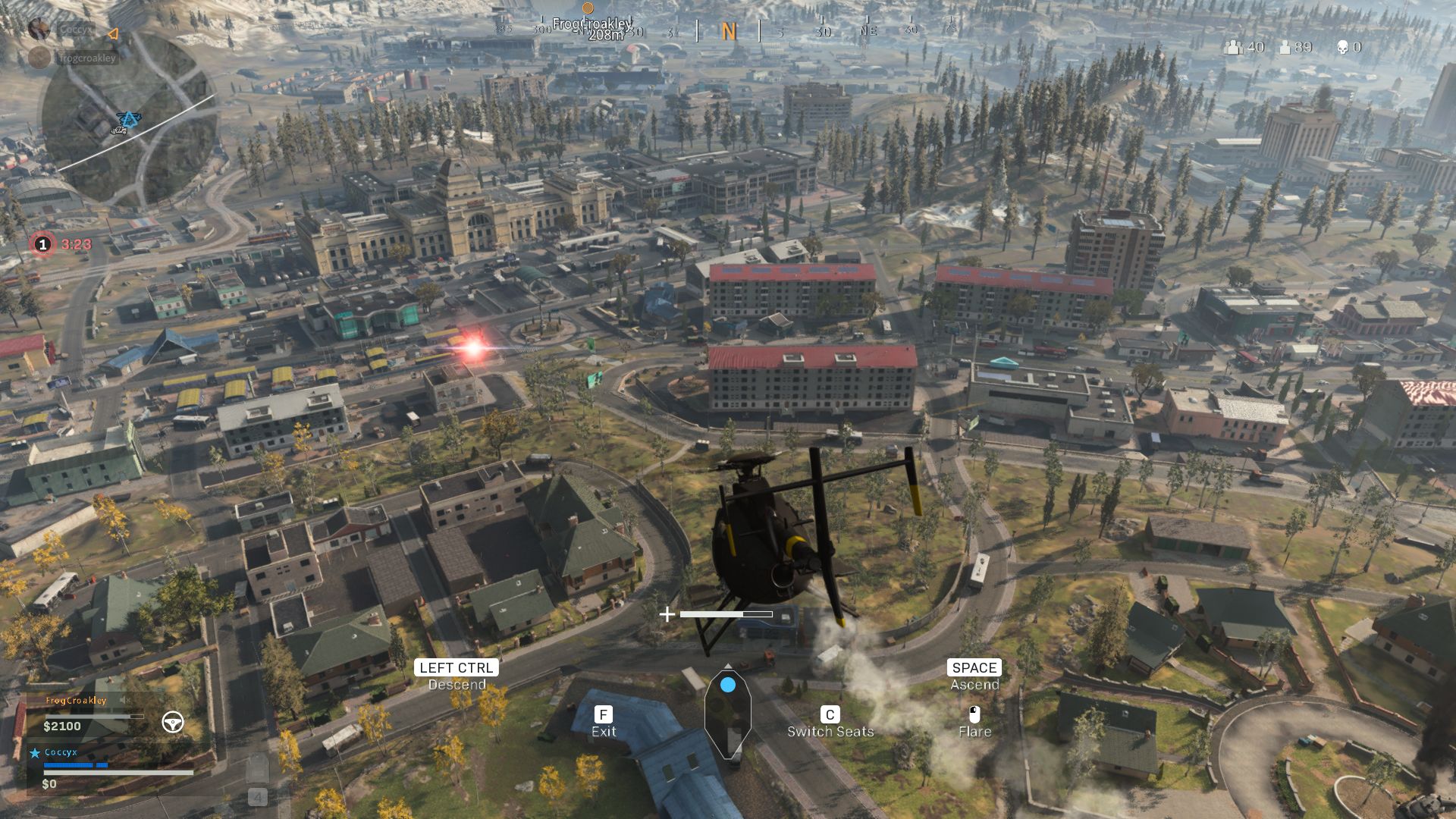 In round four, we snag another uncontested helicopter. Nate flies again, while I take pot shots at floor people with a sniper rifle. I come to the uncomfortable realisation that there's a recurrent theme in my roleplaying, betraying my secret longing to be an untouchable sky bastard. Fortunately, I'm distracted by running out of ammo.

There are more guns scattered about various roofs, but my bum is fused to the helicopter seat. After some deliberating, we eventually figure out that I can hook them up with my foot, without having to leave the chopper. Our reign of terror (although not of any actual killing) continues, until we are brought down by a heat-seeking rocket.

We both win our prison duels! 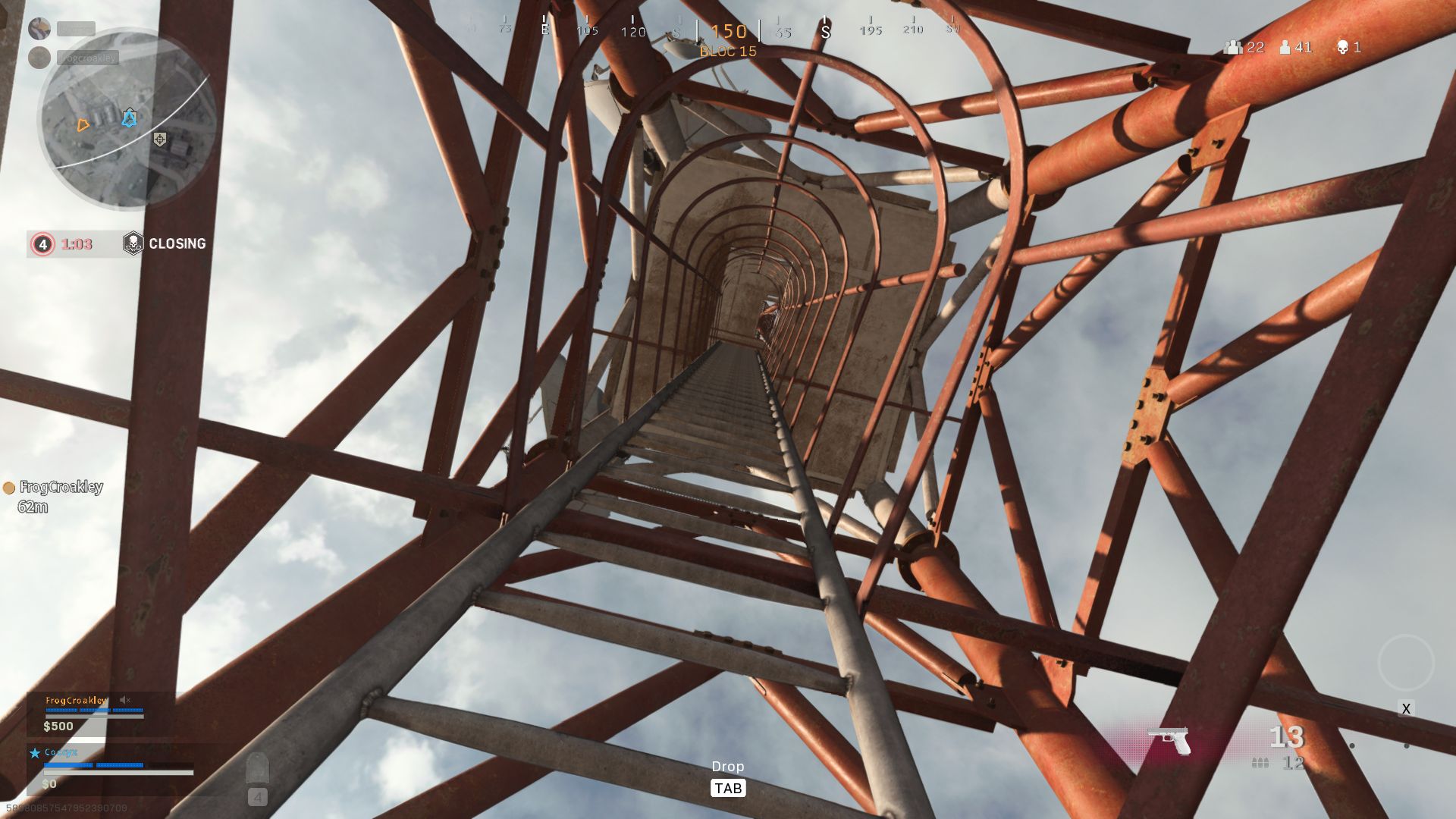 We return bereft of helicopters, though, so Nate dictates that we must pretend to be helicopters. This doesn't present him with much difficulty, as he is shot and killed by some people lurking in a warehouse. I take that as my cue to get off the roof of that warehouse, and to stop twirling around making whirring noises. My other cue is that I've seen a radio tower with a big ladder. It beckons to me.

I make it to the top without incident, then descend with incident aplenty. I tell Nate that I've spotted a man, and that I'm going to batman him. Like this.

My dreams of aerial assassination come crashing to the ground, and we load into our fifth and final round.

We hop into another isolated helicopter, with me at the wheel for once. Nate flagrantly disregards the rules and jumps onto a roof so he can loot it more thoroughly, and I'm forced to fly as close as I can to him while tutting vigorously. His impertinence nets him an LMG.

A couple of minutes later, his LMG nets him a kill. It's our first, non-prison based murder! I am very proud, even though I did most of the work by strafing around to give him a consistently good angle. 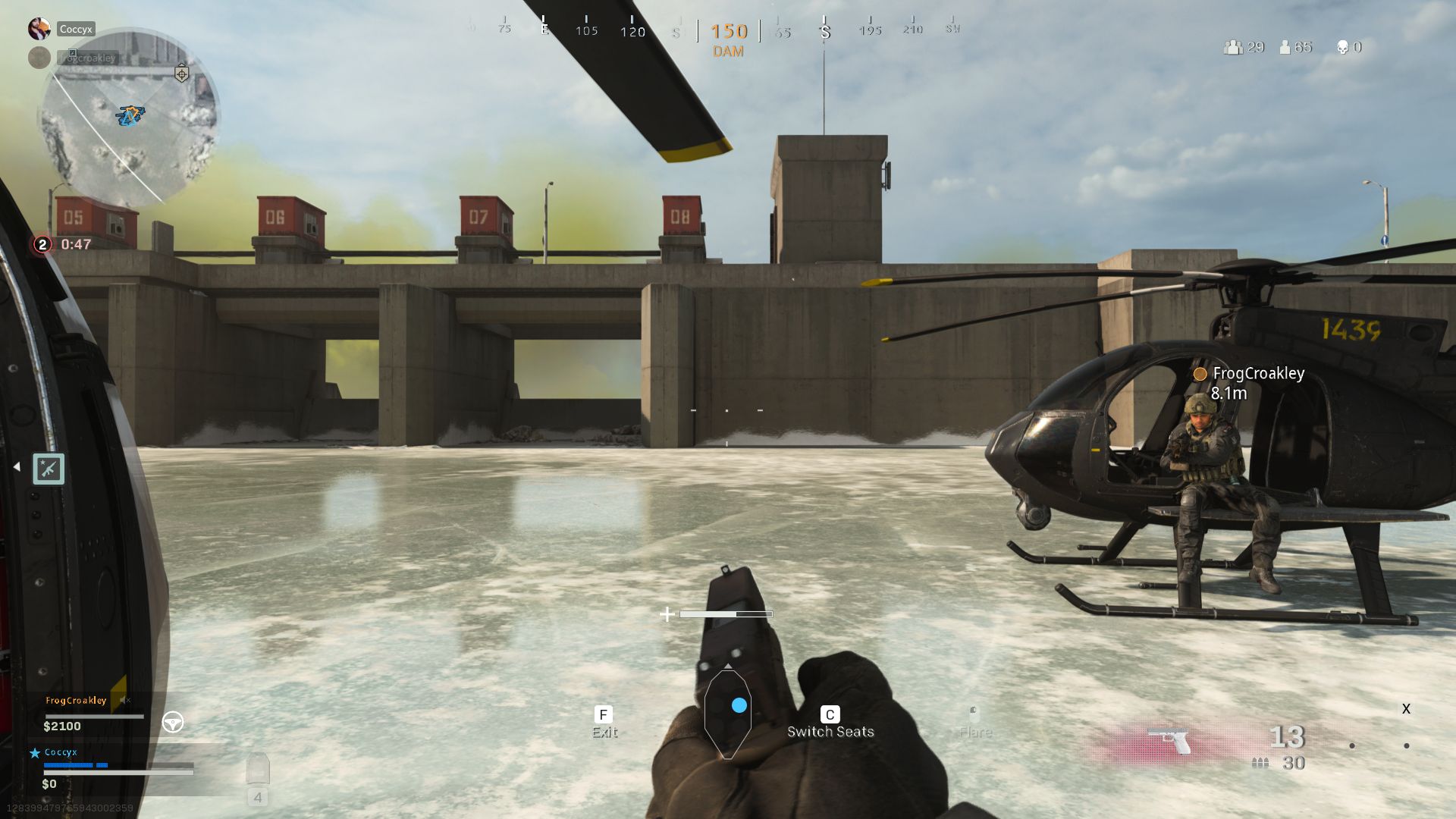 It's at this moment that we realise one helicopter is no longer enough to sate us. We spot another one, unused, then both take to the air like invulnerable wasps. We buzz around the map, unchallenged, revelling in our ascendancy. Ever since we killed someone Nate has been calling us the "Copterlorians", which gets a bit much, so we settle down for a nice picnic behind a dam.

It was to be our last meal. When the circle moves us on, I spot a man and attempt to take him out with my helicopter blades. This goes spectacularly, but not in a good way. Over the sound of tearing metal, I hear Nate complain of a fast-approaching rocket.