The Orange Box turned 10 years old this year, and by extension Portal celebrated its anniversary too. Sitting alongside continuations of well-loved games, the short puzzle adventure could have been quickly forgotten. Tacked on to bulk up the box. It was, however, a surprise hit, winning over players with its smart spatial puzzles and writing that fans continue to quote. And while I can list lines off with the best of them (don’t even get me started on that cake), this classic’s hold on my heart comes from a person who never speaks one.

It took me an embarrassingly long time to catch on to the game’s mechanics at first. As I exited the first room, I wondered who was that lady disappearing into the portal across from me, only to realize a second later that I controlled her. Like many players, as soon as I snagged a dual-portal firing gun, I contorted myself to try and catch a view of the woman holding it. 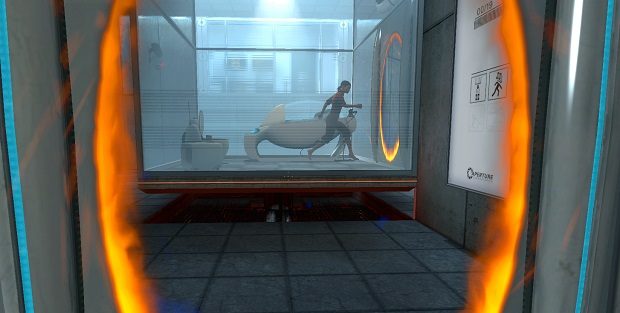 I’ll never forget the first time I saw her.

She looked exhausted. There were bags under her eyes and a haggard expression that broadcast how completely and utterly done she was with all this laboratory crap. She wore a shapeless jumpsuit badly in need of a wash, spotted with stains that contrasted sharply against the sterile walls of the facility. And atop her head, well, that was the best part:

“She has bedhead!” I squealed.

Frizzy, scraggly, beautiful strands of hair jutting out from a ponytail I recognized in an instant – one made as an afterthought of necessity, gathered low on the back of the head, no doubt while on the run.

I was stunned in the best of ways. Here I was, playing as a female protagonist (her name only revealed in the credits as Chell) who had been shoved away for who knows how long, wrenched out of sleep and thrown in a facility to parkour through “tests” for a malicious AI, and she actually looked the part!

Don’t get me wrong, I almost always love it when games have female protagonists, and being strong and looking put together are by no means mutually exclusive. But it can get tiring when these characters, by virtue of being women, always seem to wear down differently than their male counterparts. Their hair and makeup remain flawless through blows that magically only rip away fabric around their cleavage, hips, or thighs. When hit, some let out pained sounds that would be more suitable for an adult film than a battle. And why does it seem like any girl with an ounce of strength ends up in a tank top at some point?

Not even Chell is immune; it’s her assemble of choice in Portal 2. The sequel also smooths out those lovely frizzy strands too, and someone (Wheatley, maybe?) snuck makeup onto her face that managed to stay in place perfectly through a 50,000-yearlong stasis.

Since 2007, we’ve seen a wider variety of female characters, some handling their pain unprettily like Chell, and I hope there’s many more to come. Badasses don’t have to be bombshells all the time; when you’ve been through hell, sometimes it’s ok to look it.