Premature Evaluation is the weekly column in which we explore the wilds of early access. This week, Fraser’s making his very own RTS faction in Petroglyph’s Forged Battalion.

The drones swoop in first, dropping gas bombs on top of unsuspecting mech pilots. The rest of the horde soon follow, announcing their arrival by launching toxic grenades that slowly corrode their victims, accompanied by the traditional wall of missiles. Anti-tank mechs tear into the defending artillery while buggies with rocket launchers strapped to them round up the stragglers. The base is torn down. These are my babies. 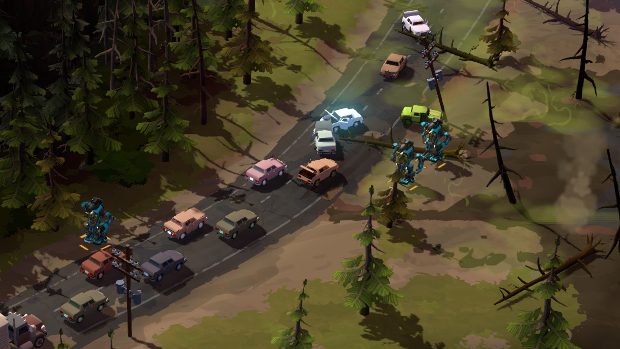 What if Command & Conquer: Red Alert 2 let you build Tesla tanks and Prism tanks in the same army? Or if Zero Hour let you slap nuclear shields on an Overlord tank? That’s Forged Battalion’s pitch: it’s Command & Conquer but with customisable factions and units you create yourself. It’s a peculiar hybrid of old and new, from a studio founded by C&C vets and responsible for Star Wars: Empire at War and Grey Goo.

It’s the future and global warming has inevitably made the world a crappy place to live. Desperate countries have been bamboozled by an Elon Musk-type bloke who -- shockingly -- turned out to be a villain. Now he’s well on his way to controlling the world, with only a scrappy band of rebels willing to stop him. 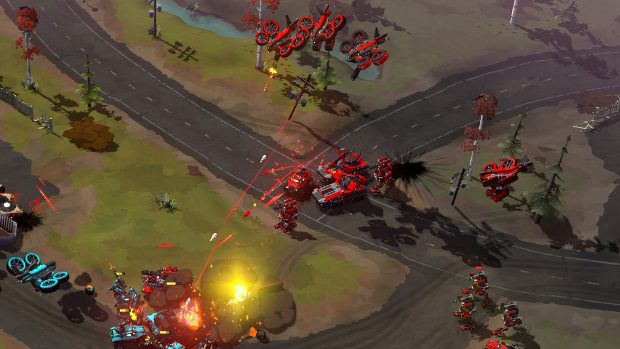 The setting is pretty slight right now, with a big exposition dump at the start and not much else, but it seems to be leaning more towards the vanilla seriousness of Generals rather than the kitchiness of Red Alert and the Tiberium series. Someone give an RTS the budget needed to get Tim Curry back. Like all of them, though, it’s really just an excuse to pit armies against each other as they fight over resources and protect their vulnerable bases.

The base building side is a race, with each team furiously trying to make use of every second -- smashing hotkeys and churning out units -- so they can go in for the kill. It’s all about rapidly trying to reach a critical mass before sending out a huge blob of tanks and infantry and air support. Get them inside the enemy base and it’s all blinding pyrotechnics and wanton destruction until only one army is left. 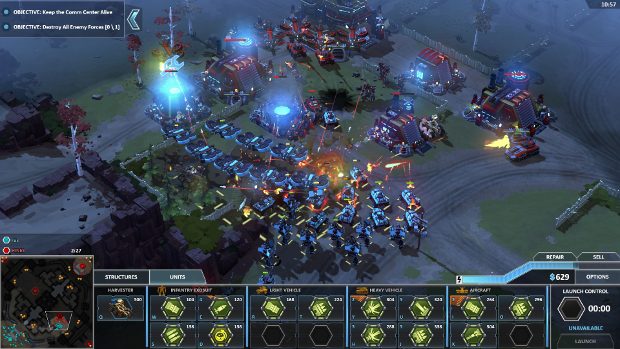 Getting to that point requires sticking to a simple build order that you’ll repeat ad nauseum. I don’t think build orders are particularly compelling problems to solve, but if you are going to make a build order RTS, then you’re probably going to want more than one of them. At the moment, Forged Battalion doesn’t really have enough structures to support more than a single approach. You plonk everything down in a pretty common sense order, and then chuck down a few turrets if you’re worried the enemy might reach you first. In five minutes you’ll have a fully functional base and access to most if not all of your units.

From there it’s just a matter of building more refineries and hitting up new resource nodes when the old ones become exhausted. Building duplicate factories can also speed up the production of units. These are the familiar fundamentals from Westwood’s classics, but they’re still a bit undercooked right now. This in combination with the predictable AI that tends to save up for one massive push leads a lot of simple and brisk matches. This wouldn’t ordinarily be appealing, but it does make them excellent test beds for experimenting with new armies. 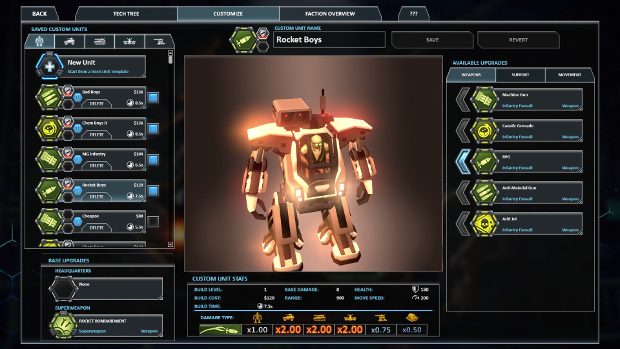 In my first attempt at the campaign’s introductory mission, my faction, Very Big Spiders (I wanted to intimidate my enemies), was a bit underwhelming. I had tanks and mechs and drones, sure, but all they had strapped to them were puny gatling guns. My opponent had flamethrowers and rocket launchers, which didn’t seem very sporting. Their weapons, unsurprisingly, proved to be pretty effective at kicking my arse.

But with that loss and a subsequent victory on a lower difficulty level, I’d gained points that I could spend on making my faction beefier, sneakier and weirder. After a couple of games, I had mechs that spewed toxic gunk at enemies, and after a couple of hours they were accompanied by drones that dropped gas bombs, mechs with toxic grenade launchers and rocket tanks. It’s especially cathartic to be able to go into a mission again, this time bristling with new weapons, and get some revenge instead of just relying on plain old wisdom and experience. 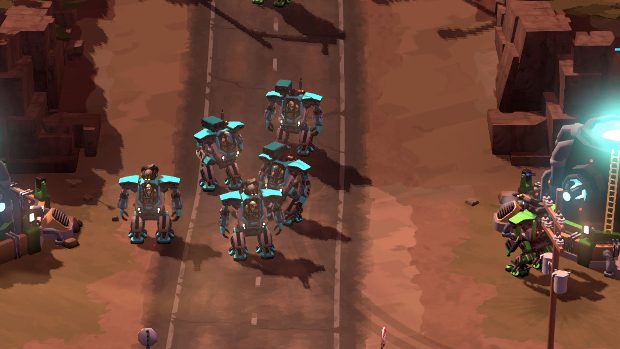 Every unit class has a weapon, support and locomotion module, so that’s four classes with three points of customisation each. Turrets also have weapon modules, and buildings can be enhanced with new tech as well, so there’s no dearth of stuff to tweak in the faction design screen. You can get points for victories and defeats in both campaign missions and skirmishes, so there are plenty of ways to unlock new tech, and the pace of the unlocks means that you can get your hands on new stuff with every couple of battles.

With all techs eventually accessible, the unit creation tool is a big toy box, but when it comes to putting together a loadout, cuts have to be made. You can only have four of each unit class, and it won’t be long before you’re forced to leave some of your units behind. You can keep churning out as many of those 16 units as your economy can support, though. And if you include your three turrets and your resource-collecting harvester, that’s 20 different types of units you can recruit. It’s hard to keep track of them, especially since the mods don’t change their appearance dramatically. 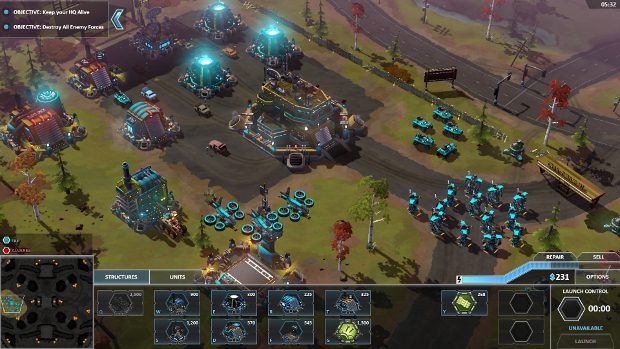 Specialisation is the way to go, with my preference being an army of Captain Planet villains. But, depending on what you’re facing, you might need more long-ranged units, and perhaps you’ll have better chances with heavily-armoured units rather than ones with regenerating health, especially if you create some units that can repair their pals. Objectives inform loadouts as well. And maps. If there’s a time limit and a lot of ground to cover, you might not want to weight down units with heavy weapons. If the ground’s muddy, switching out the wheels for treads would be a good call, too. Hazardous terrain isn’t just an obstacle that you have to live with or avoid, it’s something that can be overcome with tech.

When you start to consider the ridiculous number of module combinations, the three slots and 16 units doesn’t seem as big as it once did. It also makes it hard to prepare for random battles. There are just so many things that you might need to counter. In the campaign, where you can replay missions, you’re gearing your army towards fighting an enemy you’ve already faced, but you have no idea what you’re going to be matched up with online. But then you also get to enjoy the surprise of finding out you’re duking it out against someone who has given all of their units rocket launchers, or that your opponent has cloaked their base and is preparing a nasty ambush. According to Petroglyph, abilities aren’t better or worse than each other, they’re just different, but I’d argue that an invisible base is absolutely better than one that just out there in the open with a big target on its back. That’s the sort of experience that makes you want your own cloaks, spurring on another trip to the faction editor and another 30 minutes of tweaking. 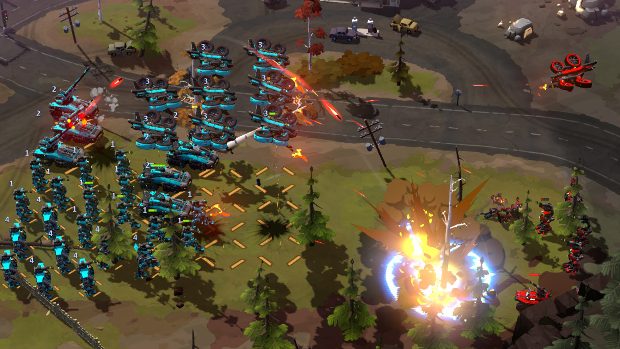 I’m into anything that shakes RTSs out of the rock, paper, scissors format and throws a bit of uncertainty into the mix. When Forged Battalion is at its messiest and most experimental, it’s at its best. I just hope some of that bleeds over to the extremely conservative base building. In the meantime, having things to do in the mid and late-game aside from churning out an endless supply of units wouldn’t go amiss either.