Premature Evaluation is the column in which we explore the wilds of early access. This week, Fraser’s been given the keys to Parkasaurus, the goofy dinosaur theme park sim.

The real tragedy at the centre of the Jurassic Park movies is that, no matter how many times they escape the park and kill their captors, the dinosaurs are never free of humans for very long. Whether it’s clueless holidaymakers, rescue parties or, inexplicably, more parks, humanity can’t help but interfere. Parkasaurus’ majestic beasties are likewise surrounded by scrawny bipeds, but there’s an important difference: these dinos get to wear lots of fetching hats.

After toiling away in the character-deficient Jurassic World Evolution, Parkasaurus is almost overwhelmingly charismatic. The park is a kaleidoscopic playground waiting to be filled with colourful, googly-eyed dino friends and their large wardrobe of headgear. From the tongue-in-cheek tutorial to the time-travelling expeditions that will help you make more dinosaurs, it never stops being playful, making sure you never spend too much time thinking about how there’s something inherently awful about bringing back extinct animals for experiments and entertainment. 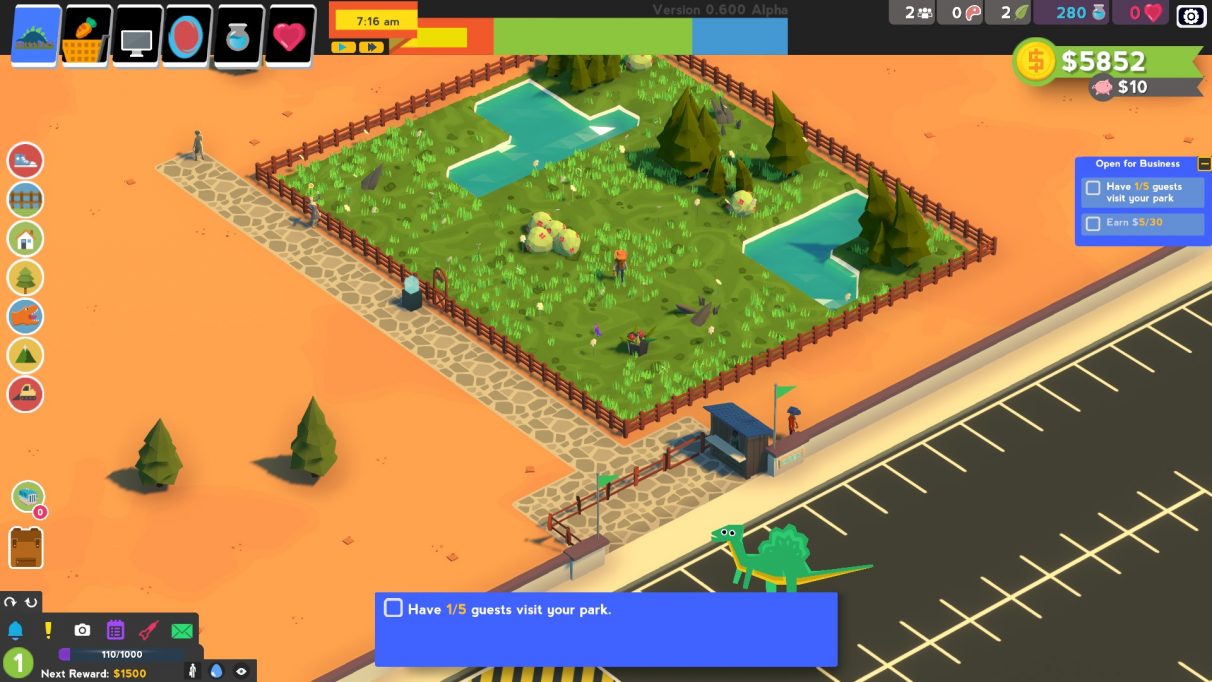 The broad strokes are familiar theme park management fare: build exhibits, hire staff, provide services and try to attract as many guests as possible, fattening up your bank balance in the process. And all the while, you’re expanding your park, researching new building and items, and making everything look very pretty with lots of props.

Dinosaurs are what draw the crowds, and designing their enclosures is the most involved part of the game. Dinosaurs are a needy bunch, thriving only when they live in the appropriate biome. If you want to make a Triceratops exhibit, for instance, you’ll need to create a miniature rainforest for them to hang out in. You can’t just conjure a rainforest out of thin air, however. Three basic biomes can be created immediately, but to create others, you need to tweak the enclosure. Different biomes can be created by changing how rugged the terrain is, or how much water it contains, and each comes with its own biodiversity requirements, necessitating the planting of trees and bushes, as well as scattering some rocks. 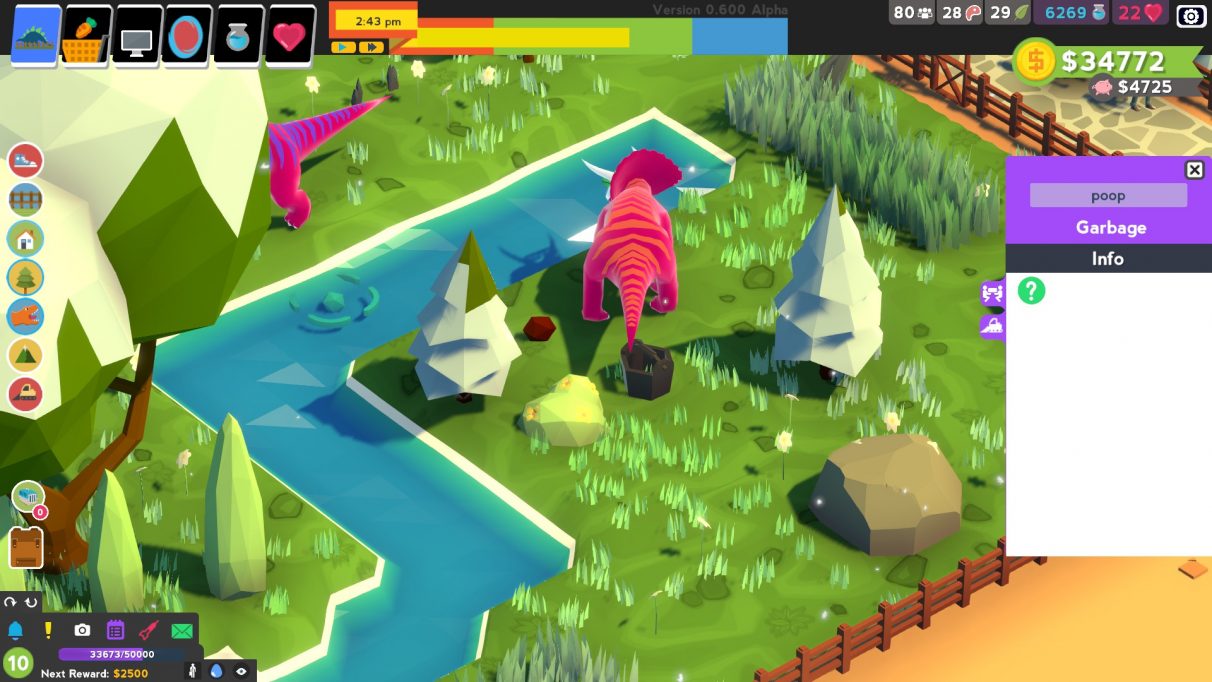 The simple terraforming tools are surprisingly versatile, and you can make some really eye-catching exhibits with very little fuss. The feedback the UI provides is particularly helpful, revealing the impact of every incremental change on a chart, while clearly showing how to reach the important biodiversity targets. Making unique, elaborate enclosures isn’t a requirement, and as soon as you hit the threshold where it turns into the biome you want, you can stop, but doing that would be like admitting that you don’t really care about your dinosaur buddies, and surely that’s not true.

Some enclosures require a bit of extra work, too. When I built a new home for my first Oviraptor, I made it pretty small. They’re only wee, I thought. And technically it was the perfect size for the little dinosaur, but I hadn’t taken into account how rugged I had to make it. There was barely any room for the little critter to move, surrounded as it was by craggy, inhospitable terrain. It couldn’t even reach the feeder, so he started to starve. The enclosure needed to be bigger, and I needed to consider how my dinosaur would move around it, fashioning paths between the rocky outcrops. 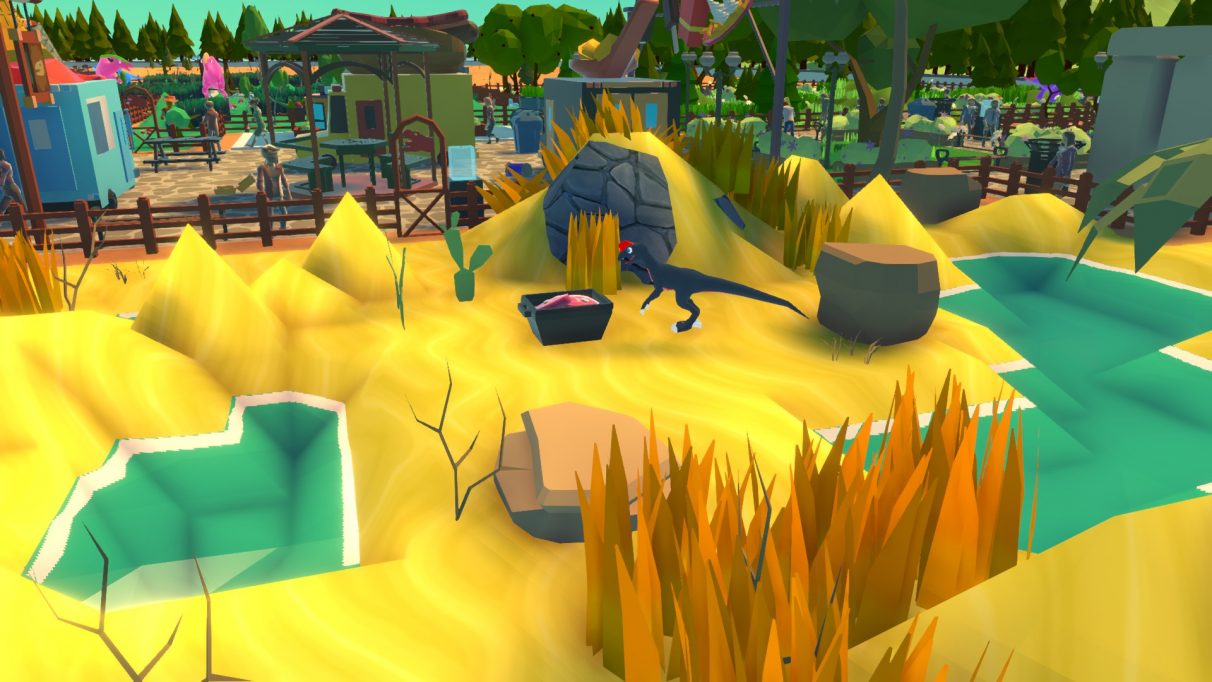 Dinos also have specific needs when it comes to their diet, the company they keep and how much privacy they require; this all feeds into how healthy and happy they are. Fail to take care of them, and they might die, leading to many very sad park guests, or escape. You’re able to make sure most of these things are taken care off before they even hatch from their egg, though I did have to deal with a Stegosaurus jailbreak early on. The wee dino was getting stressed out because the enclosure was surrounded on all sides by a path full of gawking guests, so it wasn’t able to get some much needed alone time. It made a break for it. Thankfully, I was able to knock it out, put it back in the enclosure and demolish a path before too much damage had been done. Only one fatality! And it was an adorable fatality, in fairness. I mean, just look at the baby Stegosaurus running off with his food. 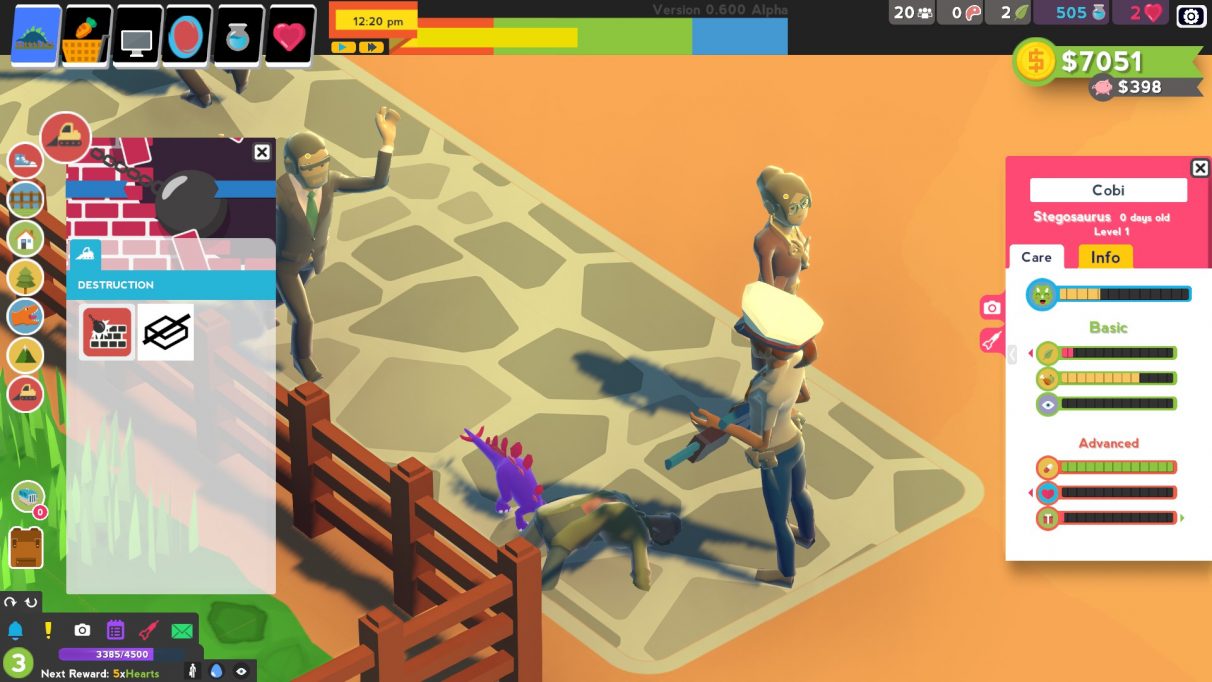 Once your new dinosaurs are all settled in, though, it’s easy to forget about them. Sure, maybe you’ll return to put some shades on one of them, or give your least-favourite dinosaur a fedora, but as cute as they are, the denizens of Parksaurus don’t really do much, aside from aimlessly wandering around. You still need to keep them fed, but managing them isn’t something you do continually over the course of the game.

Instead, Parksaurus encourages you to move on and building newer, more ambitious exhibits as you unlock additional dinosaurs and more things to put into their enclosures. If you do go back to the first dinosaurs you hatched, it will probably be to expand or upgrade their homes so they can fit more dino lodgers and add to the prestige of the park, not because you have to take care of any problems. This seems to be very much par for the course - there’s almost no adversity at all. Rather than looking over your shoulder, you can get on with starting a new project. 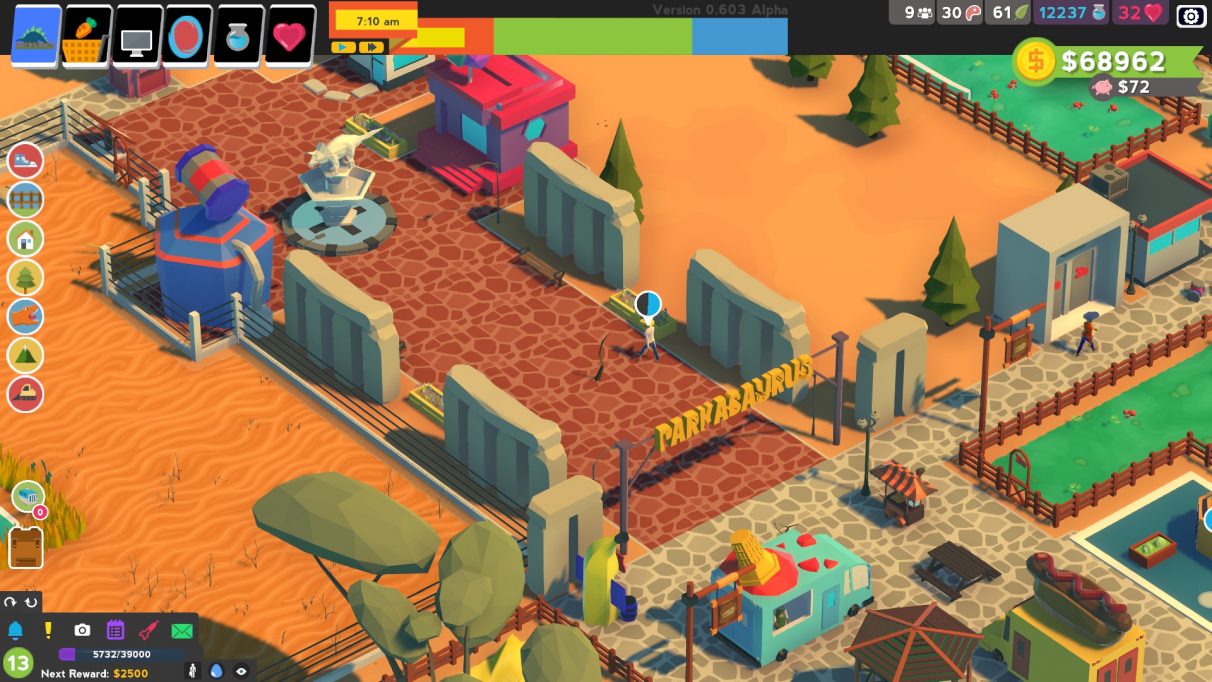 I’m in two minds about this. I appreciate the relaxing tone that it sets, and I definitely had my fill of chasing escaping dinosaurs in Jurassic World Evolution, but the total absence of friction feels at odds with the business management side of things. There’s so much fine-tuning that you can do, from staff training to changing the price of soda, but you can ignore all of it and be no worse off. Fair play, a theme park that has actual dinosaurs is bound to make a killing, but I’d also quite like to feel as if my park was profitable because I’d made good calls, not just because dinosaurs are the raddest.

The solution isn’t necessarily to throw in disasters and crises; just reducing how much guests spend would do wonders, without killing off the breeziness. Parkasaurus has the potential for plenty of little conundrums, and it already has all the tools required to solve them.

Science points are another resource that gets flung at you in copious amounts, unlocking new shops, services and objects to beautify your park. It’s accompanied by a second progression system: hearts. It’s by spending hearts that are doled out in small amounts at the end of each day that you can unlock new dinosaurs and stuff to cram inside their enclosures. The disparity between how quickly you get science and hearts means that you’ll have unlocked the entire tech tree before you even get halfway through the heart tree. 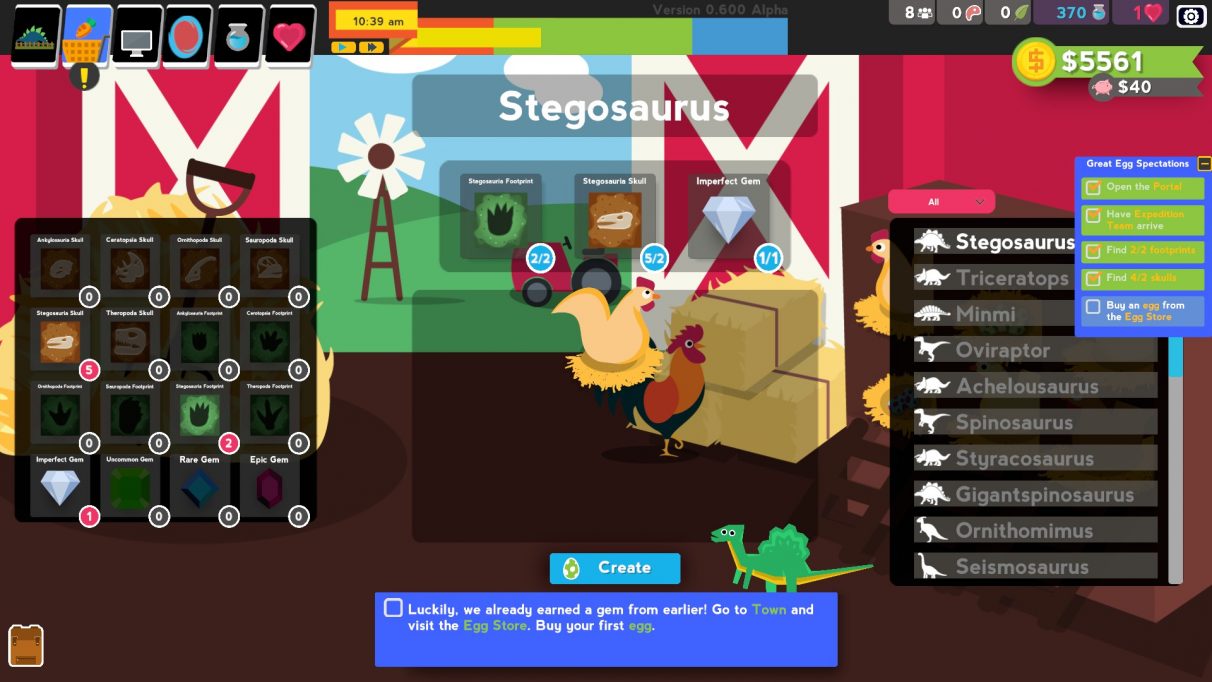 Once you’ve unlocked a dinosaur, you still need to do a bit of work to get one for your park, including a trip back in time. Using a portal, an archaeological expedition can be sent back in time to dig up dino bones (which seems like something that could probably do while staying in the present) via a mini-game that becomes easier the more scientists you have. Fossils and footprints can then be exchanged for dinosaurs in the egg shop, as long as you also have some magical gems. It’s all very scientific.

I quickly lost myself in the cycle of hunting for new fossils, creating dinosaur buddies and customising my exhibits. Despite the lack of management wrinkles, there’s was always another dinosaur or tech milestone driving me forward. I spent nearly an hour just tweaking a tiny food court. I wasn’t really concerned about efficiency or profit, just how the park fitted together, and how pretty it looked. Aside from the dinosaurs, Parkasaurus has a lot more in common with Planet Coaster than Jurassic World Evolution. 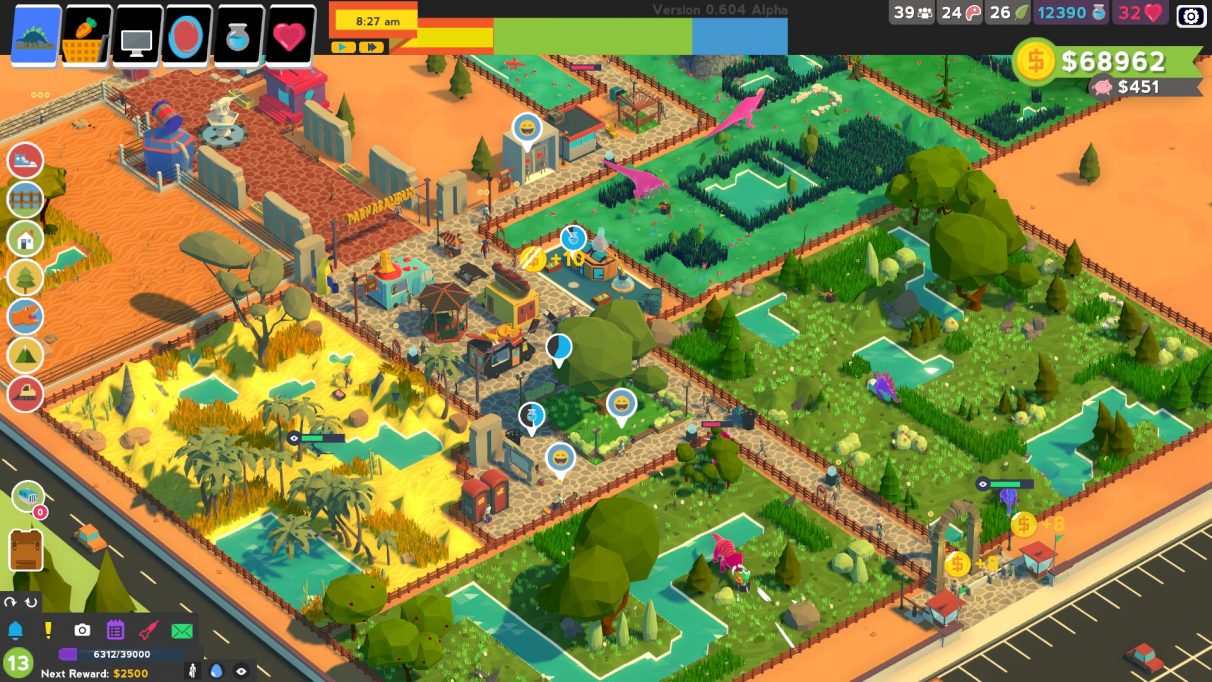 That cycle, however, is frequently interrupted by the end of the day. The park closes every night, forcing you to stop whatever you’re doing and stare at a summary before loading up the next day. It’s a huge pain in the arse. All the information it provides can be found elsewhere, and since there’s no pause button, you can’t hold it off while you put the finishing touches to your fancy Velociraptor exhibit. It needs to go in the bin.

As a creative sandbox, Parkasaurus is already looking very promising, but it definitely has the legs to be a solid management game as well, there just needs to be an actual reason to put on your management hat first. If you’ve been keeping an eye open for a new theme park to manage, this one should definitely be on your radar. In the meantime, here is a Triceratops wearing shades. 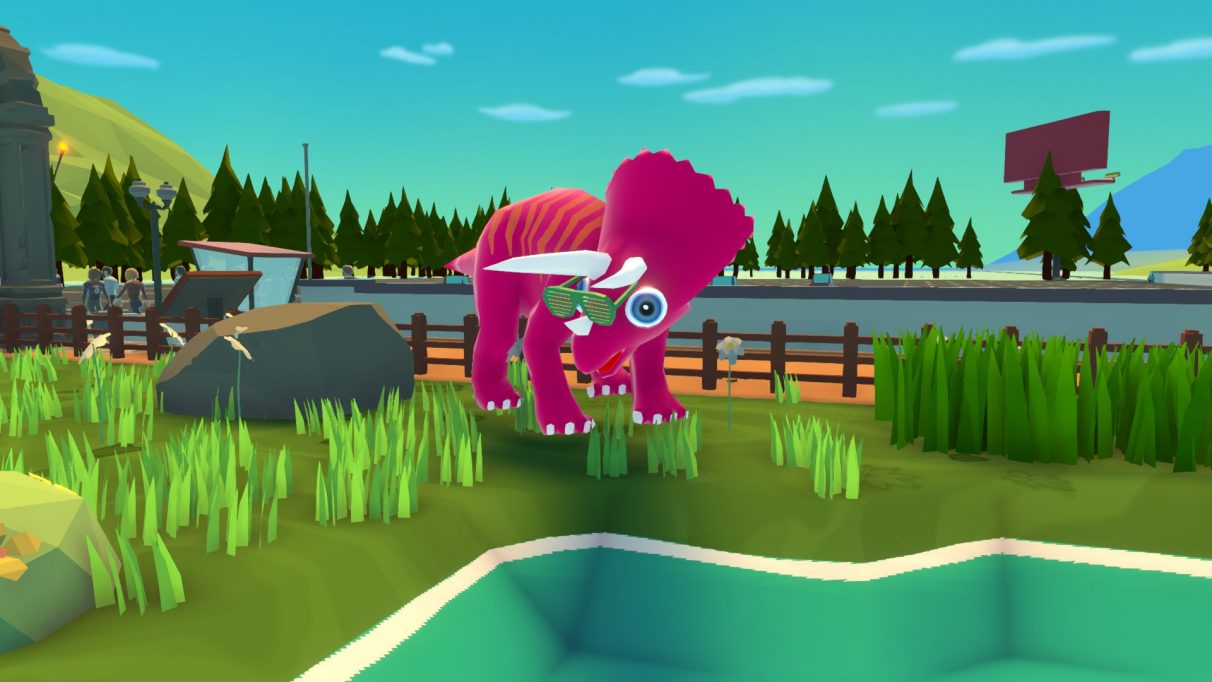