If you click on a link and make a purchase we may receive a small commission. Read our editorial policy.
Premature Evaluation is the weekly column in which Steve Hogarty explores the wilds of early access. This week, he's hooked on a feeling in Russian Fishing 4.

Back in the before times, before the fires and the disease came, you could feed bread to ducks without being cancelled by the bird police. Just grab a sliced pan of wholewheat Warburtons and hurl it into a lake, then watch as every duck, swan and anaemic-looking goose in the postcode descended upon it in a feathery gale, quacking and honking and feasting in a sordid maelstrom of avian debauchery. Now, say the bird police, it is only appropriate to feed fresh organic frozen peas to the ducks, otherwise their insides will turn to slime and their beaks will go soft and drop off.

Today’s Russian Fishing 4 patch fixes a bug in which you could place an entire wheel of cheese on your hook, harking back to that golden age in which man held total dominion over beast, and could deposit entire units of groceries into their homes without scrutiny. A baguette in an estuary. A cheese in a lagoon. A ham in a pond. An egg in a fjord. This is a free to play fishing simulator with microtransactions and RPG-style survival elements. You assume the role of a fisherperson, requiring only food, coffee, and the raw thrill of the sport to stay awake around the clock, as you drag fish after fish out of the wetness to sustain your bizarre and self-imposed lifestyle. 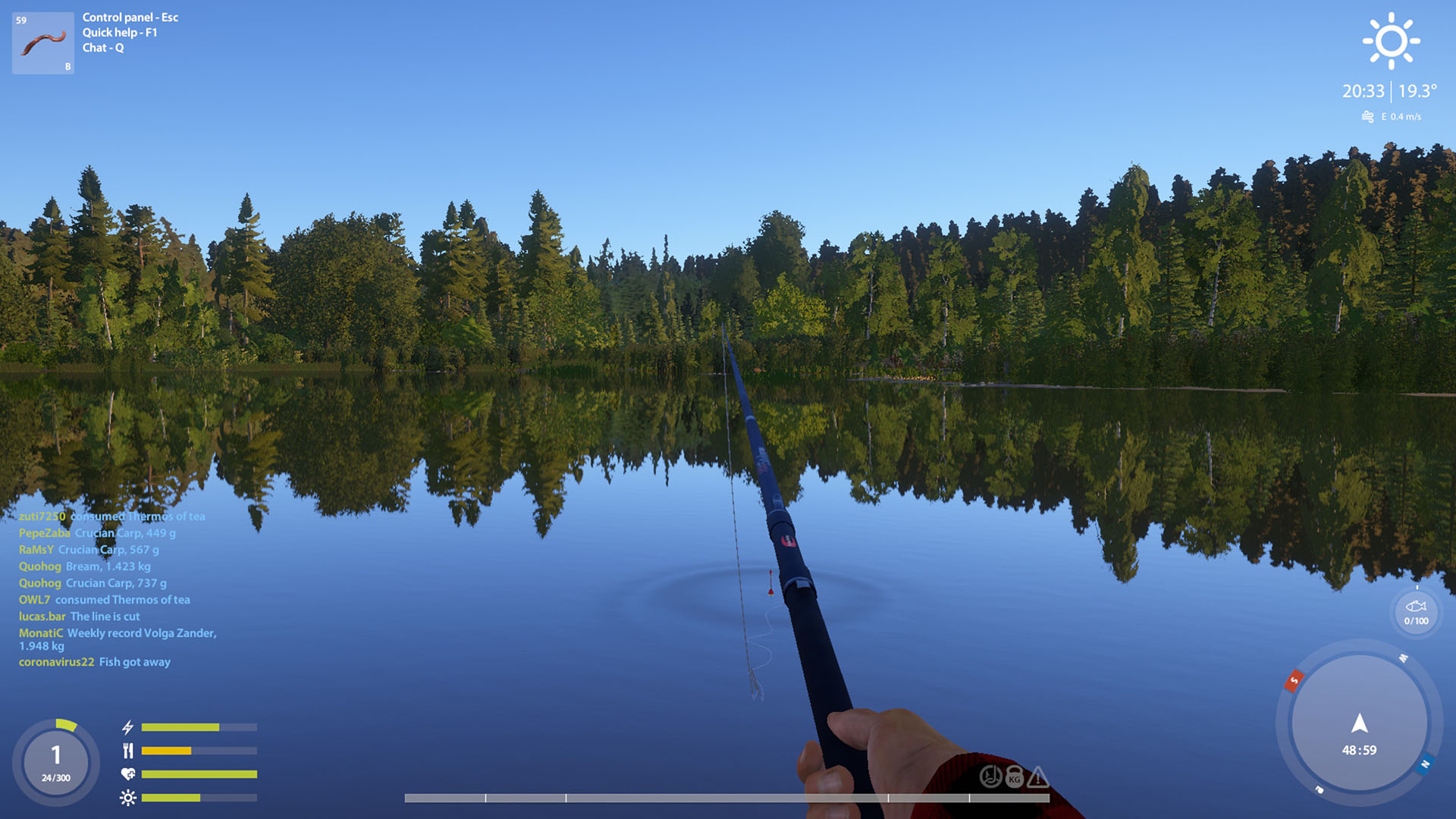 Having been fishing twice with my dad, I can confidently report that this is a detailed and realistic simulation of man-on-fish violence. Your inventory is a bottomless Mary Poppins knapsack of rods, lures, baits, reels, hooks, floats and other assorted spinning, whirring doodads. You can adjust things like line friction and brake slipping and plumb depths, which are all terms I’ve very likely misremembered, but which describe actual fine adjustments you can make to your virtual fishing rod. If you whip your rod back and forth the hook and the weight spin around with convincing physics, imploring you to spend a few idle minutes attempting to get them up to such a centrifugal velocity that they snap off and end up in a nearby tree. This sadly isn’t possible, at least when I’ve tried it.

One thing I can’t recall about the times I went fishing with my dad, is quite how long it took for a fish to bite. Memory has a way of recording over the boring parts and leaving you with only the highlights. I do remember baiting a hook (not simulated here), casting a spinning reel (simulated with a simple force meter and some wind considerations), and bashing a fish over a rock in fright when one bit me (not simulated, though mildly traumatic), but if my foggy memory serves, the rate at which fish bite in Russian Fishing 4 is just as slow and conducive to tedium as it is in the real world. You’ll spend whole minutes eyes-locked on to your float, waiting to see it twitch or vanish, your limited spare time evaporating as you do. 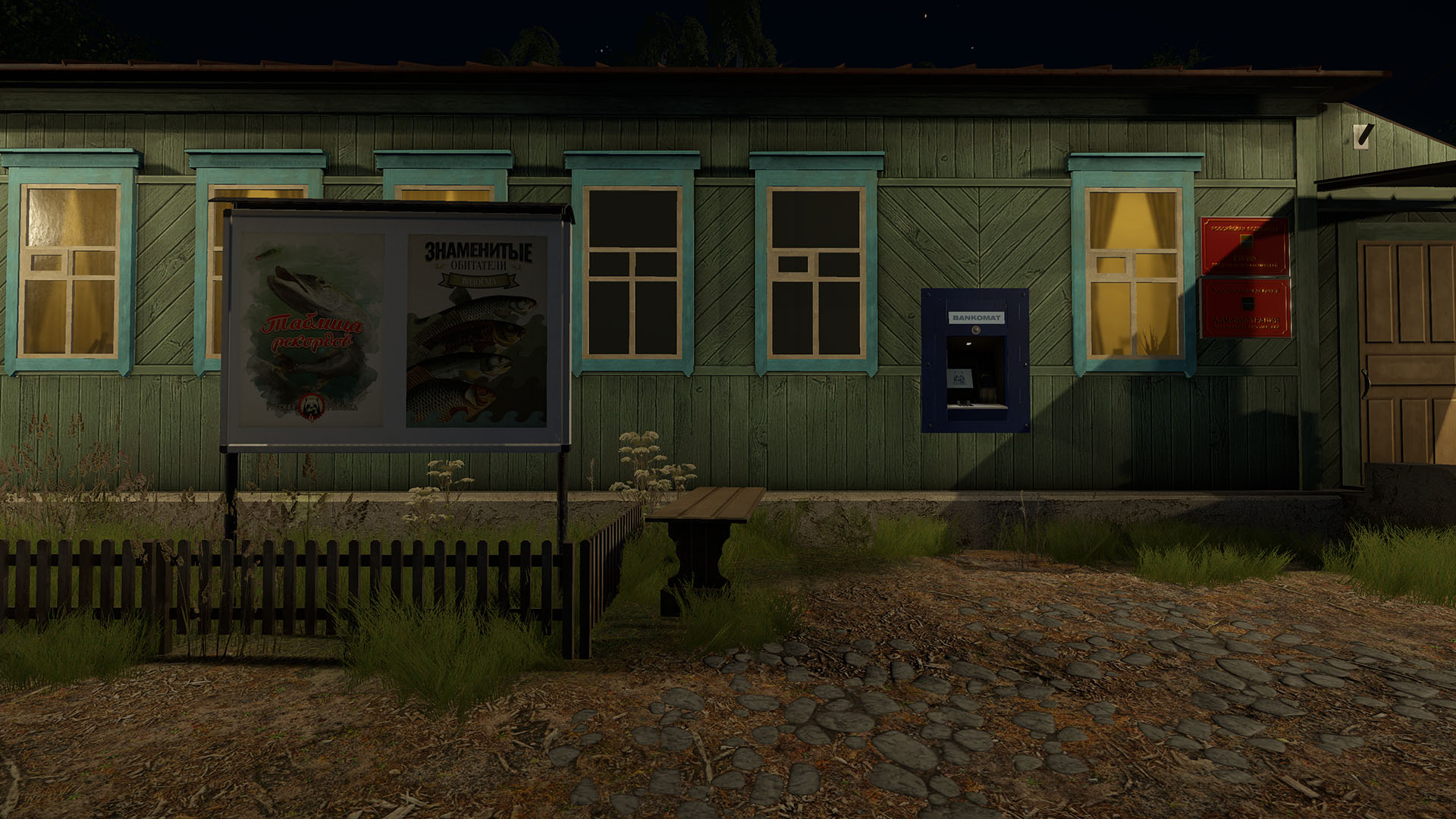 This is as much a criticism of fishing as it is Russian Fishing 4, but you can’t help imagining your future self on their deathbed, glaring at you backwards through time as you sit motionless and mouth agape in front of your screen, extinguishing your precious minutes as though they would never run out. The float finally disappears beneath the surface, you hold the left mouse button, and yank out a 19 centimetre perch. It gawps at you accusingly, the light glinting through its translucent fins, catching its finely detailed, bump-mapped scales. Other players’ catches appear in real time in the corner of the display. Somebody called “coronavirus22” has caught a record breaking 1.2kg carp, a sobering snapshot of who – or what – you might eventually become if you kept playing.

Even the most patient of fishing fans would become disheartened by the pace of this simulation, which is slowed even further by the glacial grind of selling your puny catches to afford better equipment, as well as the gradual levelling up required to visit better fishing spots. Geared towards pushing you into a microtransaction or two, progress is tuned to be mildly arduous and is, by the very nature of being a simulation, entirely removed from the real world benefits of impaling fish on tiny hooks for fun. Standing alone on a riverbank eating egg sandwiches, drinking tea and sucking down great lungfuls of clean country air is nourishment to the body and mind. 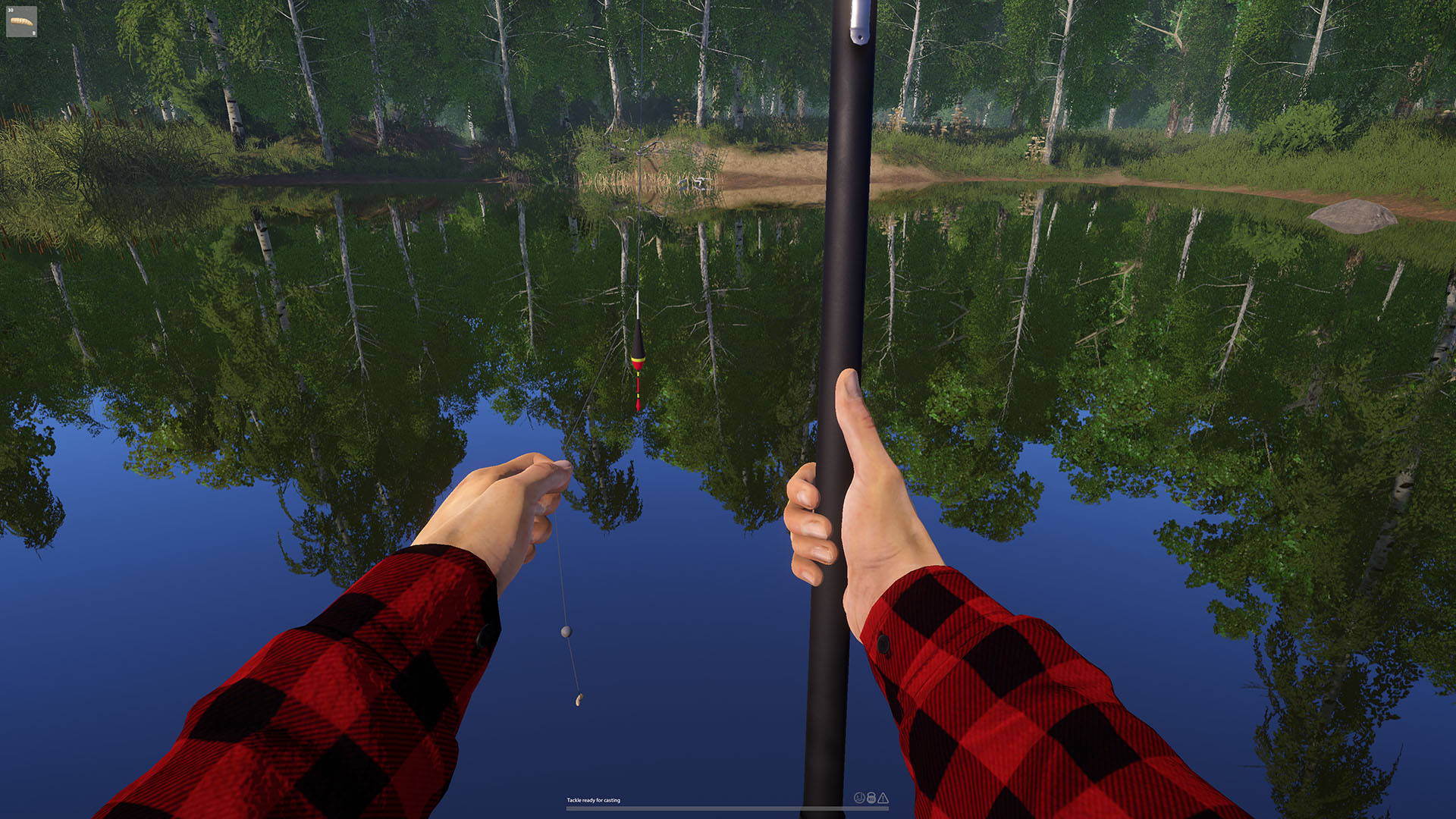 Russian Fishing 4 exposes the sport’s greatest lie. Fishing is just an excuse for people to stand outside for an afternoon, to embrace the calming solitude of nature near some water. The part where you haul unsuspecting animals out of their houses using a big stick is beside the point, just something for your hands to do so that you’re not just standing around like a lamp post, so that you don’t appear profoundly melancholy to any nearby observers. Russian Fishing 4 can’t simulate that.

And so, I put my rod down and step away from the riverbank, turning to face the surrounding woods. An invisible wall prevents me from leaving the designated fishing zone, though with some well-timed sprinting and probing of the fence I manage to break out of this glass cage. I push on into the wilderness, the trees gradually losing their definition until they are simple cardboard cutouts. I am a goldfish escaped from its bowl. The landscape flattens out into a featureless plain. 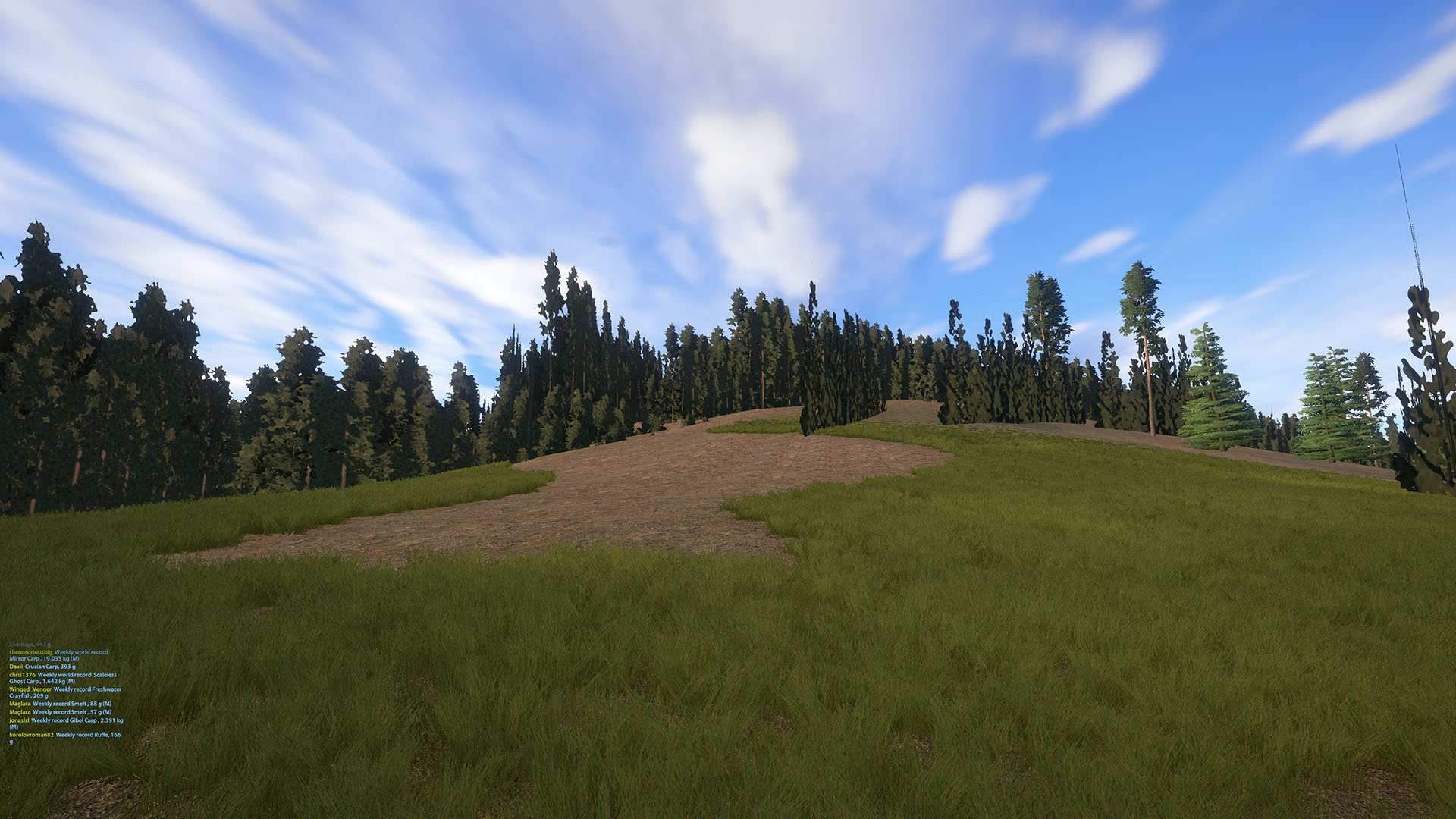 At the edge of the world is sharp oblivion. The sky reaches down beneath the earth and on and on and on. There are no fish here, and so I cast my rod and wait. 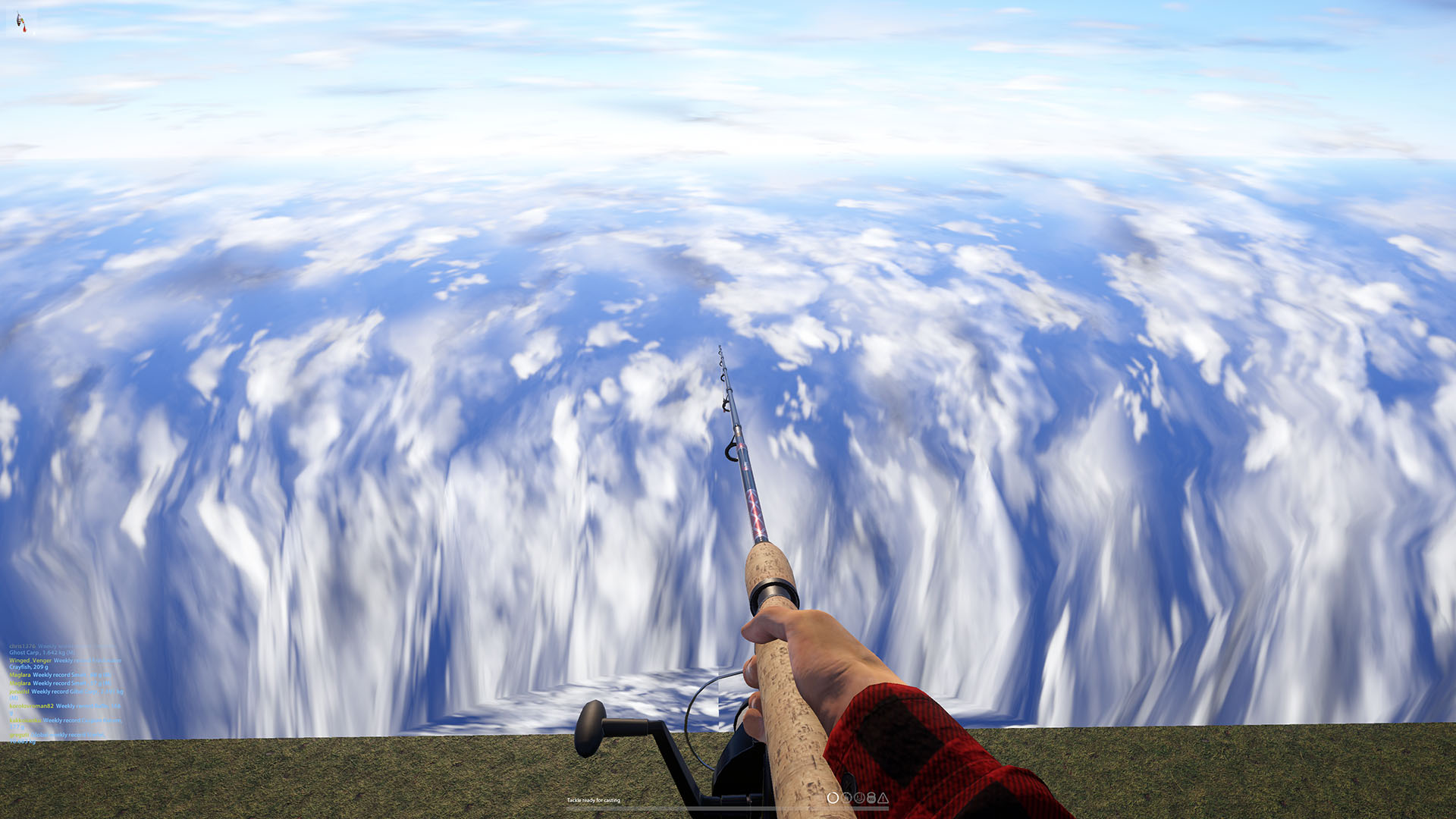