If you click on a link and make a purchase we may receive a small commission. Read our editorial policy.
Premature Evaluation is the weekly column in which Steve Hogarty explores the wilds of early access. This week, he's hiding in a bush making coyote sounds to prevent the colonisation of North America.

Hickory Resource Manager 2019, more popularly known as This Land Is My Land, is an open world stealth game set in the 19th century (cowboy times) in which you play a Native American chief re-establishing his lost tribe by settling new camps, picking flowers and murdering (or just frightening) the invading colonisers. It is Red Dead Redemption turned on its stetson, ass up and spurs pointed skywards, a refreshing inversion of the traditional narrative of the oppressors in which the pox-ridden frontiersmen are the baddies and the indigenous peoples of North America are the heroes.

It’s best not to think too hard about the politics of This Land Is My Land, because there really isn’t very much to mull over besides this general idea that Native American warriors are kind of cool and can do all sorts of nifty tricks. This is broad strokes stuff. You’ve got a bow and arrow, you can lay poison traps and lure unassuming yokels out of their bivouacs by mimicking coyote sounds while crouching in a nearby bush. Rather than even attempt to grapple with thorny historical nuance, your character is a hand-wavey amalgamation of the many hundreds of different tribes who occupied most of North America at the time. As the sole representative of all Native Americans, you are charged with the impossible task of stemming the spread of unruly cowboys across an enormous map comprising forests, rivers, trails, mountains and – everybody’s favourite – prairies. 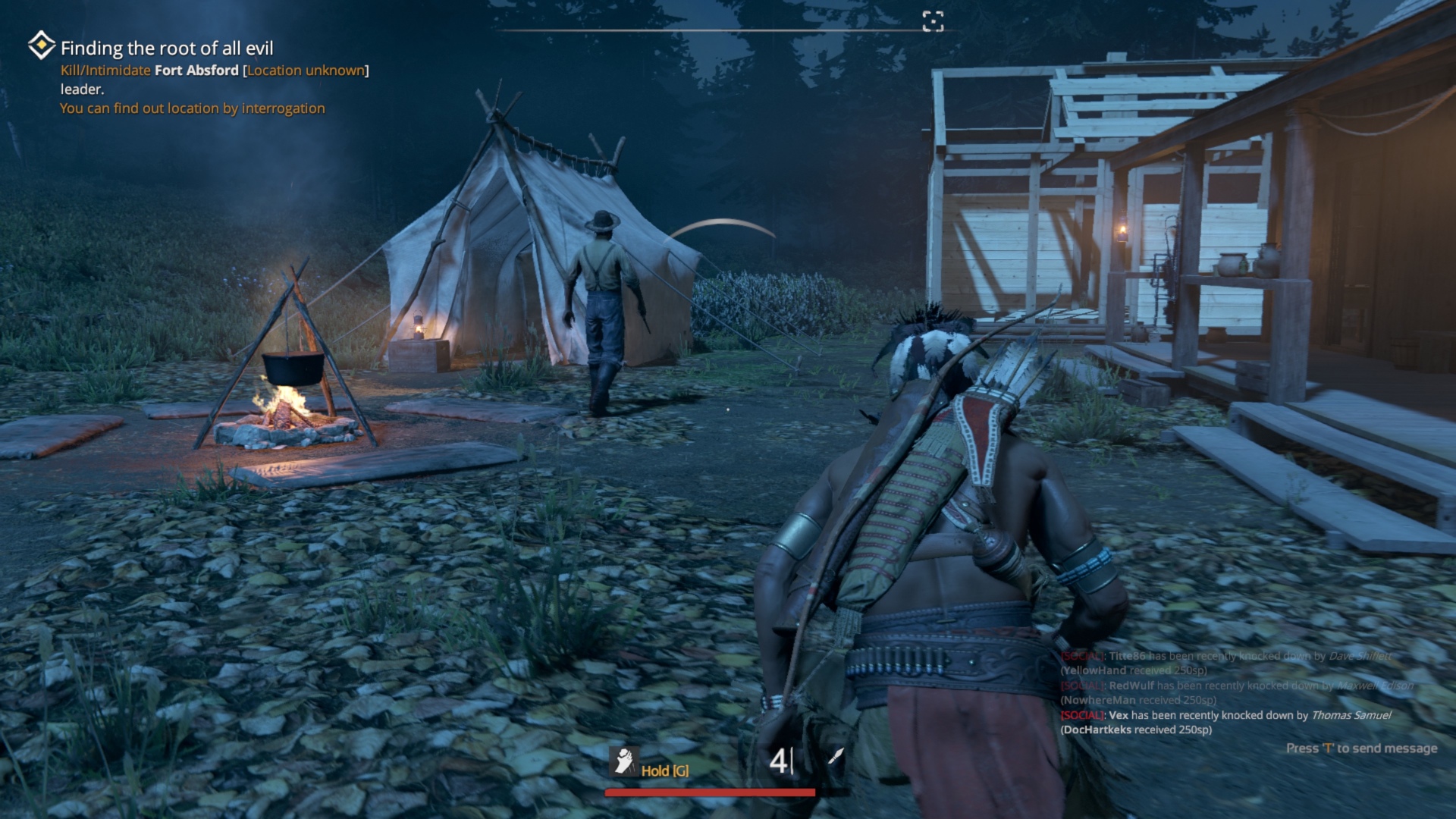 Your resistance effort, while ultimately doomed to fail (spoiler for anyone who hasn’t finished season one of America), is incredibly hectic nonetheless. This Land Is My Land is one half strategy and resource management game, in which you hoover up the vast quantities of hickory and flax required to expand your settlements, and one half leaping out from behind trees to slash some idiot’s throat and steal their tinned beans. The strategy part plays out like Carrier Command in the Wild West, as an unseen opponent quickly works to claim chunks of the map while you try to do the same. The action part is essentially Far Cry with Indians, as you ride to the perimeter of enemy camps on horseback, creep around on nearby bluffs scoping out their positions and movements, before slinking in and either killing everybody or getting spotted and blown away with modern guns.

You’ve got a camp back home, with half a dozen or so warriors who can be assigned to gather resources from the lands around the area that you control, or to craft new tools and items in your absence. Set your buddies off gathering wood and you can turn your base into a bow and arrow factory, while you scoot off to raid nearby enemy camps and free more of your fellow warriors. Settlers can be interrogated at knifepoint too, leading you to new objectives – typically killing or intimidating some random NPC in a nearby campsite – which reward you with buckets of skill points you can use to upgrade your abilities and craft more useful stuff. Settlers also have pistols and rifles, which you can pilfer and use during your raids or when hunting. Bows and arrows are naturally more conducive to staying hidden. 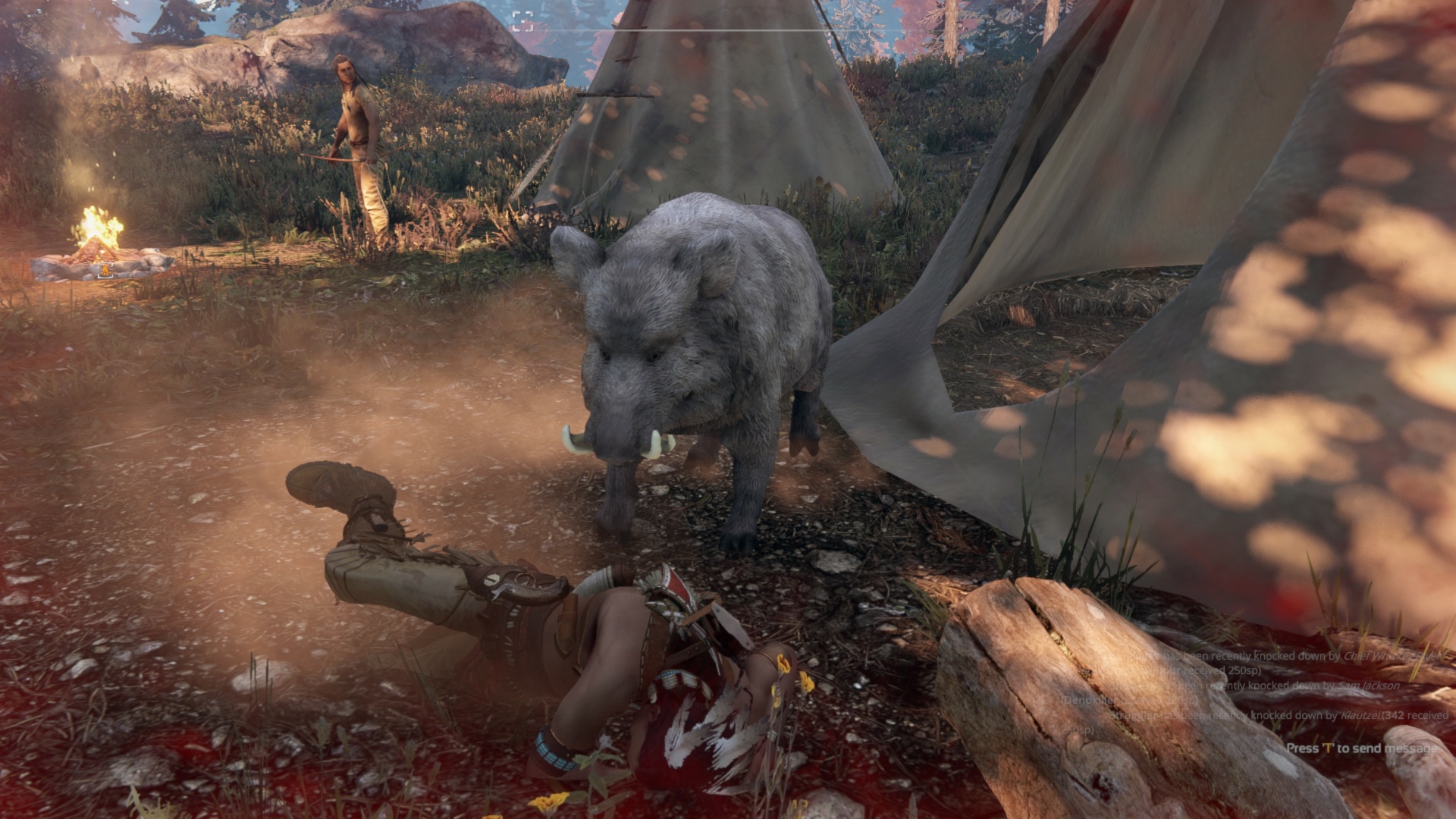 Once you’ve got enough boar pelts, hickory and flax under your belt, you can start to build new settlements, upgrade them and expand your borders, recruiting more warriors as you go, arming them with better weapons and assigning them patrol routes around your different camps. This Land Is My Land meticulously simulates the administrative challenges in managing a growing tribe, ensuring that for every thrilling midnight raid of a colonist outpost you’re brought back down to earth by some good old hickory stock management. As an innately conflict-averse person, I much prefer this hickory-focused aspect of the game. Booby trapping an enemy campfire by loading it with gunpowder is fun – I understand this in an academic sense – but moving mushrooms around my camps to ensure a steady production of mushroom soup is the kind of nonsense I think about as I fall asleep in bed.

Sadly, the early access version obfuscates a lot of that empire management energy behind a stupefying interface and turgid inventory screens. At any given moment it’s hard to tell what your warriors are actually doing, whether they’re whittling up some fresh arrows, chilling out in a wigwam or hunting deer, as they operate as a sort of amorphous hive mind rather than a set of individuals. 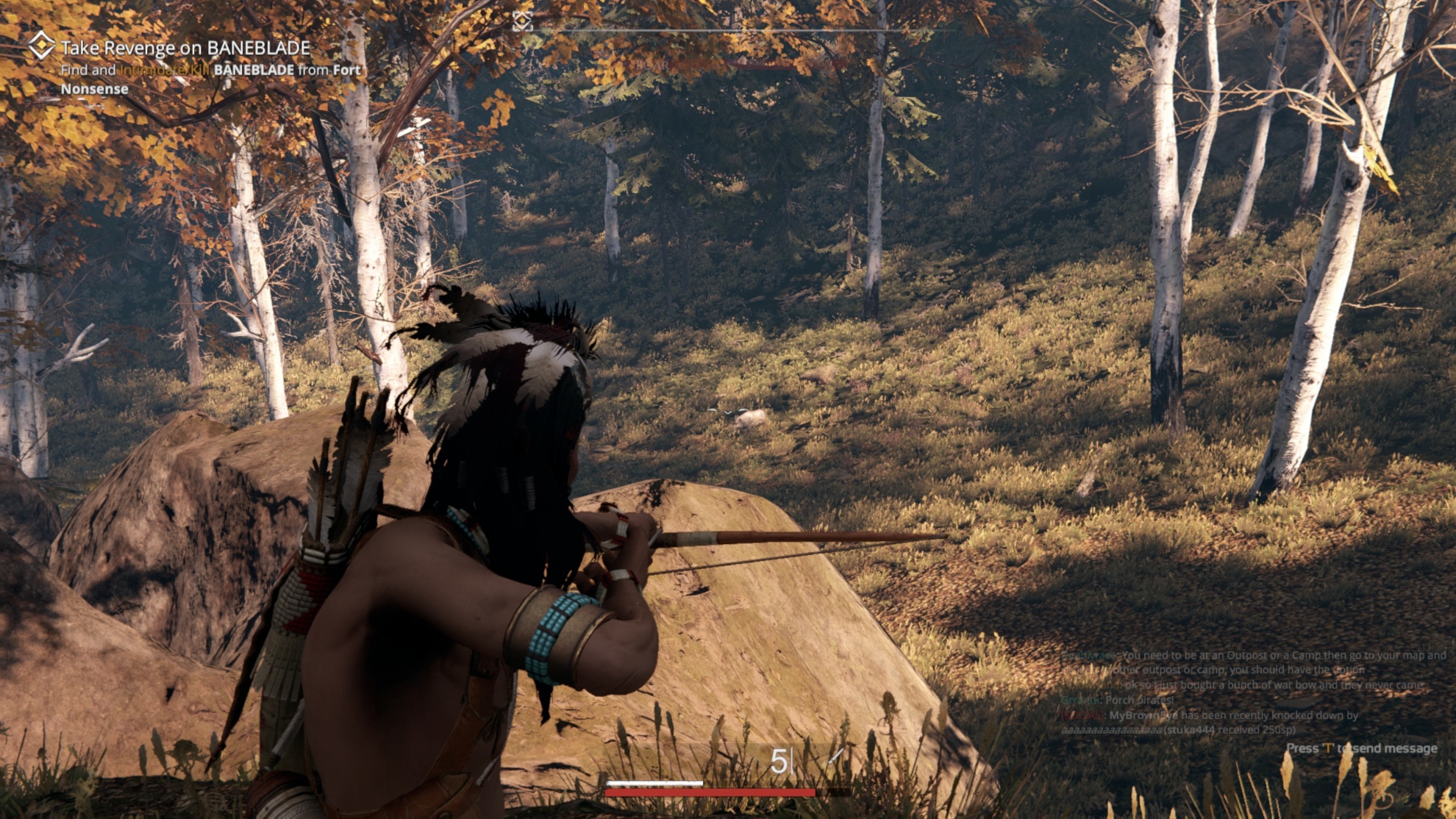 On two occasions half of my population vanished into thin air, apparently captured by lawmen in the six hours that whizz past each time you rest and save at a campfire. Under constant pressure from encroaching enemy territories, your hard-won progress feels too precarious, too fragile and way too slow to be enjoyable. The futile resistance of the colonisation of North America is stressful, it turns out, with too few moments of respite.

On the action side of things, the game’s AI reveals some rough edges after a few repeat encounters with enemy camps. A mixture of limp sound design and rough animations means bows feel too airy, your aim feels unsatisfyingly wonky and your movement wispy and weightless. Similarly thin are the environments, which are very pretty, but aside from the obvious differences in biomes there are no real landmarks or interesting features to behold. Instead the world seems only superficially detailed, a repeating tapestry of hickory and flax to be harvested. 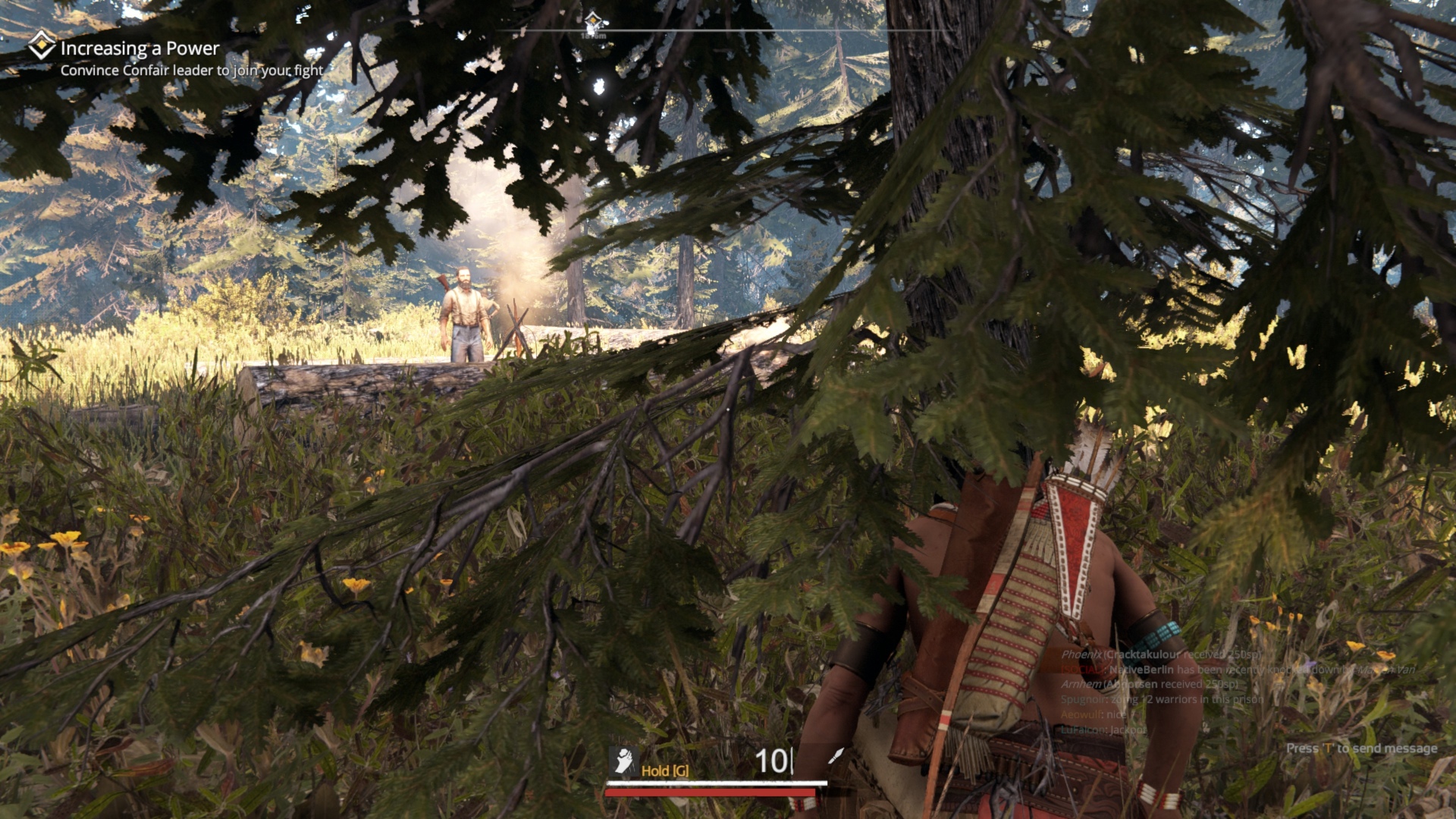 But there are loads of lovely ideas here: each time you die the bad guys will increase their patrols and you’ll be given a special objective to seek revenge, Shadow Of Mordor style. You can poison meals in enemy camps, or call in your fellow warriors for an all-out assault. If you’re in a pinch and need an emergency horse you can lay down “horse bait”, and four or five of the things will materialise out of the woods like Miyazaki spirits. These are all marvellous features floating in unpolished game brine, waiting to be connected up to a bigger picture that hasn’t yet taken shape.

Between now and the game’s final release, This Land Is My Land should aim to tie all of these disparate ideas together into something more compelling, and supported by a camp management metagame that makes more intuitive sense and offers immediate, concrete rewards. Right now the game amounts to less than the sum of its parts, a frontier adventure in fragments, but one with enough momentum to reach its true potential as the glorious hickory management sim we’ve all been holding our breath for.