Premature Evaluation is the weekly column in which we explore the wilds of early access. This week, Fraser’s back on the roguelikes with Wayward Souls. It looks like Secret of Mana, but it’s meaner.

It might have been a mistake to play as the mage. Wayward Souls’ dungeons promise death at the hands, claws and slimey appendages of countless beasties, but my first killer was just a miner. He threw a pickaxe at my head. I’d made it to the third room of the first floor. I didn’t even get to find out what her deal was. Every hero’s got some reason to keep fighting, with stories that are woven into the otherwise random maps and between levels. It’s something to spur you on when you’ve been killed by a plain old bat. Twice.

Against all the odds, I persevered… is what I’d like to tell you, but no, I threw the mage in the bin, along with her pitifully tiny health bar and my confidence. Developer Rocketcat Games cites Secret of Mana as Wayward Souls’ greatest inspiration, but it’s got the cold, black heart of a roguelike. Lives are fleeting, and you’ll go through plenty, each starting fresh at the dungeon entrance. 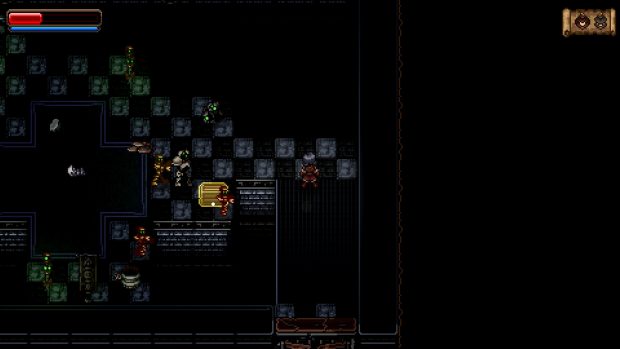 It’s a game that puts you on the back foot immediately. Before I unwittingly picked the trickiest character to start with, I’d gone through a brief tutorial that put me in the steel boots of a paladin. He’s not a playable character until he’s unlocked far into the game, making him a bizarre choice. The tutorial will teach you to use his holy magic, before killing him and then making you pick a character with an entirely different set of skills.

Of the six finished characters, three are available off the bat, and the warrior and rogue make much better first impressions. The mage might be able to shoot fire out of her hands, but having a shield or the ability to dash is infinitely more helpful. They’ve also got considerably more health, which is worth all the magic in the world in a game where healing potions are rare treasures.

After a few false starts, I found my rhythm with the rogue. It’s an extremely satisfying dash, letting you hurtle headfirst into packs of monsters and projectiles like you don’t have a care in the world. It gives you that safety net you need so you can make a mistake or two. It also complements the backstab ability, so you can dash behind an enemy and then get rewarded with a bit of extra damage when you attack. An energy bar determines if you can power up your attacks, which in the rogue’s case leads to a kick that stuns. Energy can also be drained by dashing, but it regenerates at a brisk pace - just long enough so that you can absolutely get caught out and surrounded by a pack of enemies, but you know that if you can just hold out for a little bit longer you can escape. 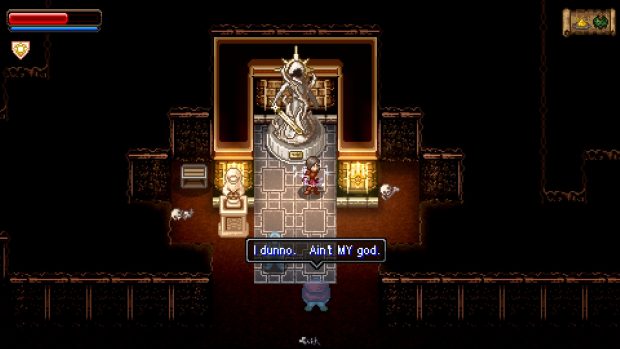 One place the rogue differs from the other characters is that she doesn’t rely on ability charges. Everything from the warrior’s shield to the mage’s fire spell uses up a charge, and once it hits zero, the ability can’t be used. More charges can be found inside the dungeons, but I still found myself saving them up even at the risk of my sole life, just because I was worried about running out. Since the rogue’s handiest ability is tied to energy instead, it’s a considerably more stress-free dungeon romp.

Every characters uses consumables, though. They all have access to different types, and the rogue gets an appropriate selection of blinding powders and nasty poisons. I got a lot of use out of the former in particular, using it to stun large packs of enemies so I could have enough time to dash behind each of them and use my backstab. It’s mess-free murder. Using them is a little awkward, however. While you can bind abilities to whatever keys you want, you have to go into your inventory to use consumables. It interrupts the flow of combat, and it's just fiddly. 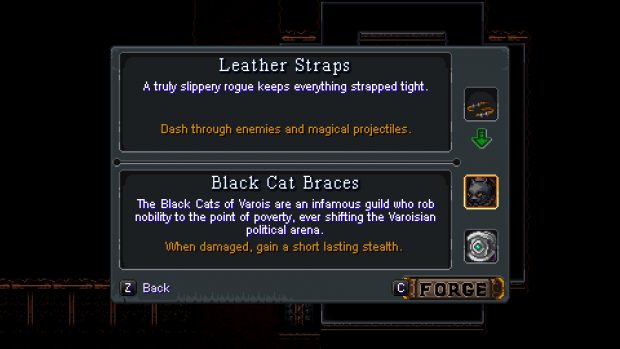 Instead of using experience to empower your intrepid adventurer, you’ll be on the lookout for magical forges. When you find one, you’ll be able to upgrade one of your items, transforming them into an entirely new sword or fancy trinket, complete with new abilities. So the rogue’s dash can be upgraded to make her briefly stealthy, but that means you have to forgo another item. Vague descriptions make picking one tougher than it should be, though. “Short lasting stealth” and “more damage” are not especially helpful.

All of that dies with your character, of course, but some progress is saved. When you unlock the next dungeon, the character you were using will always be able to start there. If you want to try out a different character, however, you’ll have to start at the mines and fight your way through those dreadfully and inexplicably angry miners. As you traipse through the dungeons, you’ll also pick up gold coins that can only be spent at the character select screen. There, the coins can be used to purchase increasingly expensive permanent bonuses. The health-related ones are the only necessities, but there are a couple of handy character-specific bonuses that are worth splashing out on, especially since you’ll quickly gather piles of the stuff. The rogue's dash can be augmented to disorient enemies when she passes through them, and every character gets more ways to regenerate energy and get extra ability charges. 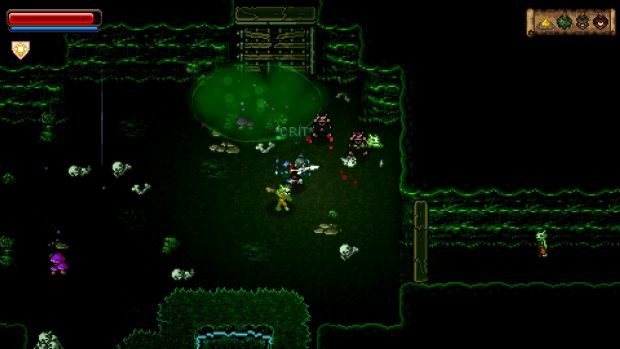 Wayward Souls originally launched on Android and iOS way back in 2014, and while its mobile legacy isn’t obvious, the result is still a game that feels like it was designed to be played in short spurts. Maps can be cleared quickly, and with no deaths you can probably hit the second dungeon within 10 minutes. It still maintains the constant sense of attrition, though, with each little room trying to sap your health and resources. In a few minutes, it squeezes in a lot of fights and plenty of ways to die.

The temptation is to rush through, desperately trying to find the stairs to the next level, but rooms frequently go into lockdown until you kill everything inside them. Instead of being a big fight all the way to the exit, each map is full of discrete battles that, despite being randomly generated, feel like handmade challenge rooms. They never quite become elaborate, but the algorithm produces interesting configurations and occasional oddities.

I wandered into one room and found rows of tables surrounded by an army of monsters. It was like I’d just stumbled upon the dungeon cafeteria, and they were all quietly enjoying a well-deserved meal. There was this brief, comical pause, just for a second, and then they all turned around at once and immediately started throwing boulders. Rocks, everywhere. It was a heck of a food fight. 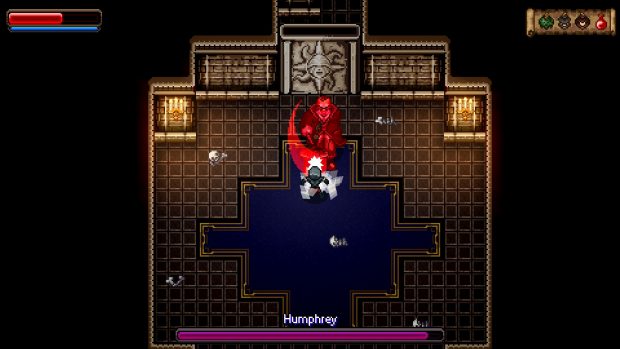 While the levels are maze-like, Wayward Souls cuts out a great deal of backtracking. If you wander down the opposite direction from the exit and come to the end of the level, you’ll usually find a teleporter that will take you back to the entrance, and from there you can take the other path. It’s brilliant and should be mandatory in every dungeon. It should be as ubiquitous as manacles.

As I stabbed and kicked my way through the levels, two stories played out. There’s the character story, unique to each adventurer, and the story of the castle itself. The past and present coexist as apparitions appear and history plays out in front of you. These conversations between spectres don’t make much sense in isolation, but as you view these fragments and piece them together with books and letters, things start to coalesce. Your character’s personal quest is more linear. The rogue, for instance, is on a job, but has competition from other ne’er-do-wells in the castle. It’s a race, with cutscenes that play out between levels, and confrontations that take place within them. 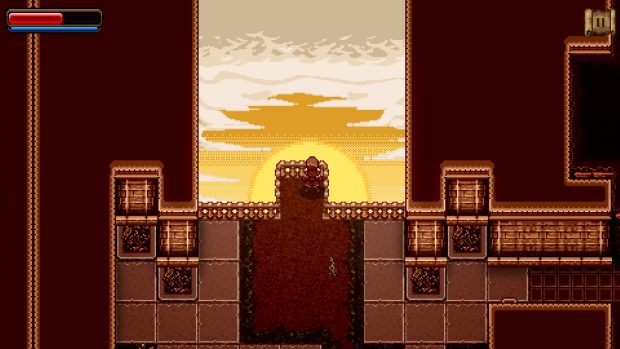 They’re very slight. The breaks in the action are meager helpings of text and brief chats, simple and concise. Each level gave me another scrap, and slowly I was starting to build a picture. I’d learned about the job, the rogue’s treacherous employer and her shifty competitors. But then I died and sat through it again. And again. And a couple more times, until I finally hit the next dungeon. They’re brief enough so that repeating them isn’t a chore, but they don’t really improve the second or third time. You’re just putting in the work to get to the new stuff.

In those instances, it was the pets, not the story, driving me forwards. I don’t know why I keep finding cats and dogs in chests, or who keeps stuffing them in there, but I’ve appreciated their company on my suicide mission. They don’t just offer companionship, they also provide some stat boosts. A few of the friendly critters can even attack enemies. The puppy pounces on them! I’m not sure if it hurts - it is called a “light pounce" after all - but who cares? What a good boy! 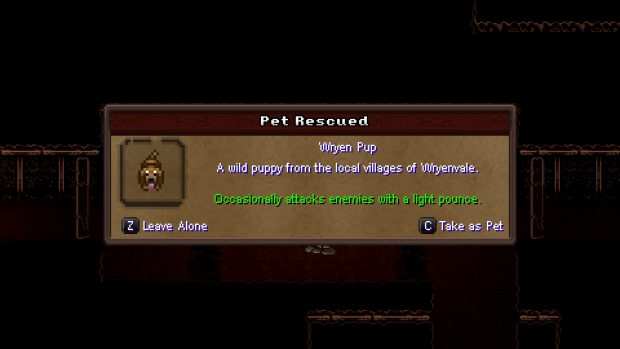 All the cutscenes can be skipped, and the spectral visions don’t stop you from controlling your character, letting you run right through them, so there’s an acknowledgement that you probably don’t want to have to go through that again. It just highlights how hard it is to make a linear story fit into a roguelike. It can be done, but there’s a reason that it usually isn’t. It works against one of the great strengths of roguelikes: their ability to create countless tiny stories and self-contained adventures. Wayward Souls is seven lives endlessly repeating until you manage to survive for long enough to reach the end.

It’s just struck me that this is the second time in three weeks that I’ve been lured in by promises of story-driven roguelike shenanigans, only to be a little disappointed. And Wayward Souls doesn’t even have any giant albino penguins, which is obviously a mark against it. However! It’s still a competent roguelike, and it has the advantage of being almost complete. An endless mode and a new save system are in the works, but all the characters, dungeons and stories are playable now.