I don't go round singing "Maybe It's Because I'm A Londoner!" or anything, but out of all the places I've lived so far, London is the one I think of as home. And this so happens to be the setting for hacktion-adventure game Watch Dogs Legion, which is definitely not called Watch Dogs London despite how often I accidentally say that. It's a dystopian near-future version of London, where the Union Jack has had yellow lines added to it for some reason, and all adverts are holograms now. I played a hands on at Gamescom last year and wrote about how fun it was to tool around London.

I've now had another go, driving and droning around for three whole hours. London is still a delight (I went on a little walk along the South Bank, past the aquarium, the London Eye and the National Theatre, which are all called non-infringing things like British Theatre), but the amount that Legion has improved since I played it a year ago is genuinely impressive. In particular, that weird "play as anyone" bit has been given a proper gussy up. 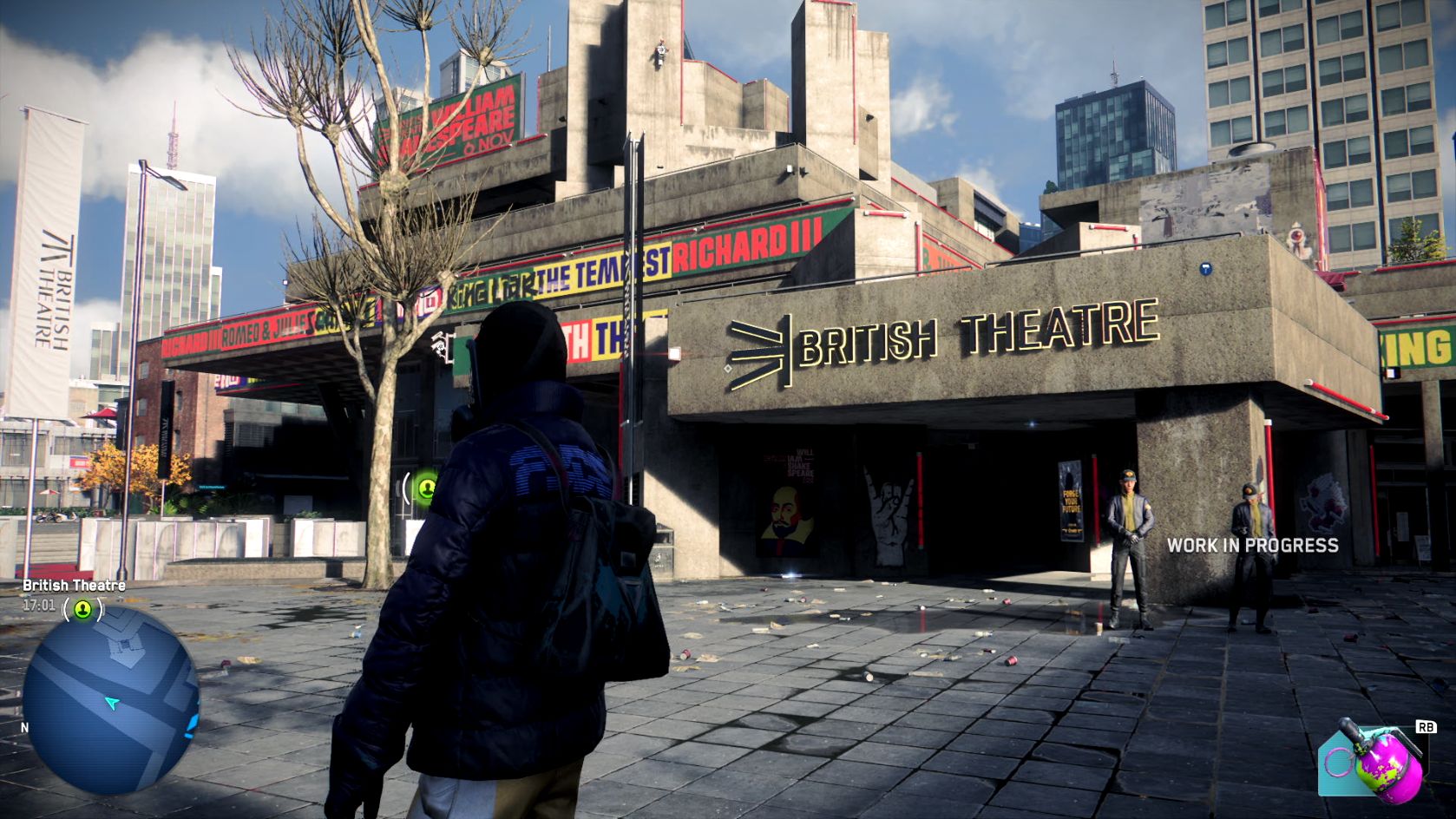 The conceit here is that you can recruit anyone you see in London to join your hacktivist gang DedSec, who have been framed for a series of bomb attacks on the city. Being framed for crimes they didn't commit is basically DedSec's whole thing, at this point. In terms of what you actually do, not a whole lot seems to have changed from Watch Dogs 2 (which was set in San Francisco and therefore had more attractive NPCs). You can hack into security cameras to piggyback off their feeds and surveil a building. You can hack cars to make them drive remotely. Hack people's phones to distract them. Hack fuse boxes to boobytrap 'em.

The difference is that this time there isn't really a main character. You form your team from whoever you fancy. Previously, this had just been, well, literally anyone. And it still is, except now actually interesting people are marked out on the map, so you don't have to spend time trying to figure out which pedestrian you think is the most useful, caught in a paralysis of indecision. You get the feeling these NPCs will have the best animations and voice acting, while the others might be clones or also rans. But further testing would be required. 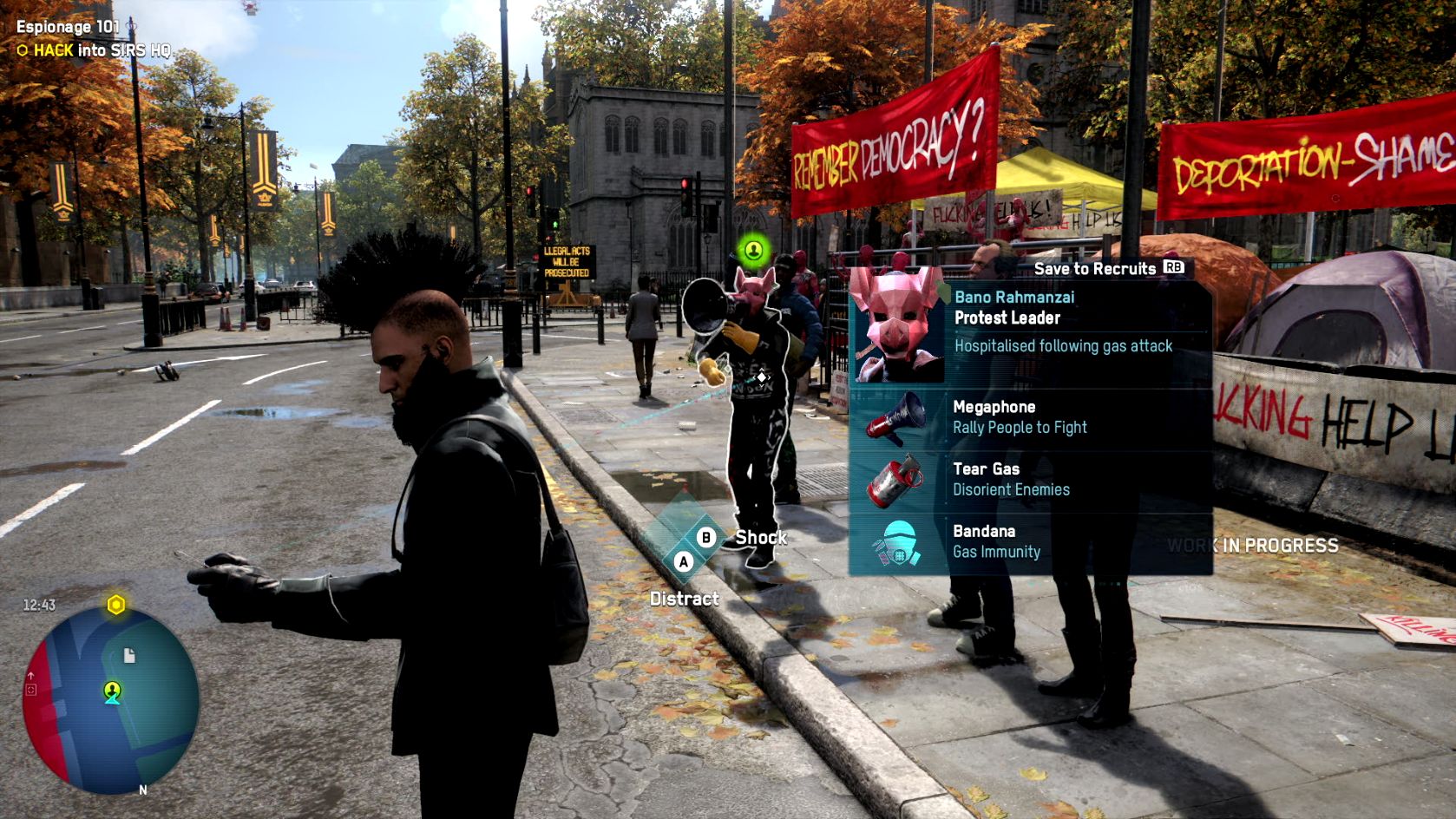 The operatives types have been expanded, too. Now you can recruit a construction worker, for example, who can blend in at building sites à la Ian Hitman from Hitman when he's wearing a disguise. They also smash people with a big wrench, which is pretty cool. Or an anarchist, who is immune to gas grenades because of their face mask. Sometimes an operative might get caught and arrested, locking them out of selection for a while. But fear not! Recruit a barrister and you can get them out more quickly.

The beekeeper can command tiny insecty drones. The football hooligan is great at punching stuff. The spy gets a cool spy car with rocket thrusters. And you can switch between operatives on the fly, so if you try a mission with one and balls it up a bit, you can shake the authorities and try again with someone else. Each has some different special abilities or weapons suited to different tasks.

Though some characters are better at punching or shooting, in general it's advisable to complete your missions like a high tech ghost. Getting caught isn't a death sentence, but it's more difficult, and you don't feel as cool afterwards. The London of the future has more enemy drones than the San Francisco of the near past, but you can still use things like the little spider drone.

There are so many options, in fact, that I ended up forgetting to use them a lot of the time. It's the sort of game that needs more than three hours to get properly comfortable with it. I do think that, perhaps, the full game will suffer for not having a protagonist. There's no poster boy, no Marcus, no Wrench with his infinitely cosplayable emoji mask. The most constant character is the advanced AI guiding you, who sometimes swears and it's a bit weird. But at the same time, getting the team together is fun for the same reason it's a good bit in Ocean's 11 or The Avengers. 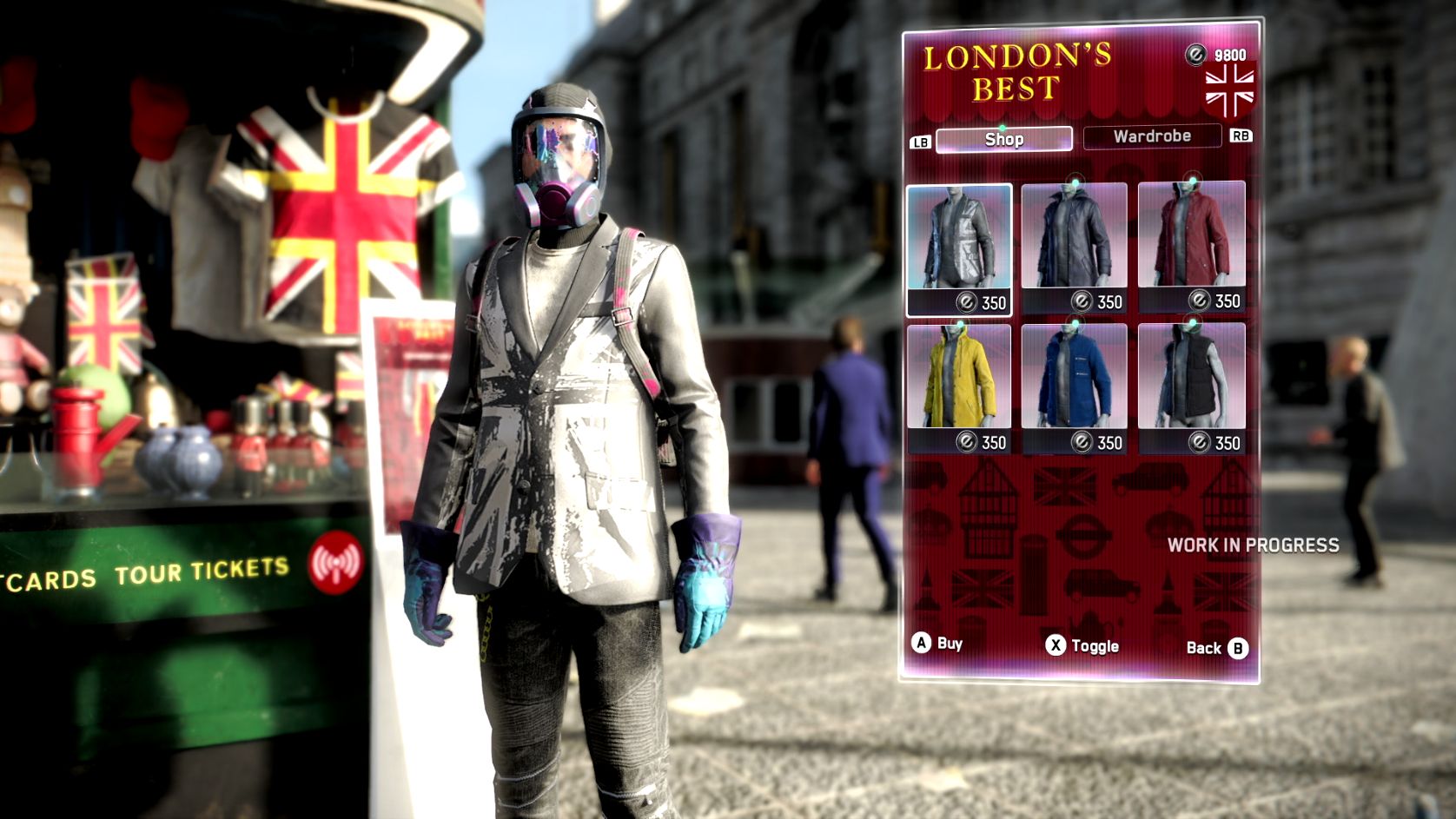 The enemy in Legion is a little more defined. State security has been contracted out to a company called Albion (emphasis on the perfidious), who are obviously a bunch of grim fascists. They are lead by a man called Nigel. You've also been contacted by a mysterious, anonymous 'K', who was the one actually behind the bombings. There are secret plots afoot! London must be liberated!

It seems to want to be liberated judging from all the protests everywhere, with signs like HAVE A HEART YOU FASCIST FARTS and NOWHERE TO SLEEP? STAY WOKE!. Taking back the city is a case of following the main missions, whilst doing the ol' change the map from one colour to another. The various boroughs start off as oppressed, but by recruiting more people, sabotaging Albion-controlled operations, or replacing their propaganda with your own propaganda about how DedSec are good, you can liberate the areas one by one. It's a bit like how you could free London in Assassin's Creed Syndicate, but more complex and engaging.

I did do a brilliant job of liberating an intel source from where they were held captive in a building site. I also liberated some data from some Irish gang leaders without them knowing I was there, and liberated money from some iPads. But sadly I didn't liberate any geographical locations. 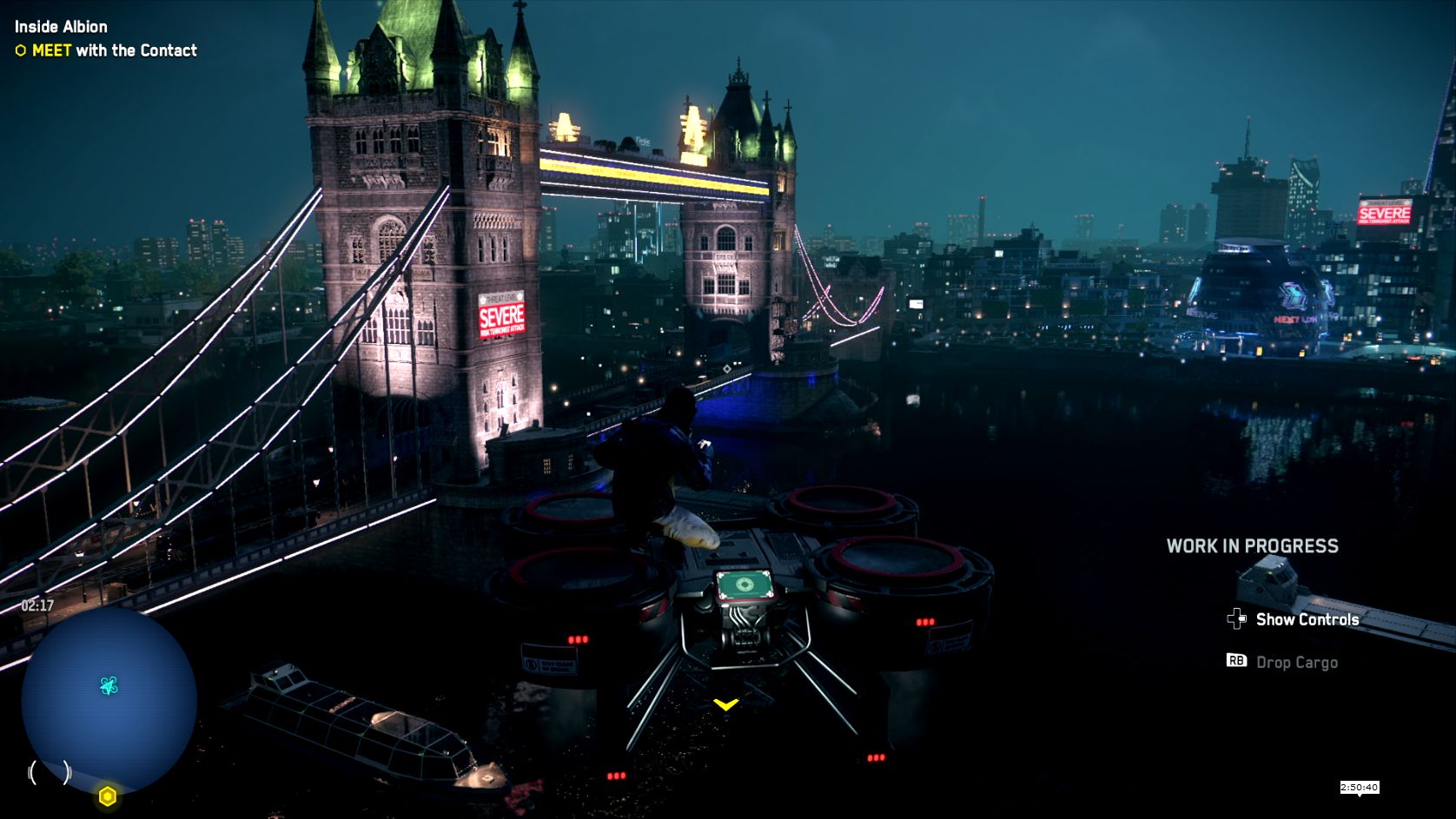 And, as I said, it does feel like a London worth liberating. For all that we joked about how it was going to be well cockerney, Legion has made a London that feels London-y. Not only were there a good mix of London-specific accents, there were also accents from all over the country and all over the world. I was surprised at how close it feels to being the big messy melting pot that London is. At no point did I feel like the game was trying to aggressively prove how London-English it was.

Apart from the swearing. The swearing could do with some work. Yeah, we like a good swear in this country, and I'd venture to say that we're some of the best in the world at it. But presently, Watch Dogs Legion feels like the ruderies were assembled from a fridge magnet pack called UK INSULTS. I heard someone say "Check out this knobhead minger," which I can almost guarantee is a combination of words nobody has ever said in their entire lives. 100% not getting recruited into my gang if I catch you saying that. You fuckwit twat fanny.