I don’t watch much horror myself, so forgive me. But you know those trailers? The ones where there’s a cabin in the woods and a group of smiling high schoolers descend upon it? They flip up the trunk of their car, eagerly fling their suitcases on the wooden decking, and chortle about how they are going to have a rad time. Tropicana in the morning, red cups and beer pong in the evening. Then someone learns the murderous great grandfather of Tommy used to live here and poor Sarah spots an eyeball through a floorboard.

This is the feeling I got from puzzle adventure game Bugsnax. It is cutesy and whimsical at first glance, but there’s clearly something up, something simmering under the surface. I spent an hour with the game’s opening portion, and throughout my hair follicles were semi-hardened, primed but unsure of whether to fully extend or not.

Right at the beginning of my unsettling adventure, I tuned in to a sepia toned video sent by Elizabert Megafig, a legendary explorer who urged me to join her on Snaktooth Island. She recently discovered Bugsnax, half bug, half snack creatures that are ever so delicious, and I was just the Grumpus (the race of seal/croquette hybrids that inhabit the world) she needed to share her story with the world.

Once I had moored up at the island, however, I immediately spotted Filbo, one of Elizabert’s colleagues, sprawled on the ground in a daze. My ‘this-is-bad’ senses prickled straight away. After a quick chat with Filbo, I came to realise two things: Elizabert was missing, and the game Bugsnax centres around catching bugsnax and feeding them to Grumpuses. This was a double whammy almost urging me to get uncomfortable. Here, Ed, have a seat on this sofa which caves inwards and lacks back support. 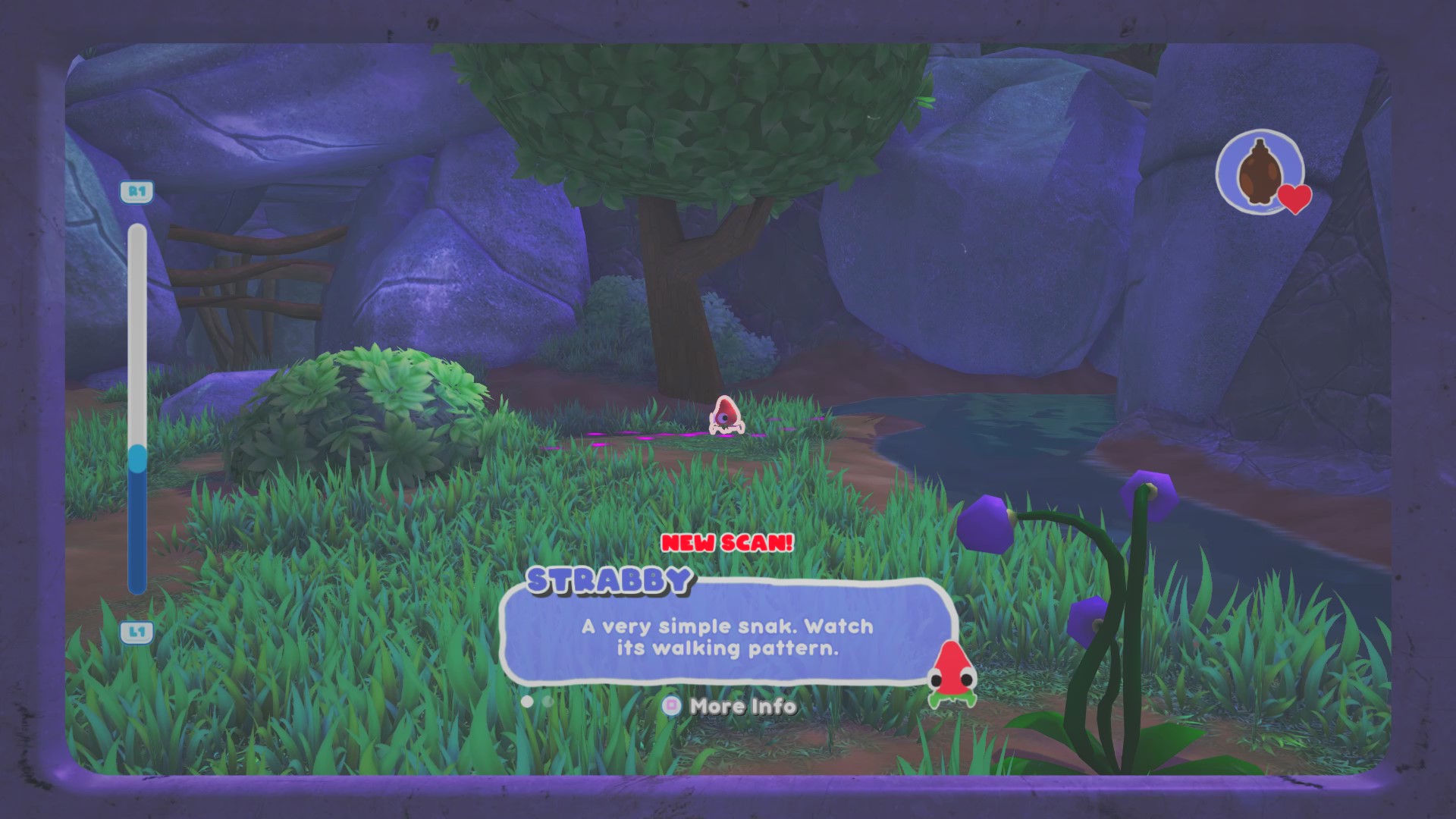 That doesn't mean it wasn't fun, though. My first quest was to feed Filbo, and there happened to be a walking strawberry nearby. I whipped out my Snaxscope, an invaluable tool in Bugsnax, and scanned it. This identified it as a Strabby, and revealed its patrol route on the ground. A snippet of text gave me a clue as to how it behaved and what I should be looking out for. In this case, I needed to observe how it moved. Simple enough. I then carefully placed my Snaktrap, another tool I could select from a radial menu, and hid behind a rock. As soon as the Strabby wandered into its clutches, I activated the trap, locking the Strabby inside.

I then plopped the Strabby straight down Filbo’s gullet, like I was feeding a penguin at a zoo. His right arm transformed into a strawberry stump. It didn’t alarm him. In fact, he merrily described how it was merely a normal side effect of eating them - but he spoke with a little too much relish. He played off a very problematic bodily reaction in a heartbeat. Like, hang about, your arm is now two strawberries that look like they’re grafted onto you, mate. Is that not an issue?! At this point I thought perhaps I hadn’t just fed Filbo to help him recover: I’d sated something deep inside of him. I could tell he hungered for more.

So, naturally I followed the unnervingly happy-go-lucky Filbo as he introduced me to more characters, more bugsnax, and more tools. And honestly, I wouldn’t be surprised if the sequence of events I’ve described above forms the backbone of what you'll be doing as you progress. “Find me X so I can eat it” made up my hour.

It's simplistic, but there are some layers of complexity. It's up to you to figure out how the bugsnax species behave, both individually and with each other, as well as how the surrounding environment is laid out before chucking that net or laying a trap. This makes Bugsnax as much of a puzzler as it is an adventure game. Each task requires careful contemplation and an understanding of how you can manipulate the bugsnax and their habitat, and when that light bulb moment arrives, it's super rewarding. I felt really clever when I caught myself a Shishkabug (a spider with the torso of a kebab), for example.

I'd learned that Bungers (burger bulls with curly fries for horns) charge towards ketchup, and Shishkabugs stay in their hiding spots. So, after a bit of ruminating, I scared the Shishkabug into a bush, whipped out my Sauce Slinger, laid a ketchup trail to lure the Bunger towards its hiding spot, and slathered the bush with condiment, too. Bam: the Bunger slammed into the bush and knocked the Shishkabug straight into my stubby Grumpus arms. You can witness my triumph in the video below.

Although, as I entered the hub town of Snaxburg and met a few of its quirky residents, I did get this feeling that the open-world, tick-box framework somewhat holds Bugsnax back and keeps it from spilling into a wild, frenzied landslide of surrealism and hunting sentient cuisine. It sounds bonkers, but my strongest thought from stepping into such an obviously zany world was “oh, yep, this is definitely a video game.” Its quest structure almost acts as a reminder that Bugsnax may be all sorts of peculiar, but first and foremost it’s built in a familiar way, and people who've played an open world game before will find this immediately accessible. It absolutely works, but I do hope it leans further into the leftfield the more time you spend with it.

What I did with my hour wasn’t as chaotic or unpredictable as I expected, then, but let’s not forget my gut instinct, that sense of distrust I felt. Perhaps what I did was, in fact, chaotic and unpredictable - I just didn’t know it yet. By feeding their insatiable appetite for bugsnax and attempting to get Elizabert’s band back together, I did question what I was really working towards. I have a sneaking suspicion that as you build relationships with Elizabert's gang of misfits, the story and the quests will spring some subversive surprises.

This uneasy undercurrent rose to the surface just as my time with the demo came to a close. I’d bumped into a Grumpus ominously named “???”. They mentioned a device called the Snaktivator and how it lets you choose what parts of a Grumpus you can transform when you feed them a snack. After helping them test the device by transforming their leg into a strawberry, they scuttled off into the distance. Again, very normal behaviour.

I asked the CEO of Young Horses, Philip Tibitoski, whether the team views Bugsnax as a horror game. "I would not call it a horror game," he said, but he didn't deny that the worlds they create "aren't always at least what you'd expect on the surface. And sometimes, when people are playing, people might not notice those sorts of things, or choose to pass over them, but if you're really paying attention I think it pokes out."

It is poking me in the eye, Philip.

He told me that the team's inspiration for Bugsnax is largely drawn from fun things with traps and creatures like Ape Escape and Pokémon Snap. Adventure Time and Steven Universe are in the mix too. How fun. But imagine dark clouds massing together on the horizon: narratively speaking, Tibitoski gave the cheery Bioshock a mention.

It actually does have something to do with the whole feeding Grumpuses the bugsnax thing, and Tibitoski explained that, once upon a time, they’d looked into deepening these food transformations into something “where you had like Plasmid powers or something like that”, but soon realised it had "ballooned our scope out of control” (which makes sense, since Plasmids are genetic modifications that allow you to shoot bees out of your arm, among many other things).

Instead, the team opted to focus on transformations as a purely narrative device, and Tibitoski said with certainty that we’ll gain a better understanding “of what the bugsnax are, and how they affect the Grumpuses in the game, led by the transformations that you’re putting forth.” I'm not entirely sure I want to know. 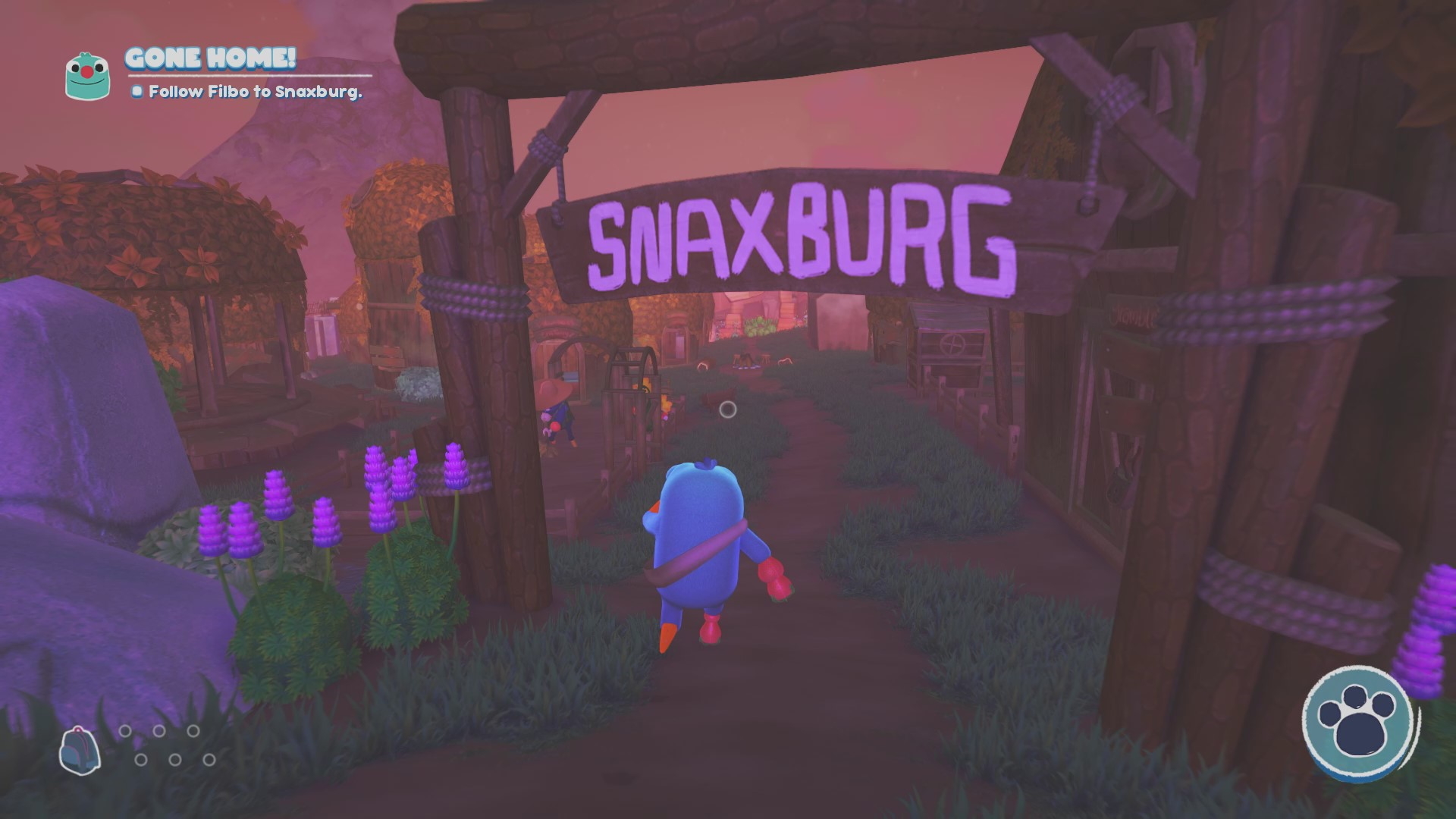 As we talked more about the game’s inspirations, The Island Of Dr. Moreau pops into conversation as well. I wasn't familiar with it at the time, so I looked it up, and learned it's a tale about a mad scientist who creates mutant beast folk. Not disconcerting at all! And, as a topper, Tibitoski brought up Apocalypse Now, the story of a man sent on a dangerous mission to Cambodia to assassinate a renegade colonel who has established himself as a god among a local tribe. Er.

I suddenly remembered seeing a terrifying, enormous pizza moth soaring above me at the start of the demo and I questioned Tibitoski on whether there are more 'mega' or 'special' bugsnax out there. He explains that some are more “background” things. You can’t pin everything down and add them to your collection. Some are mysterious, unobtainable. I pressed Tibitoski on whether we’ll be able to harness the power of all our bugsnax hunting experience and eventually catch the big moth.

He pauses, then says “I won’t say much more than it is not a background thing.”

Safe to say, then, that Bugsnax's cheery theme tune may be the cheery outer layer on a deeply weird centre...