As I am writing this right now, I still exist in that dreamlike anticipation prior to the UK general election. I don't know yet what the results will bring, but I sure am tense about it. And so, it has been helpful to delve into an eensy bit of escapism. Video games do an alright job with taking one's mind off things, and today I am especially grateful for Robert Yang's Gay Western Game Jam. The jam took inspiration from a period of late-1800s American imperial expansion, but made it gay. All cowfolk are welcome here; all interpretations. What might The Old West look like if it were tweaked a bit? What new stories can be told about riding horses, or gay kissing, or the seemingly-endless American landscape?

Queer stories of reclamation and redemption are often about identity, and so there is a sort of power in queer stories about land, space, and the American west. The Gay Western Jam only just wrapped up, so these picks are fresh from the game jam mines.

is it that deep, bro? from moawling and cavegift, with music by Lydian Chord and bad_cartridge 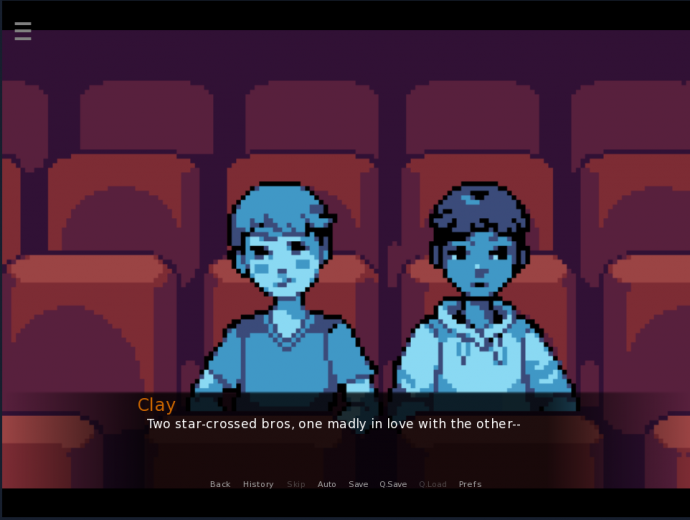 Yang wrote that the Gay Western jam's start date was to commemorate the U.S. release of Brokeback Mountain, and so it seems only fitting to include a game which centres around two guys going to see a gay cowboy romance film together. You and your friend shuffle into the cinema, but it seems that no one else has come to see the movie! You sit close next to your friend, wondering, "Yo, have my friend's eyes always been such a deep and beautiful blue before, bro?"

The game is of the narrative text-based sort, built with Ren'Py, and offers "several dialogue options to determine how the protagonist processes what’s around him. Certain events during the story will trigger mini-game sequences that will affect the protagonist’s perspective." The mini-games are sweet and fun, but I found the most joy in the whole framing of the thing. Sitting and watching two friends who are, in turn, watching a film lends a tinge of voyeurism to the game. It's one of the oldest tricks in the performance-and-film handbook, and it works here too. There's just something fun about watching people watch. 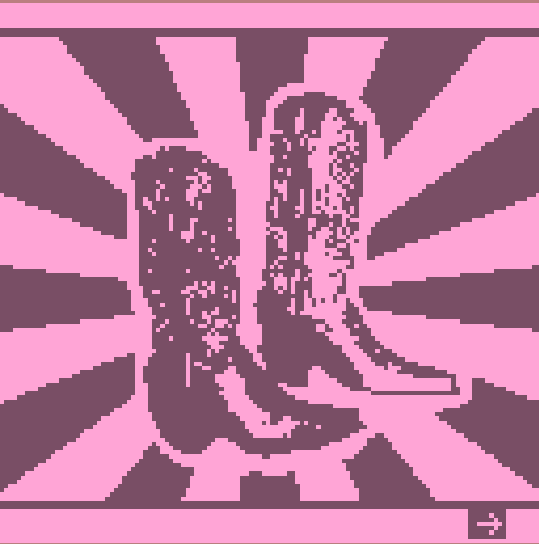 Cowgirl Boots is a Bitsy game that tells the story of a wrasslin' and sasslin' cowpoke couple who have been together for nigh on 40 years now. As one cowpoke waits for their partner to return, they reminisce on their past together and make the decision to come out to their partner. It's a beautiful little game, and thyfe does a remarkable job of telling a story about domesticity, love, and enduring partnership. There are sweet little touches scattered around your one-room house, like your partner Hattie's bedside books and your little dog, too. It helps that the monochrome pixel art slides are positively stunning. Cowgirl Boots only takes about five minutes to play, and it left me a bit emotional there at the end. I absolutely recommend that you give it a play.

Lookouts from ParanoidHawk and coldoggo, with music by Kevin MacLeod 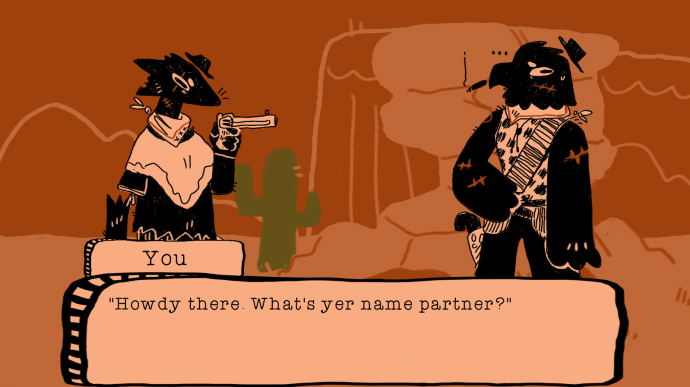 Lookouts tells the story of a pair of lookouts from rival cowboy gangs -- they have a fortuitous meeting atop a rocky outcrop, and come to understand that they have more in common than they might have thought. ParanoidHawk, Coldoggo, and Kevin McLeod have made an impactful visual novel vignette, painting a picture of the desire for camaraderie in the dusty west. The art is a real standout here -- some truly gorgeous renderings of spectacular creatures. Lookouts is a sweet tale of friendship, possibility for the future, and getting close when the night draws cold. 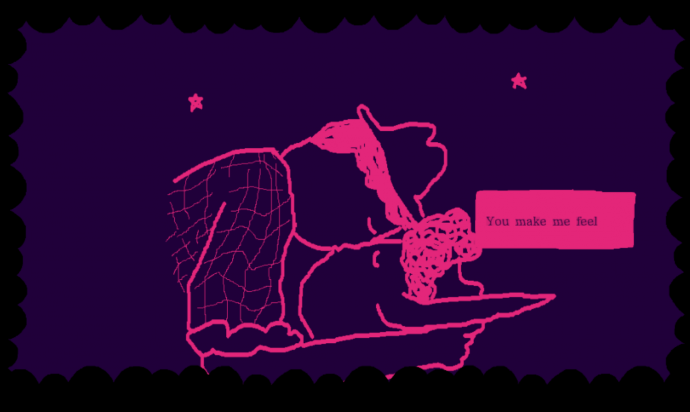 When I Was a Boycow is a beautiful, surrealist exploration of the relationship between a boycow (like a cowboy but different -- imagine horns) and their boyfriend (who ain't from around these parts). The game advertises itself as a "click-through" comic, though there are a handful of interactive elements that aren't beholden to "clicking through." The game tells five vignettes of their relationships, from cow rustin' to kissin' to space exploration.

(Note: Robert Yang does the occasional writing for RPS, though this piece came directly from my own keening to see/play/read gay westerns)