Luck, happenstance, pleasant coincidence and serendipity. Good fortune feels decidedly rare in 2019, what with a burning planet and all. There are days when I wake up on the right side of the bed, and my entire to-do list gets checked off -- and then some. Why does this happen on some days and not others? Who can say. Here is a collection of games I stumbled upon over the past week, by sheer chance. Some of them feature tales of success by cosmic intervention and some of them... don't. 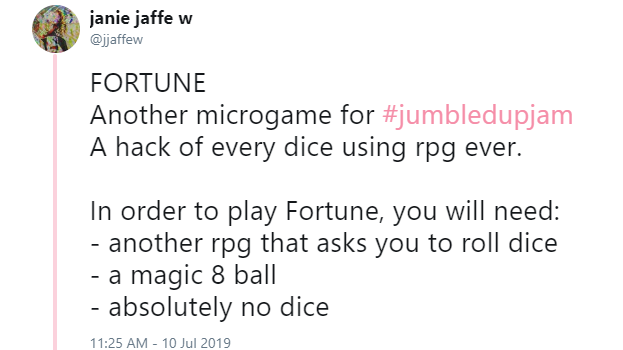 This game is a tweet, because this is my column and I am in charge. FORTUNE is "a micrograme for #jumbledupjam," a jam from the RPG Design Friends, where "the only rule is to make a game with a physical component that isn't dice or cards!" I love a jam like this -- it encourages folks to look at all the things around them with fresh eyes. What new affordances can be discovered? Where have games been lurking, unseen?

FORTUNE hacks an already existant TTRPG of your choosing. Any one of 'em. Pick one. Great. Now grab a magic 8 ball. Play that RPG as normal, until: "Whenever the RPG asks you to roll dice, instead roll the magic 8 ball. Read the ball's response out loud. Decide together what the ball's answer means for the game." I am always a fan of games with magical twists and collaborative collaging -- figuring out definitions and boundaries in play with others is a crucial element of TTRPGS. Throwing the dice out the window shakes the very foundation and contract of most of them, giving sudden credence to the indeterminate. Not that figuring out what a 5 means is entirely concrete. Signs point to...

"An herbalist awakens in a small, verdant world." Sold! I just repotted an orchid for the first time, which reminded me of playing MIMIO. Holding the plant's reaching, fragile roots is a delicate process; meditative and a little confusing. Am I doing it right? Am I experiencing 'peace' yet? Does this make me a gardener now?

MIMO is a short, experimental, minimalist game about an herbalist searching for four individual flowers. You are that herbalist, traversing the landscape for ingredients. This is where the game is, frankly, showing off: the environment is lush and beautifully lit. Asking for a narrative feels unnecessary. It is what it is, and it's a wonderful way to spend twenty minutes, even if you don't find everything you're looking for. It's all about the journey, right? Note that there's controller support (ooh!) though I didn't get a chance to experiment with it. 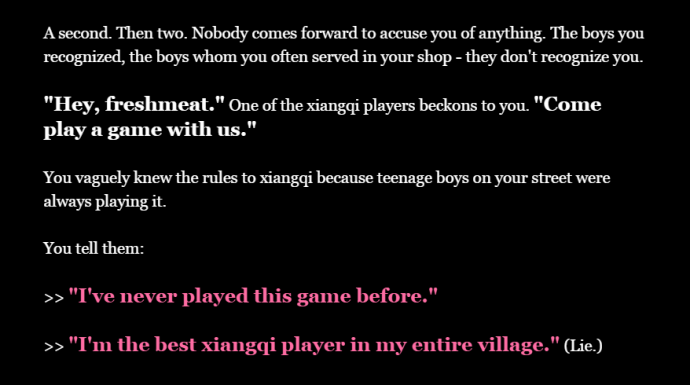 LIONKILLER is nothing short of brilliant. Almost every time I recommend a Twine game, I note the skill of the developer -- I've made games in Twine, usually relegated to one sitting. Otherwise, things get unwieldy. LIONKILLER is gloriously unwieldy, retelling the story of Mulan in gorgeous prose and clever interactions. The dev's itch page describes it as a "choice based game set in northern China during the First Opium War. Please the cosmos, cheat a Jesuit, and/or kiss a girl." My three favourite things!

Through a series of choices (sometimes ominously vague and almost always final), you navigate gender, bodies, language, war, abacus-based mathematics, nationalism, and queerness. Currently, there are only two parts, with a third in development -- releasing soon. 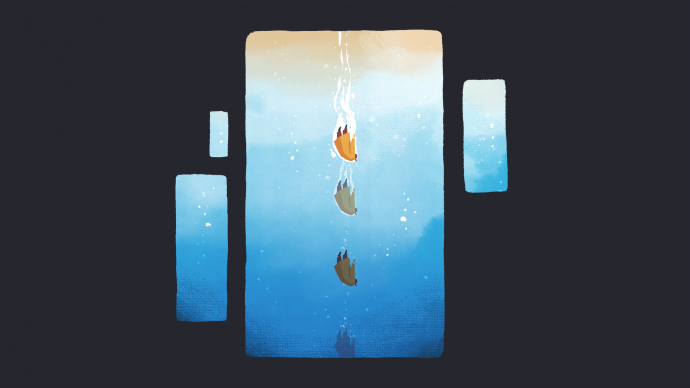 Gartman's Under What? is an evocative tail drowning in an attention to artistic detail. The minute I saw the thumbnail (to scale) for the game, I was hooked -- bait, line, and sinker. Visual novels remain a current trend in the indie stream, but few can boast the stylistic accomplishments Gartman shows here. The story follows a cast of an old fisherman and his fishy friends, a number of whom he feels he's seen before. It's a short play, with just the sole storyline, but sometimes that's what you need. If you're salmon who appreciates a silly deep-dive into a game chock full of puns and bad jokes, fish one gets my recommendation (with cod as my witness).

I was talking to a friend of mine the other day, when almost out of the blue they asked me, "Hey, remember the Mystic Western Game Jam?" At first, no. "When was it?" "2016." "Uh." Actually, yes. The Mystic Western Game Jam was hosted by Juegos Rancheros in 2016, delivering on a theme of all things Mystic and Western and Inspired By That Great Vast Desert. I stayed up late with a friend who was working on a submission for the jam way back then. I was lending them my ukulele. It was 2016. A simpler time.

So here I am again, looking at the Mystic Western Game Jam, now living in the (arguably) Mystic West, evangelising on behalf of Turnfollow. I've said it before, and I'll say it again: they're making the best games in the indie-sphere these days. River Bones is short -- an eerie ride down the river for an inexplicable (out-of-order) reason. Saying anything further might spoil the story, so I'll have to stick with saying that the music is fantastic and the shift in animation styles is stark and striking in equal measure. Turnfollow have made a lot of games in the intervening three years, but it can be nice to revisit things when they fall into your lap.