Greetings, all! It's the end of August, and so, these dog days are over. The temperatures might remain warm well into September, but do not be fooled: autumn is on its way.

It has been one year since I started writing Priceless Play, carrying the baton for Free Games of the Week. I love it! Bringing you weird writing on weird games week after week is a joy. So I hope you'll indulge me for the next month as I take a brief step back. The break isn't a glamourous drinks-in-a-coconut-with-tiny-umbrella variety, but rather a break to devote time to writing my comprehensive exams. Who said getting a PhD wasn't glamourous? Everyone? C'est la vie!

Here are a handful of games to tide you over. Wish me luck!

Stones of Solace, from Dziff, Armel Gibson, and Jason Sutherland as part of Ice Water Games 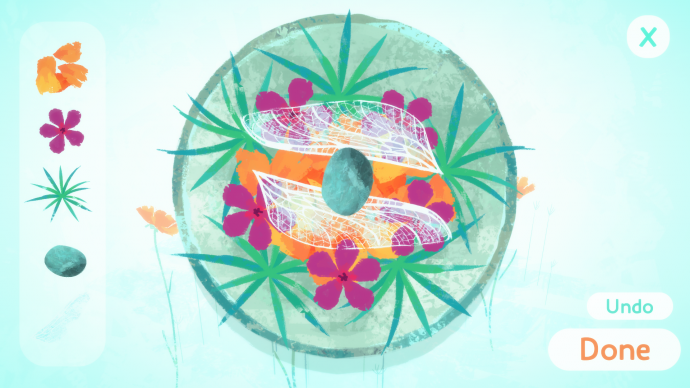 Stones of Solace is "a minimalistic and contemplative ritual, offering you a quiet space for relaxation." The game is brief -- only minutes if you want it. But, of course, you could spend hours with it if you wanted. Ice Water Games is no stranger to compact, contemplative games. I'm a big fan of the label's previous games, like Viridi and Fire Place. Stones of Solace is no exception.

In Stones of Solace, you are presented with a shrine for an animal for whom you arrange a small bouquet of objects. Rocks, seashells, leaves, flowers. The particular animal changes every day, which means you can check in daily to see which small creature might bestow its blessings. It's a calming way to start the day -- or simply take a minute's break.

A Dance, A Duel from Kale Organa 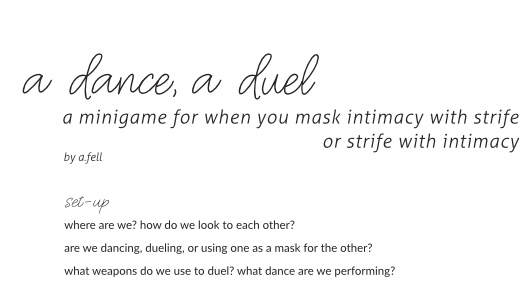 A Dance, A Duel is a GMless RPG -- or a role-playing game you can play without anyone calling the shots for you (and the group of five friends you can only get together when your schedules align, like the planets). I'm a big fan of these (probably harkening back to my days poring over Yoko Ono's Grapefruit, a book of art pieces as instructions), and I think this one is particularly clever.

A Dance, A Duel is a modification of Firebrands, by D. Vincent Baker. The premise is that you and another player are either dancing or dealing, and you must answer a series of questions about what that dance (or duel) looks like. Each question is worded cleverly enough so as to apply to either situation, calling out the similarities between them.

Everything is Going to be Okay by Nathalie Lawhead

I've said it before, and I'll say it again: Nathalie Lawhead is doing some of the most exciting work in games. EIGTBO has been covered by RPS before, but never by me! And if you haven't played the game yet, you're in for a treat. Have you been meaning to play for a while, but putting it off? No time like the present!

Lawhead describes EIGTBO as a zine, and I'd describe it as a gorgeous assault on the senses. Lawhead has written extensively about the game -- both in the accompanying artist's statement, as well as in their DevLogs. The game's title is its mantra: "Everything is going to be okay." But whether it is a reminder or a mockery is... unclear. The game is also about pain and power. Hidden within the game's many pages and interactions are essays and conversations musing on whether everything really will be okay. As Lawhead says in their artist's statement: "Surviving is one thing, but living with it is an entirely different fright, and I think this is where examples of real strength are."

36 Apples is a "first-person puzzle adventure game," where your goal is to collect apples. 36 of them, preferably. Separate from its meditative goal of apple-picking, 36 Apples is beautiful to look at and beautiful to run around in. I'm sure there's a way to collect all 36 apples, but I never really got around to it -- more content to eat them and throw stones into a lake.

I don't remember friendly neighbourhood apple-picking being as idyllic as this -- mostly the smell of rotten apples underfoot, climbing ladder after ladder, and getting sunburnt and cold. I'd give anything to wander off into the deep blue abyss, though.

15 wishes for the universe from khianavy

15 wishes for the universe is a small brick-breaker game about losing someone, and thinking about them. The game was made for the MojikenCamp Internship Program for Mojiken Studio, and completed in ten days. It's a short game -- depending on how good you are a brick-breakers (I'm terrible at them). The game has great polish for its brief development period, and I love the way it pairs brick-breaking with a series of meaningful messages about loss. I mean, if you think about it, the little orb being sent back and forth between the brick and the paddle is a great representation for this idea of loss: always going between places, and never settling. How poetic!

And now, appropriately, I must go away for a little while. Four weeks! Alack! Alas! I must bury my head in the Writing Sands of Doctoral Ambition! See you soon, my Priceless Pals.