Year after year, there are many hallmarks which signal the nearing holidays (aside from the shortening daylight hours and the date on the calendar). Snowy romantic comedies on TV. Office cookie swaps. Mulled wine, Christmas markets, my friends' annual Hannukah donut party, and an increasing sense of obligation to return to my parents' house to see family. There aren't many games I'd be quick to call "Christmassy," and perhaps I'm an eensy bit cynical about the mainstream market rhythms which bring out the gangbuster games in Q4. There are, however, plenty of little games which do a bang-up job of spreading those ubiquitous holiday vibes, like snow and love and good cheer.

Here are some games which might help to get you in the spirit.

Growing up, my house was firmly a Tony Hawk Pro-Skater household. My neighbour Mary's, on the other hand, was a Shaun Palmer Pro Snowboarder household. They were from the same school of thought (man on board does some sick ollies, early 2000s punk rock music plays in the background), but Shaun Palmer was definitely a winter game, whereas Tony Hawk was for the rest of the year. I don't make the rules. So, I'd trundle on over to Mary's house when school was called off for snow, and we'd sit in her basement and pretend to snowboard. Later, we'd graduate to real snowboards and I snowboarded right into a tree.

Fred Souchu's SNOW! brings me back to those chilly days in my neighbour's basement, pretending I could snowboard. Except instead of snowboarding it's skiing and instead of the soft pixelated cushion of PS2-era snow textures, it's PICO-8. The music absolutely slaps, and it's a joyful cruise down the slopes collecting flags and coins and trying to avoid careening into hapless, helpless reindeer. 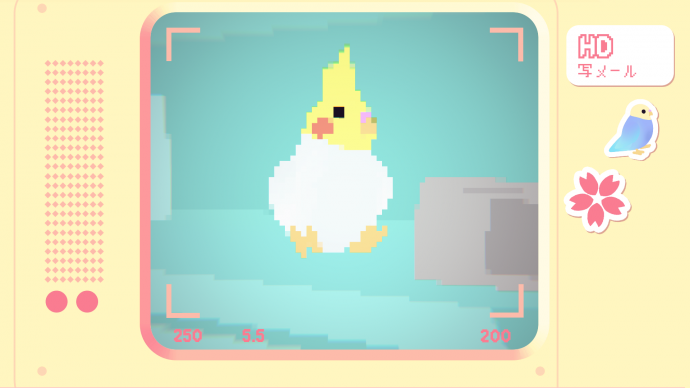 You know what they say: "Gone away is the bluebird, here to stay is the new bird." In Toripon, you can collect photographs of many many new birds as they slowly and cheerily pile up in your pixelated flat. Toripon doesn't ask much of you: wander around, look for little bird-shaped blocks in desk drawers and bathtubs, take pictures of them. As you take pictures of birds, the pics are posted to an in-game Bird Site where you gain followers and comments from other bird enthusiasts. The more pics you post, the more birds you unlock. The game is short and sweet, and is sure to tickle many-a-gamer who misses the dulcet honks of bird-centric video games.

If you're yearning for more RPS-bird content, Alice O wrote about the game earlier this year here.

The Midnight Bakery from Sarah Carter

It is important to bake things during the holidays. Not only does a roaring hot oven keep the house warm, but batch baking cookies and cakes and biscuits and other assorted goods/sweets are an easy way to give gifts to friends and family, or impress the folks at the office. It should surprise absolutely no one that I am an advocate for holiday baking. In The Midnight Bakery, you are taking over the neighbourhood bakery for your aunt, who has gone away for the evening. Of course, the neighbourhood this bakery caters to is fulls of vampires, witches, and ghosts. So it falls to you to bake accordingly! Does a ghost want a ghost cake or a cake shaped like a ghost? Will Dracula want blood in his swiss roll, or the more traditional raspberry jam? And, perhaps most importantly, can you use baked goods to save the world?

Working at a university keeps me to the rhythms of university calendars, and sometimes it feels like the endless patterns of classes and books and students and grading papers goes on and on forever. Even as winter break looms, I can't quite escape the feeling of being trapped in my own endless library. Try as I may to lose myself in a book, nestled up in an armchair whilst snow soundlessly drifts just outside the window, I've got edits and reviewer comments and student evaluations to tend to... And so, Sophie Houlden's Endless Library resonates with me.

Sophie Houlden is an indie games mainstay, behind games like BANG BANG BANG and, more recently, the dice-rolling assistant Sophie's Dice. In Endless Library, they take on a procedural library which goes on forever, endlessly populating magical books and their titles. Like many small procgen game projects, the seams behind the naming conventions become more and more visible as the game goes on. Personally, this is my favourite part of any procedurally generated game. It's like trying to find the loop in a GIF, or working out whether or not the voices on the radio are live or not. Getting an insight into how a game gets made gives it a dash more magic, in my book.

Your family's house is haunted.