Apologies. I may have misinterpreted and thus misrepresented the marketplace skirmish. It's possible that the enemy anti-tankist on the roof at redg44 has no beef whatsoever with Stone's snipers. He may just have a thing against hotels. He's certainly eccentric. Having used up all his RPG-29 rockets in attacks on the Lux, the lightly wounded hotelaphobe unholsters his pistol and begins blazing away with that. Amazingly, the fusillade holes flesh as well as masonry. Stone and his two assistants are fatally plugged by the quixotic Qatabi!

Just kidding. When a pillock with a popgun takes on three highly trained, in cover Marine marksmen at 70 metres, there's only ever going to be one result.

To weightier matters. By the time Chally hauls her chunky chassis onto the V highway, Willy the Wiesel has abandoned it, bound for South Beach and a rendezvous with the rambling Landy Boys.

In its haste, the German AFV stirs up a substantial dust cloud which makes the job of the British tank harder than it might have been. Peering northward through the swirling murk, the Chally gunner makes out what looks like the beige bulk of the T-62 and reacts accordingly. A 120mm HESH round follows streamers of scarlet 7.62mm tracer up the road. The shell misses, striking the pavement alongside the target rather than the target itself, yet gets the job done. Men begin spilling from the kiboshed...

...IFV? The vanquished vehicle is actually a BMP-2 not the survivor of turn 2's LAW flurry. Bonham and his gunner can see no T-62.

Meanwhile, fifty metres away to the SW, the Scimitar is preparing to dispatch a sniper, one of the last vestiges of Park Force, when it's beaten to the punch by a man with an MGL. Recently arrived at w57, Daly's squad is making its presence felt.

The machinegunners of 4th Squad's A Team locate another remnant of Park Force when they bundle into the Ditch o' Doom towards the end of the turn. Cowering close to his mangled comrade, it's the man who carried the munition that ripped apart Deathproof. Unless he surrenders smartish, his chances of seeing Turn 8 look slim.

The glitter of sunlight on ruffled brine and the soft tattoo of surf lazily headbutting barnacled rocks, might have distracted troops less professional than the Landy Boys. Thankfully, the three Brits tramping towards South Beach are fully alert when the submachine guns protruding from the window of the house at redo79 jerk into life. Having hit the dirt, the assailees are weighing up their options when fire support arrives in the form of a dinky Deutsch tank destroyer. 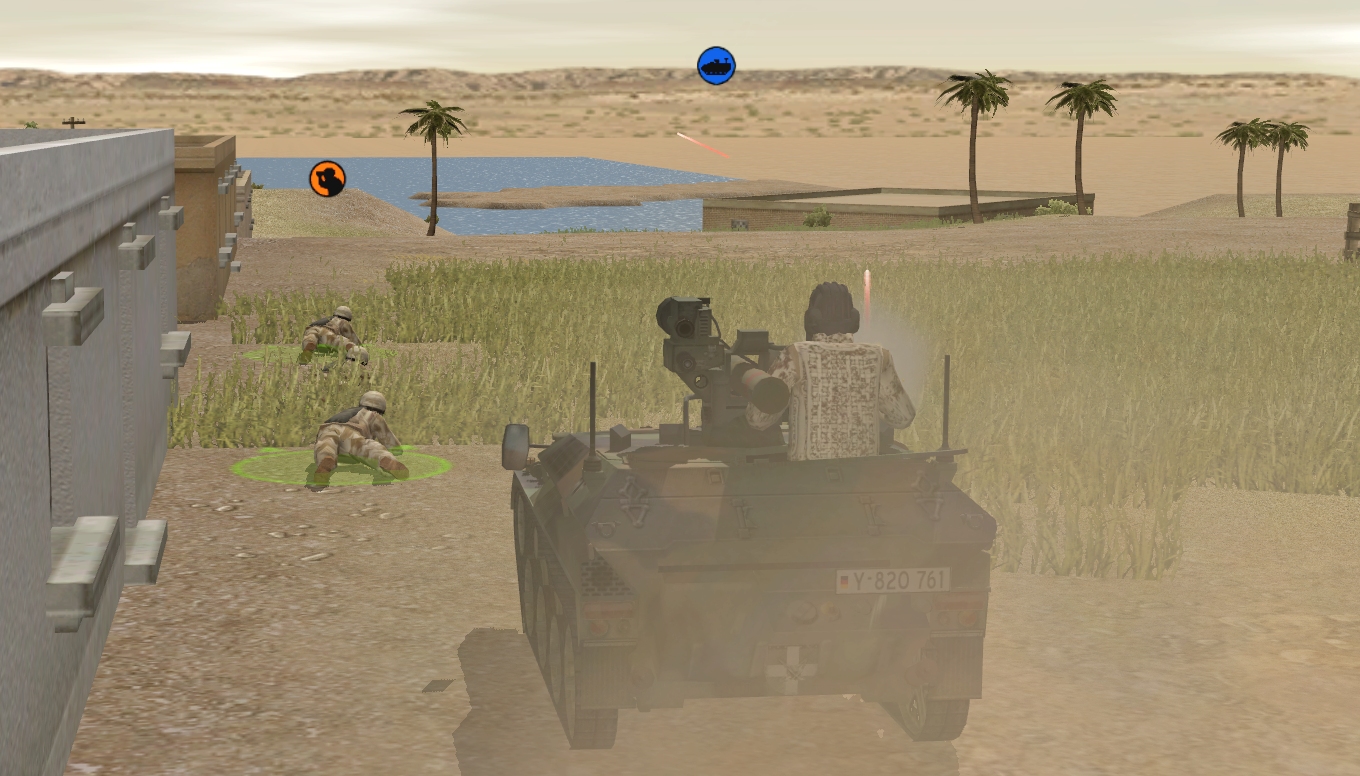 A few bursts from Willy's MG-3 silences the beachhouse inhabitants and for twenty seconds all is quiet. Then, with a few seconds left on the clock, the Qatabis restart the rumble. With bullets pecking at Willy's armour and appendages, the German machinegunner decides that he's had enough and hurriedly buttons up. 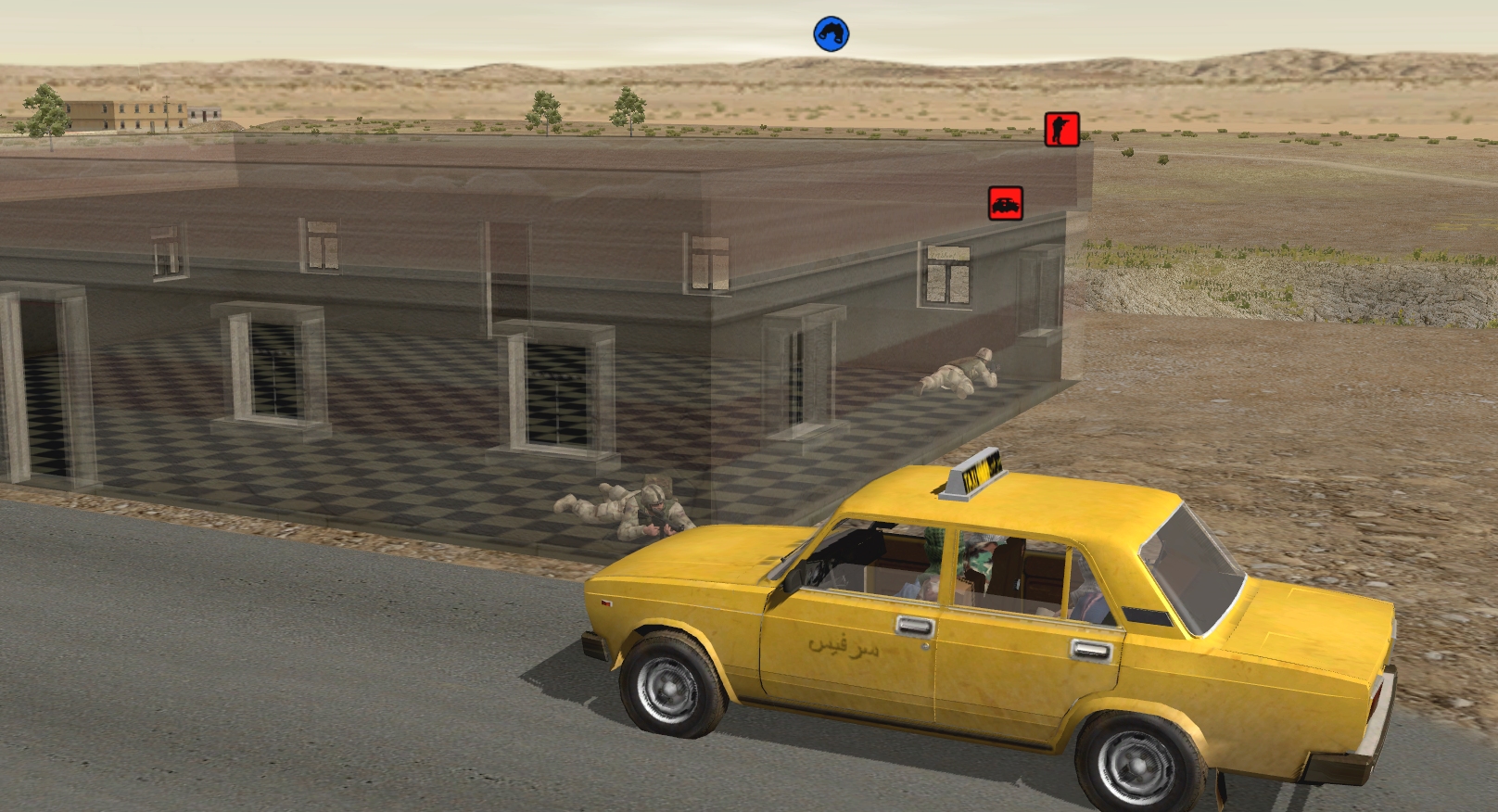 Unwittingly, the Dutchmen seem to have chosen Al Rayman's equivalent of Piccadilly Circus as a resting place. Still edgy after close encounters with a truck and technical, halfway through the action phase they hear another vehicle approaching from the south. A laden taxi lurches to a halt outside their bolthole and for a horrible moment it looks they're about to have visitors. 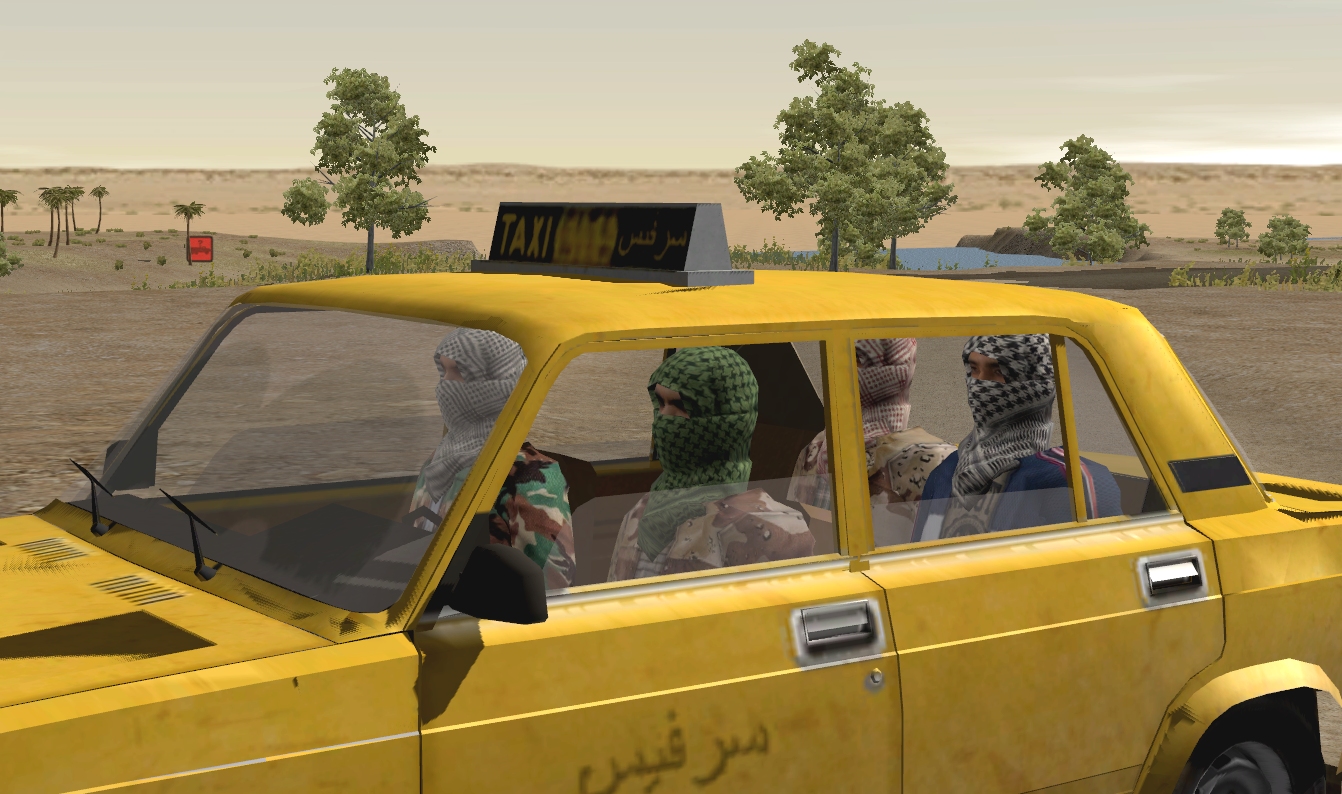 But no. Through the open window heated debate is clearly audible. Then the cab starts backing up. Have the passengers – a shady-looking trio nursing modernized Kalashnikovs – decided to occupy the lighthouse rather than head west? 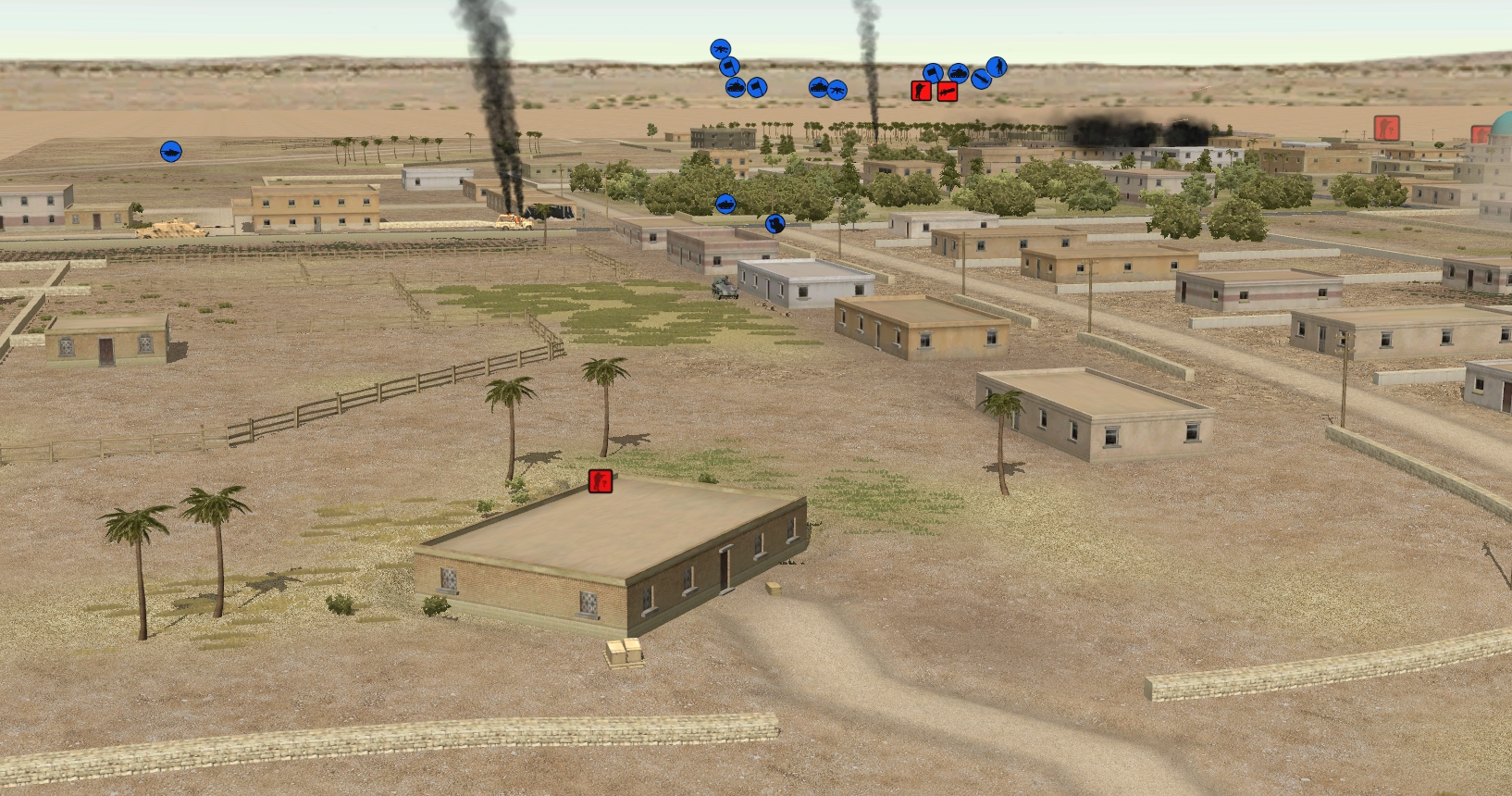 ^ The situation at South Beach

^ The Chally surveys its handiwork

^ Park Force looks to be neutralised (the AT assistant is cowering and under fire. The other red icon represents one wounded AK-47 user) 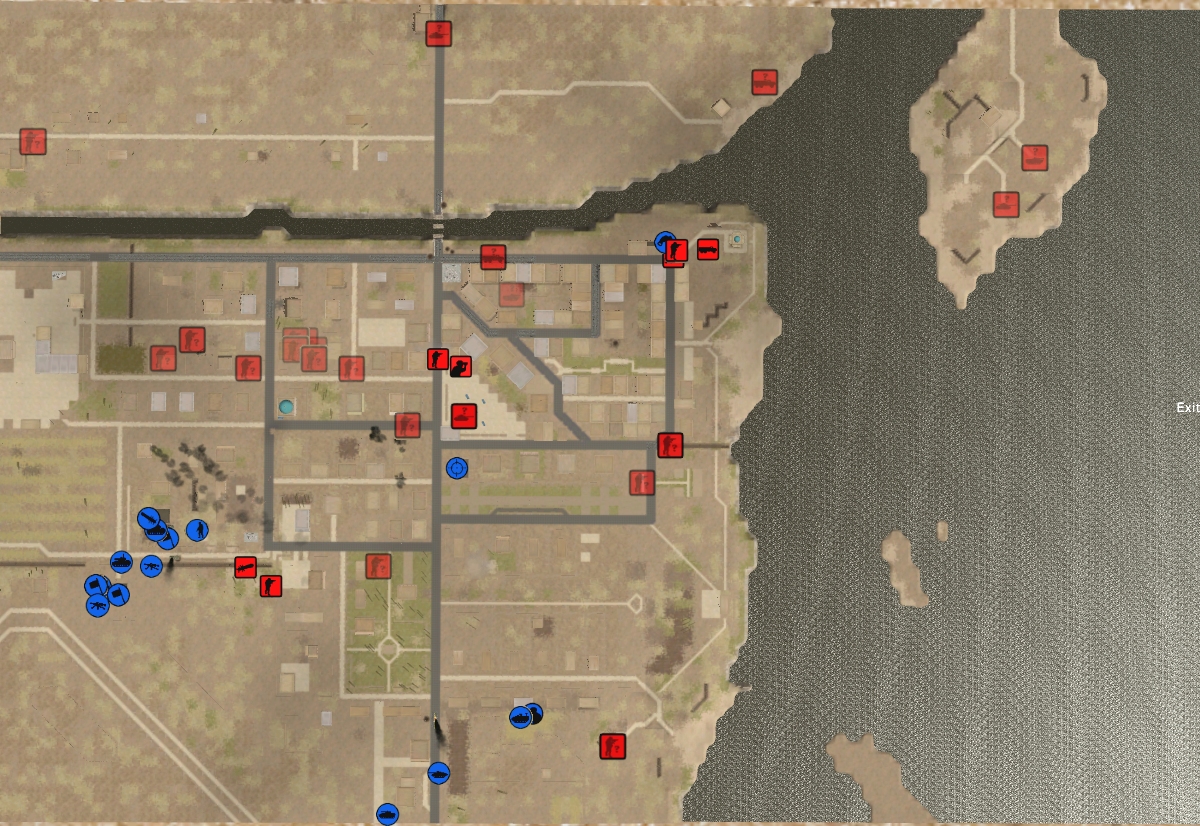