The other week, I got my y-fronts in a bunch about how some clever fella had added raytracing to Quake II. A 22-year-old first-person shooter had effectively beaten everyone else to the punch when it came to the new*, more naturalistic form of game lighting currently only available (at least without calamitous performance) on the most recent RTX cards. (You can do it a bit, sort of, in Battlefield V, but that's it for now).

But I couldn't play the bally thing, as I didn't have an RTX graphics card. Now I do, for a bit, so I've been back to give 1997's old Stroggs a 2019 paint job. Here's a spot of compare and contrast, and quick thoughts on whether or not it was worth it.

I'll start with a video, as screenshots don't really sell how the new lighting system looks in motion, as characters move around and shadows shift over them, as lights work like lights rather than brightly-coloured spots, as dark corners are as black as that Dr Oetker pizza you left in the oven for three hours by mistake that one time.

It's nice, in short. Not slap-me-round-the-face-and-call-me-Nigel startling, which is as much to do with it being Quake II, always the worst-looking of all the id Quakes, underneath it as anything else, but there's a ton of atmosphere, particularly as enemies burst from the gloom. I'm especially struck, though, by the shadowing on the spinning gun at approx 16 seconds in. You didn't get that on a Voodoo 2.

Here's the before and after, in case your mind is playing tricks. OG Quake II on the left, ray-traced Quake II (in the Q2Pro client) on the right. Click for fullscreen.

The obvious thing to say it that, though the lighting's all fancy, something of the original, beyond-murky aesthetic is clearly lost. Because lights actually cast light, as opposed to offering all the illumination of a pound-shop keyring torch, the whole scene is far brighter and more colourful. The sinister, glowering quality is diminished, at least in scenes like that - for instance, a lot of the light there comes from the sky.

The flispside of that is that when a scene has minimal light sources in it, the sense of depth and distant darkness is pretty dang glorious: 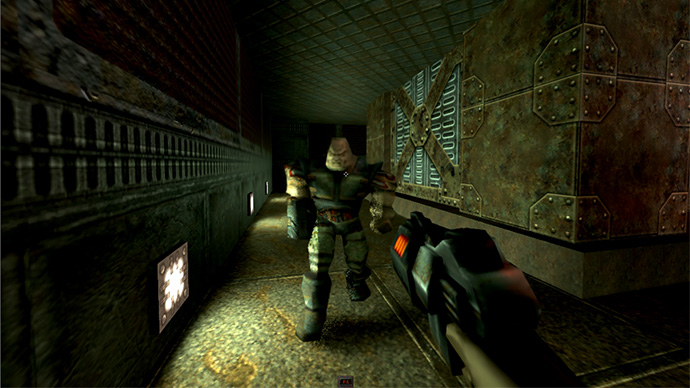 Furthermore, explosions are an absolute delight, lighting up the whole place like nobody's business. Here's before... 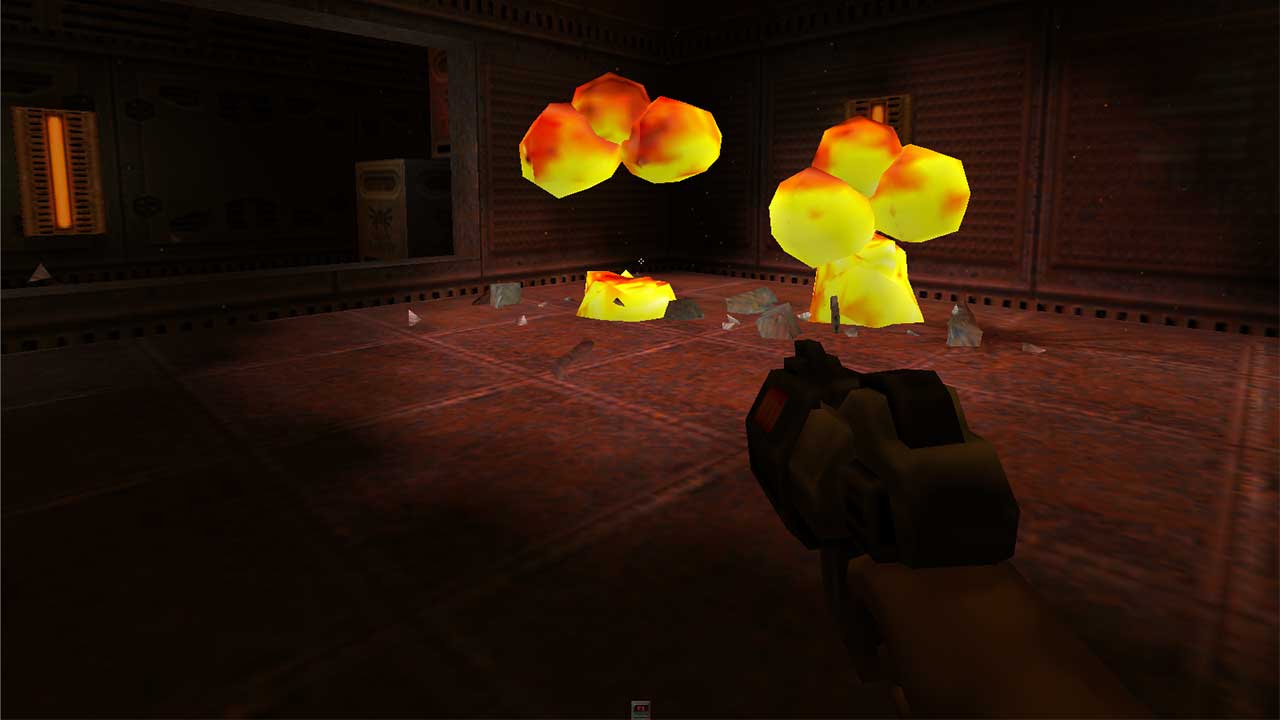 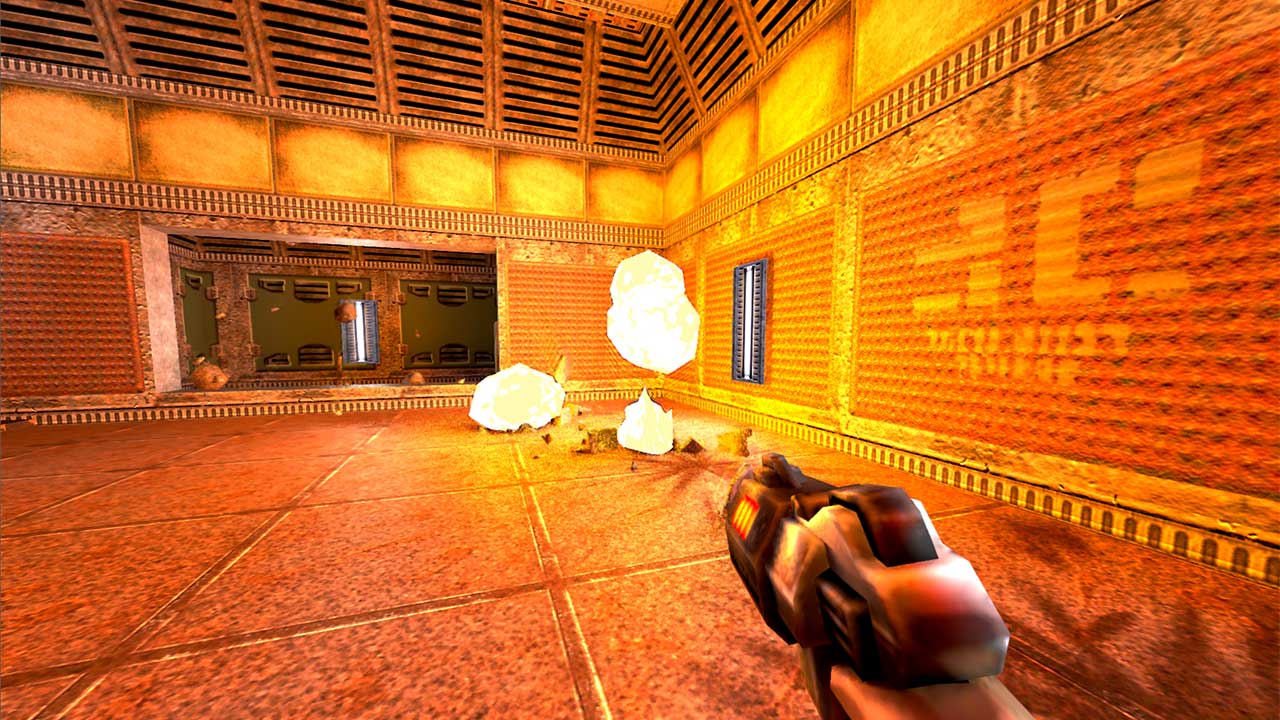 Performance isn't too bad. I'm running it on an Nvidia GeForce RTX 2080 card at 1440p and 30 frames is more common than 60 frames, but it's more than playable (less so at 4K, for what it's worth). Even so, the idea of a 22-year-old game making a £700 graphics card strain like this would be funny if it wasn't so disturbing.

The real sting in the tail is that Christoph Schied's path-traced Quake II mod depends on real-time noise-filtering to look as good as it does. Without that, you get a spotty mess, the consequence of thousands of different light-rays 'painting' the scene, as seen in earlier attempts at this sort of thing here. Sometimes, that filtering blips out for a moment, and so I'm irregularly seeing frames like this: 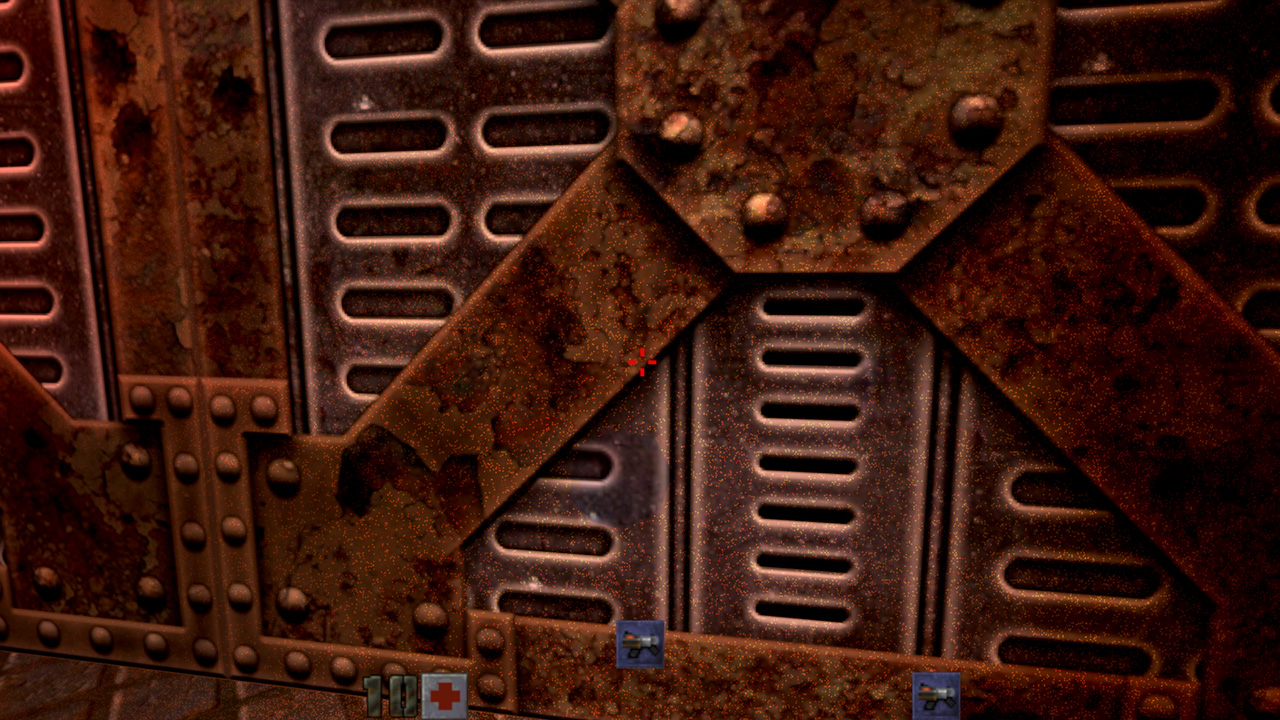 Only once in a while though, and only when very close to another object. I can live with it, given how good everything else looks. Obviously, I'm keen to see this happen in prettier, more recent games, though whether current hardware can truly keep up is a bit of an open question until more ray-traced stuff gets released.

*(Ray-tracing as a tech has been around for years, but as something we can do in games on home computers in decently-performing real-time, it's only really kicking off right about now - and even then only in a limited capacity.)