Saddle up cowpokes, because Red Dead Redemption 2 rides out on PC at 1pm UK time today (5am PST). I must admit, I let out a big sigh of relief when I saw Rockstar's PC requirements for Red Dead 2 the other week, as their recommended graphics card topped out at just a 6GB GTX 1060. Easy, I thought. However, Nvidia have just published their own list of recommended graphics cards for hitting that all important 60fps in Rockstar's spruced up cowboy game, and all I can say is YIKES. 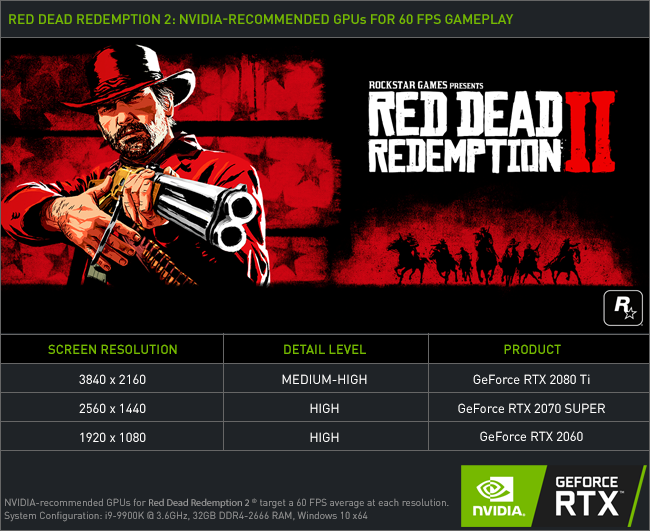 Admittedly, Nvidia do state that an RTX 2060 is "ideal for 60+fps 1920x1080 gameplay", so there's a good chance you'll still be able to get around 60fps with a less powerful card at 1080p depending on how fussed you are about hovering somewhere in the mid-50s as opposed to always being over the 60fps line.

The same goes for the RTX 2070 Super as well. That's their recommended graphics card for "delivering over 60fps on High" in the game's built-in benchmark, so here's hoping we'll still be able to get near 60fps on something less expensive.

I will, of course, be doing my own performance analysis of Red Dead Redemption 2 very soon (codes were not sent out before release, so I'll be beavering away on it this afternoon just like the rest of you once it unlocks at 3pm UK time), telling you exactly what you can expect from all of today's best graphics cards, as well as what kind of performance you can expect from Rockstar's recommended PC requirements. After all, Rockstar made a big point in their initial PC enhancements post about how it's been specifically developed to run on a wide range of systems, so it would be a shame if lower-end cards weren't able to hit a stable frame rate.