With his final breath, I like to think that Resident Evil 2’s Robert Kendo cursed the lying huckster that installed his double glazing. ReMakesident Evil 2, clearly conscious of besmirching the good name of glass salesman the world over, fleshed out Kendo’s story into one of its most human scenes, but still left a haunting question mark hovering over the fate of him and his daughter, Emma.

“No Time to Mourn”, the second of Ghost Survivor’s four survival trials framed as “What if?” scenarios, begins with a monochrome projector slide of Kendo holding a shotgun underneath his chin, the apparently lifeless body of Emma beside him. We all know what ‘lifeless’ means in Raccoon City, though, and the implication here is heartbreaking. Kendo’s final act is to provide one last, trouble-free packed lunch for soon-to-be-zombified Emma. It’s touching, in the gnarliest way imaginable. It’s also about the closest this free DLC really gets to any additional insight into the game’s characters.

I’m completely fine with that, as it goes. Fifty-six hours. That’s how long Steam reckons I’ve put into Resident Evil 2. I’ve watched each cutscene maybe twice. It’s a good survival horror game. It’s not as good as Dead Space or the remake of the first Resident Evil, but it’s still good. It is, however, an absolutely corking horror-themed obstacle course, designed from the ground-up for speedrunners, and that’s the game I’ve sunk so much time into. 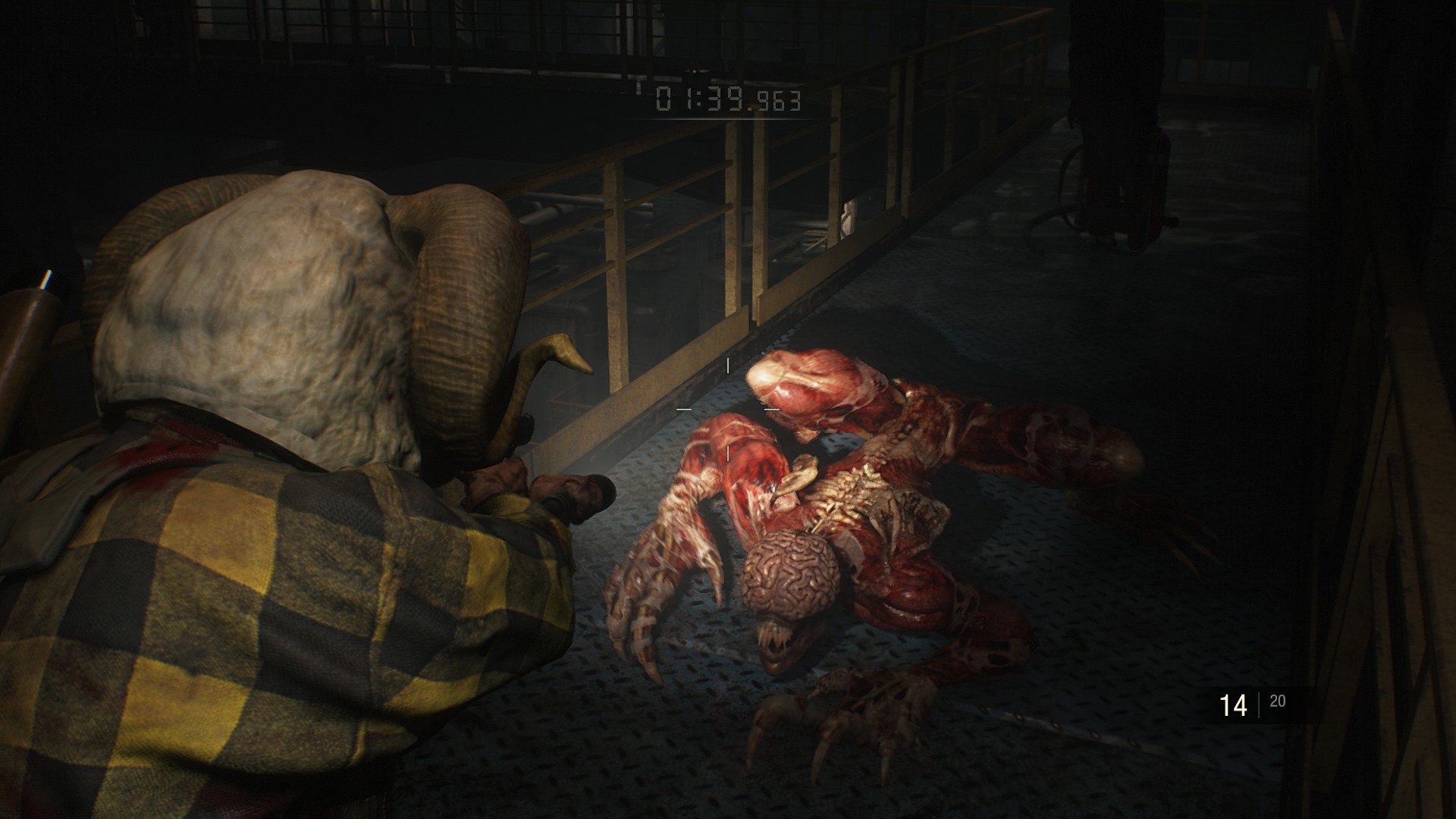 Ghost Survivors is a distillation of the remake's underlying arcade sensibilities. The blood curdling screech of Licker can still shit you up a good’un, but this time it's because it threatens to mess with your perfect run, rather than your sanity. The ammo scarcity that allowed us to feel Claire and Leon’s doomed desperation in the story here contributes to puzzles more interesting than anything in the main game, guiding you to mentally map necessary kills and work out exactly how much mileage you can extract from a single bullet. 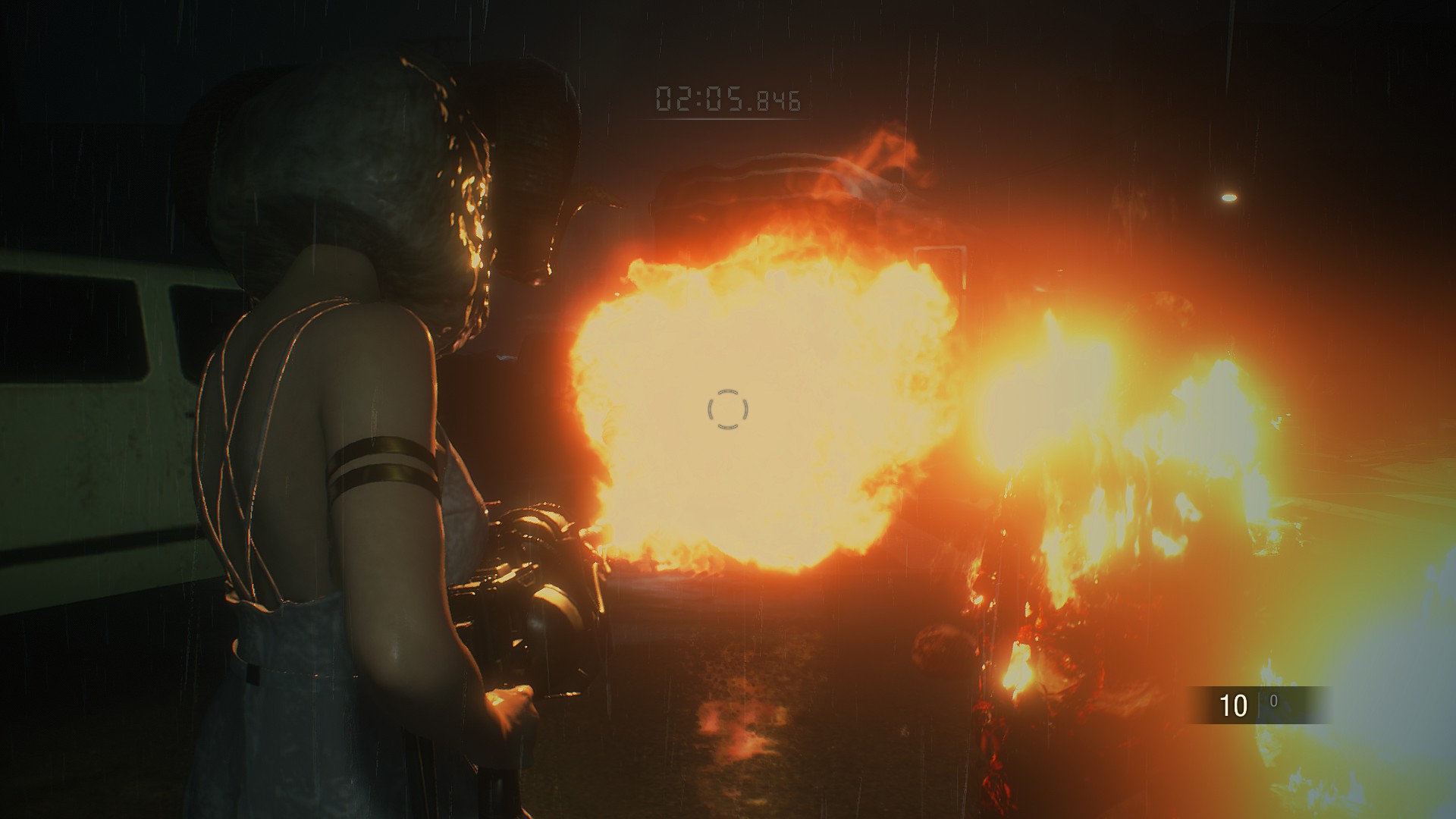 Ghost Survivors builds on the format The 4th Survivor mode showcased with a few additions. Firstly, there’s supply-dispensing bubblegum machines scattered throughout the maps. Immediately, you’ve got a couple of additional decisions to make. Which of the three items do you go for? Can’t you have all three? No, you greedy vagrant. Pick one and piss off. Do you even bother with the machines in the first place, which are often in inconvenient locations and sure to pile more seconds on to your run time? On top of this, certain zombos carry item-containing backpacks, and you’ll have to stagger or kill them to get what’s inside. None of this shakes up the formula too drastically, but they work well here. 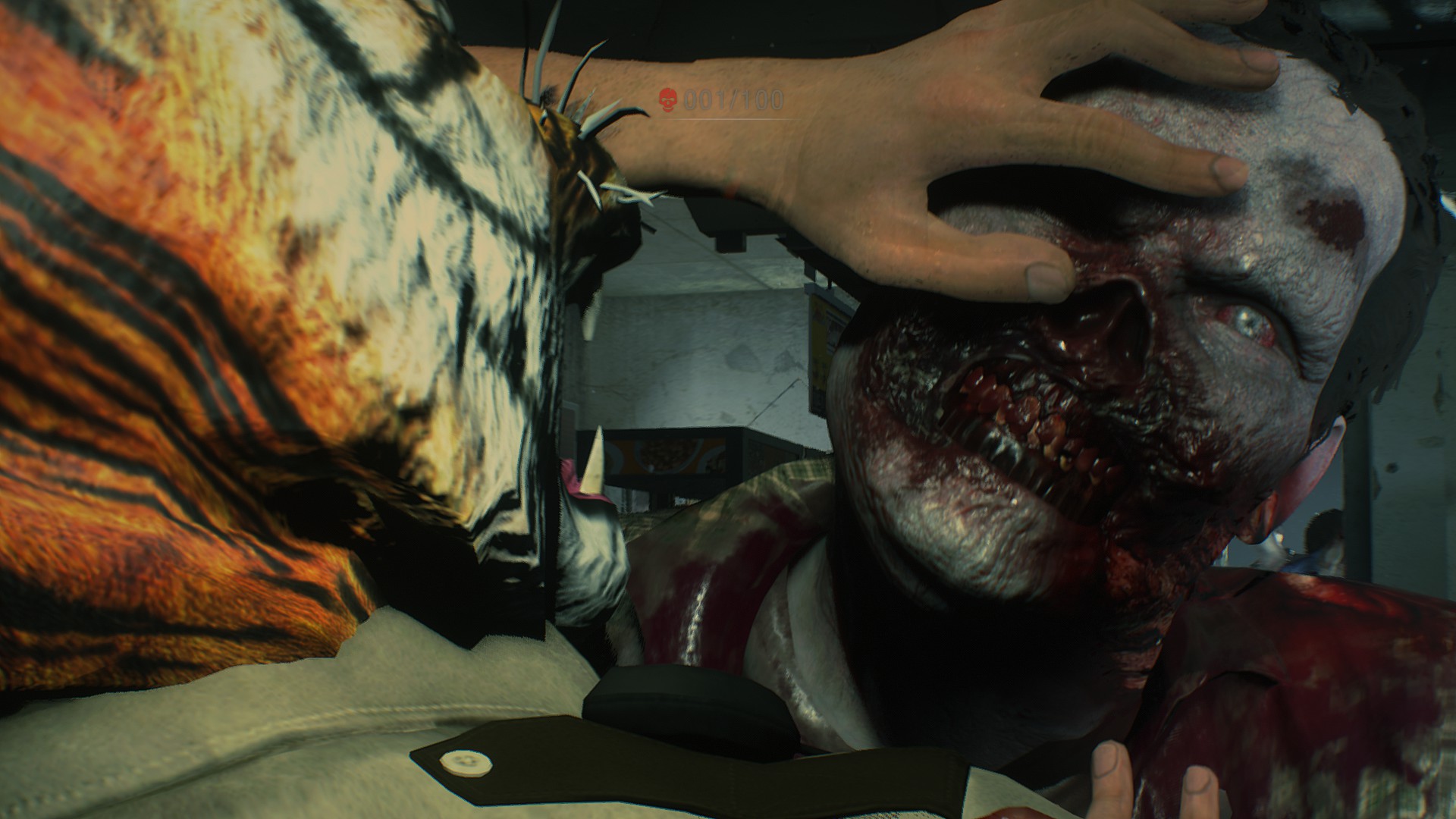 Each of the first three scenarios also introduces a new type of zombo. There’s ultra tough guys that look a bit like ol’ eyeball palms from Pan’s Labyrinth in the first scenario, poison gas lads in the second, and triple bastard riot gear zombies in the third. The first type is still as vulnerable to knee shots, so they don’t make that much difference, but the other two seem specifically designed to mess with tried and true speedrunning tactics. Again, it gives the impression Capcom have very deliberately baked these weak spots into the original, and are now having lots of fun subverting their own formula.

Once you’ve finished the third and most fiendish of the scenarios, you’ll unlock a forth that takes place solely in the gas station we saw during the main game’s introduction. Rather than tasking you with navigating a gory gauntlet to a set exit point, “No Way Out” gives you an infinite ammo pistol, a herb and a single flash grenade, and tells you to kill a hundred shamblers. The rabble that sporadically burst through the gas station’s three entrance points include the special types before, and the backpack zombies. One of these dropped a rocket launcher for me at one point. There might be other cool stuff too once you get past fifty-five kills, but that’s my current record because it’s balls hard. It’s not quite the Mercenaries mode I was hoping for, but it does do a fair job of translating that concept into Resi 2’s more measured, less roundhouse-y combat. 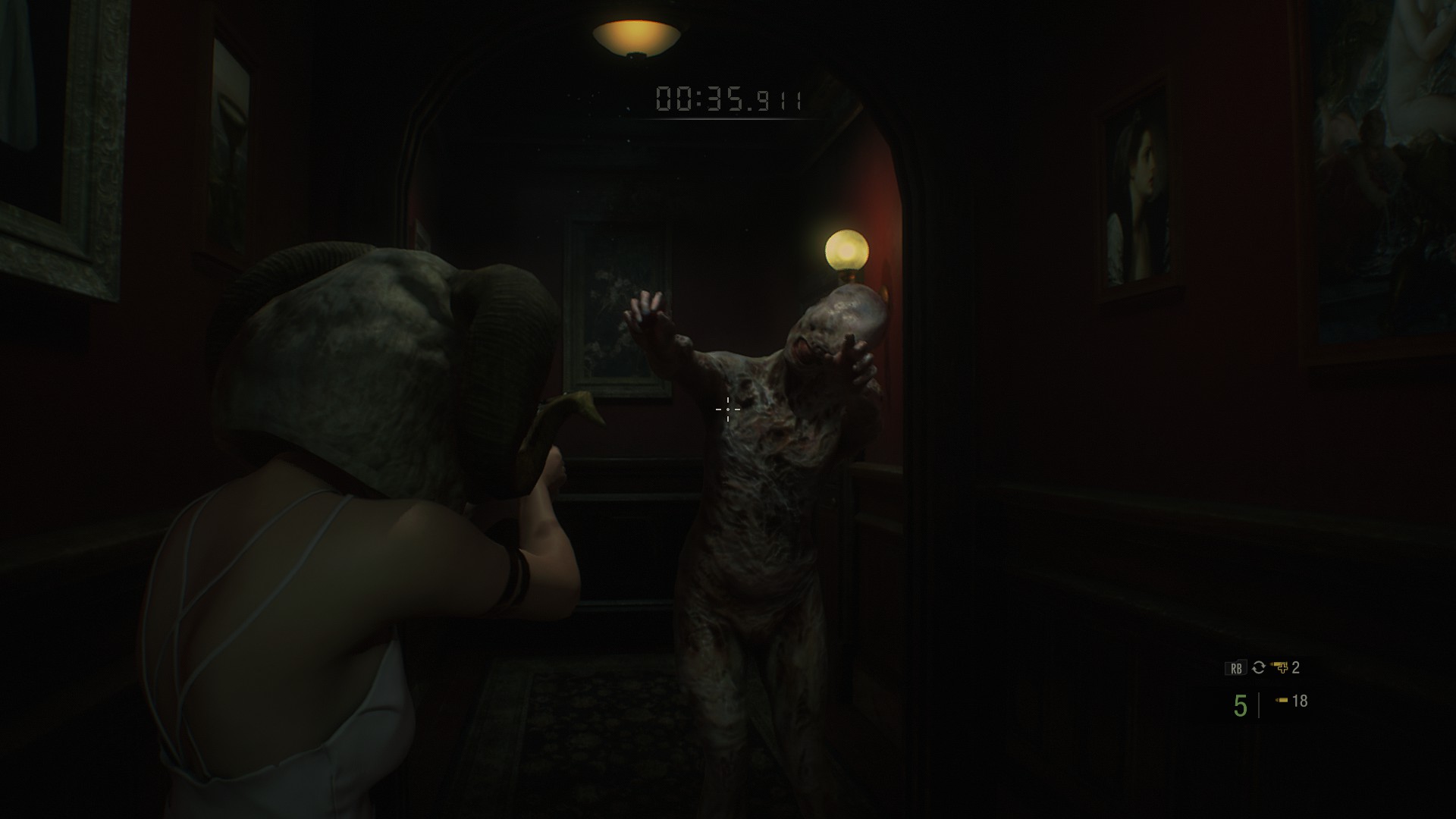 Goofy unlockables? You betcha. There’s something uniquely enjoyable about evading hungry corpses whilst wearing a sheep’s mask. What’s great is that these fun accessories provide a useful function too. If, like me, you find it difficult to turn off the part of your brain that engages with a game’s atmosphere and treat it as a purely mechanical experience, the masks do a good job of deflating the spooks. It’s a bit like turning the sound down on a Bloodborne boss so the operatic doom chorus doesn’t make you fumble your dodge rolls, which I condemn wholeheartedly but recognise as a useful comparison. 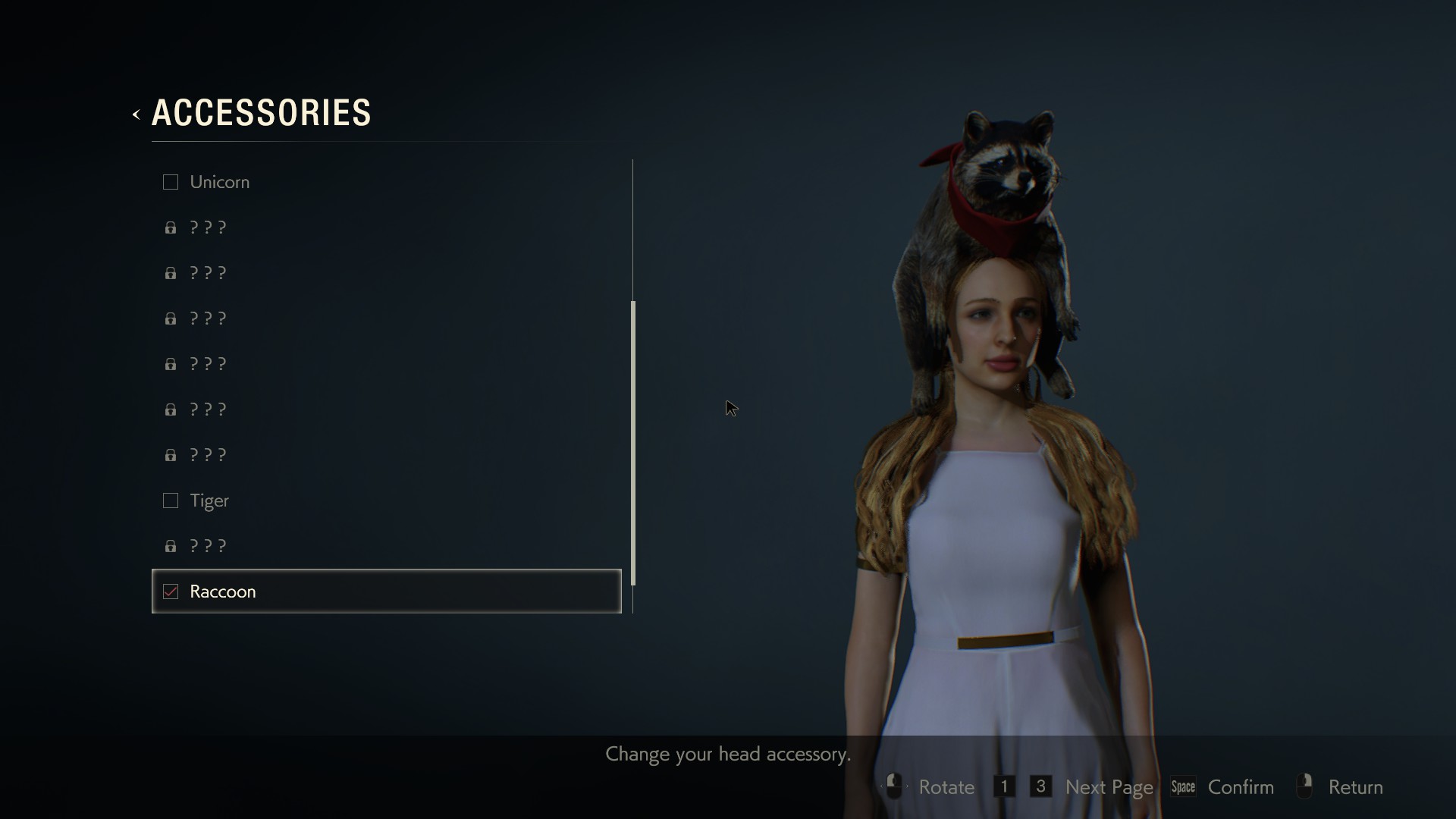 So, is the DLC good? Who cares, it’s free. But yes, it’s also good. Between this and Monster Hunter: World, I’m a huge fan of the way Capcom have been supporting their games lately. Resident Evil 2, especially, is not just a celebration of the original, but a call back to the way I used to engage with games when I could only afford one or two at a time because I was an unemployed moocher and also eleven years old. Experimenting and mastering and getting to know each game intimately. Not even questioning the idea that you’d want to play through something again with a goofy costume, or a noir filter, or an infinite ammo rocket launcher. It’s all pretty cosy stuff, assuming these sort of retro callbacks strike a chord with you. I guess the real Racoon City was the friends that tried to bite out our dripping neck tendons along the way, or something. 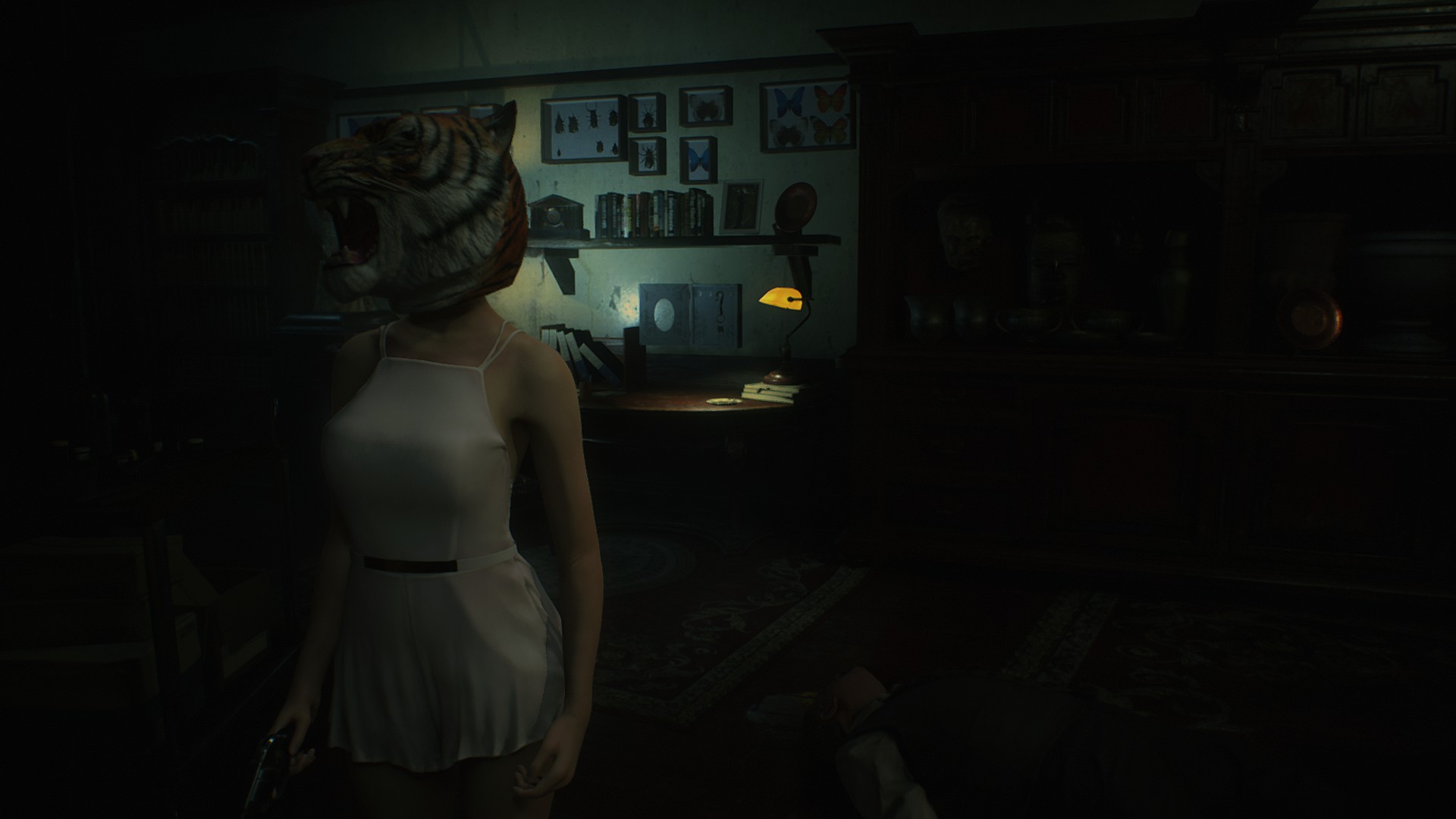 Importantly, the wackiness doesn't totally dismiss the game’s tense, haunting atmosphere. Nor its chilling creature design or understated use of sound to evoke deep dread or pulse-pounding triumph. All of this is still present in Ghost Survivors, but the clever thing here is in novel application of familiar threats. “Nothing quells fear like familiarity, and nothing is more familiar than a zombie,” Matt said in his Resident Evil 2 review. Through design that makes it easy to trim any extraneous fat globbing up the actual act of pressing buttons to make stuff happen. Resident Evil 2: Infected Coparoos does seem to recognise that the “horror” part of survival horror tends to devolve into scripted tedium once you know what to expect. Its response is to build an entire, much meatier method of engagement underneath, and I think that’s just swell.