I skulk through a bottleneck boulevard before pausing to launch my newly-charged sonar arrow at a wall. Its my signature ability, and reveals the locations of all enemies within a small radius. As the timer winds down, I decide it’s time for a last-ditch effort to plant the spike. I launch myself around the corner and ru-

Bang! I don’t see where it comes from, but one shot from the Vandal, aka AK-47, and I’m reacquainted with the dirt for the third round on the trot. I hear a cacophony of tuts from my disappointed teammates who knew exactly where the assailant was. This all feels vaguely familiar.

Valorant is Riot’s spin on the first-person team shooter, and is gearing up to compete in the big leagues alongside Overwatch and Counter-Strike. At the moment it boasts a roster of nine Agents, all of whom have their own unique abilities, and its core game mode involves either attacking or defending a bomb site by planting or defusing a mysterious object called the Spike. Like Counter-Strike's bomb defusal mode, you can also win rounds by eliminating the entire enemy team - although this only works if the Spike hasn’t been planted yet. You earn credits after each round, which you can then use to buy better guns and extra abilities at the start of the next one. Pretty standard stuff.

Some of Valorant’s familiarity is less vague. Omen, its roguish, hooded misanthrope, resembles one specific edgelord from another hero shooter, Overwatch's Reaper. His Ultimate ability, “From The Shadows,” even shares its name with one of his voice lines. 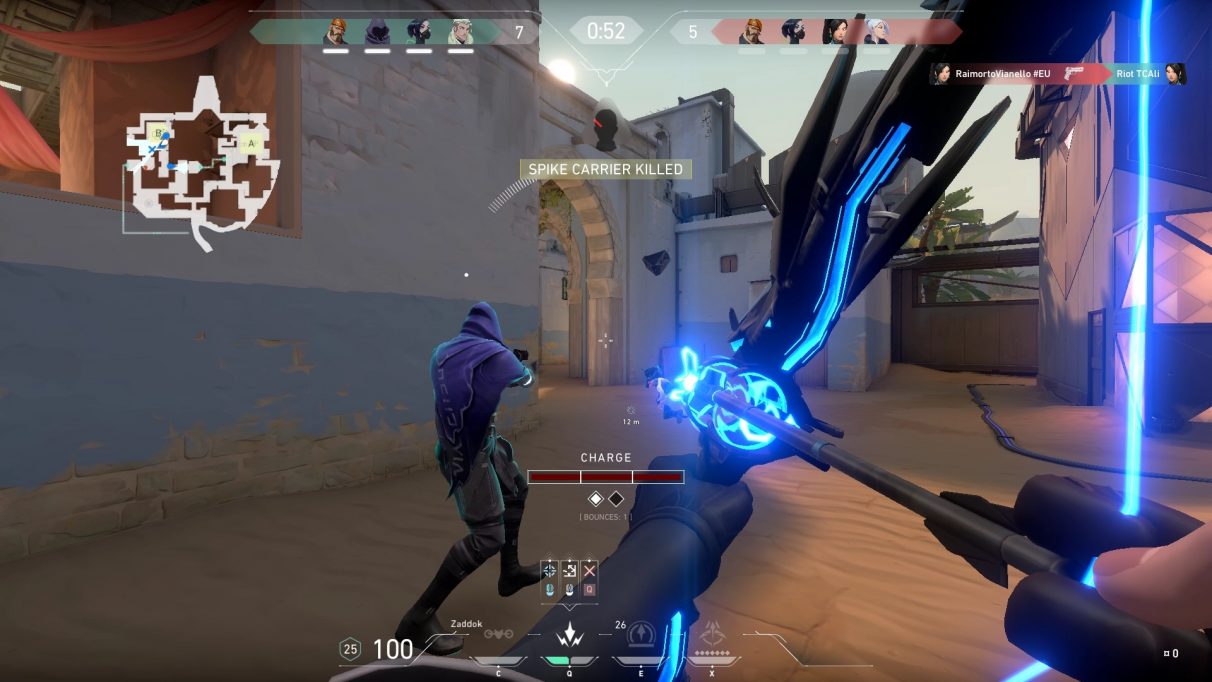 Fortunately, other character design is much more inspired. Phoenix uses sweltering storms of fire to overwhelm his enemies. He also heals himself by hanging out in lava, which means he is exceptionally cool. Viper uses loads of different toxic weapons to set up green smoke clouds and spray her opponents with acid sprinklers. Sova looks like Legolas and has the same abilities as fellow gun-shunner Hanzo, carrying a quiver of location-revealing Sonic Arrows and some kind of electric version of Overwatch’s Dragonstrike.

“Making Agents in a game like this was difficult,,” Valorant senior game designer Trevor Romleski tells me via email. “Exhaustive playtesting and aligning as a team was critical for us to find the right way to execute on characters in a tactical shooter. We had plenty of hilarious moments along the way where we tried an ability that sounded great in theory, but turned out to totally not work for our game.” 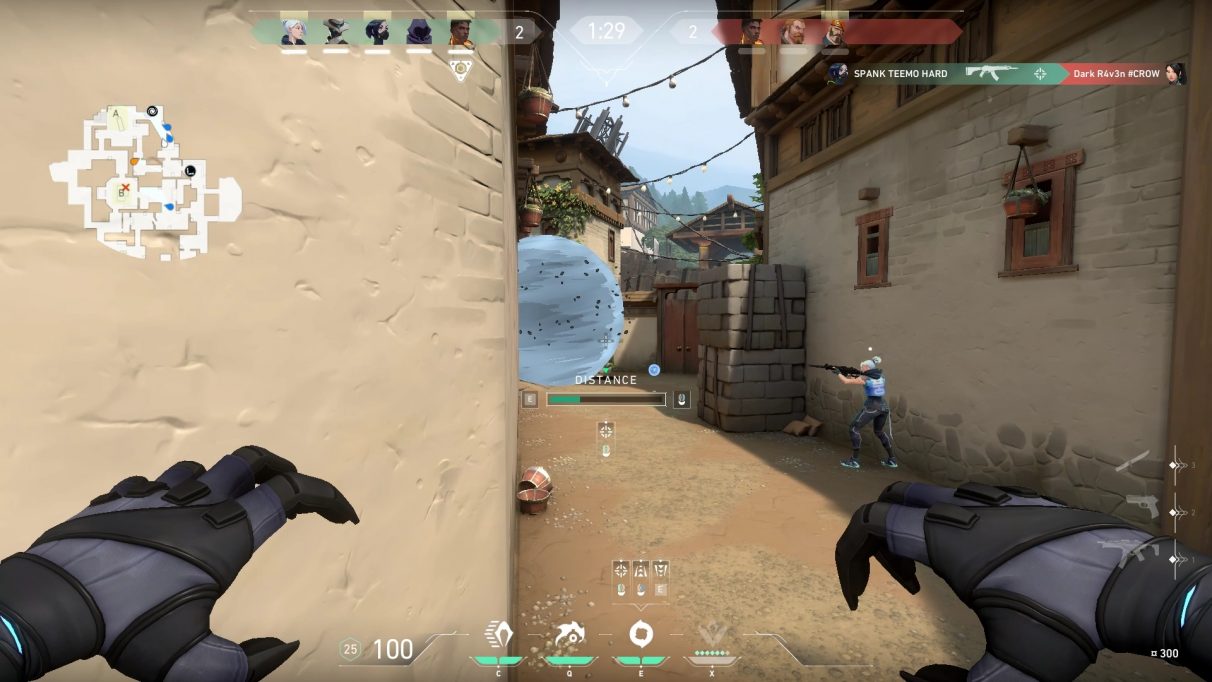 Valorant matches are 5v5, and you can only have one of each hero on your team. Although I played for all of last weekend, I couldn’t for the life of me recognize a need to have a mix of the different character types (Duelists, Controllers, Initiators, and Defenders). However, I did notice that most of the good players were either Phoenix or Brimstone mains. (Brimstone is your typical “I used to be an army man but now I’m not anymore but I still wear the beret tho” guy.) At the moment it seems the meta is based on individual heroes’ capabilities, as opposed to focusing on team compositions.

However, the more I played Valorant, the more I started to doubt whether it even needed character abilities in the first place. They’re largely inconsequential compared to the guns, in that aside from a few completely broken ones—Omen’s Ultimate allows him to teleport behind the entire enemy team immediately after the round begins—they seem to be usable only in highly specific circumstances. They seem to have more in common with, say, a Counter-Strike smoke grenade than Overwatch's fundamental character abilities.

Romleski says that Riot intends to run Valorant as a live service, meaning that overly powerful abilities without sufficient counters will be patched as necessary. It can be assumed that this will apply to less momentous signature abilities, too. But aside from some round-winners, there’s just not a huge amount of diversity in what appears to be a relatively shallow move pool. That's not necessarily a bad thing, but it is a surprise. 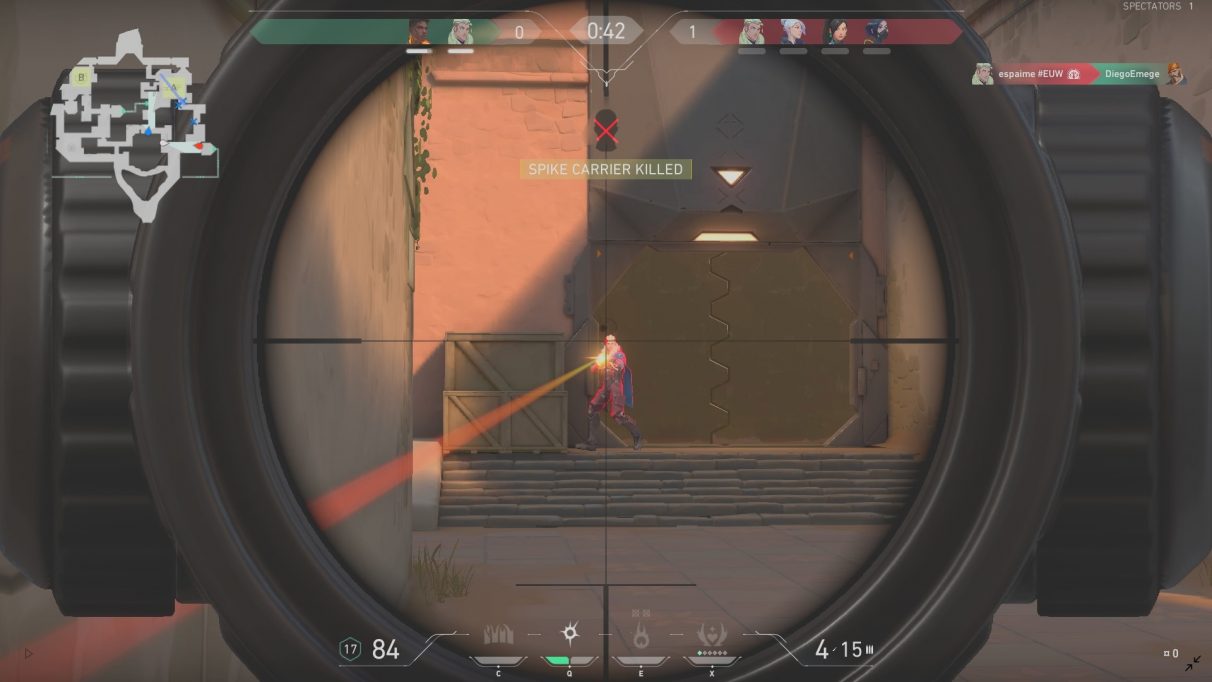 You don’t have a whole lot of vigor, either. Although you can buy shields at the beginning of each round, one or two headshots from almost any weapon will still kill you. As a result, it’s mostly about who clicks heads fastest, so abilities don’t add as much dimension to moment-to-moment play as I expected. At least not in their current state - or for someone like me, who is used to playing shooters that are emphatically ability-based, as opposed to more hardcore shooter-first variants.

“When setting out to build a tactical shooter, we wanted to address some of the common issues that plague the genre,” Romleski explains. He lists these as poor hit registration, peeker’s advantage, and a lack of updates and developer support.

“We saw the opportunity to inject abilities into the space,” he continues. “Abilities increase variability in gameplay. Our goal for abilities is that they complement the gunplay, and do not undermine it. Abilities are not the primary method for dealing damage and killing enemies in combat.” 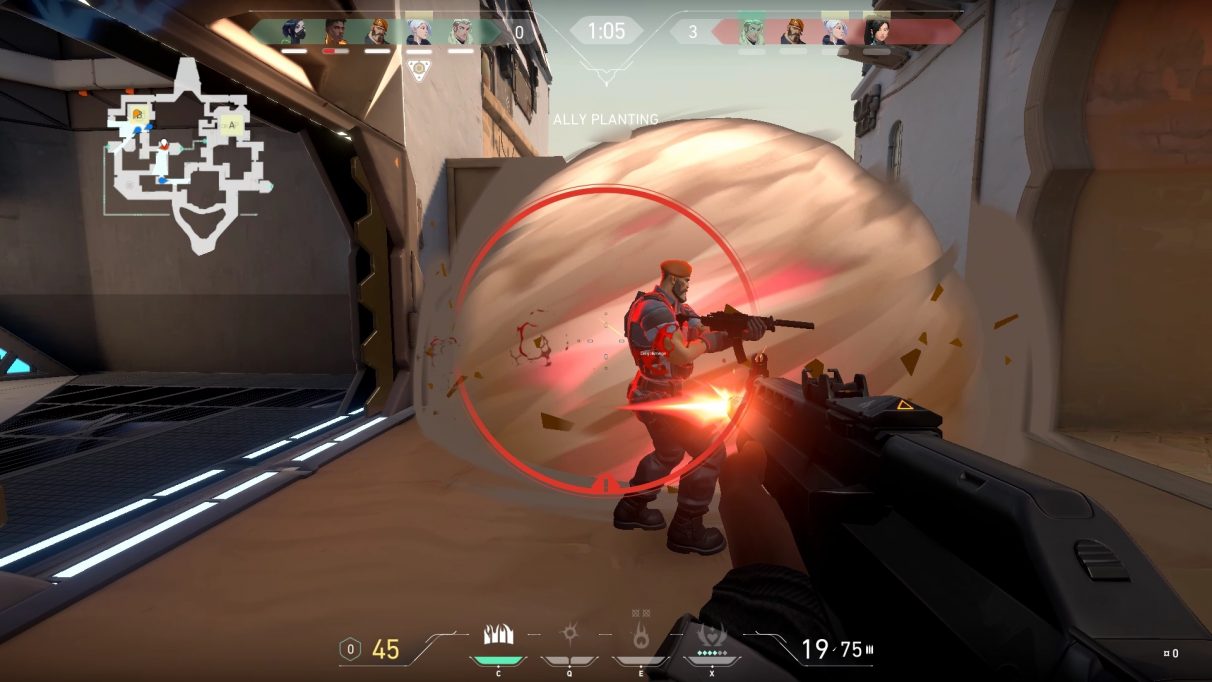 Although the abilities played only a small role in the matches I played, the “tactical gameplay fundamentals,” as Romleski calls them, are far more promising. As soon as I learned that this alley leads to Point A whereas that one terminates in a cul-de-sac for sitting ducks, I started to enjoy my games a lot more. One map features a quaint town centre boasting a Portuguese-looking architectural style, lined with palm trees and Spanish arches. Its composed of pastel colours as opposed to aiming for realism. Another is set by a baroque temple, and juxtaposes grass-hewn stone with a concrete, built-up area. They’re all quite bright when compared to the greys and browns of Counter-Strike and Call of Duty, and have more in common with the art you’d expect to find in Overwatch or Team Fortress 2 Although the maps are relatively small, their sinewy backstreets and cross-map teleporters allow for quite an intense game of hide and seek.

The suspense of each round is amplified by the excellent feel of the guns - all of them shotguns, SMGs, sniper rifles and so on. They're remarkably well designed, in that when you use the Operator, for example, which is a sniper rifle capable of killing someone donning full shields with a single shot, it feels like you’re holding a Barrett .50 cal that’s been tinkered with to fire super-sized flaming cannonballs. To gain access to a weapon like this, however, you’ll likely have to save the credits you earn each round for quite a while. According to Romleski, the existence of an in-game economy “creates the potential for high and low moments.” 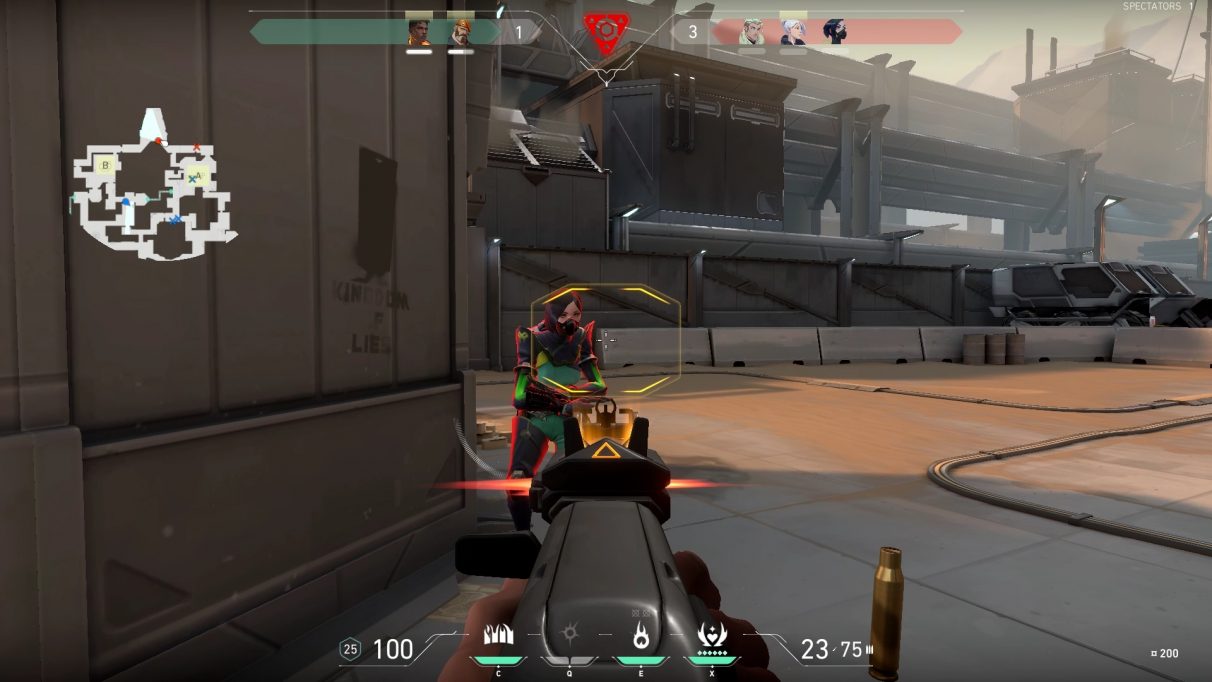 Unfortunately, because games are best-of-25, these moments can be few and far between. You start off by either attacking or defending for 12 rounds straight, at which point you switch sides. Rounds are less than two minutes long, so it’s not as if each one is a marathon of its own, but I think out of the 15-20 matches I played, only one was genuinely riveting from start to finish (a 13-12 loss—I had the honor of being last alive on my team in the final round and losing us the entire gauntlet in spectacular fashion by clumsily firing a Shock Arrow in almost the complete wrong direction). I would be lying if I didn’t mention that I wished I could leave midway through a match on more than one occasion because I wanted to make a cup of coffee, or get started on some work, or do anything that wasn’t play a near hour-long game of shootybangs. Thankfully other modes are likely to arrive which will be more flexible.

“We spent a lot of time iterating to find the right number of rounds for Valorant,” Romleski explains. He tells me that it was important to implement “texture” over the halves, allowing for teams to swap strategies on the fly. “We chose swapping teams at the halfway point so that you have the opportunity to iterate on what you’re seeing in each round, picking up on your opponent’s behaviors and strategies to react to them,” he continues. “For those who don’t have the time to commit to playing a full match of Valorant, we’re exploring alternative modes that require less time investment and will differ from the core game mode experience.”

With only the core mode intact, however, Valorant seems like a well-designed esport that could attract viewers but alienate casual players. Romleski says that one of Riot’s goals for Valorant is competitive integrity. “While not an explicit focus, [it] can lend nicely to the making of an esports title,” he says. “In regard to designing for a pro versus casual player base, our priority is to ensure the game is great at the highest levels of competition for players who invest the most commitment to the game. Once we’re confident this is the case, we seek to cascade this experience to all other levels of play as well.” 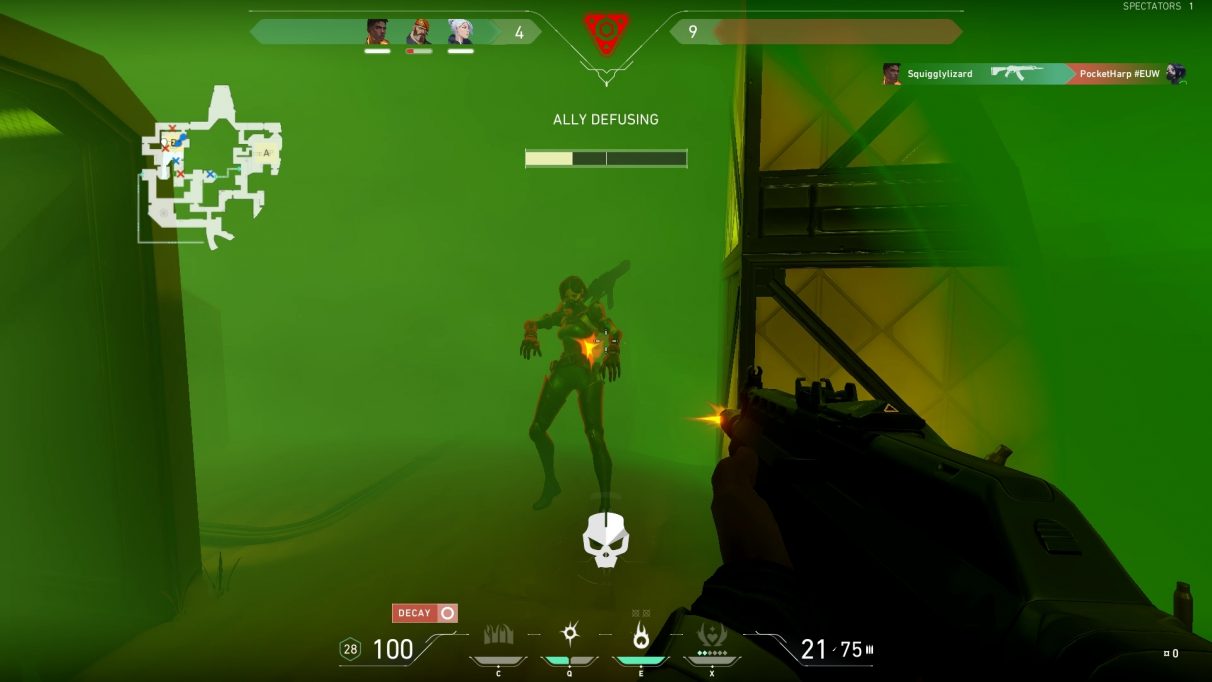 It’s important to qualify all of the above. This, after all, was a closed beta designed to show a snapshot of what’s to come. As a result, it’s unlikely Valorant proper will launch with everything I experienced intact. Additionally, my criticisms are born of having high hopes for Valorant, provided it can find its own identity outside its obvious inspirations, and Riot work on adding consequence to actions other than clicking heads.

As it stands, it is a perfectly acceptable shooter with tense gunfights and cleverly-shaped arenas, but it really does feel like CS:GO with an Overwatch reskin. It needs to be far more distinct, because at the moment it’s not as good at doing what either of those games specialise in, and it’s certainly not making a case for a hybrid entity drawing from both.