Well done, everyone. Between the festival of catharsis that was Wolfenstein 2: The New Colossus and Call Of Duty's return to World War 2, we've officially put shooting virtual fascists back on the menu. Jolly good show.

Still hungry to grind some more into kibble? Here's a couple of free treats to keep you going until Wolfenstein 3. Granted, the goose-stepping villains in Doom mod Shadow of The Wool Ball and its sequel Rise Of The Wool Ball are cats, but they're pretty villainous, and unless you're happy with the Planet Of The Adorable Hedgehogs being ground up into kitty litter, you're going to have to shoot a few.

While Shadow of The Wool Ball wraps the hard-edged world of Wolfenstein in cute cartoon silliness, it largely adheres to the design of Id's seminal FPS, chunky grid-maze maps and all. It does make some refinements to the formula, though; level design is more coherent, the enemies are less likely to take off a third of your health with a single lucky shot, and the weapons are more balanced all round. The improvements to the formula are subtle when taken individually, but put all together it flows far better than Wolfenstein 3D, and many secret areas reward you with more powerful golden ammo, making hunting for hidden rooms all the more worthwhile. 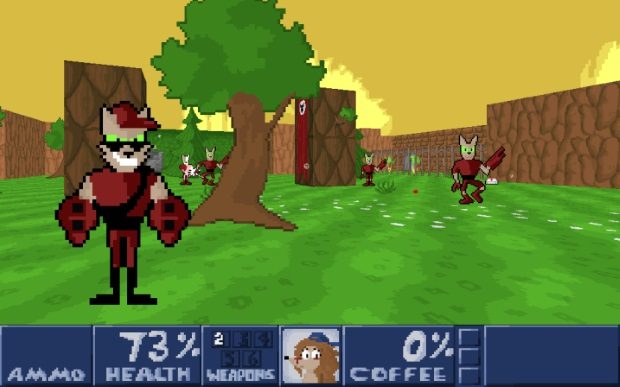 As enjoyable as Shadow of The Wool Ball is, the sequel, Rise Of The Wool Ball, gets my absolute recommendation. Building on the idea that Apogee's Rise of The Triad was initially envisioned as a sequel to Wolfenstein 3D, it adds a third dimension with copious bounce-pads, floating platforms, and cat-trees to climb in order to navigate the world with a little added verticality. Navigation becomes key in both games, as they also introduces a Descent-like 'escape the exploding base' phase to most levels just to spice things up a bit. It adopts the upgrades that Rise of The Triad brought to the table without getting bogged down by the negatives, and adds a few ideas of its own.

Rise of the Wool Ball's arsenal is a notable change from the 'Unlimited bullets, limited explosives' formula of the original RoTT. Instead, the weapons feel a little more varied and Doom-like, with less emphasis on hitscan weaponry. Enemies are similarly improved in their variety and more enjoyable to fight, often giving you a fair chance to evade oncoming fire. Rise of The Wool Ball spans a much wider range of scenery than the original, especially the secret levels which are well worth taking the time and effort to uncover. Each of the episodes is capped off with a surprisingly enjoyable multi-stage boss fight, improving on the decent but workmanlike slugfests of the original.

In order to play either of these games, you'll need the GZDoom engine and for Shadow, you'll require at least some variety of Doom 2 WAD file. While you could use the one from Doom 2 if you own it, the fact that this is a total conversion (leaving almost nothing of the base game behind) you can just as safely use the Freedoom equivalent if you're a little short on change. Rise of The Wool Ball fully embraces this, and requires no Doom data to play, with newer versions of GZDoom recognizing it as a standalone game. Just place it in the GZDoom directory, run the engine and the option will be there.