If you click on a link and make a purchase we may receive a small commission. Read our editorial policy.
Developer: Hopoo Games
Publisher: Gearbox Publishing

It's raining, it's pouring, the old man is about to drive his insectoid claws into your neck stump. When a sudden shower belted out the early access launch of Risk Of Rain 2, my first impulse was to go dancing in the storm.

Like its 2D predecessor, Risk Of Rain 2 is a sci-fi roguelike defined by ever-escalating difficulty, and an ever-growing pile of items that radically change your capabilities. Unlike its predecessor, it's in 3D.

I want to like it so much more than I do.

I'm aware that's a silly statement, because it applies to literally everything that isn't damaging to my health or conscience. It's still apt, though. The problem is that while I enjoy so many of Rain's building blocks, I can ultimately build little out of them but boredom.

The first block is the world. At the start of each run, your drop-pod smashes down into the first (partially) procedurally-generated planet. It's always green, and always ancient-ruiney. Your goal is to reach a teleporter, then charge the teleporter while fighting whatever monstrosity you just summoned.

I dig how each world evokes a different flavour of weird, but the environments are always eclipsed by their inhabitants. The rain in Rain falls mainly in the form of monsters. Big, strange, varied, and increasingly numerous. 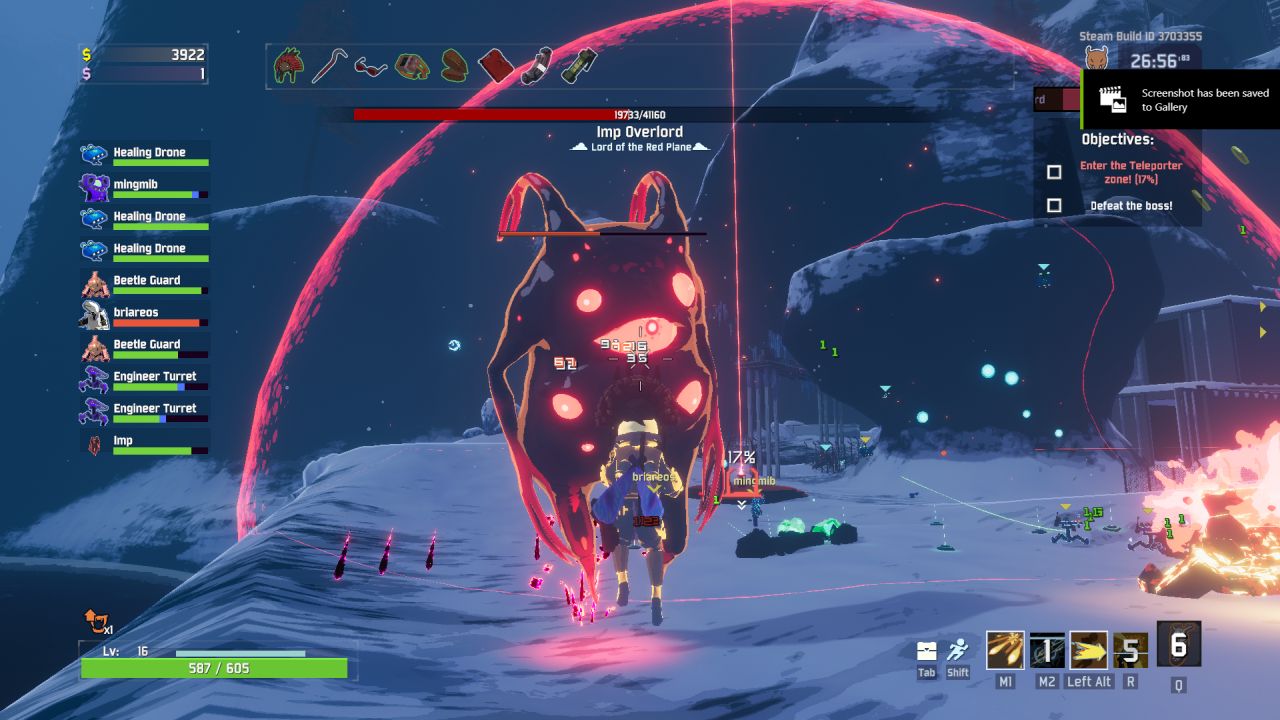 If you drop me onto a planet with weird and varied aliens to squash, of course part of me is going to have a good time.

That's what I'm all about. Being charged by tentacled bison, zapped by jellyfish, slashed by dinosaurs. It's a similarly eclectic menagerie to the first game, and I can see how some might be irked by buckets of incongruity. Me, though? I'm just happy I can shoot a demonic imp and watch it get clawed back into hell, then turn around and spot robots being 3D printed into existence like web pages on 90's modems.

The abilities are spicy too, especially the warrior's. She's one of the three characters I've unlocked so far, and by far my favourite. She can attack while sprinting (without aiming!), teleport, and rain arrows down on people as she leaps into the air. I feel spoilt for choice nowadays when it comes to games that make movement feel good, and this is definitely up there.

Most of all though, I like the items. That's the main appeal of this brand of roguelike: stacking up effects until you're a tornado of destruction. Sometimes, a run will end before I can get off the ground. Other times, I'll find a feather that lets me double jump. Then I'll find a kinetic dispersion device that increases my jump height and lets me do a ground slam. And then I'll realise that does damage based on how high up I am, and that I can combo my double jump and my charged jump and my ability jump and, and, and - you get the idea. 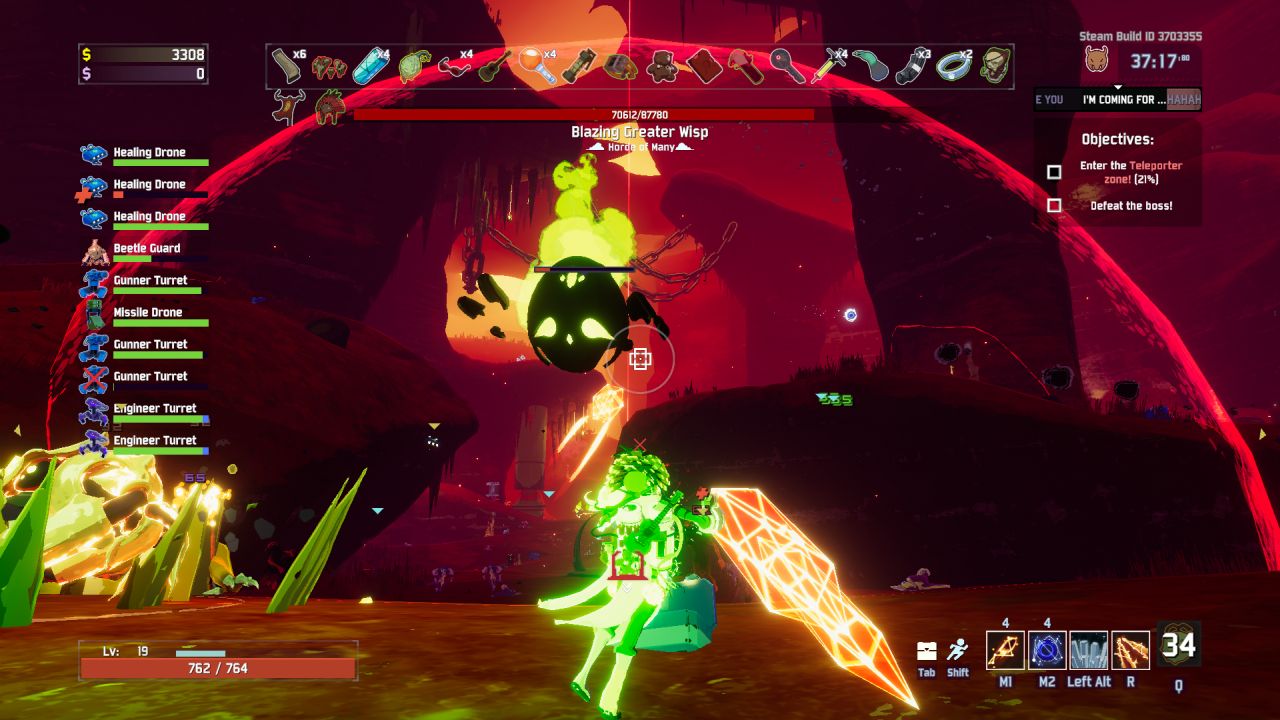 Another advantage, now that we can appreciate chancy precipitation in three dimensions, is that those items appear prominently on your body. It makes your capacities more palpable, and each run feel more distinct. 'That was the one where I got bug wings', you'll think, or 'that was the time I got a third phantom-arm that made homing daggers erupt from every corpse'. Cor, that was a run. My extra limb combined with another half a dozen chaining abilities, turning the air around me into a replicating swarm of stabby, stabby death.

I picked up that ghost-arm near the shop of a friendly alien, by the way. They looked like this. 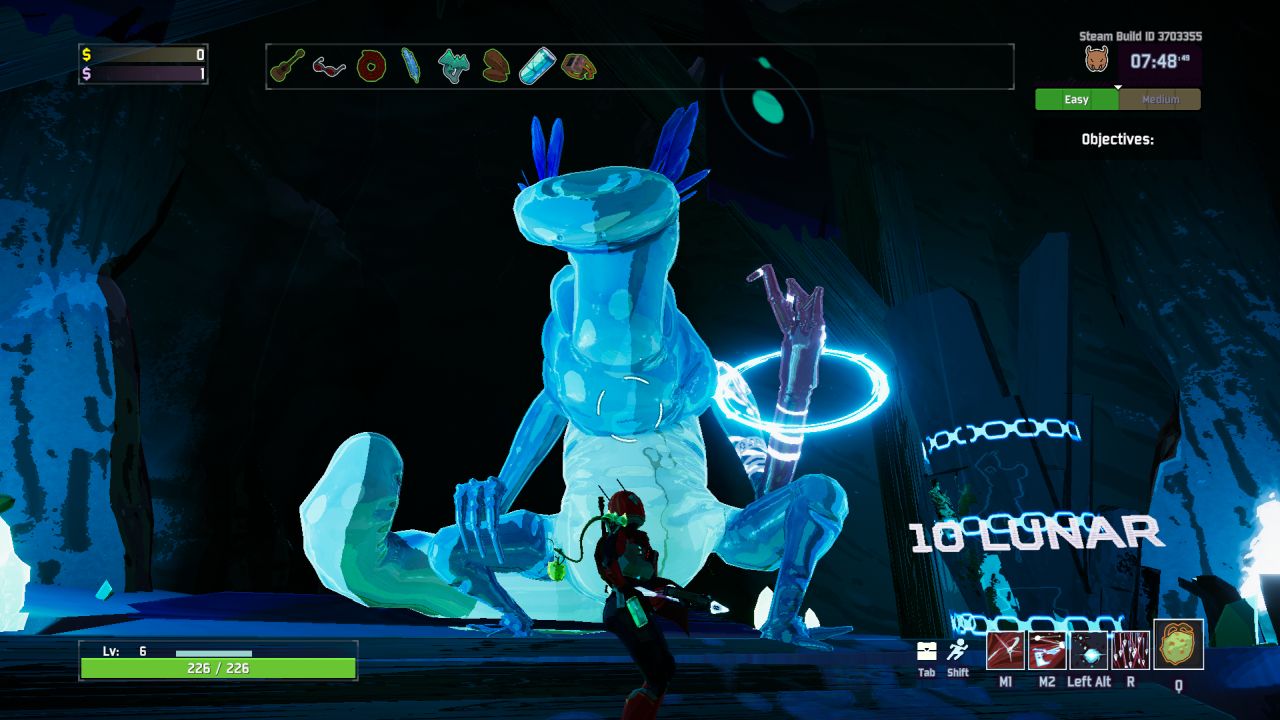 Like a man handed beetle wings and chain-lightning ukuleles, it seemed like Rain's individual parts might be stacking towards something great. After a few runs, though, everything came tumbling down.

One more snippet of praise, before we survey the ruins. I've described the normal enemies, but the bosses are better. Creepy worms. Towering, stalk-eyed automatons. Really, really big jellyfish. But repetition is the enemy of spectacle. Sure, there's a snazzy giganto-beetle - but there are only so many times I want to fight it.

The pacing issues don't help. Each level outstays it's welcome, forcing me to forage for too long before I can move on. I'd see that time halved. 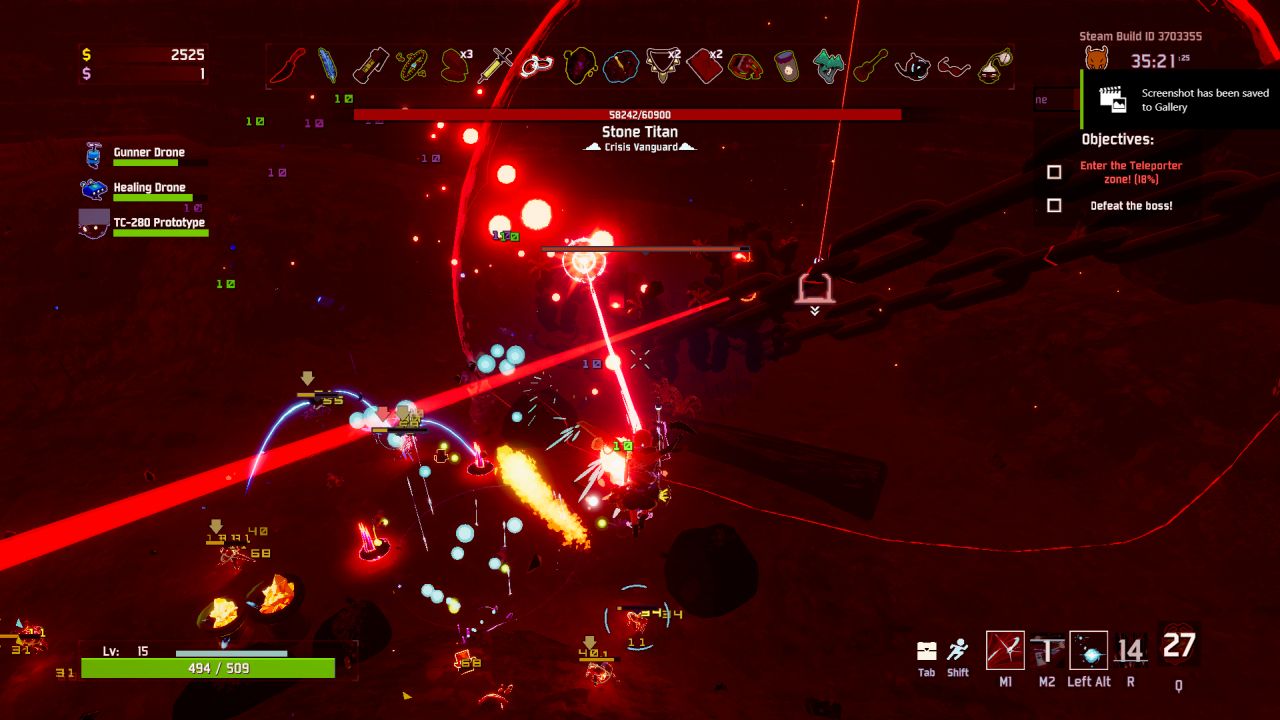 It's worth mentioning that I haven't been splashing about in ideal conditions. Most of my time has been spent on my own, comfortably zapping monsters until they suddenly turn around and zap me. I found the same problem with strangers and a friend, though - 90% of each run isn't challenging enough, then before I know it I'm blinking at my corpse being flung across the screen. There's a certain listlessness to each run, exacerbated by irrelevance when playing with people who know what they're doing. An apathy. Rain-ui.

And yet! I find myself coming back to touches I'm fond of. The enemy design. That cuddly shopkeeper. There's a context-sensitive pinging system I haven't mentioned, letting you highlight directions, enemies and loot in much the same way as Apex Legends. (Called it.) The music is fab, too, particularly when it changes as you dip in and out of the charge zone for the teleporter. 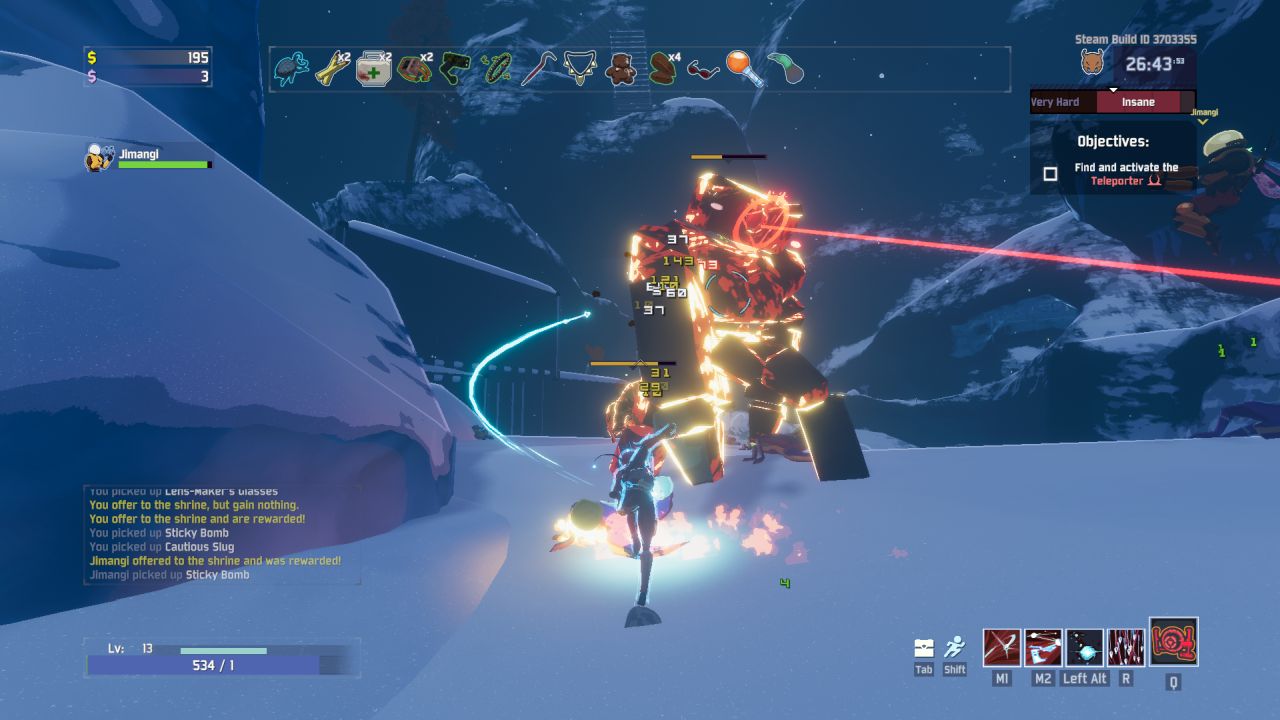 The question then, is whether Hoppoo Games can turn their drizzle into a downpour. They plan on spending the next twelve months in early access, but new items and characters won't be enough to tempt me back into the deluge. Until the levels get shorter and the challenge escalates more evenly, I think I'll stay indoors.