Runescape’s newest update, Archaeology, adds a whole new skill to the almost two-decade-old MMO, but there’s some necessary context for what it brings to the table - at least historically speaking. At only 10 years old, I was as industrious as they came, and actually set up my own in-game business. I had people - probably much older than I was - chopping wood for me, which I then sold for profit or used to increase my Firemaking skill, like a proper little capitalist. All I had to give them in return were axes worth a measly fraction of my wealth.

Runescape was a simpler game in those times, where ordinary skills could be paired with one another to create basic but effective economic structures, most of which were founded upon the exploitation of fresh-out-of-Lummy naivete. But that was 14 years ago. Runescape is a different beast now, and the addition of Archaeology is unprecedented in more ways than one. “Skilling is not traditionally a vehicle for storytelling,” lead designer Dave Osborne tells me in an interview conducted over Zoom. “This completely upends that expectation.”

Senior game designer Tim Fletcher offers a brief breakdown of what the new Archaeology skill entails, noting that it combines excavating buried materials with restoring archaeological artifacts, as you’d likely expect. In his eyes, this alone is enough to shake up existing structures: relative newbies should be able to make a few quid if they’re diligent enough to dig loads at launch, he says, whereas players who have been around a bit longer will have sufficiently deep pockets to pay their way to artifact restoration.

But there’s more to Archaeology than the simple pursuit of max level, or the additive layer to Runescape’s labour-based, exploitation-ready economy. Osborne says that although Jagex borrows from some of the more typical tropes associated with archaeology, like the chalky exhumations popularized by primary school history books, the new skill also plays into the fantastical nature of Runescape’s world, placing an emphasis on the explorative elements “you’d expect from a Lara Croft or Nathan Drake.” 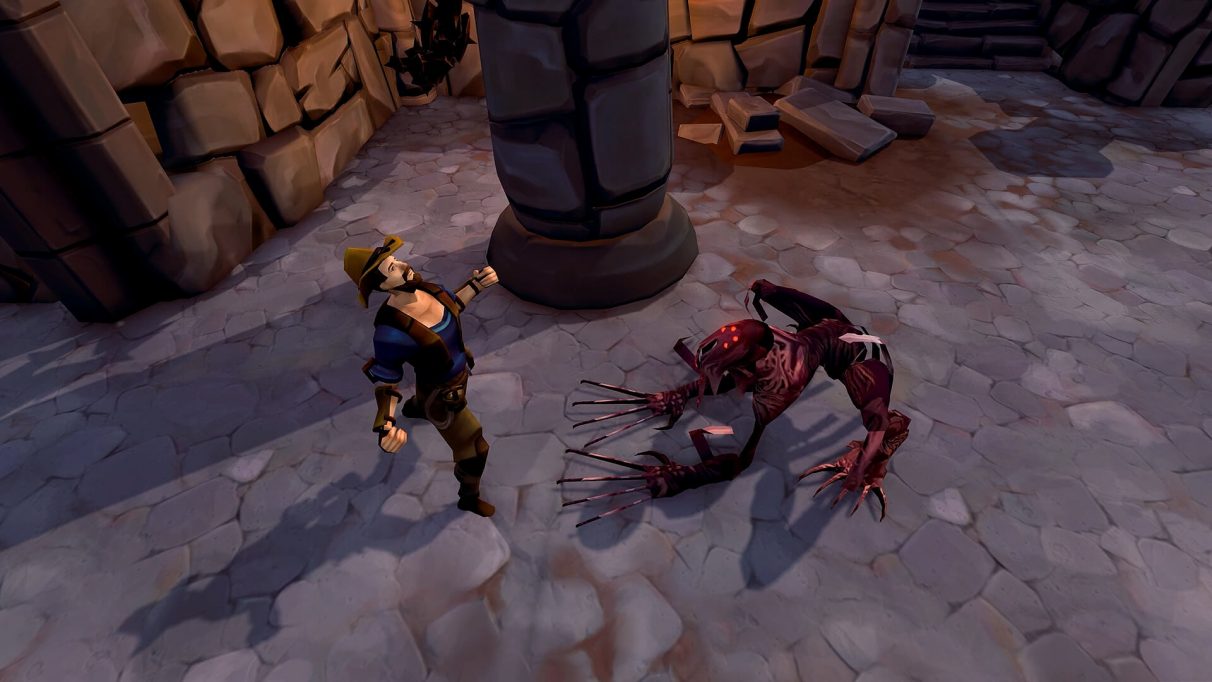 As a result, Archaeology tells a story of its own, and is intended to serve as a means of accessing the unexplored but rich world of Runescape’s past. Osborne mentions that dig sites range from the Circles of Hell and the Infernal Source to floating hawk citadels suspended high in the sky.

“There’s this first impression that archaeology gives of dustiness, of a slightly more boring or sedate activity - which is completely understandable,” he continues. “What we wanted to do was put a lens on it that was unexpected: diving into a tomb and being the first to raid it, or diving into exotic areas and excavating them while cutting away with a machete.”

Fletcher contextualizes these images, explaining that the instances you’re learning about generally occurred around 2000 years before present-day Runescape. However, it’s not just a sweeping, detached look at history. Instead, the time-defying things you dig up are weaved into personal stories. “We’re not trying to make this a history lesson,” Osborne says. “it won’t feel like that. It’s embedded into the world and mechanics of how the world came to be, because that allows us to do more storytelling.” He also mentions the new relic system, which allows players to obtain passive perks that are set to completely revamp the meta across Runescape as a whole. “There’ll be a lot of min/maxing and optimizing and all the good things you see in a healthy game.”

This marks an important strength of the update, too - min/maxing is a time-consuming act, but with Archaeology it doesn’t necessitate solitary pursuits. “Being with a mate and training together is very much what we’re trying to capture with Archaeology,” Osborne says. “The big sites are the same for every single person, but the materials I might be gathering might be of more use to whoever is next to me. We’ve been playing in-house and there’s been a lot of conferring and swapping, so it’s really a very social experience and each of the big sites has a social community element built into it.” He compares it to my beloved Woodcutting/Firemaking business from many moons ago, and my inner 10-year-old venture capitalist immediately begins to take over. 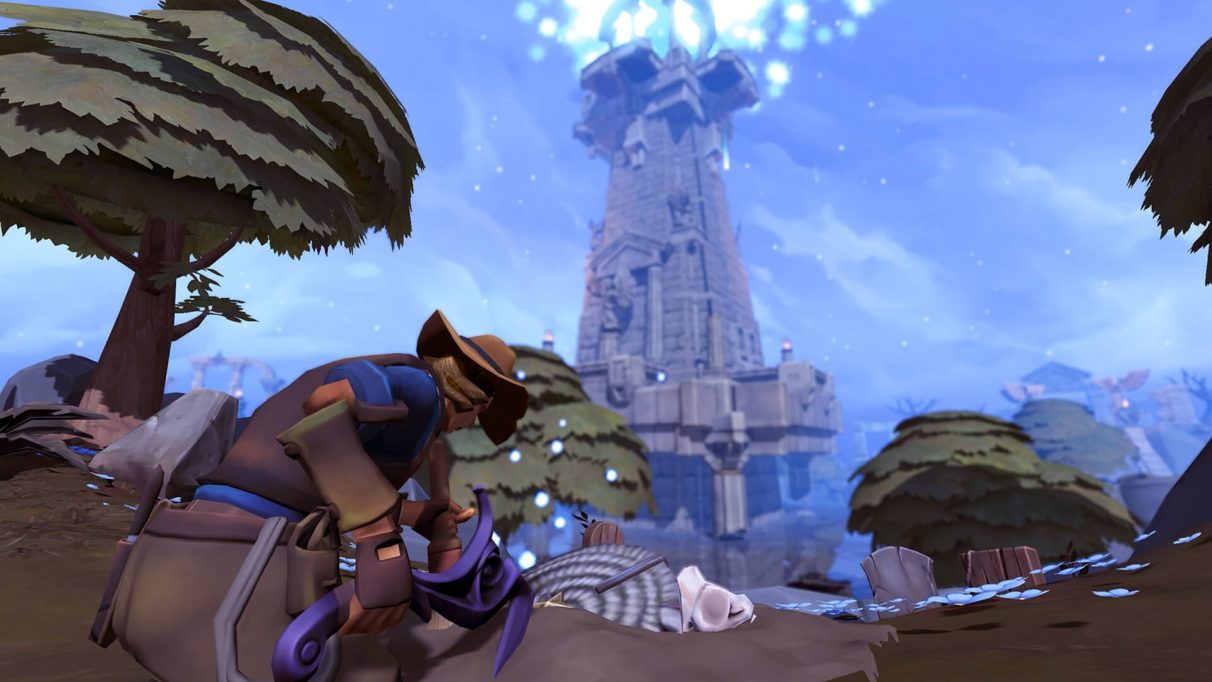 Archaeology wasn’t the only skill idea Jagex had in mind this time around. Osborne explains that “your necromancies and things like that” were also potential candidates. “But the opportunities this gives us feel different from anything we’ve ever produced,” he says, before mentioning other dropped (for now) ideas, including Sailing, Trading, and Spellcrafting.

So how did they land on Archaeology? “We sat in a pub,” Osborne says. “We had Ultimate Burgers each and sat there, whittling it down. We had three Archaeology pitches and five different Necromancy pitches, maybe two for Sailing. Archaeology felt like the most ‘Runescape’ skill out of the lot of them.”

Senior content developer Ryan Philpott explains the process that followed. Alongside taking notes of what players had asked for in the past, as well as recognizing the things that people disliked about previous skills, Jagex sent out a sort of secret survey that didn’t include any explicit information about Archaeology, but was designed in such a way that the team could wrangle useful information from the answers.

Philpott builds on what Osborne and Fletcher said, noting that digging isn’t just some sort of mundane activity here - Runescape is a fantasy world where magic is normal, after all. “It leads to learning about gods,” he explains. “They have magical powers, and you find items with serious power that you can harness, so it’s about blending it with the Runescape cycle.” He mentions that another dev had him read up on the Romans for their Everlight at Icyene, which will play a part in the upcoming story, because Runescape’s gods are largely derived from real history.

However, Osborne reiterates that they were mostly interested in the kinds of adventures you might see in Indiana Jones and The Mummy. “We were more driven by that than we were Tony Robinson,” he adds, before Fletcher clarifies that “Tony Robinson is in there.” 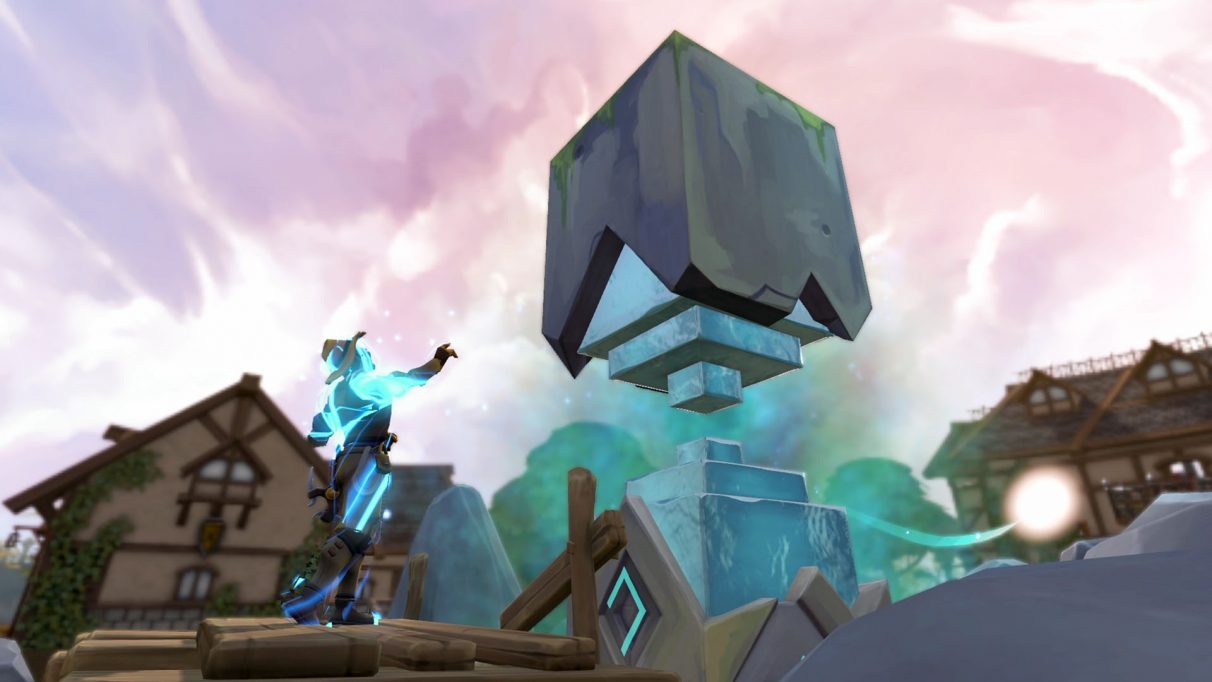 Osborne breaks down some of the things players can expect from the storytelling to come. “I really like that you are digging up in Stormguard,” he says. “Rather than digging into the earth, we’re looking up into the skies and digging there, because these are floating citadels that were used as defensive bastions by a winged, hawklike race called the Aviansie.”

“That’s slightly contrarian, and there’s some joy to be had in that,” he continues. “We’ve also got the lighthouse in the middle of the vampire continent. The vampires are looking to put the lighthouse out - they don’t want it to exist, it’s magically always on, and they’re looking to extinguish it. There’s something roundabout and back to front about that storytelling I really like.”

However, because narrative progression isn’t usually tied to skills, implementing Archaeology was a different ball game for Jagex. Fletcher compares it to last year’s Mining and Smithing rework, which saw one of the biggest overhauls of a single system in Runescape’s 20-year history. “[That] was quite unusual in development terms because it was developed almost entirely in public,” he says, before noting that reworking existing systems that already feed into a variety of others involves repurposing integral parts of the game.

“I was sitting up late at night with players writing designs and then publishing them for player feedback before I took them to the developers,” he adds. “The players were making spreadsheets and Monte Carlo simulations for me.” Archaeology presented a different case, being developed mostly in secret. However, it was a less dangerous risk than other features, according to Fletcher.

Among these features are Darkscape, a more hardcore version of Runescape where PvP is turned on and the items you store in a specific area are kept there. There’s no bank system you can access from any branch - if your money is in Varrock, you can’t withdraw it from Lumbridge. 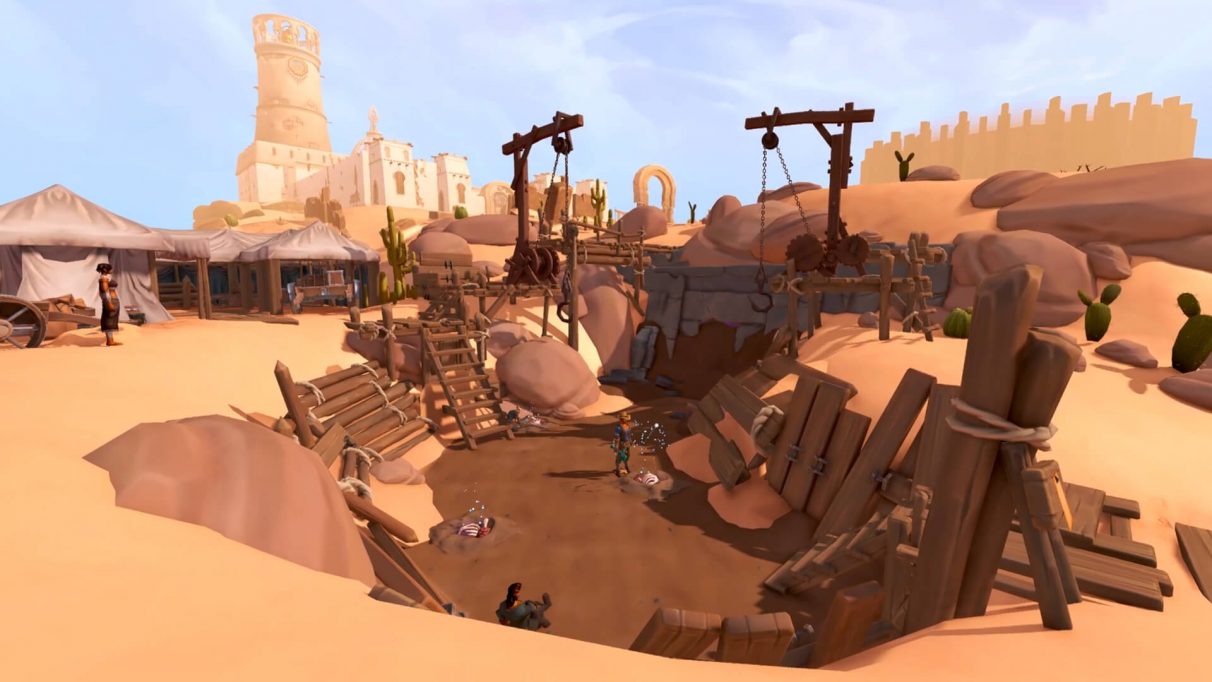 “We’re looking at how we can riff on our own game,” Osborne adds. “I remember Reversescape was something we pitched a while ago, which was the idea that you’re levelling down from level 99 to level 1.” Because you would hypothetically lose access to certain items as you down-levelled, this could introduce an interesting degree of strategy in figuring out the optimal way of levelling down.

“We discussed it as a pass-away design comment while coming up with ideas,” Philpott adds. “But it’s very interesting, because the concept is simple - you just level backwards - but take a 20-year-old game and put everything in reverse…” Philpott uses Woodcutting as an example, saying you could cut Yew trees at level 99, but as soon as you dropped below 60 you’d no longer have the ability to obtain your own Yew logs, which you could potentially still need. “It’s about this weird meta,” he says.

“We brainstorm ridiculous things and then have to filter them through, “is that actually a good thing for our game,” Fletcher says. “[Osborne] really wants to do auto chess and we asked the players and they said nah, we don’t really want that.”

“I’m gonna wheel out ban bidders if we’re not careful,” Osborne responds “Ban bidders was basically [the television show] Storage Wars in Runescape, the idea that if we ban players and those players have a lot of wealth, well what if you knew a little bit of information about the person who was banned but not enough to make a decision? And then we’d have players bidding on their wealth. Televise that, it’s great.”

In terms of concepts that will be making it to the game in the near future, though, Fletcher explains that the Archaeology launch will be the most significant narrative addition to Runescape until the next major update, the combat-oriented Elder God Wars Dungeon. “Having talked to players they keep scratching their heads going ‘how is that gonna work,’” he jokes. 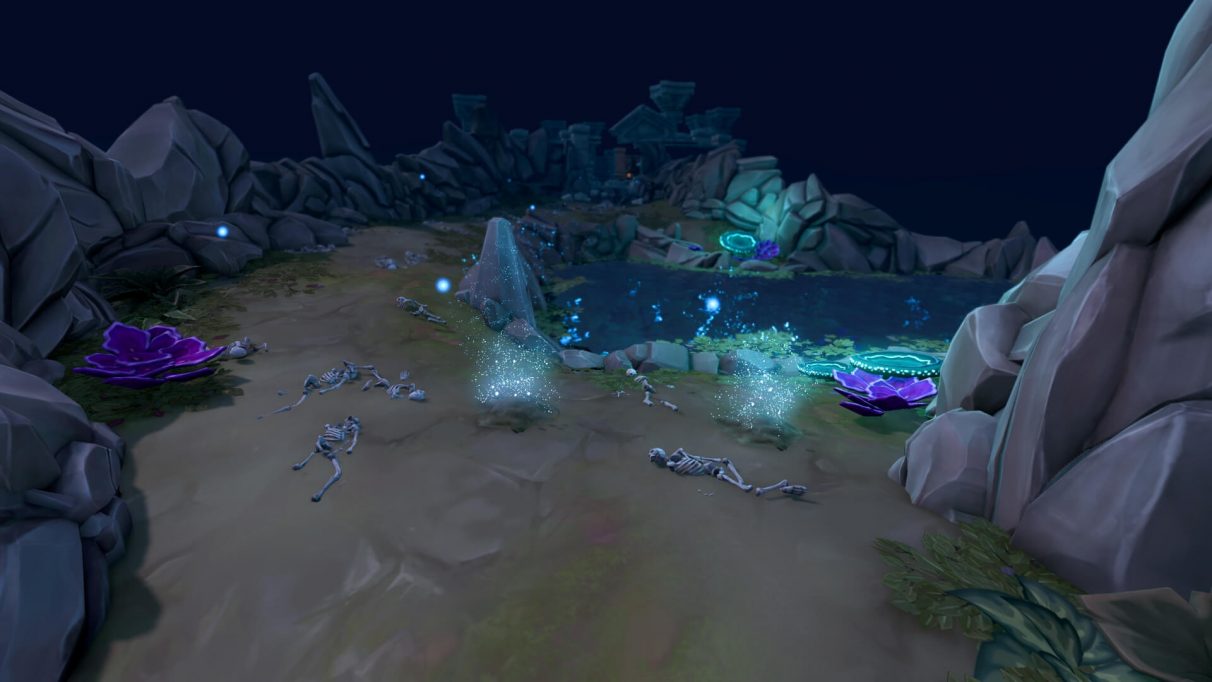 He’s quick to qualify this though, and explains why this works in a game like Runescape specifically. “If I want to go and play an MMO on my mobile I can, but they’re very carefully orientated around session length and managing your playtime and not so much about sinking myself into an infinitely large world,” he explains. “We see ourselves as far more of a player-directed, self-goal-driven game, whereas World of Warcraft really kicked off the theme park design of MMOs, where you’re led around almost linear quests.”

“For a lot of players, it’s like Runescape is their Avatar,” Osborne adds. “They’ve had years of progression stacked on the quests they’ve unlocked, the items they’ve unearthed. I don’t need to choose another character, this is me, this is who I am. My bank, my character, and my levels.”

Osborne points out that the Archaeology launch will be massive, but Jagex doesn’t have any time to slam the brakes. “Next year is the 20th anniversary, so it’s proper exciting down in Cambridge,” he says. “Not many games get to celebrate their 20th birthday, so let’s all gather round the campfire and sing some songs.”

Until then, however, players will have 120 levels of Archaeology to sift through when today's update launches. And Fletcher says he’ll be hanging around on the other side of locked doors waiting to congratulate the first people to come through for becoming master archaeologists.