Rust [official site] now has the ability to let players sit in chairs. I feel like, despite my own lack of Rust experience, sitting in chairs is not a core part of the Rust survival game experience. I was kind of hoping that the game was taking an unexpected detour into the ancient sport of trying out furniture while a sales assistant hovers nearby but apparently it's part of a mounting system intended to help with vehicles and their attendant need for seated interactions. I preferred my idea.

Chair sitting is thus extant, but disabled for fear of exploits. Presumably exploits like being able to sit on a porch and get a twinge in your avatar's leg to warn you that trouble is coming. I have a scar which prickles in storm weather. I assume sitting will be activated once a fuller version of the mounting system is in place.

There's a bunch more which Rusters (??) might want to read in the dev blog but outsiders like me will skim all of that and land on some lovely pictures of ice lakes! 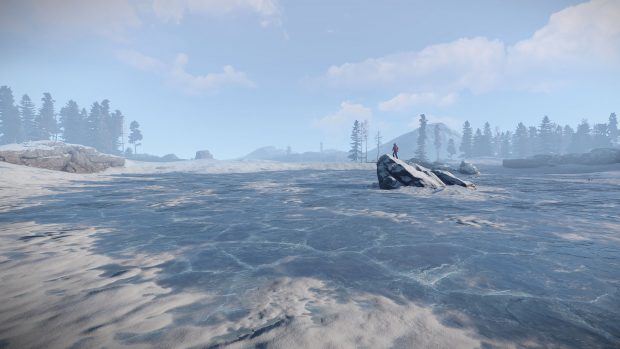 Ice lakes are part of a system of natural monuments which level designer, Damien Lazarski, is billing as handcrafted elements which will slot into the randomly generated terrain and be appropriate to the biomes.

"My goal is to make a series of natural monuments that would be randomly spawned during the map generation process. These will be handcrafted scenes that will be blended with current randomly generated terrain, giving a nice mixture of random and bespoke areas. They should serve as landmarks, helping people find their way around the map, give a greater degree of visual variety and provide players with unique areas to build on. Most of these natural monuments will be biome specific, so you can expect that each biome will have a distinct look and feel and that building in certain areas will come with some pros and cons."

The ice lake pictures are because the first monument of this type is the frozen lake for the ice biomes. There are a few variants and players encountering one "will see floating icesheets that will expand the playable area into the ocean, as well as new icebergs that will have multiple access points." 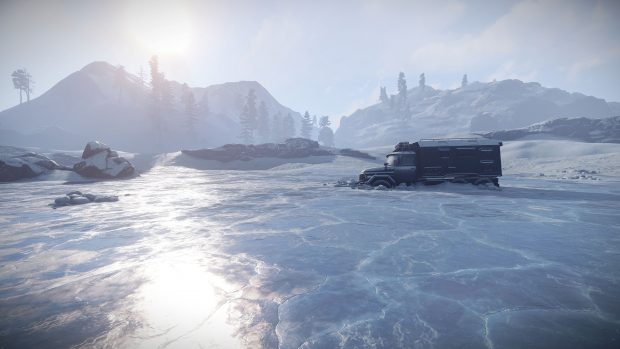 Other biome monuments are not yet settled but possibilities include canyons, sand dunes, plateaus, marshes and natural rock formations. The latter two would be temperate, the others, arid.

The full dev blog is here and is full of things you'd need to be a Ruster to follow. Or not distracted by ice lakes.

Disclosure: Craig Pearson used to do RPS things but now works over at Facepunch.