If you're in the market for an SSD upgrade (and if you're still using a hard disk, you really should be) you're spoiled for choice. Any modern SSD, such as the Samsung 850 Evo, Crucial BX300 or WD Blue 3D, will transform your PC, but there are some of you who need the ultimate in performance. Enter Samsung's 850 Pro range.

The 850 Pro is a 2.5in drive with a standard SATA3 interface, so should be a simple upgrade for almost any PC or laptop. Of course, while SATA3 can’t quite keep up with the very fastest flash memory technologies out there (such as Samsung's flagship 950 Pro and 950 Evo SSDs, for example, which require a motherboard with an M.2 interface), it's still perfectly fine for the vast majority of PC gamers bar ultimate bragging rights. To find out more about the differences between M.2 and SATA3, head on over to our SSD guide.

Getting back to the task at hand, I was surprised to find a disc containing the SSD's software in the 850 Pro's box, which saved me from having to run an Ethernet cable from my router to my test PC through all my daughter's Lego and soft toys littering the living room . You may not have this problem, of course. On said disc, you'll find Samsung's Data Migration and Magician software. Data Migration is an incredibly easy-to-use program (at least for those of us used to the clunk-tastic-yet-effective EaseUS ToDo Backup Free) that copies the contents of your running system to the new SSD. Just plug your new drive into your PC, click a button or two to transfer Windows over, and reboot.

Oddly, unlike most disk cloning software I've used, Samsung's application also cloned the 'signature', or name, of the disk, leading to much confusion in the BIOS as I tried to select the new SSD as a boot device. Unplugging my original drive solved the problem. Magician, meanwhile, is another slick application, full of information about your SSD and how to optimize its performance. 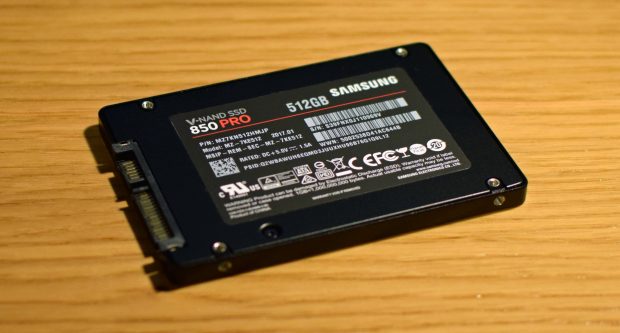 To see how the 850 Pro performed versus the more mainstream drives we’ve tested, I fired up the AS SSD benchmark. This performs a number of read and write tests, but I pay particular attention to the sequential and 4K random tests. Sequential writes and reads 1GB of data to and from adjacent areas of an SSD's memory, and is a best-case scenario for SSD performance (and the kind of test that manufacturers use to promote their products).

The 4K random benchmark splits the 1GB data into 4KB chunks and writes and reads them to and from random locations. This mimics an operating system's behaviour, so is a good indicator of how responsive an SSD will make your PC feel. I also ran the response time benchmark, which indicates how long an SSD takes between receiving a request and doing something about it – the less time, the better.

I ran the benchmarks on a high-spec AMD Ryzen 7 1800X PC with an Asus Prime X370-Pro motherboard and 16GB of Crucial Ballistix Elite DDR4 RAM, so the PC is unlikely to hold back the SSD's performance. As expected, the 850 Pro's performance is extremely strong. Its write speed of 496MB/s in the sequential test is the fastest we’ve seen so far on RPS, and 511MB/s in the read test is also a hugely impressive result.

The SSD really shines when it comes to 4KB random writes, managing 95MB/s. That's over 30% quicker than the 850 Evo. A 33MB/s 4K read time wasn't quite so spectacular (although still up with the best), but a 0.037ms response time when writing files is yet to be beaten on the drives either Katharine or myself have tested.

To get some extra oomph out of the drive, I turned on Samsung's Rapid technology in the Magician software. In a similar way to Crucial's Momentum Cache, Rapid uses system RAM to cache data before writing it to the SSD in the most efficient manner possible. It made a big difference in the 4K random benchmark, which leapt up to 70MB/s read and 195MB/s write. That said, opinion is divided as to how much real-world benefit the mode has, and it can also cause data loss if your PC doesn't have a battery back-up.

As it's a high-end drive, I ran an extra test on the 850 Pro to see how it would cope with intensive workloads. The CrystalDiskMark Random 4K Queue 8 Thread 8 test simulates the kind of workload that only an SSD in a high-end workstation (or a server) would expect to see. Results of 395MB/s read and 369MB/s write blow the 850 Evo's 288MB/s read and 252MB/s write out of the water. The only problem is that most of us would never be running programs that stress an SSD to this degree.

This in turn brings me to my main problem with the Samsung 850 Pro. It's extremely quick, especially in seriously intensive situations, but the vast majority of PC gamers are unlikely to ever perform the kind of tasks that will push it to its limits. This makes it feel excessive for your average gaming PC, and you'd probably be much better off spending a bit less on Samsung's equally excellent 850 Evo or Crucial's BX300. If you spend a lot of time editing and copying large video files as well as playing games then by all means go for it, but for everyone else, I'd recommend sticking with the 850 Evo instead.