When Samsung first launched their pair of flagship 960 SSDs at the tail-end of 2016, they were the fastest NVMe SSDs on the planet. Coming in 960 Evo and 960 Pro flavours, they were five times faster than your typical SATA3 SSD and offered almost as much speed as their PCIe-based interfaces could manage.

Today, little has changed, and both remain widely regarded as the best around, NVMe or otherwise, with the 960 Evo in particular often being the favoured choice over its more expensive sibling. Available in 250GB, 500GB and 1TB size options, the 960 Evo is still a lot more expensive than SATA3 SSDs like the Crucial MX500 or even Samsung's own 860 Evo, but with 250GB sticks starting from around £110 / $120, at least it doesn't feel like you have to remortgage your house just to get your foot in the door.

First things first, a small word about NVMe. Also known as 'non-volatile memory express', NVMe SSDs use a different interface to SATA3 SSDs and are mounted directly on your motherboard via an M.2 slot. As such, you'll need a fairly modern motherboard to take advantage of an NVMe SSD, so you may want to check your PC actually supports it before you rush off and buy one. Provided you've got the right board, though, then the 960 Evo certainly won't disappoint.

I was sent the 1TB version for review, which has better write speeds than the 250GB and 500GB models according to Samsung's spec sheet, but its read speed should be more or less identical. My test rig also consists of a 3.6GHz Intel Core i5-8600K processor, 16GB of Corsair Vengeance 3000MHz RAM and an Asus Prime Z370-P motherboard, so all the results below should be broadly representative of what you'll get on a modern PC.

First up in the benchmark arena was AS SSD's 1GB sequential test, which reads and writes 1GB of files in adjacent locations on an SSD's storage. Here, the 960 Evo produced a phenomenal 2484.64MB/s read speed and 1916.56MB/s write speed, which is pretty damn nippy.

Admittedly, the former isn't quite as quick as Samsung's claimed figure of 3200MB/s read (its write speed, however, is spot on), but when you stack it up against what a SATA3 SSD is capable of - say, Samsung's own 860 Evo, which managed 524.45MB/s read and 496.29MB/s write in the same test - that's still a heck of a lot faster than what you're probably used to.

Indeed, when I ran Samsung's own performance benchmark in its Magician software tool, the 960 Evo did in fact hit a 3328MB/s sequential read and 1925MB/s sequential write speed, so it's certainly capable of producing some astonishing results under the right circumstances.

Of course, sequential tests don't really provide the best picture of an SSD's overall speed day-to-day. Normally, SSDs have to read and write data from all over an SSD's storage, which makes AS SSD's random 4K test a much better indicator of everyday performance. Here, 1GB of files are read and written to random locations on an SSD's storage in small 4K chunks. 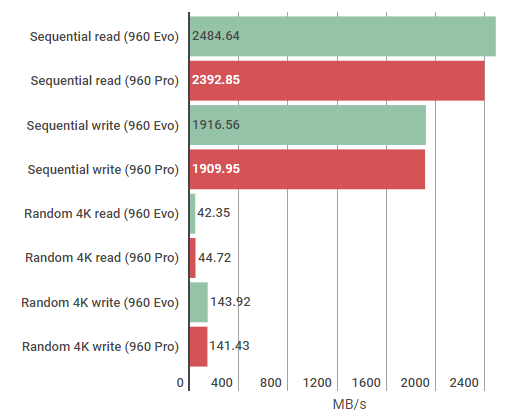 The 960 Evo also held up well in CrystalDiskMark's strenuous 4K 8-queue-8-thread test, too. This is the kind of workload you'd expect to see on a server or workstation, but the 960 Evo handled it all beautifully, producing a read speed of 1635MB/s and a write speed of 1473MB/s.

In fact, the 960 Evo either outperformed or came in just behind its more expensive sibling, the 960 Pro, in almost every test I threw at it (which you can see in the graph above), making the Evo a much more competitive SSD despite a couple of shortcomings. Indeed, the only slight irritation about the 960 Evo is that its warranty only covers three years as opposed to the five years you get with the 960 Pro. Its endurance rating isn't as high as the 960 Pro, either, but 100 terabytes written (TBW) for the 250GB version, 200 TBW for the 500GB model and 400 TBW for 1TB owners is still pretty standard considering it came out around eighteen months ago.

All in all, the Samsung 960 Evo is a pretty tempting SSD. It's a huge leg up over traditional 2.5in SATA3-based SSDs, and much better value for money than the 960 Pro. It also looks a heck of a lot neater inside your PC case, too, as it slots right into your motherboard without the need for any extra cables. Just be aware that the 960 Evo doesn't come with a mounting screw in the box, so you'll need to buy one separately in order to fix it onto your board. While not technically necessary, it's probably safer to have it secured than flapping around in the breeze. As long as you've got the right motherboard, then, the Samsung 960 Evo comes highly recommended.