Samsung's 980 Pro NVMe SSD is the company's first foray into the world of PCIe Gen 4, the new super fast storage standard that's set to become the baseline for all modern gaming PCs going forward. It's still relatively early days for PCIe 4.0 at the moment, though, and you do need a compatible motherboard to get the most from it. As a result, the 980 Pro's appeal may be rather limited at this point, especially if you're not planning on upgrading your PC any time soon. However, as a sign of things to come, the Samsung 980 Pro sets a high bar, offering best in class random read and write speeds compared to its other PCIe 4.0 rivals, and best of all, it doesn't require a chunky heatsink to get the most from it, either.

The latter in particular was a big problem when I tested Gigabyte's Aorus NVMe Gen 4 SSD last year, as its bulky copper heatsink often didn't fit with the array of X570 motherboards I had at the time for testing AMD's 3rd Gen Ryzen CPUs. Indeed, many X570 motherboards come with their own heatsink solutions these days, making the Aorus NVMe Gen 4 feel quite wasteful - especially when its entry-level 1TB model started at a whopping £290 / $260 when it first came out.

Thankfully, prices for the Aorus have dropped to £165 / $200 in the intervening year, but it's still quite expensive compared to other 1TB NVMe drives, and you've still got that chunky heatsink to deal with. It's a similar problem you'll find on Corsair's MP600 SSD and Sabrent's Rocket NVMe 4.0 drives, too.

Samsung 980 Pro review in a nutshell

Samsung's 980 Pro is a barn-storming SSD, offering as much of a performance jump from existing PCIe 3.0 drives as you get from moving from SATA to NVMe. It is, however, quite expensive, and will almost certainly be outmanoeuvred by the inevitable 980 Evo.

Happily, the Samsung 980 Pro is both more flexible and more practical than its rivals when it comes to cost and installation. The heatsink simply isn't an issue, for starters, so you can slot it into any M.2 slot without worrying whether it's going to fit or not. It also comes in a wider range of size capacities starting from 250GB. A larger 2TB version is also due to arrive before the end of the year.

That's quite a bit more than my current favourite NVMe SSD recommendation, the £48 / $40 250GB WD Blue SN550, and it's quite a big step up from Samsung's own 250GB 970 Evo Plus, which can currently be had for £64 / $70. Both of these drives only support the existing (and slowly outgoing) PCIe 3.0 standard, of course, but right now it still feels like you're paying quite the premium for that extra bit of future-proofing.

Admittedly, I was only able to reach these top speeds using the performance benchmark in Samsung's own Magician software, as running the same test in my usual AS SSD benchmark only returned sequential scores of 5507MB/s read and 3979MB/s write. That's still pretty impressive, though, as while the latter is about on par with the Gigabyte Aorus, the 980 Pro's sequential read speed was more than twice as fast as the Aorus' 2343MB/s result.

Of course, sequential speeds aren't really the best indicator of everyday read and write performance, as most of the time your SSD is fetching and chucking bits of data all over the shop rather than looking at things in nice neat lines. Instead, it's an SSD's random read and write speeds that are more in line with what you'll see day to day, but even here the 980 Pro continues to excel.

While not quite as sexy as the many thousands of MB/s you'll see in the sequential arena, its score of 79.2MB/s read and 178.9MB/s write in AS SSD's 1GB random 4K test is still the best I've seen from any NVMe drive. The Aorus only managed 65MB/s read and 152.7MB/s write, for example (and that was both with and without its big heatsink), putting the 980 Pro ahead by 22% on read speed and 17% on write speed. 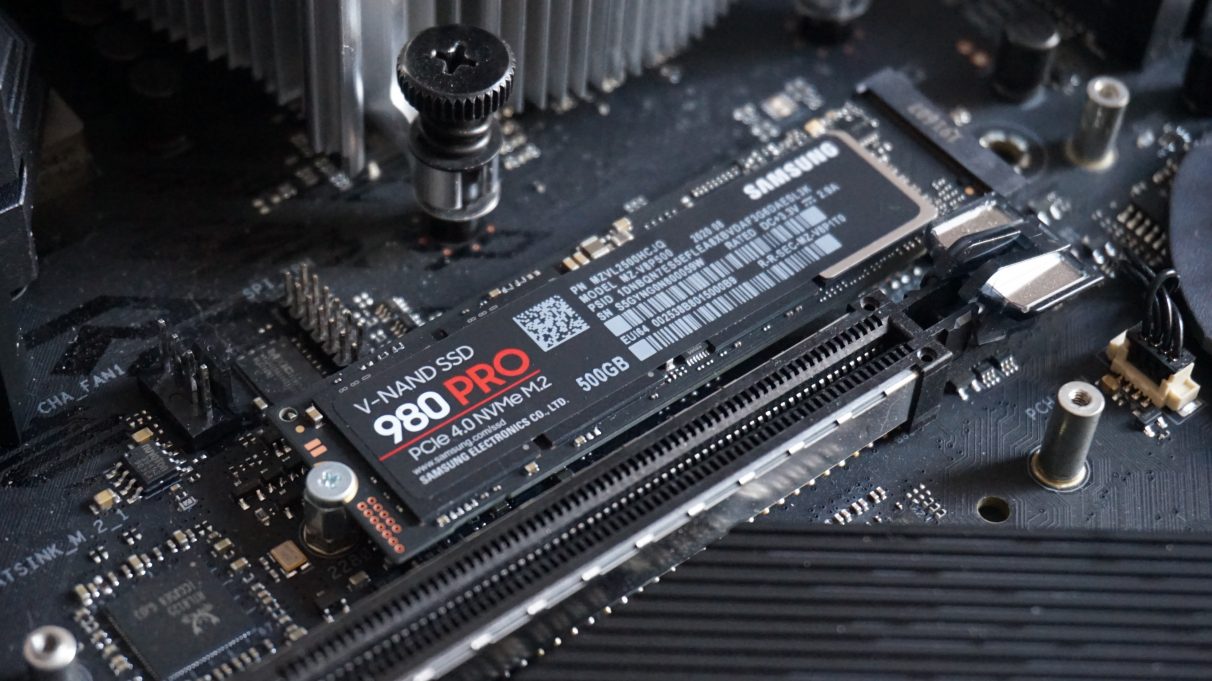 When viewed in those terms, the 980 Pro's higher price is a bit more understandable. After all, it's the same kind of hike you still see today between the SATA and PCIe 3 NVMe drives. It might sound like a lot at first glance, but it also reflects the jump in performance you get as a result.

However, as impressive as the 980 Pro is right now, what I'm really interested in is seeing what the almost certainly inevitable Samsung 980 Evo is capable of by comparison. Samsung's Evo drives have always tended to be the cheaper, better value option next to their top of the line Pro SSDs, and I'd be very surprised indeed if we didn't see an 980 Evo arrive as well before too long. It might be next year at this point, admittedly, as Samsung haven't made any official announcements about it yet, but even if we do end up waiting a few months for it, we'll also have a much better idea of when we can expect Intel to get on the PCIe 4.0 bandwagon alongside AMD by then, as well as (hopefully) a bit more competition from the likes of WD, Crucial, and Adata.

At the moment, it looks like Intel will be introducing PCIe 4.0 support in their next crop of 11th Gen Core CPUs, but you never know if they'll suddenly change their minds again like they did with their recently released 10th Gen Comet Lake CPUs, which had their PCIe 4.0 support pulled from the platform shortly before launch. AMD, on the other hand, have offered PCIe 4.0 compatible CPUs, motherboards and graphics cards ever since the launch of their 3rd Gen Ryzen chips and RX 5000 Radeon GPUs last year.

As a result, while the Samsung 980 Pro is an absolutely barnstorming SSD when it comes to read and write performance, I also wouldn't advise making the jump just yet unless you've already got a recent AMD-based PC and are absolutely desperate for the latest and greatest. It's one of the best gaming SSDs you can buy right now, don't get me wrong, but there's a very strong chance its inevitable Evo sibling will end up being the better buy overall.