If you thought the WD My Passport SSD was a dinky external SSD, the Samsung T5 really takes the cake. Measuring just 74mm tall, 57mm wide and 10.5mm deep, the T5 is almost exactly the same size as a small box of matches. Weighing a featherweight 51g, it's exceedingly light, too, its cool metal chassis putting bigger, bulkier external hard drives to shame.

This is external storage done right. The only problem is that you'll have to pay through the roof for the privilege.

This rather nice blue one I've got here is actually one of two colours available on the T5: those after a 250GB or 500GB model get this snazzy shade of turquoise, but the larger 1TB and 2TB versions are only found in boring old black. A shame, really, as a dash of colour makes a welcome change from all the other black boxes that are constantly vying for precious desk space. 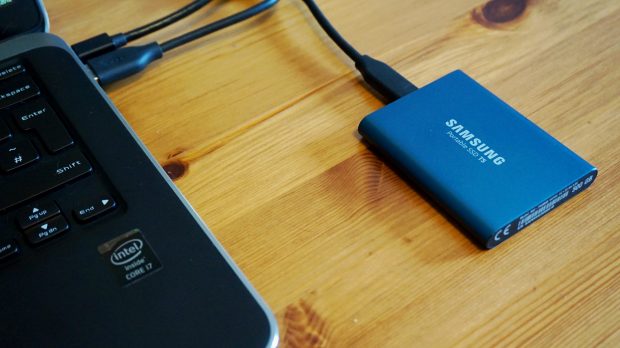 Is it worth paying extra? It all rather depends on what you're going to be using it for. For instance, Samsung claim the T5 is capable of transfer speeds up to a massive 540MB/s when using its bundled USB Type-C cable, which is around 4.5% faster than the WD's claimed transfer rate of 515MB/s and almost as fast as some of the best SSDs you can get that go inside your PC. There's also a USB-C to USB3 cable in the box for non USB-C devices much like the WD My Passport, but otherwise you're getting pretty much the same kind of protection package, which includes a three-year warranty, 256-bit AES hardware encryption and shock resistance up to two metres in case you happen to drop it.

Now my laptop and PC don't support USB-C, so I tested both the T5 and My Passport SSD over USB3. This will naturally put the brakes on each one's data speeds slightly, but even then you're still looking at some pretty fast transfer rates.

In AS SSD's copy benchmark, for instance, which involves a drive reading and writing files simultaneously, the T5 was pretty much neck-and-neck with the WD My Passport SSD, as you can see in the graph below. This test involves transferring three different file types from the OS onto the drive - an ISO folder comprising of two large files, a programs folder with lots of little files, and finally a game folder that's made up of both big and small files. 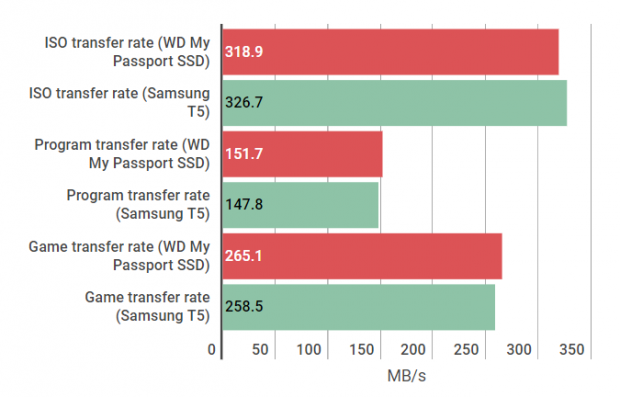 Here, the T5 just edged ahead of the My Passport in the ISO test with a transfer rate of 327MB/s, but fell behind it in the Program and Game test. In fairness, though, it's unlikely you'll notice the difference in day to day use, as we're talking a difference in speed that comes down to mere points of milliseconds. The difference between 148MB/s and 152MB/s, it turns out, is just 0.25ms, according to the benchmark's internal timer. As for 259MB/s and 265MB/s, it's even less, coming in at just 0.13ms.

In this sense, there's absolutely no reason to pay so much more for the T5 over the WD My Passport SSD. However, if you're after a drive for getting loads of files off a PC or laptop all at the same time so you can upgrade to a new machine, or something for organising files on like a regular internal drive, then the T5 may just have the edge.

In AS SSD's normal reading and writing tests, for instance, its random 4K speeds were much higher than those of the My Passport, as it was able to read files at 24.5MB/s and write them at 40.1MB/s. The My Passport, on the other hand, only managed 21.3MB/s read and 25.9MB/s write. 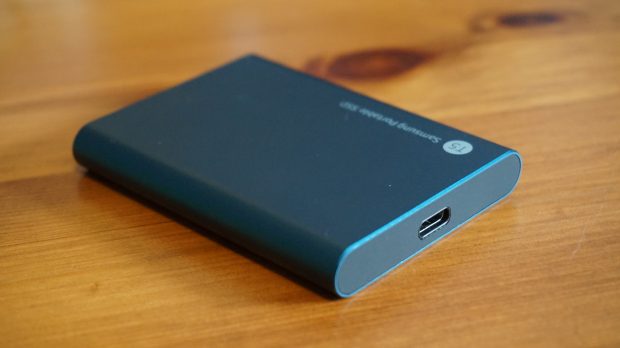 Admittedly, the latter test is more representative of the type of workload you'd see on a server or workstation, so it's unlikely you'll ever put either external SSD under this kind of pressure. However, if you're regularly working with lots of large video files, editing giant batches of photos, or like backing up your entire Steam library in one go for some reason, then the T5 is arguably going to get the job done a lot faster than the My Passport.

In this light, anyone averse to thumb-twiddling may think it's worth spending the extra money on getting the T5. Personally, I think I'd rather get the WD My Passport and save that cash for something else, regardless of the difference in speed. CrystalDiskMark results aside, its reading speed is pretty much identical to the T5 across the board, and I'm willing to set aside its slightly slower write speed due to it being so much cheaper. Of course, the T5 has a slightly easier ride if you're thinking of getting one of the 500GB models, as any difference in price is so minuscule here that there's really no reason not to get the T5. In all circumstances, though, the WD My Passport is by far the better value for money SSD.