If you click on a link and make a purchase we may receive a small commission. Read our editorial policy.
Satisfactory review
A first-person industrialism sim that sees you wrestling with machinery on an alien planet to create the perfect factory.

There it is, the trans-planetary pipeline. One long tube of metal scarring a rural alien planet. It brings coal and water to my power stations, and electricity to my factories. It has taken a day of planning, construction and pumping. Now, the pipeline stands before me, a snaking behemoth of energy consumption. Suddenly, a thought comes. Why didn't I just build coal stations next to the vein? I could have stretched a cheap wire across the planet, instead of a kilometre-long death pipe.

This is Satisfactory, a cracking first-person factory-builder that's been in early access on Epic for a while. It's coming to Steam today, so RPS management dispatched me to inspect the game's machinery and ruin the extraterrestrial idyll with smog and incompetence. They sent the right person.

Imagine if somebody shrunk you and injected you into Factorio to oversee things close-up. That's basically what Satisfactory feels like to play. You're a corporate peon, sent to fill the blue skies of this virgin world with smoke and its grasslands with machinery, all painted a garish bulldozer gold. 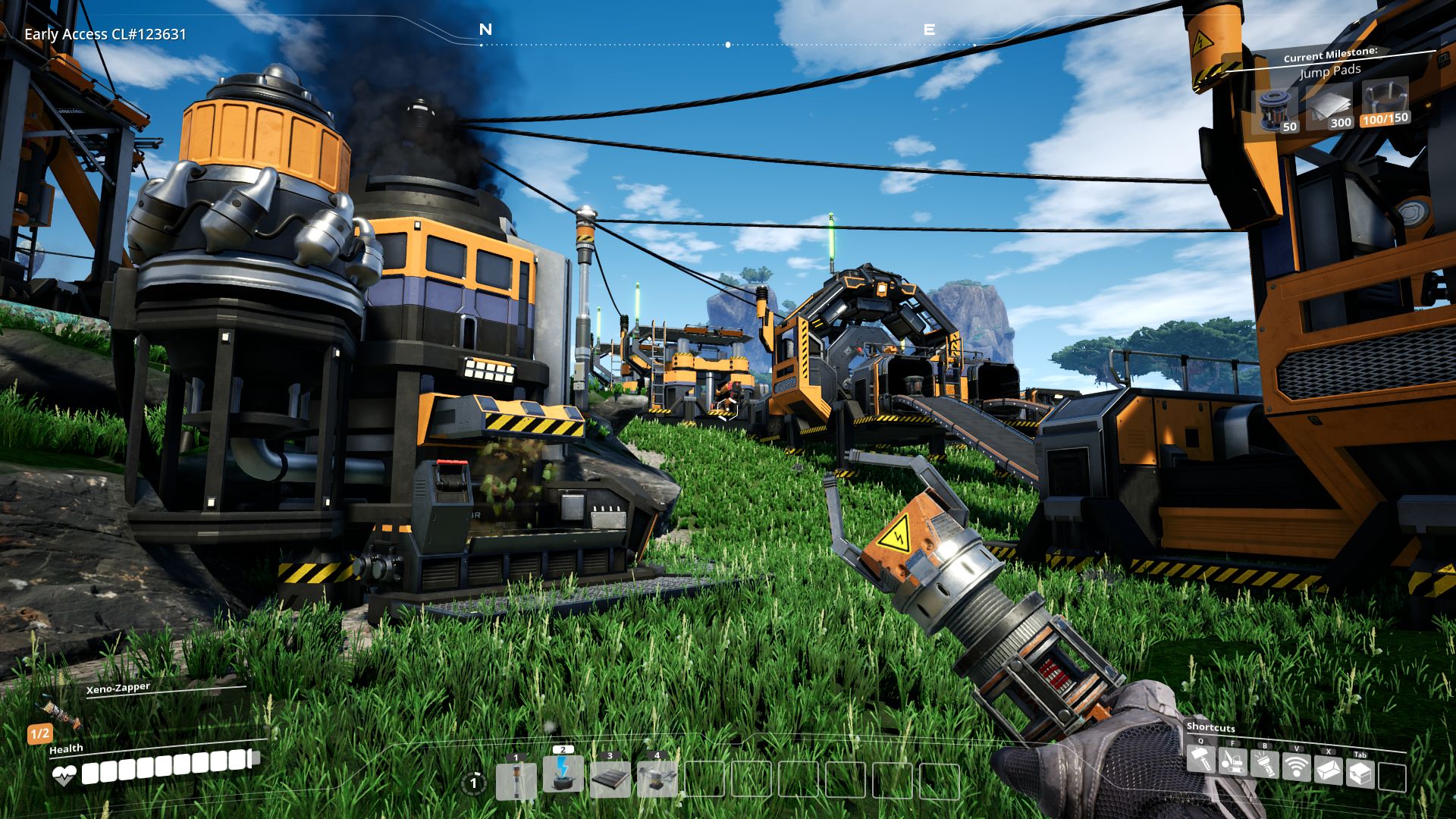 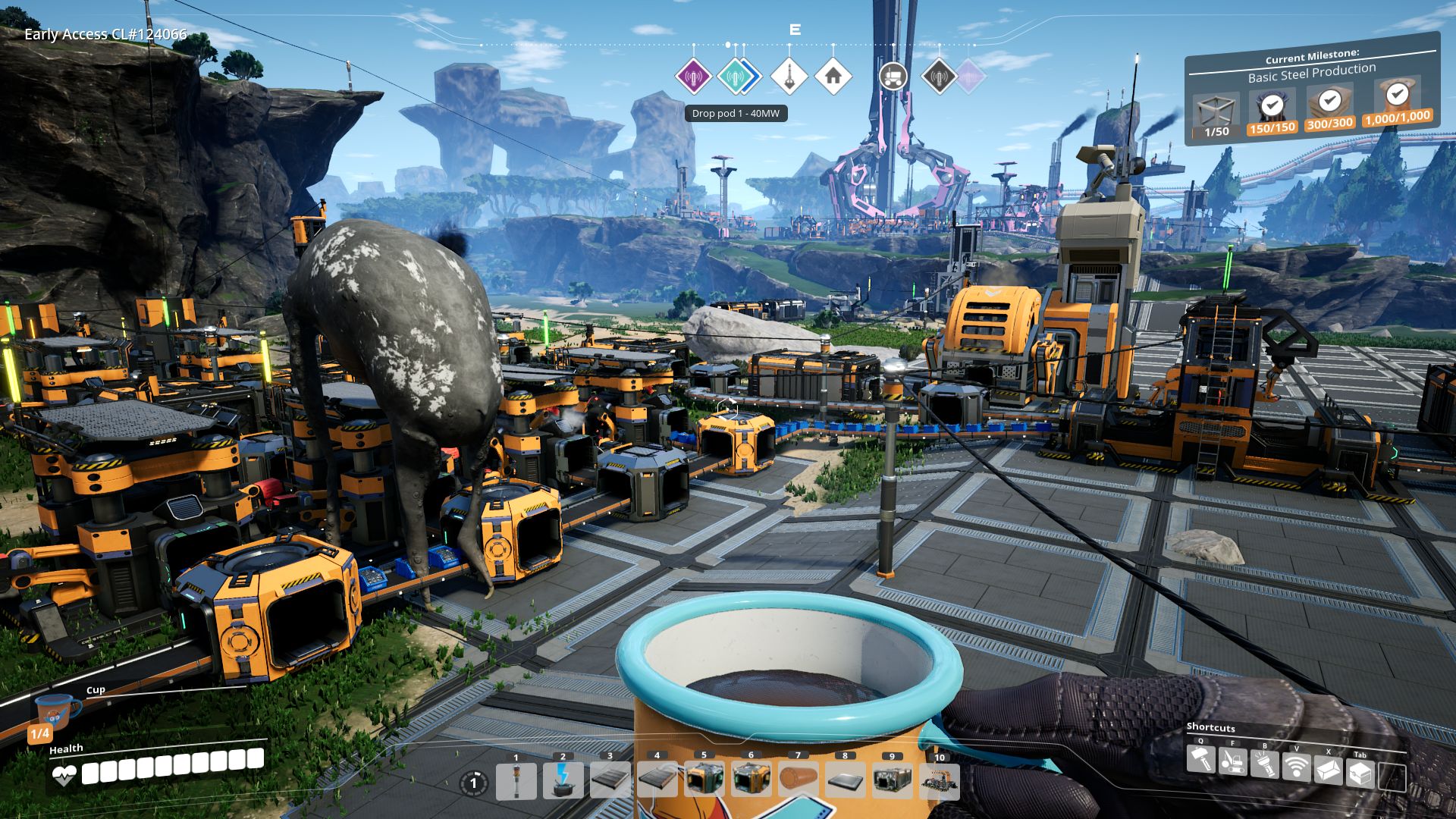 At the end of an assembly run, you send finished components up in a space trolley, back to the corporation. Which unlocks the next bunch of buildable components. But you need to power your machinery somehow, which is where the eco-murder really comes into its own. You start out by collecting leaves from hedges and feeding them into a biomass burner. Soon you unlock new means of compacting that biofuel, until you have a well-oiled larvae of a factory, powered entirely by shrubbery. There is alien wildlife roaming the planet too, some friendly, some not, and you will make the inevitable and troubling discovery that their minced-up internal organs provide some of the most energy-rich biomass available. I won't tell you what to do with this information. I am simply offering it as a matter of transparency. 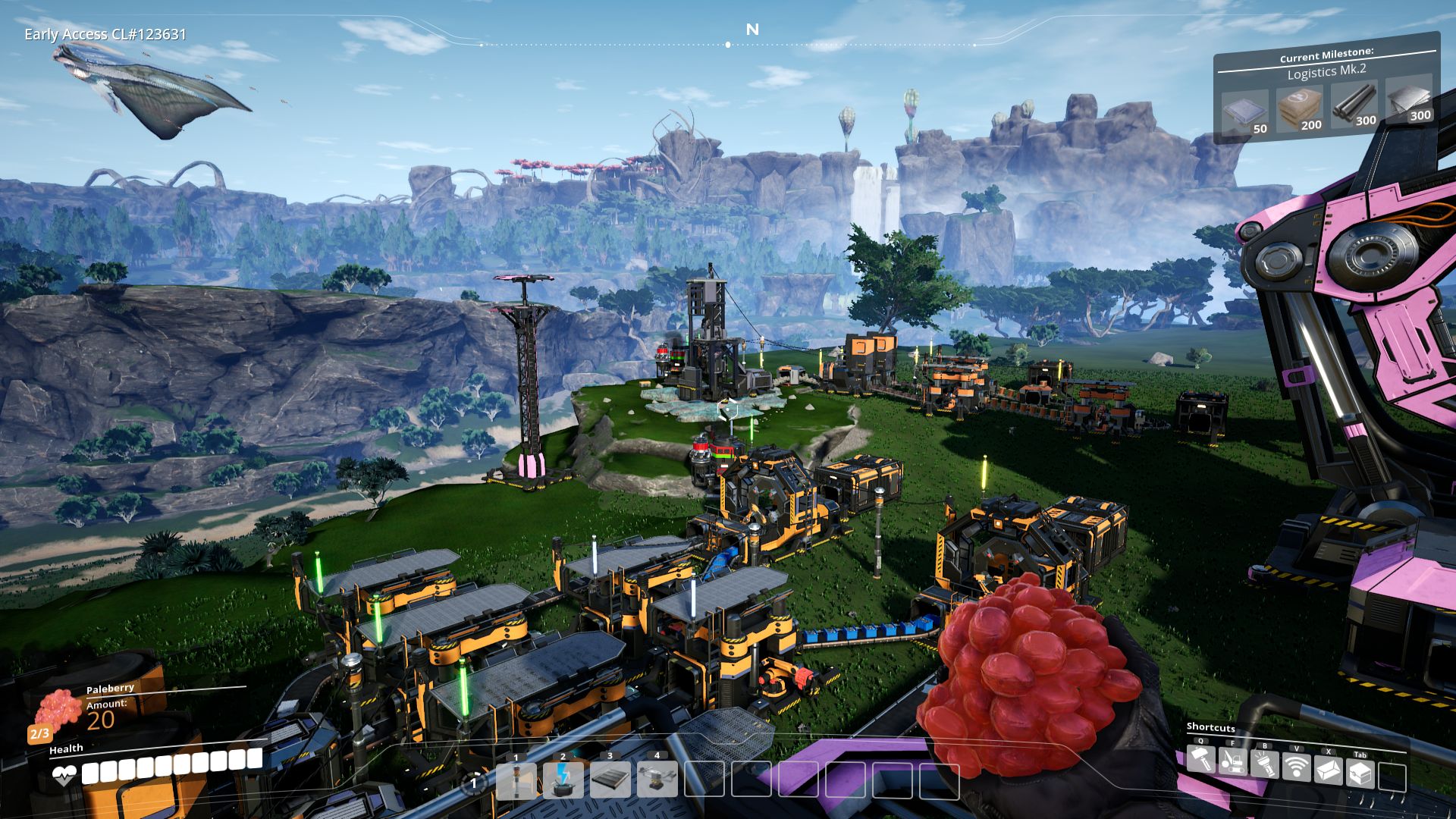 Everything gets connected by conveyor belt and electric wiring. This is all in first-person but it is so in debt to traditional factory sims that you can build overview towers with which to view everything from on high, snipping and tinkering with your factory layout from above. As if you had not been miniturised and put inside SpaceChem after all. You will see from up there, the little green bars that light up beside each machine, letting you know each is functioning as expected, until suddenly, BWOOOoooom. Half of the lights turn red. You gurn and leap down to discover the problem, hurting yourself and gulping down a wild berry to restore health. Is it another power failure? No biofuel in the burner? A tripped fuse? Empty water pipes? Work, damn you, work! 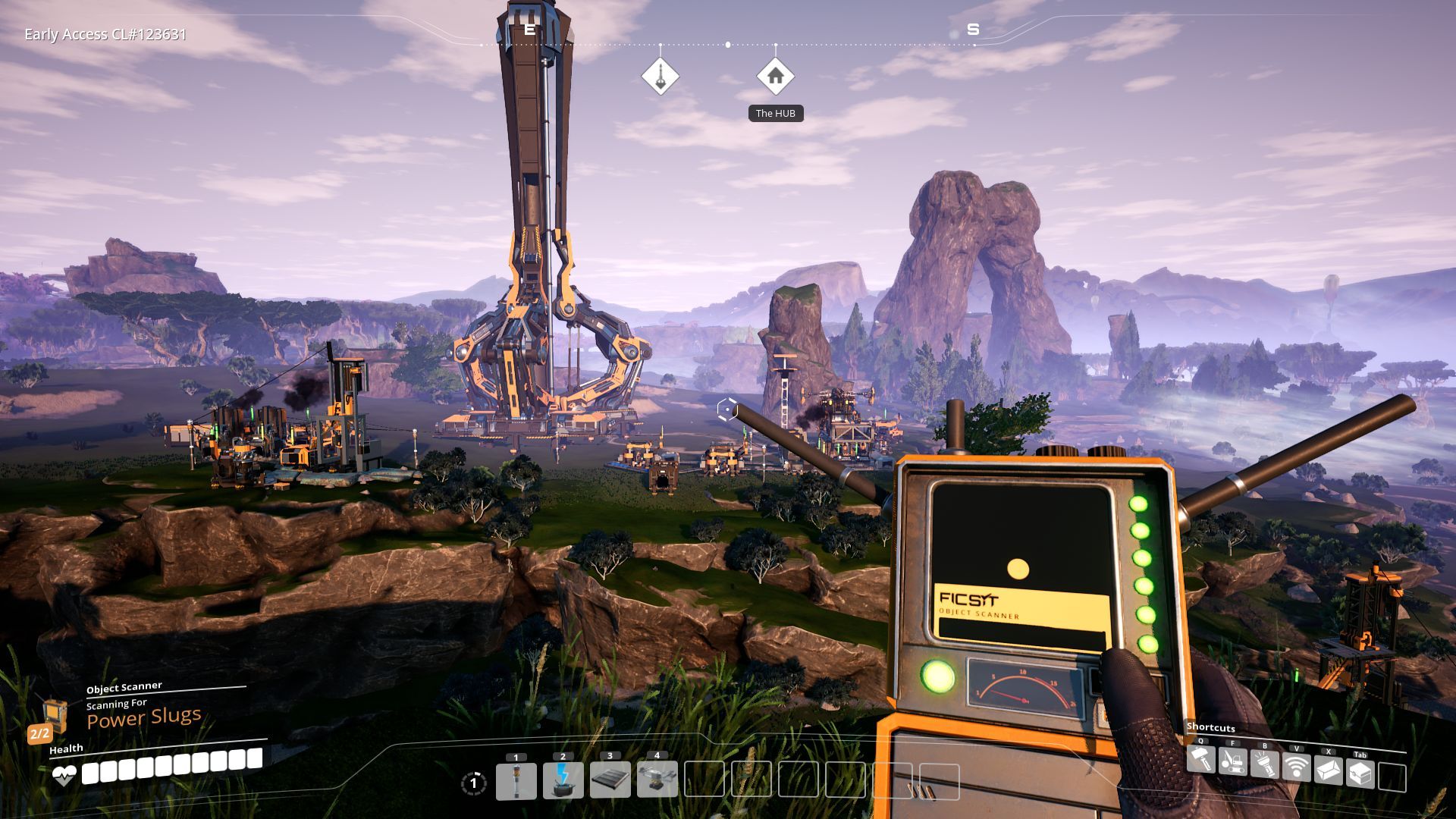 If this makes it seem complex, yes, it can be. Machines have efficiency displays, they have specific power demands, they sometimes have special levers and components attached to their UI screen. They can be overclocked by inserting special boosty batteries (the batteries are made from slugs). Everything can be twiddled and tweaked to make an assembly line run with utmost efficiency, or even slowed down to half speed, to make output steadier and avoid clogged conveyor belts. But the opposite is also true. You can, like me, play the whole thing by ear. Make a shitty factory. It's fine. You're the only human on the planet, no one is going to fire you. 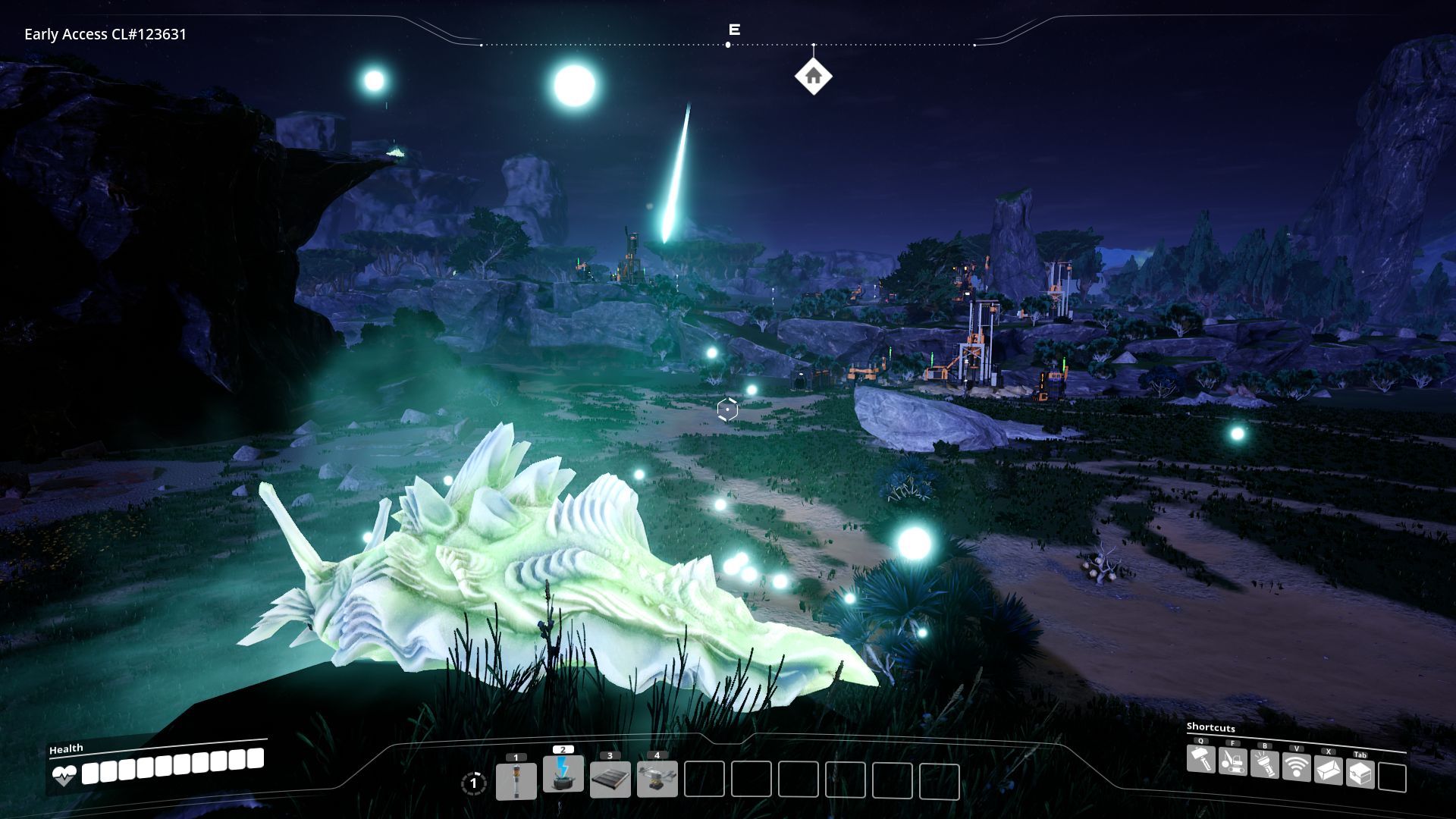 At least, so long as you're not in multiplayer. Here the amount of bugs and glitches are "considerably higher", say the devs. And there'll be crossplay between Epic and Steam players, they add. I didn't let strangers onto my planet, however, so I can't tell you too much about multi-person factory life. Why you'd want an interloper in a game custom-made for control freaks, I do not know. Get off my smog rock.

Some of my favourite moments have been spent alone, away from the machines, exploring the planet's caves and pits, the canyons and jungles. There are swampy gas plants, skittering cave spiders, hidden alcoves filled with Energizer slugs. There is the exploratory satisfaction of wandering into an ancient meteor crater and getting ambushed by a giant fire-breathing quadruped. The excitement of planting a beacon in the earth and marking it "horrible forest here", then returning hours later with a chainsaw. 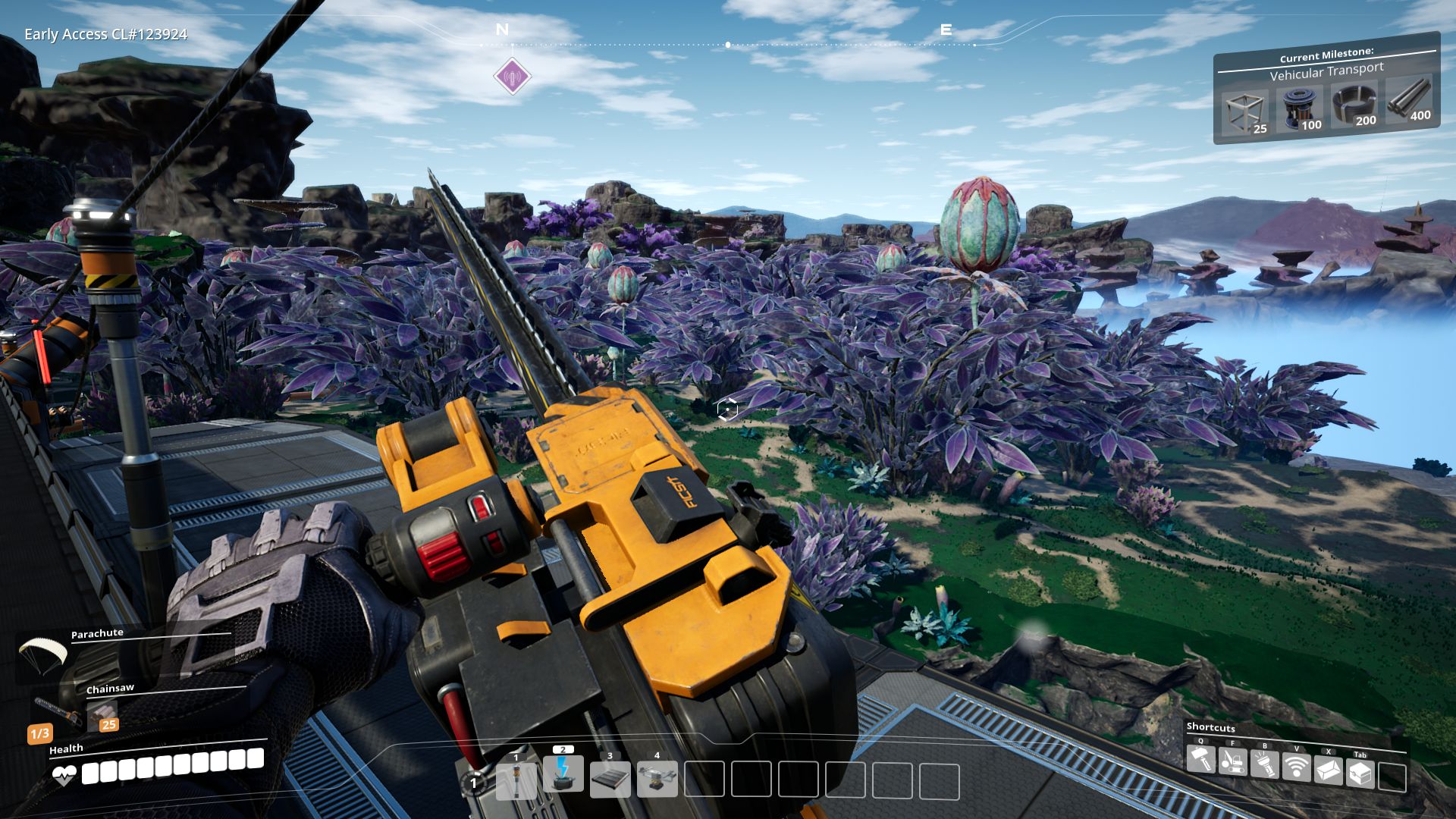 All this I adore. Yes, you're here to destroy an entire world's eco-system. But you should at least watch a pink sunset before you do that. It is a very knowing simulation of planetcide, smirking at its own industrialist-poking humour, with cartoon mascots and a little shop you can build that only accepts its own corp-o-currency, paper cash that is essentially the inflationary tickets you get at funfairs. When your body is battered by an aggressive alien shellwolf and your health drops, a warning flashes up: "Damage to FICSIT property detected." 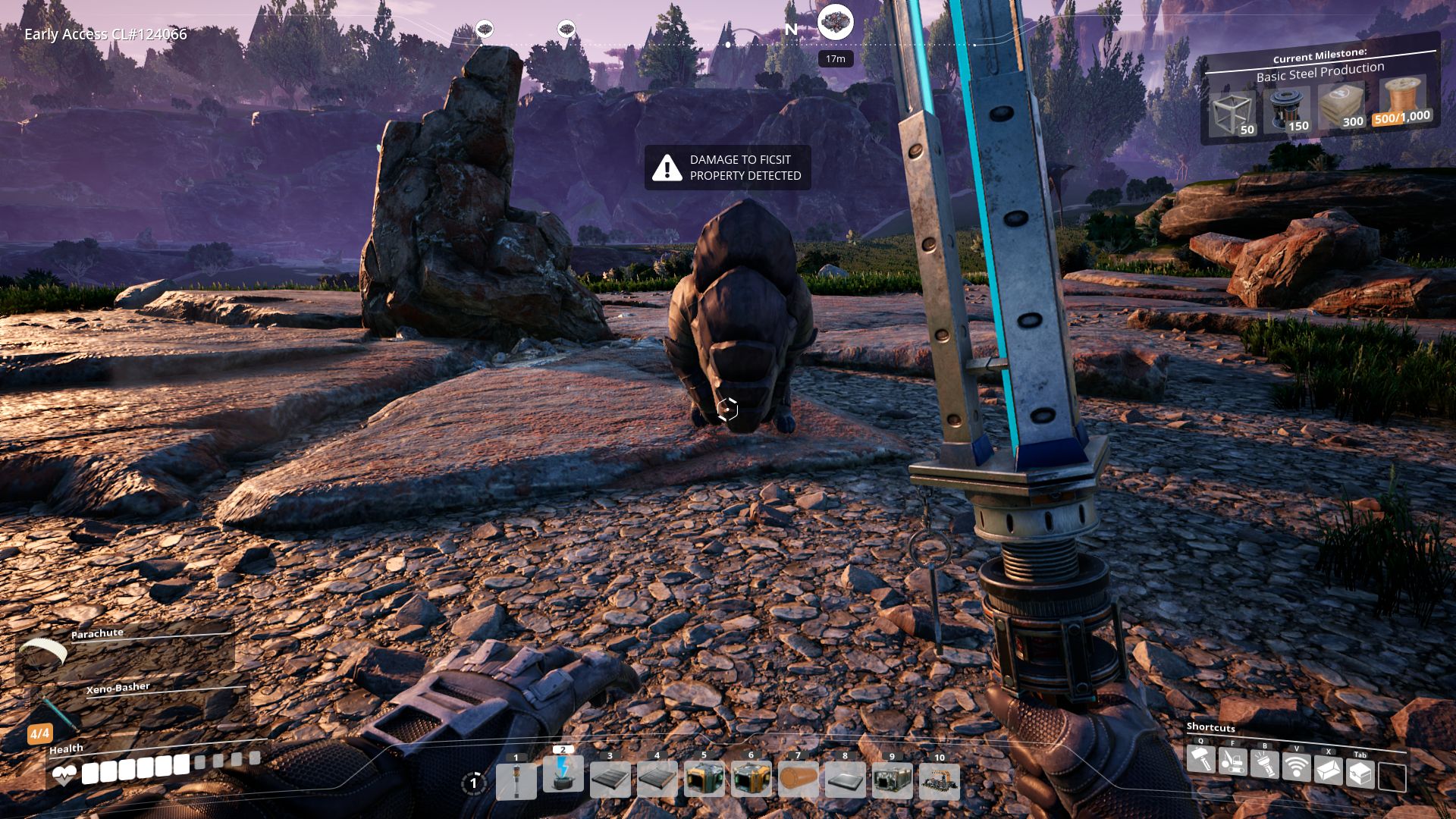 There is a strong whiff of Subnautica to it all, if Subnautica had its design document seized and altered by a pantomime Victorian magnate. The tone is similar, right down to the peppy corporate robo-voice that guides you through the tutorial. It has the chimey space music, the cycle of discovery, it even has the odd burst of pop-in textures. That's some real flattery. But most importantly, it has lumbering, harmless beasts with whale-like bellies who greet you with a booming but gentle gargle. 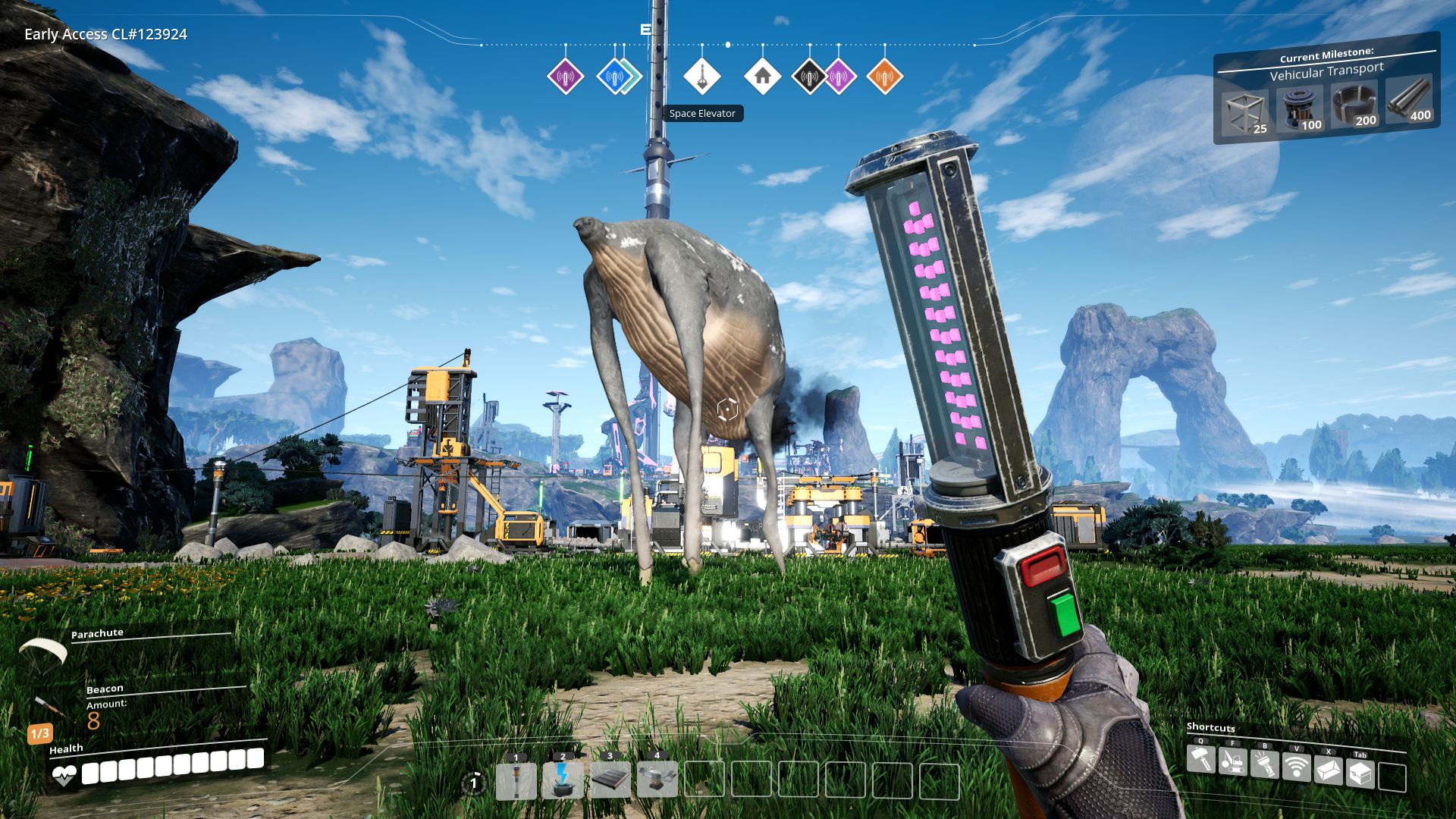 This smokestack 'em up may be the seafaring survival game's spiritual opposite, a game of exploitation and resource pillaging, but it knows that, and it wants you to feel at least a little bad about what you're doing. Why else would the creators fill the valleys with fascinating wildlife and gorgeous natural splendour? It is the prettiest first-person cookie clicker I ever done clicked.

There is a touch of fiddliness when it comes to building, but nothing crippling. Corpbot suggests embracing "verticality" when building, layering constructors and conveyors atop one another to make efficient use of space, but this is easier robo-said than human-done, and often ended with me running around trying to get the right angle to place something down just right. There is a handy "snap to guidelines" feature which helps you build in straight lines, but sometimes it didn't want to play nice. It takes practice to plop tidily, and I haven't done enough. I can already feel the scorn radiating from seasoned players who look at these screenshots and gag at the lack of foundation flooring below my machines. The dearth of right angles and order. But like I say, they can't fire me. 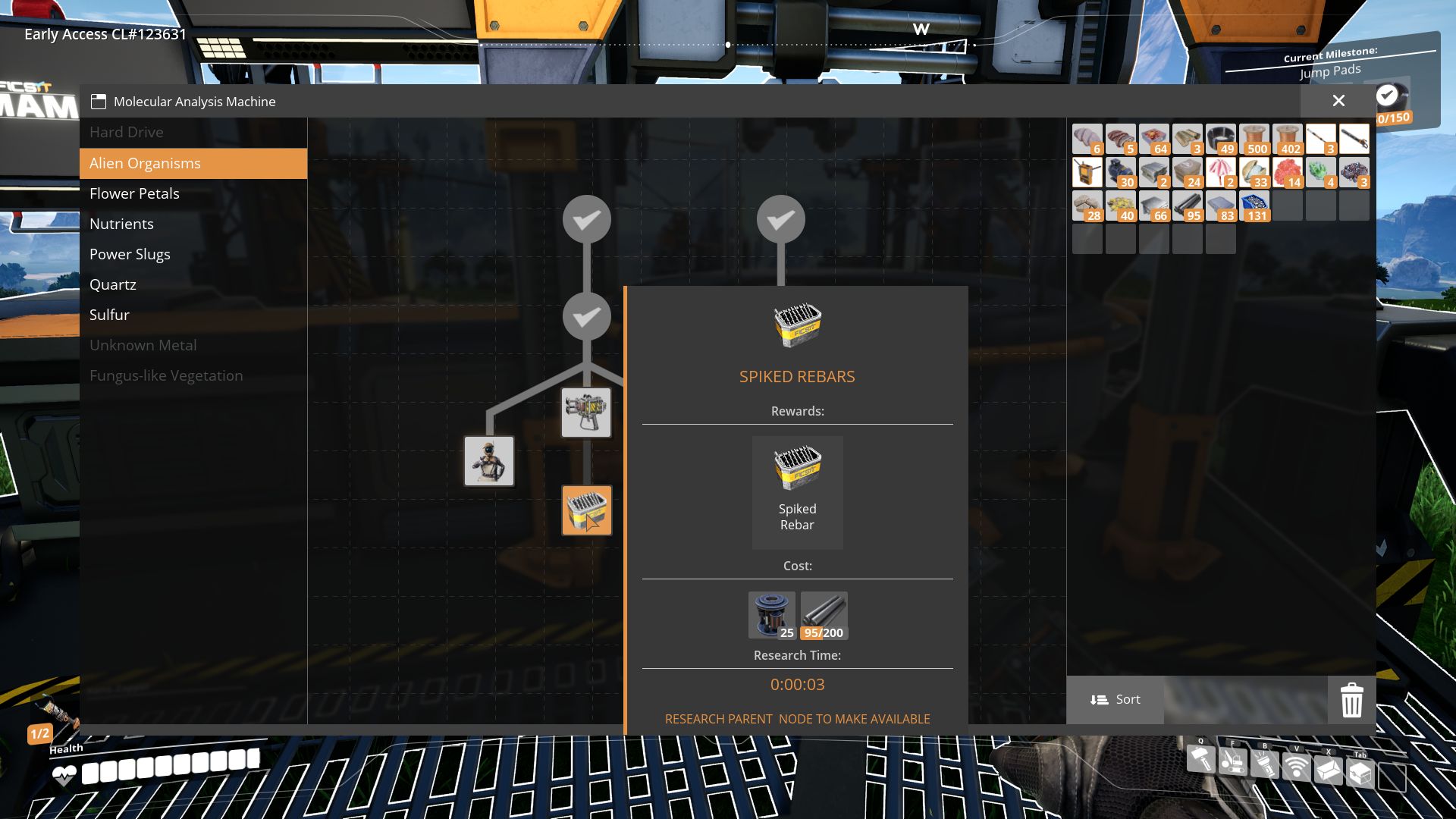 There are also useful hidden features. For example, you can press Alt and scroll your mouse wheel to swap between 10 hotbars, all customisable. You can scroll your mouse wheel when building a conveyor belt to make it turn neatly, rather than snaking higgle-dee-piggedy all over the shop. But Corpbot never explicitly tells you those useful things. Or if it did, I missed it during all the BWOOOoooom. I only found out about this sort of thing on YouTube.

Hey! That's probably why I ended up building a needless, kilometre-long pipeline! Yes, that's it. It's the game's fault. I'm not an idiot. I pumped Evian-fresh water from the depths of a verdant forest up to my thirsty coal fields because Corpbot is not currently not good enough. Tsk, tsk, early access. 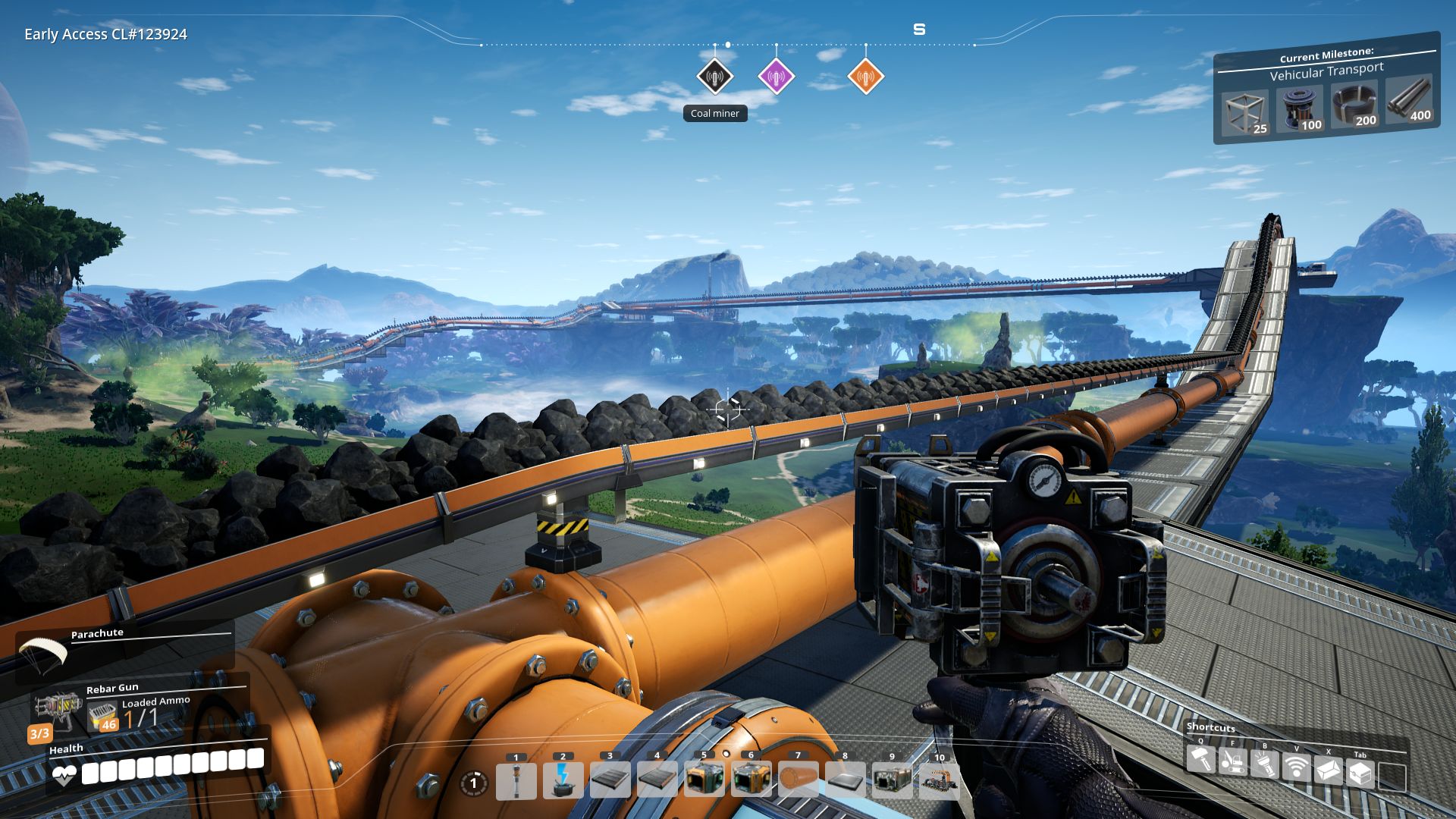 I have other (more reasonable) complaints. Observations is maybe a better word. Namely, how much time it demands. This is to be expected, it's that sort of game, where incredibly useful time-saving devices are locked away, because the reward for unlocking them is saving yourself future-time, the most precious and un-pipeable resource.

There are smart splitter nodes, for example, that let you funnel resources between belts more intelligently. At their most basic, splitter nodes separate resources on a conveyor belt equally, in two or three directions, so having a machine that filters out all of one type of item is astoundingly handy. There are also trains that carry resources across huge distances on rails. No pipeline required! And a nippy buggy for getting across the surface, or at least the crappy ad-hoc roads you lay down. I didn't get to any of that in 20 hours of funlabour, which to me is fine. As the pipeline incident suggests, I'm not the most efficient factory hand and I don't mind ambling along cluelessly, anticipating how much more game there is to savour. But I suspect such time investment might make others sigh longingly and return to homeschooling maths. 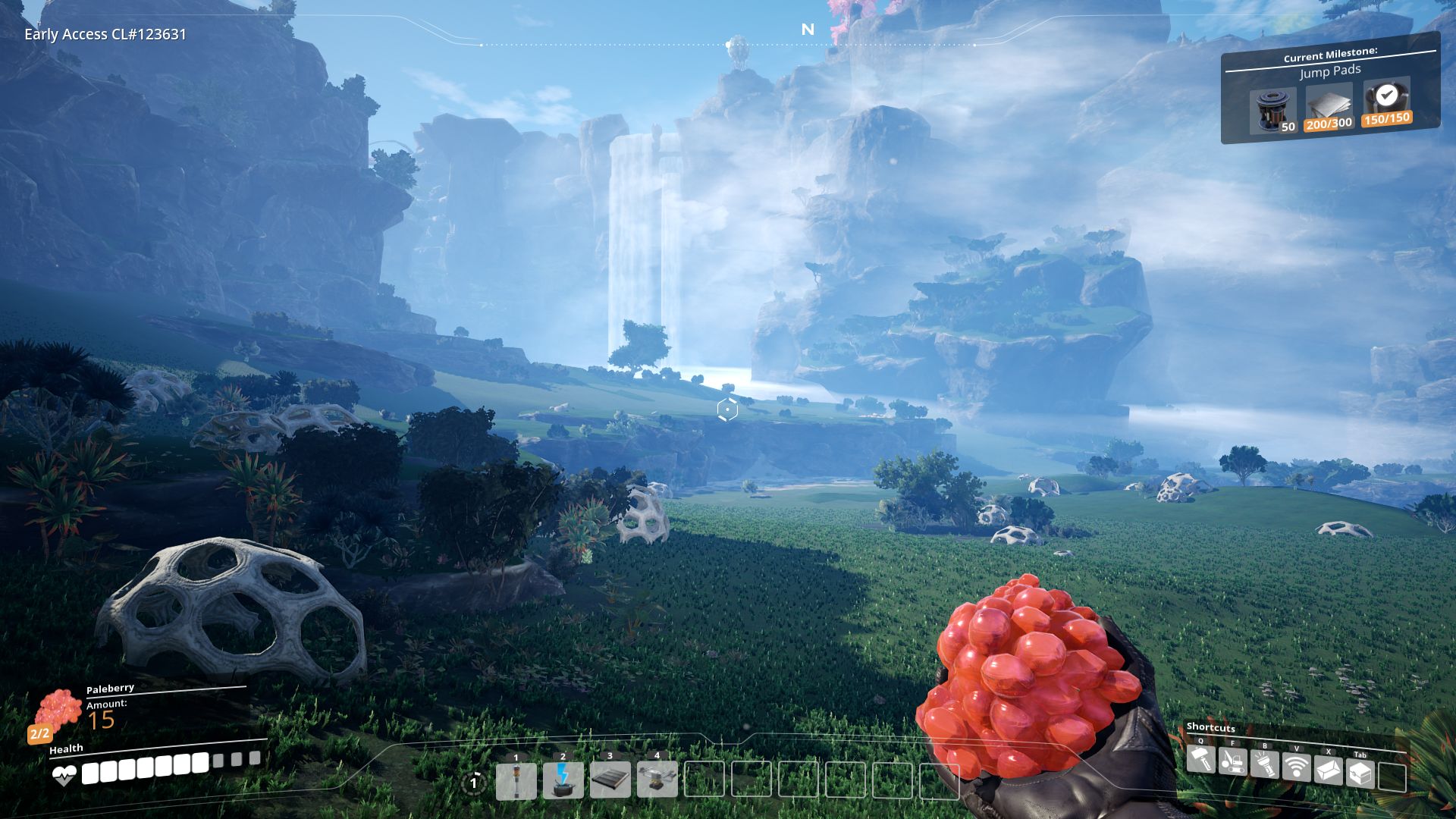 Yet even I could have done with that buggy a little sooner. This is a game all about building your own bespoke systems, and, for better or worse, that includes a transport system. In this early part of the game there are limited options to move across the planet quickly. The seams of coal and copper and various unobtainiums are often distant by design. You can focus on building jump pads, creating your own routes over chasms and hillsides. But I often found myself yearning for a jetpack, for some designer-sanctioned noclip mode that would let me travel from my water plant to the coal fields, to the iron yards and back again. I have since discovered, yes, the game offers you exactly this at some point. A bloody jet pack. I just wish I had it already. 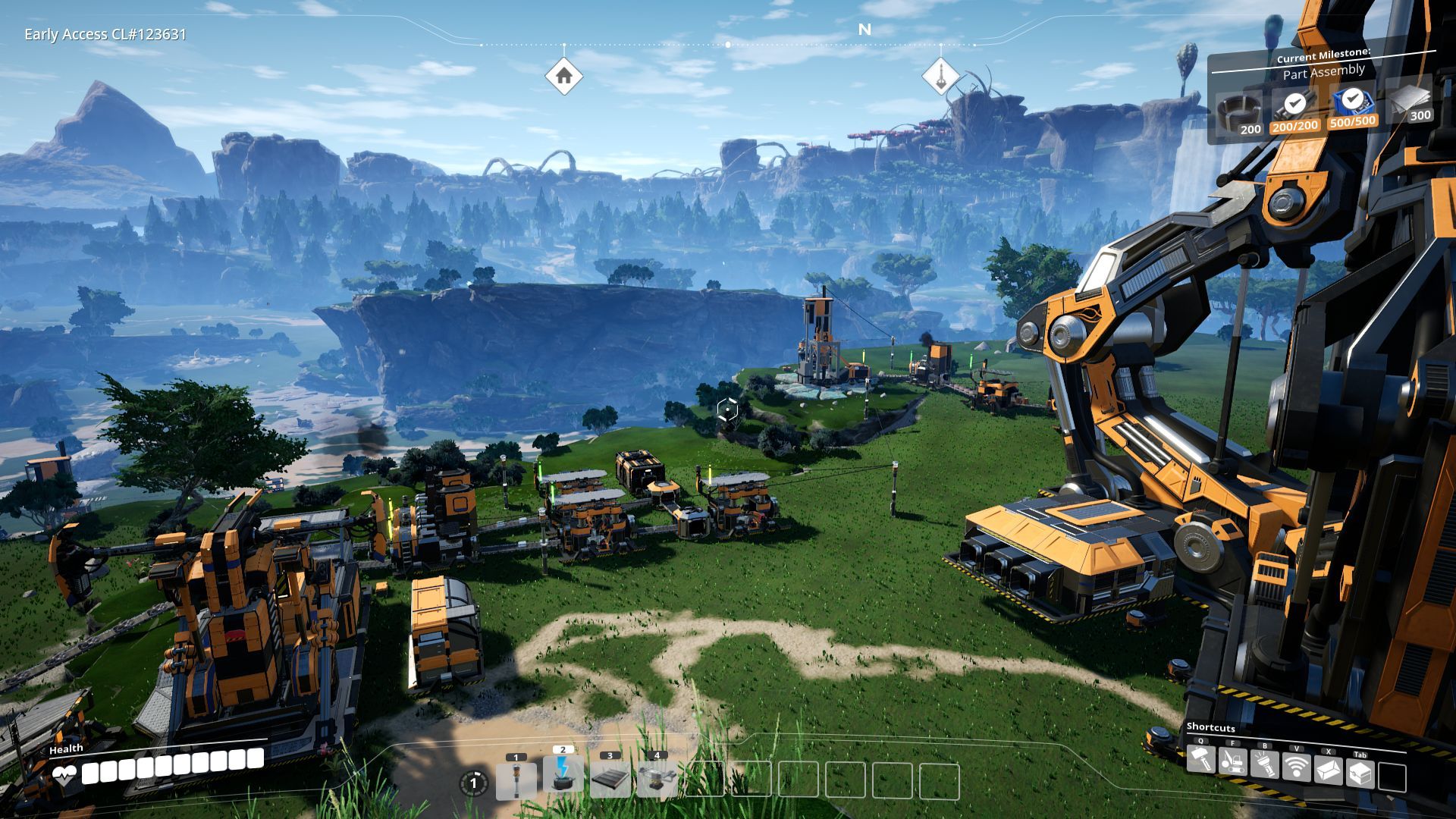 Getting to that point takes time, a resource you cannot suck from the heart of any known slug. If you've already got lots of it, however, Satisfactory will likely fill your days with pneumatic bliss. It is a game about meaning well but soon taking perverse pride in the horrible eyesores you erect over a gorgeous planet. You will succumb to the disease of efficiency, if not the sore tummy of pipelinery. I went from building around the prettiest trees, to deforesting whole jungle plateaus to make way for my aquaduct and automated coal-shovelling system. Humans, I have heard it said, were a mistake. 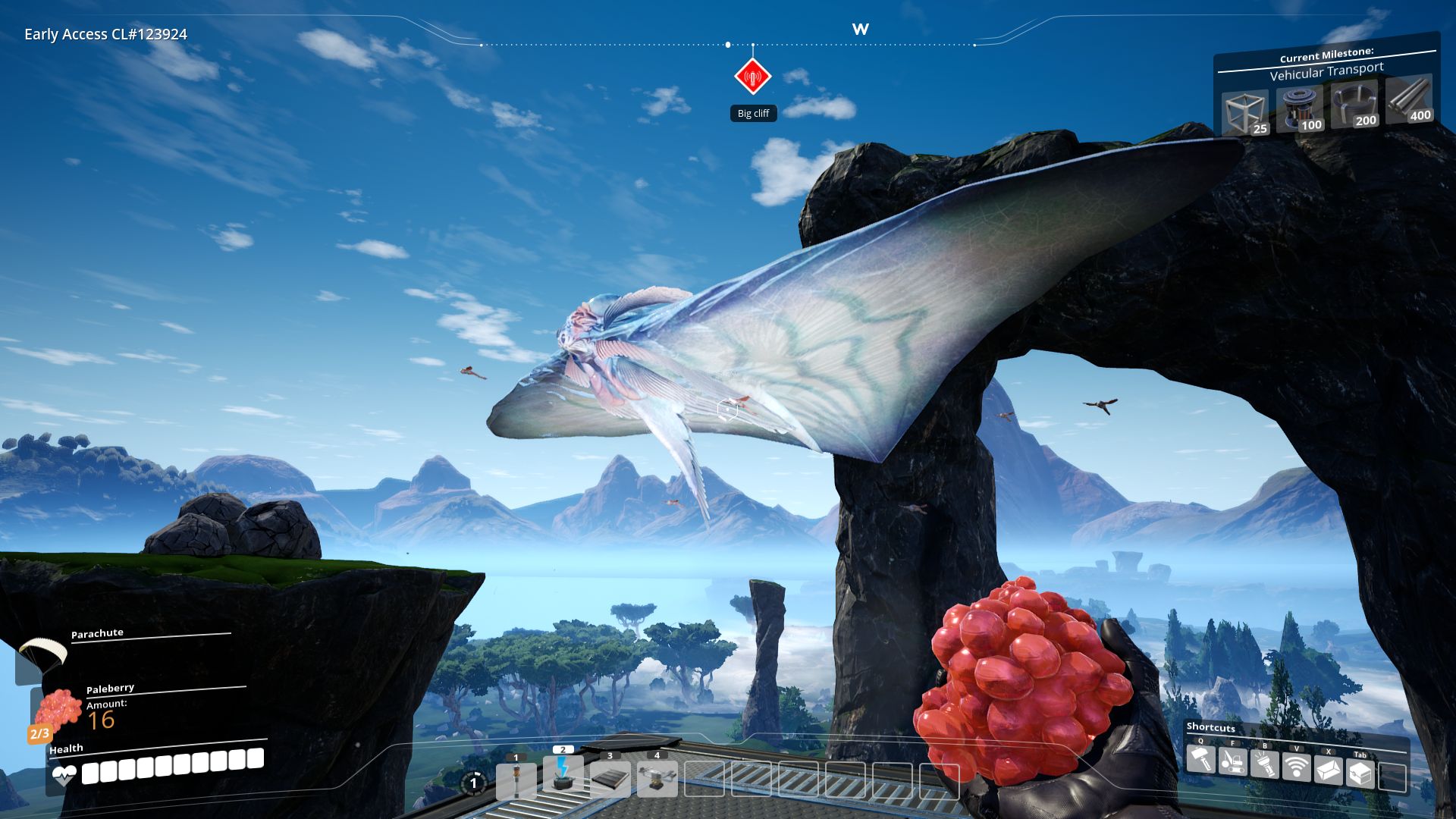 Still, when you see those huge assembly lines, encircling mountaintops like a giant sushi conveyor belt, you'll know they're your crowning achievement. The game's coffee-sipping mascot and punning monkier refers with confidence to these brief moments of pleasure you'll feel when you finish a tumbling mess of machinery and stand atop a tower, nodding with self-approval at the blight you've made on the landscape. I am become factory, the destroyer of worlds.