Good news VR headset deals hunters. Currys' UK Ebay outlet has shaved £60 off the Oculus Rift S, taking the normally £399 headset down to a much more appealing £339. That's even cheaper than it was over Black Friday, making it a great time to snap one up if you're thinking about getting a headset for the launch of Half-Life: Alyx on Monday. Here's how it works.

To get the Oculus Rift S at its lower price of £339, all you need to do is use the promo code PRESSPLAY at checkout (as you can see in the image below). The voucher only lasts until March 22nd (which is Sunday, the day before Half-Life: Alyx comes out), so you'll need to snap it up quick if you want to take advantage of it - and while you're here, be sure to check out Half-Life: Alyx PC requirements guide to make sure you've got everything else you need to get your PC VR ready.

£339 is probably the lowest price I've seen for the Rift S so far, as even its Black Friday deal price only knocked £50 off its usual price, taking it down to £349. 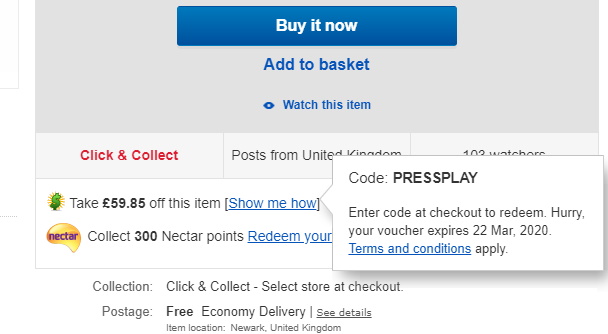 Indeed, the Rift S isn't the only thing that Currys have a deal on right now, as their Ebay store is also offering 15% off a whole range of electronics from phones to cameras and TVs. Alas, there aren't any PC components included in the sale, but there are a couple of other VR headset deals that might take your fancy, as the PRESSPLAY voucher also gets you £60 off the HTC Vive Cosmos and Vive Pro.

That's a decent-ish discount on the Vive Pro (although it did go all the way down to £819 over Black Friday), but you can actually get the Vive Cosmos for a lot less by hopping over to Scan, where you can get it for £579 if you use the link I've just included (it's a special newsletter link that only activates the discount when you arrive on the page through that URL, you see). That's also cheaper than it was over Black Friday, where prices dropped to £599.

It's probably also the cheapest way of working your way towards an HTC Cosmos Elite as well, if you think about it, as the £120 you save by buying through Scan can then be spent on getting the £119 external tracking face plate that puts the Elite in the Cosmos Elite's name. Yes, the standalone face plate has been delayed slightly due to coronavirus-related production problems, so you may have to wait a while before you can complete your ideal VR headset setup, but it does mean you're effectively getting a Vive Cosmos Elite for the price of a regular Cosmos.

Alas, the Oculus Quest still remains out of stock literally everywhere, so there aren't any deals available on that headset at the moment (although to use it with your PC you will need a high-speed USB-C cable), but I'll keep you updated as and when it comes back in stock.