Sea Of Thieves' Ships Of Fortune update is just around the corner, inviting players to join up with their favourite trading companies to earn loads of extra gold and reputation. For the more "traditional pirates" amongst us, a brand new trader has emerged that I think you're going to like - The Reaper's Bones. These are the evil-looking folks that have been hanging out on Reaper's Hideout, and joining up with them will task you with robbing your rival sailors for all they're worth.

But that's not even the best bit! Get out of the way parrots and monkeys, because when the update drops on April 22nd we'll finally be able to have cats as pets!

Before I get over excited about the new kitties, let me tell me about this trader stuff. When Ships Of Fortune drops, you'll be able to become an Emissary for one of the game's trader factions. Once you've joined a company, you'll be able to level yourself through five Grades by doing what that company does best. For example, for the Gold Hoarders this'll be digging up chests, and for the Order of Souls it'll probably be skelly murderin' that boosts your rep. You'll want to get your Grade up as high as you can before cashing in because it acts as a multiplier - so the better your Grade, the more gold you'll earn.

As a representative of your chosen trader, you'll be able to hoist their flag and earn pretty cosmetics to let other players know exactly who you're loyal to. This won't necessarily be a good thing however, as players who choose to become Emissaries for the new Reaper's Bones will be tasked with hunting and capturing the flags of rival factions. 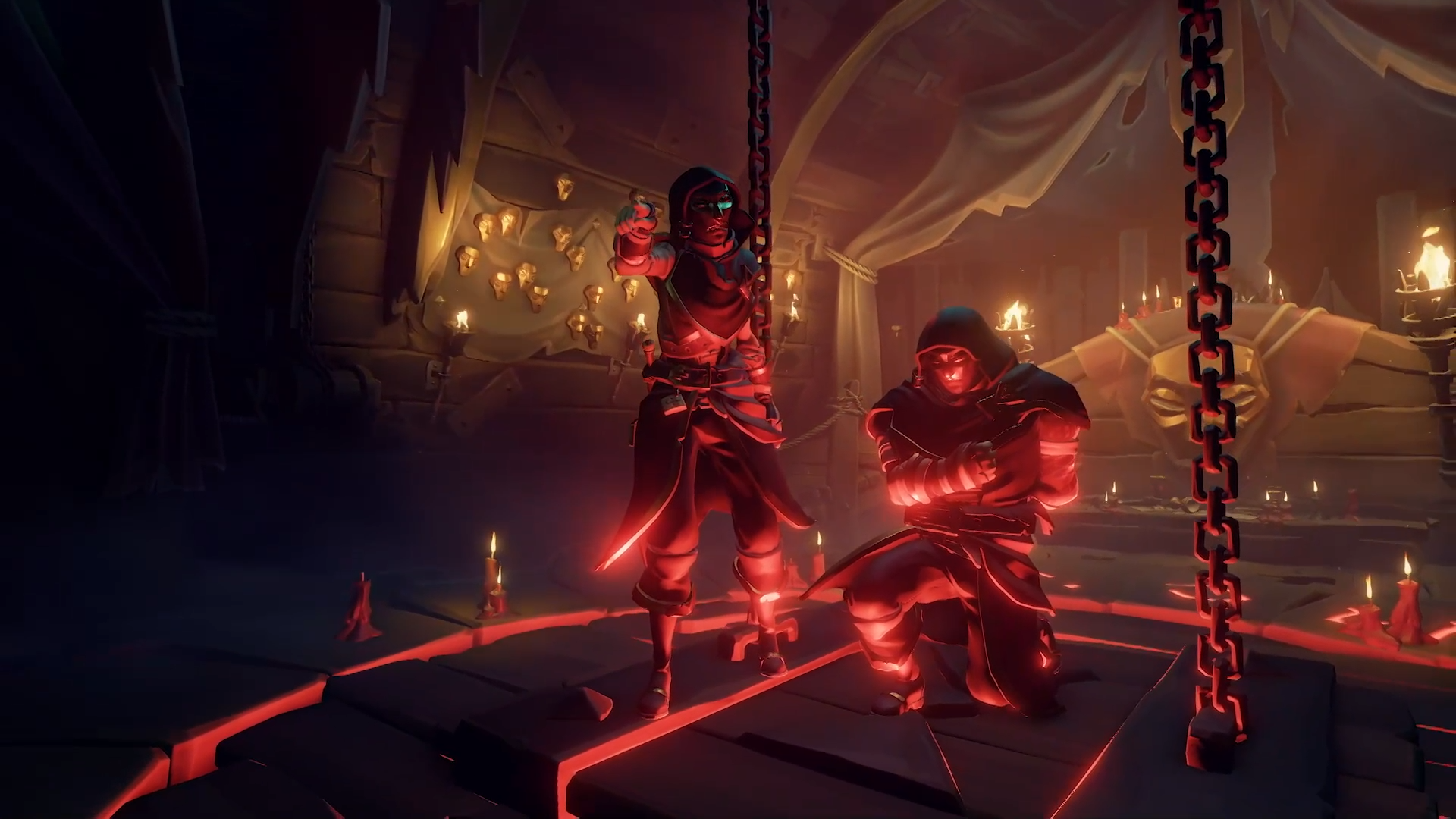 And you'll be able to do all this with a faithful kitty at your side! We've had an inkling they were coming to the game for a little while - there's images of the kitties in some of the early concept art for pets when they were first revealed. When the April update drops you'll be able to get yourself a feline friend to hang out with from Sea Of Thieves' premium in-game store, the Pirate Emporium.

Maybe I'm playing too much Animal Crossing, but I'm very excited about the prospect of collecting animals to hang out on my ship with me. Just like the monkeys and parrots, there'll be a few breeds of cat to choose from in a variety of different colours. There's other new cosmetic stuff coming to the Emporium, like new emotes and a ship livery set, but let's be honest, the most important take-away here is the cats. 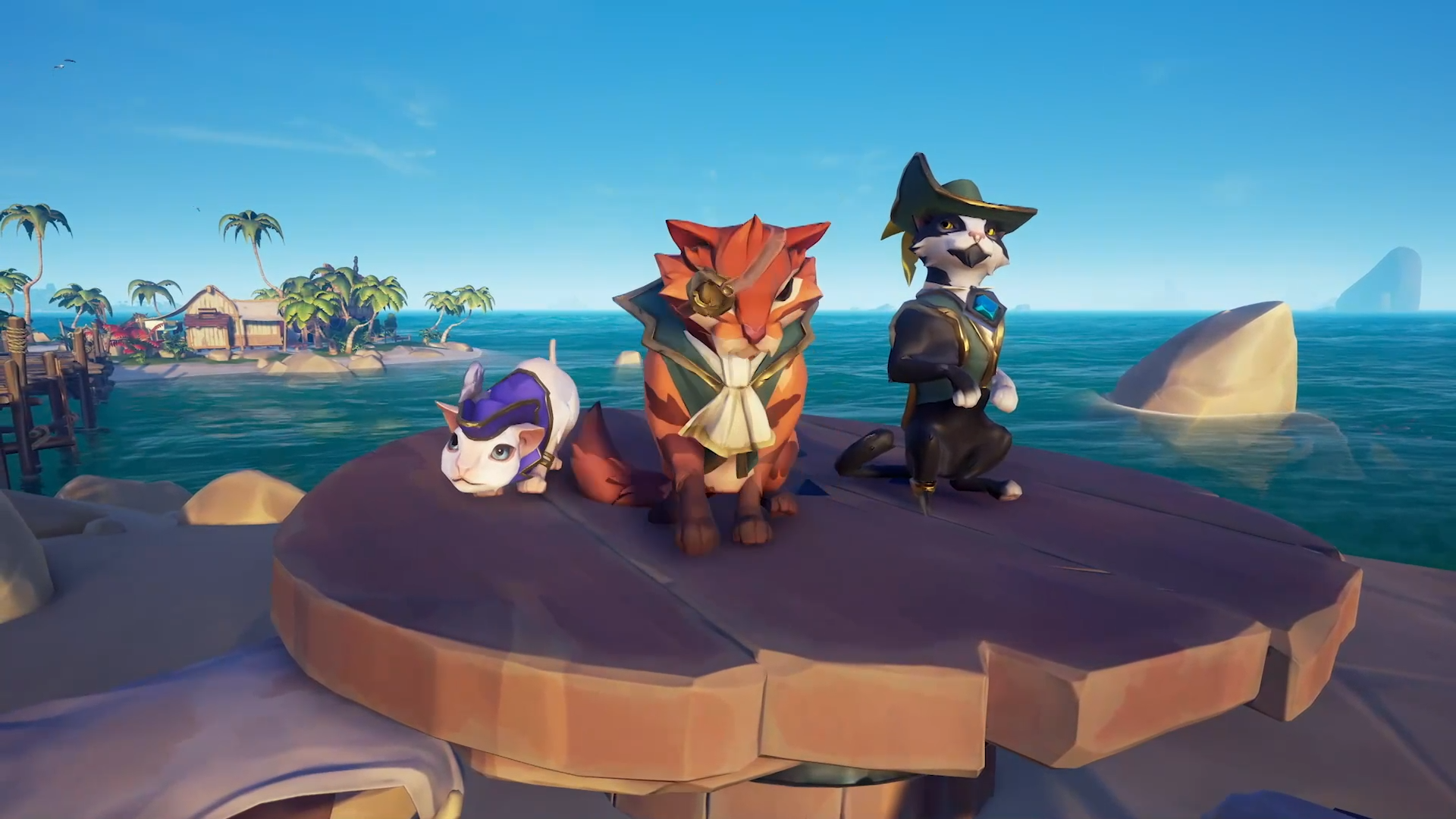 Rare have planned some updates for Sea Of Thieves' Arena mode as well. Now, rather than a load of treasure chests being buried across several islands, there's just one for crews to fight over. With only one place to cash-in said chest, and match times being been cut down to just 15 minutes it should make for a faster-paced (and slightly more stressful) experience. When your crew members die there'll be a short period of time where you're able to revive them, too.

The free Ships Of Fortune update goes live on April 22nd for Sea Of Thieves, which is available on the Microsoft Store and Xbox Game Pass.

Rare recently announced Sea Of Thieves will be sailing onto Steam sometime soon, and they confirmed there'll be cross play between Xbox, Windows and Steam too. Keep an eye on their shiny new Steam page for when they reveal the release date.