My own jury's still out on whether Rare's newly-released online pirate sim Sea of Thieves deserves to sink or swim, primarily because, during work hours, I either have to play with black-hearted randoms or solo. A little later in the week I'll be able to tell you all about how it shakes out with a full crew of trusted mateys, but for now I can tackle the question of exactly where on the sane>insane axis playing it solo lands.

The answer: pretty darned insane. It's frequently a horrendous experience - but at the same time, that is both entirely appropriate and oddly satisfying.

Core to Sea of Thieves' design is that almost anything we might take for granted in other mainstream games here involves an unusual degree of manual labour, meant to better evoke the there-but-for-the-grace-of-wood fantasy and to ensure constant collaboration between players. It's great in concept and early execution, though I have my concerns about whether it can stave off feeling tiresome in the long-term, and a suspicion that basic systems have been over-complicated to mask a lack of much else to do, but we shall see there.

So, for example, something as traditionally routine as working out where you need to go doesn't involve a mini-map on the corner of your screen, or even a pseudo-GPS in your inventory. It doesn't go as far as requiring you to use an astrolabe, but establishing where you are in the world does necessitate running from wherever you are to the ship's cabin and looking at the fixed map on its central table. This takes a few seconds, which is, trust me, more than enough for your ship to collide with a rock, turn wildly off-course or have a few holes shot in it by an opportunistic rival. 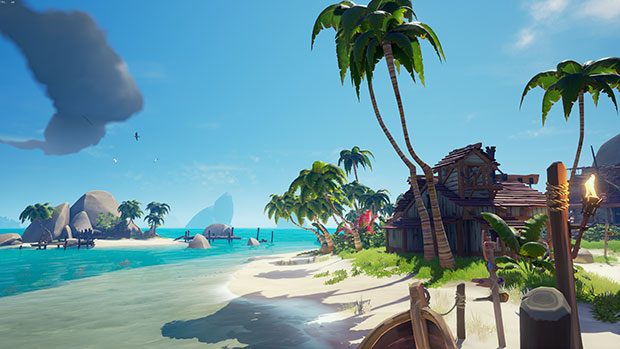 In co-op play, which is absolutely what Sea Of Thieves is designed for, navigation thus involves a kind of relay system. One player's at the ship's wheel, controlling direction. Another player's down at the map, working out where the ship is and where their intended destination is. Another player is in the crow's nest or or standing on the prow with a telescope, manually looking for the island they want to fetch up at or keeping an eye out for trouble.

As such, silence is very much not golden - the ancient art of chat is essential if you don't want to end up drifting in aimless circles. This is one of several reasons why I haven't found playing with random strangers to be particularly edifying to date.

(On the other hand, the moments of wordless collaboration, during combat or when the ship's taken damage, or simply playing the squeezebox to help pass a long trip, are my favourite moments in it, but more on that another time).

If you play solo, the only concession the game will make for you is to give you a smaller boat, the main benefit of which is that it simply takes a little less time to run frantically around it putting out fires. Or bailing out water, to be more precise.

Getting from A to B is a weird nightmare of scurrying back and forth between map and wheel, each time having to choose between the tedious safety of putting down then pulling up your anchor to spare you from collision or dift, or the high stakes gamble that nothing too heinous will happen during the 10 seconds or so before you're back at the wheel. 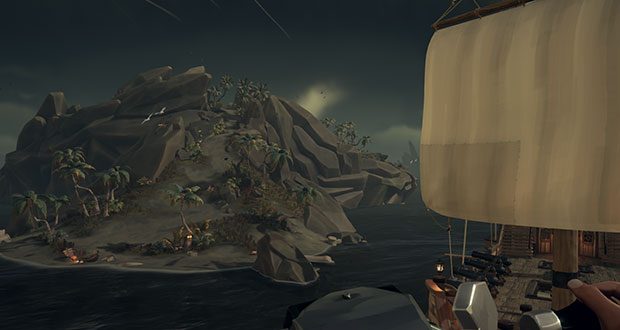 It's miserable. But it's miserable in the way that hauling a one-man sloop across the turbulent open sea in a pre-tech era would be. 50% of me is dying of frustration when I play this way, but 50% of me glows with weather-worn pride at even minor accomplishments.

This reaches an apex in a situation like this: because you also have to manually raise or lower sails to control speed, I bungled switching between wheel and sails yet again and approached an island too fast. The water turned shallow, there was a terrible grinding sound and two holes appeared in my hull.

As the cabin filled relentlessly with water, I first had to drop anchor (turn, turn, turn another wheel) and raise sails (pull, pull, pull a rope) before I collided with anything else. Then I had to spring about hammering planks over the breaches, and afterwards grab a bucket, scoop up water then hurl it over the side. When playing SOT the way it's meant to be played, you'd have a player doing each of those things in tandem and all you really have to worry about is wounded pride.

Unless that island happens to be a fortress, with cannons, which are manned by enemies. Or a ship full of other players happens to pass, who will quite naturally be hostile, given that the only thing less famed for hearts of gold than pirates are random internet people. In either situation, you've got to focus on getting out of dodge before - or if you have enough people, while - you do repairs and bail out water.

Imagine if that happens while you're playing solo. Just imagine. Imagine how it feels. The panic. The fear. Most of all, the fury. The moment I finish patching up one hole, two more appear. By the time I've thrown one bucketful of water overboard, I'm up to my ankles again. Back and forth and back and forth and back and forth, but what I need to do most of all is get the hell out of there, but how can I do that when the boat will surely sink during the time it takes me to drop the sail or raise anchor.

Open water which is still bursting into my boat with the unbridled force of a man making his first visit to the public conveniences after an 8-hour ride on a coach with no toilet. You don't get to relax when you're sailing solo, not ever.

And then I ran out of planks, and had to limp to the nearest island with an unrepaired hole in my deck, switching frantically between wheel and anchor and bucket and anchor and wheel all the way. Again, I made it. I have never been more relieved to see a two-by-four in my life. 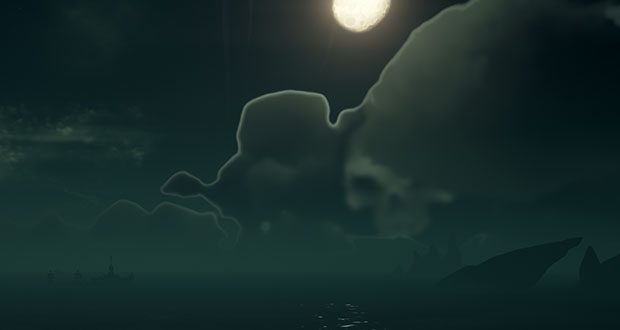 Best of all, I still had with the treasure chest I'd embarked on this series of misadventures to find in the first place. If I could just make it back to a pirate 'town' island, I could turn it in for a decent chunk of change. Playing co-op, you're generally supposed to rack up a bunch of these during one trip then turn them in all at once. I had spent a full hour and almost died more times than I could count just to find one, and boy did it feel like an enormous experience. Exhausting. Infuriating. Almost certainly not something I would want to try again on my own. But success was so, so satisfying: like I had won a war.

As the torches and candles along the settlement's shoreline flickered into focus, I closed my eyes, smiled my broadest smile and felt my heart swell with pride. I turned to drop anchor as I approached the jetty, and then the game promptly crashed.

Though I roared and swore at the skies, even that felt appropriate.