During your search for a flower for Lord Kuro in Sekiro: Shadows Die Twice, you'll venture into a forest that is populated with monkeys. A much larger ape sits in a lake, guarding the flower, and minding his own business. As soon as you approach, it suddenly becomes clear that this feral beast really doesn't want you there and will use any means to get rid of you - including throwing his business at you.

This guide will go through both phases of the Guardian Ape fight, how to avoid the attacks, and some tips to win the fight.

How to defeat the Guardian Ape

One item that will definitely help you is the explosive Prosthetic attachment. It will stun the beast for a short time, which will allow you to get a few solid hits in, as well as ramp up the posture damage. You'll want to get this phase of the fight over and done with as quickly as possible, so Ako's Sugar will also aid you in this endeavour. 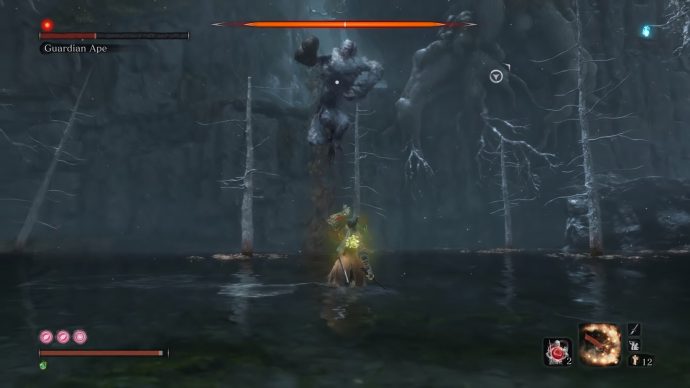 Run up to the Guardian Ape and begin swinging as soon as possible to ramp up the damage and posture break bar. He will begin throwing his fists at you, but most of these blows can be deflected if you have the right timing. If he ever falls on his back, step away an either stand near his feet or head as the arms will begin thrashing around like a toddler with a temper tantrum.

If you ever see the unblockable symbol, make sure you're far away as it can grab and slam you into the murky swamp. This does far too much damage to risk any sneaky hits, so just run and dodge when you see it. Trust me, you don't want to get grabbed.

Getting greedy with your attacks against him can be perilous as his farts inflict poison damage. He'll usually do this when you've been hitting him near his exposed buttocks. The gas cloud will linger for a while so get out as soon as you see the noxious fumes. Antidotes are good for this part of the fight, but there's also an item that inflicts a weak poison on consumption that could be a handy way to avoid stronger poison status effects.

The arena is quite large and there are a ton of trees that can be grappled on. These are mostly used to get out of danger when the Guardian Ape decides to leap into the air and fling its poo at you - like monkeys do. If it hits, it'll do a lot of damage and almost instantly poison you, so make sure you're not in the impact zone. After whittling his health down, you can use the sword embedded in its neck to inflict the deathblow. Celebrate, because you are victorious. Honest. The "Shinobi Execution" thing says so! 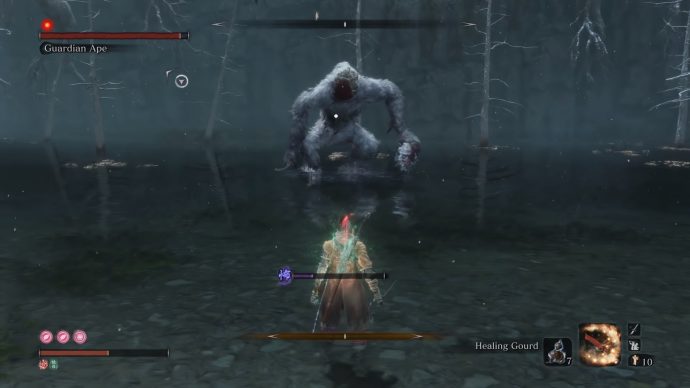 How to defeat the Headless Ape

He's not quite dead! After grabbing his head and the sword, the now headless ape will begin attacking once more, having a completely different set of attacks. You won't get a chance to fully recover your health either, so it's best to try and minimise the damage where possible. You can use the time that he is prone to use any healing items needed, but don't dawdle. If you consumed the weak poison for the previous phase, you can now use an antidote as this section of the boss doesn't have any poison attacks.

What it does have however, is a terrifying scream. If you ever, ever, see it raise its hand that's holding its head, run far away. This monkey's yell has a surprisingly large range, surrounding the ape and if you're caught inside, you'll steady incur terror and physical damage. Terror will instantly kill you if it is ever filled up.

Even though the "Headless Ape" has that more ridiculous attack that can instantly kill you if you're not careful, the rest of his sword swings are surprisingly predictable, if slightly unorthodox. Most of them can be deflected, but there are a few that are unblockable that you just need to jump over, as all of them are sweeps.

He also has an attack that is a great window of opportunity. When it dives towards you and swipes, jump over and attack a few times. This is not the same as the unblockable swipe. When he dives, jump up towards him and attack him as you land. Provided you just miss the blade, you can get several hits in.

Once you've dealt a second deathblow, this boss will be defeated. It's not the final time that you'll fight this one though as you'll fight it again in the area close to the bottomless pit. Check out our Sekiro: Shadows Die Twice Headless Ape guide for the differences between this fight and the previous one. You can also look at our Sekiro: Shadows Die Twice Folding Screen Monkeys guide for the previous encounter.