Did you pick up the set of bells from an old woman not too far in from the beginning of Sekiro: Shadows Die Twice? If so, you'll be asked to head to the shrine and use them. This will cause the wolf to remember an incident where his master's home is ransacked by bandits. Making your way deeper into the fiery inferno, there's a bunch of goons in your way. One of the larger ones is Juzou the Drunkard and to win the day, you'll need a plan.

To help you fight well against this giant intoxicated lad, our guide will go over the attacks he can use with his very large sword, why the spew is poisonous, and how an ally is hiding in the shadows.

How to kill Juzou the Drunkard

With two health stocks, Juzou can be a little daunting to face alone, but his allies make the battle a full on skirmish. You should therefore prepare in advance by flanking around the side while still trudging through the pond, until you come across a shack. Kill any enemies inside and move around, being careful not to get spotted. It'll come out by one of the shield enemies, who you can get a quick kill on before alerting the others. From there, you'll need to herd all of them so that you can single out the archer and shielded soldier. Kill the archer and use the Axe prosthetic to break the wooden shield. From there, kill all the regular enemies before making your escape back towards the pond. 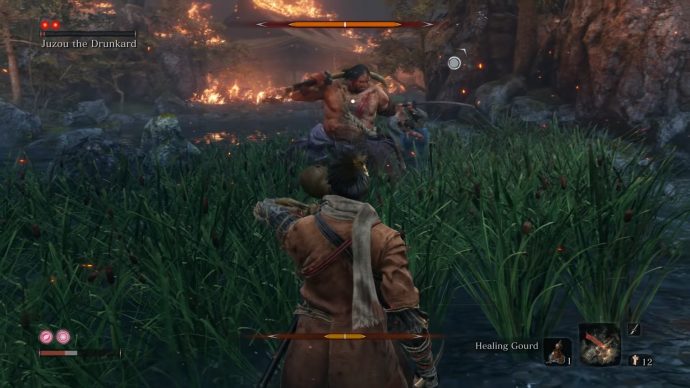 The idea is to lose Juzou's attention, so when you see a yellow triangle, he'll start actively looking for you, rather than chase you. Eventually though, he'll lose interest and head back to the centre of the courtyard. Try to sneak up behind him and stab him in the back to immediately take a stock. He'll regenerate health if you lose his attention now, so head back to the water to find a random NPC. Talk to him fully and he'll charge right into battle. A "many versus one" scenario in his favour, just went to a "two versus one" in yours if you did this right.

As for his attacks, he has various swipes that can mostly be blocked or dodged.He can also thrust his non-sword hand multiple times, which if you block rather than deflect will reduce your posture a significant amount. It's better to dodge this as it's far simpler to avoid by side stepping. He does also have a couple of unblockable attacks. If he raises his free hand while the unblockable symbol appears, he's going to try and grab you, so make sure you dodge it. If he withdraws his sword instead, it'll be a sweeping attack, leaving him open to a dive kick. The vomit that he emits is poisonous, so don't venture too far away from him as he'll prioritise using this spew cloud to intoxicate you. If you ever see him drinking, this is when you need to attack him, otherwise he'll recover his posture.

If you want a much easier time of it, try not to actually do anything to Kill all his friends first, then retreat to the water. If you can time it right, you can sneak up behind him as he is going back to his spawn point and take off one health stock. As soon as you do this, talk to the friend by the river and cycle through his dialogue quickly. Suddenly it becomes a 2v1 scenario. Attack the Drunkard while he goes for your friend and dodge when he is attacking you. It shouldn't be too tricky and you may even keep your friend alive. Winning will give you Unrefined Sake, which you should save for a certain point in the story. You'll also get a small 212 experience points and some valuable prayer beads which you can use four of them to upgrade your vitality.